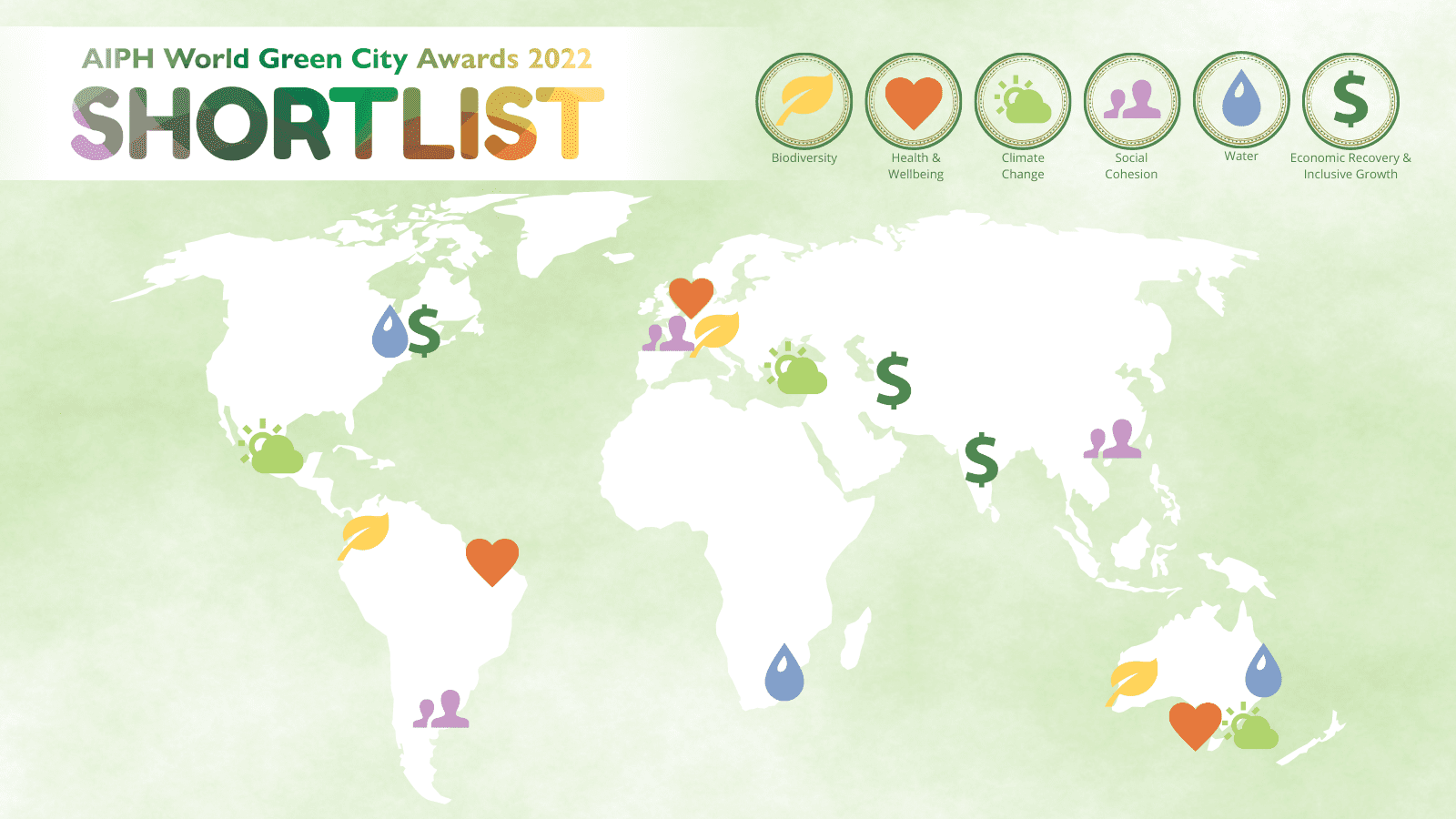 The International Association of Horticultural Producers, AIPH, is proud to announce the shortlist of eighteen entries from cities around the world for the first edition of the AIPH World Green City Awards. In each of the six Awards Categories, the Technical Panel of Judges selected the three top scoring entries for this prestigious list.

“We are thrilled to be showcasing excellence in city greening from cities around the world,” said Tim Briercliffe, AIPH Secretary General. “As we reach this very exciting milestone, AIPH is confident that the first ever AIPH World Green City Awards is a resounding success, leaving a legacy that will shine through in future editions. Congratulations to each and every one of the shortlisted cities. We proudly celebrate this amazing achievement with you.”

The 2022 AIPH World Green City Awards Shortlist of entries per category is proudly announced as follows:

Living Green for Health and Wellbeing

Addressing the medical, behavioural, and social determinants of health for residents

Ensuring that water resources are safeguarded and wisely used, with clean water available to all while also protecting residents from flooding risks

Fostering belonging, trust and inter-generational as well as cross-cultural relationships to prevent exclusion, marginalisation and violence

Socio-urban integration in the midst of an ecological reserve: The case of Rodrigo Bueno, City of Buenos Aires, Argentina

The 2020-2030 Master Plan for the Conservation, Improvement and Development of Parc Jean-Drapeau, City of Montreal, Canada

Transformation of “Beltway to Green Belt”, City of Mashhad, Iran

Green Necklace to the State of Telangana, City of Hyderabad, India

The shortlist of entries is presented on behalf of the Technical Panel by the six Category Leads to the 2022 Awards Jury who will identify one winner for each category, as well as the overall AIPH World Green City Awards 2022 winner.

“After reviewing the submissions for the AIPH World Green City Awards 2022, I was amazed at not only the commitment to building green cities but the creativity and expression of local culture that was at the core of the submissions,” said Grant Pearsall, Urban Ecological Planner, Edmonton, Canada (Technical Panel member).

“The spread of very different entries is an indication of the wide range of initiatives, with plants at their heart, that are addressing the multiple challenges cities face due to climate change and the ecological emergency. This initiative by AIPH encourages cities to demonstrate the range of innovative urban nature-based solutions that are possible,” commented Marcus Grant, Editor-in-Chief, Cities & Health (Technical Panel Category Lead, Health and Wellbeing)

Each eligible entry was assessed and scored by members of the Technical Panel against the following judging criteria:

‘To create a healthy and happy urban life we need to include plants and nature in our cities. The 2022 entries for the AIPH World Green City Awards show that cities are taking action to showcase the value of living green. This is truly an inspiration for many other cities,’ said Judith van der Poel, Director, Niek Roozen Landscape (Technical Panel member)

To learn more about the exciting initiatives by the shortlisted cities, click here.

Looking ahead, AIPH will profile city entries as case studies to inspire other cities around the world to take action for plants and nature. AIPH celebrates each and every city entry as a leader in urban greening, and a champion of the green city principles.