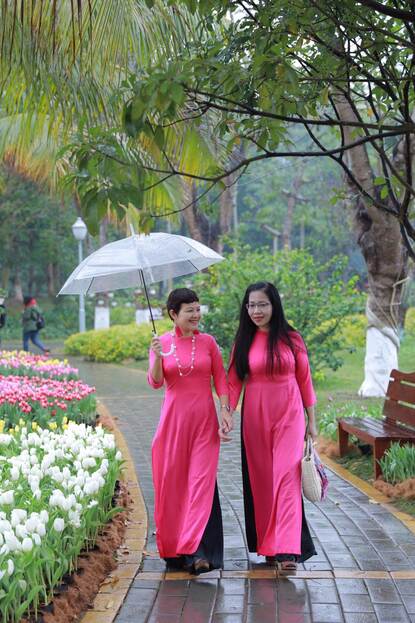 HANOI, Vietnam: Thousands of people visited the first ever Dutch tulip festival in Spring Park at the EcoPark urban township on the outskirts of Hanoi from 28 December 2018 to 1 January 2019.

The tulip festival is the last event in a series of activities held to celebrate the 45th anniversary of relations between Vietnam and the Netherlands.

With over 180,000 tulips planted on an area of more than 1,500 sqm, a vast carpet of colours (yellow, white, pink, red, purple and orange) at Spring Park recreated the famous Keukenhof park in the Netherlands – known as one the most beautiful flower displays in the world.

Tulip varieties included Christmas Dream, Strong Gold, Verandi, White Prince, Negrita Zeeland and Tom Pouce. All were imported directly from the Netherlands and first planted in Sapa, where the climate and environment are similar to Europe, to ensure growth. After being cared for by agricultural experts, the flowers were ready for the colourful festival.

Along with tulips, the festival also featured other special characteristics of the Netherlands, such as exhibition displays of wooden clogs, art masterpieces from legendary Dutch painters including Rembrandt, Van Gogh, Johannes Vermeer and Piet Mondrian. Visitors also had the opportunity to see women in traditional Dutch costume, a six-meter-high model windmill, replicas of houses alongside canals in Amsterdam as well as music shows, street arts and Dutch folk games.