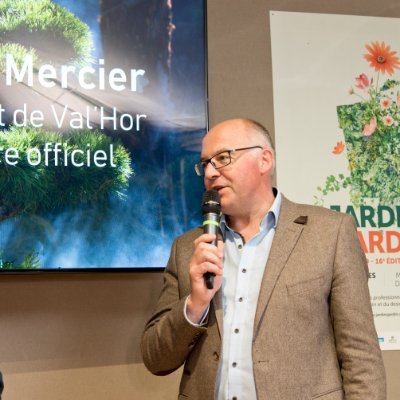 PARIS, France: Mikäel Mercier is in hospital following a car crash in Mayenne. The president of France’s trade association for ornamental horticulture was on his way to the Elysee Palace to attend the traditional Lily of the Valley ceremony and lend his valuable support to the country’s floriculture industry.

In his May Day speech France’s president Emmanuel Macron- following a meeting with French horticulturists – wished Mercier all the best and a speedy recovery while also referencing the tough experiences the French florists are currently going through. (video 3:51 in French language only)

The French government’s decision to allow florists to temporarily open their shops on May Day to sell lily of the valley (Convallaria majalis) flowers, was hailed as a victory for the France’s ornamental horticulture industry and Val’Hor’s .

There’s been a raging debate between the government and the horticultural sector over who should be entitled to sell France’s quintessential May Day flower – essential retailers only or retail florists also.

The government opted for the retailers but reconsidered its decision by giving retail florists the permission to temporarily open their shops on May Day, also known as la Fête du Travail in French.

The Elysee’s move is a symbolic one as many retail florists felt discriminated against by the government during the coronavirus lockdown, regardless of the fact that the Labour Day lily of the valley flowers represents an annual turnover of 22 million euros.

Val’Hor in collaboration with the Fédération Française des Artisans Fleuristes and U2P called on the government, stressed that even this sales figure is small in comparison to the record losses of €14 billion the country’s ornamental horticulture industry is suffering, the lily of the valley victory is essential as it offers the country’s retail florists some relief.

Earlier this week, the government announced that the opening of all flower shops would happen on 11 May, after the easing of the country’s lockdown.

Meanwhile, Val’Hor spokeswoman Jeanne Defever says that Mercier has no injuries of deep concern. In a message from his hospital bed, Mercier says he is getting on ok, thanks President Macron for his message of goodwill and adds that it is the industry that needs support in the first place.