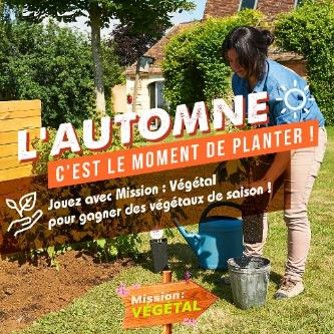 PARIS, France: Autumn is the perfect time for planting;  autumn foliage colours galore and soil temperatures are still warm enough to encourage root growth. That is the latest message from VAL’HOR, the umbrella organisation for ornamental horticulture in France (regrouping all trade unions from the ornamental sector, from growers to retailers, landscapers, and florists).

The core message of the French industry body is that autumn is one of the best seasons to garden. And the French are well aware of the reasons why.

Recent Kantar research commissioned by VAL’HOR and FranceAgrimer uncovers that 4.24 million  households (that is 15 percent of its total) purchase bulbs, perennials, biennials, trees and shrubs for autumn planting, worth €160 million (All Saint’s Day purchases not included).

A further 69 per cent of French shoppers know that fruit trees should be planted in autumn. 66 per cent know that planting time for bulbs is usually late Autumn while 63 per cent wait until autumn before planting their hedges, autumn flowers and foliage, and climbing plants.

A firm favourite with French consumers are roses as the research found that roses are the second most popular plant bought during this season, especially if they are bare-rooted, as French perceive them as more robust.

A la Sainte Catherine, tout bois prend racine, is a French proverb to explain that at ‘Saint Catherine’s Day, all wood takes root’. No less than 85 per cent of buyers recognise the benefits of this saying, which is linked to good plant growth, and 52 per cent of French shoppers act accordingly by taking up their spades.

The ‘Plant it this autum’ campaign targets the general public. Beyond its educational value, the messages highlight the physical and mental health and well-being that plants provide, a  message to which the French should be particularly sensitive, knowing their increased concern about environmental issues, their health and well-being since the global health crisis.