The trials at two German seedling nurseries have shown it is possible to use the additive to produce reliable blocks with a white peat content of at least 50 per cent or with a high proportion of other alternative substrates.

A long-established supply chain for propagating and planting seed-raised young plants has grown up around the unique properties of one particular growing medium – the so-called black peat used in blocks or ‘press pots’. Raising in blocks means growers can plant out by machine and without disturbing the roots.

The material is drawn from the lowest layers of a peat bog, it’s the most highly decomposed of all peats and has been formed over hundreds of years under pressure from the weight of the layers above, making it very compact and the remains of the plants it’s formed from are barely recognisable. 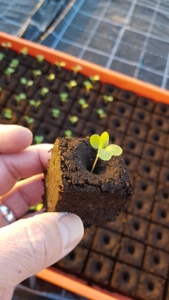 The additive is 100 per cent biodegraded after trans­-planting.

For blocking compost, black peat’s fundamental property is how well it holds together when wetted up and pressed. Yet, it still retains good air- and water-holding capacity and is much less prone to shrinkage than younger peats. Propagation blocks rely on it for their integrity – once formed into blocks, it holds its shape even during the considerable stresses of mechanical transplanting. Blocking substrates traditionally contain at least 80%, and often 100%, black peat. Anything less and the blocks’ durability suffers.

But with increasing restrictions on peat use and availability around the world, black peat, in particular, is becoming ever-harder to obtain. For example, in Germany, once a significant source of raw peat, no new deposits are being released for extraction.

Climate change is playing a part, too, in some regions where black peat is extracted. Milder winters make it difficult to expose fresh-dug black peat to freezing weather – a key part of the production process that helps the substrate resist shrinkage and optimises air- and water-holding capacity. It’s possible to achieve the same qualities without freezing but at a higher cost.

Farms and nurseries under pressure to switch to alternatives

Meanwhile, an increasing number of countries are restricting peat use in response to environmental concerns and farms and nurseries are coming under pressure to switch to alternatives, especially those growing to organic certifications.

Peat substitutes have been proven in substrates for an expanding range of crops from bedding plants to strawberries but a blocking medium’s unique requirements mean that despite considerable research it has been difficult to reduce the proportion of black peat and still create a block that works under growers’ current production systems.

One company that has is Dutch growing media manufacturer BVB Substrates which based its BVB Impress medium on younger ‘white’ sphagnum peat. The company says it’s made ‘without any chemical additives and will still hold its integrity during mechanical handling.

Thomas Förster of Floragard’s horticulture department says trials over the past two years at two German seedling nurseries have shown it is possible to use the additive to produce reliable blocks with a white peat content of at least 50 per cent or with a high proportion of other alternative substrates.

“We have tested blocks with up to 70 per cent white peat, which met the requirements,” he says. “A substrate containing 35 per cent alternative constituents was also tested in a company that produced seedlings in press pots that met the criteria for organic growing. Neither serious changes in crop management nor significant technical changes to the press-pot machines had to be made by the grower.

“Young plant growth has been completely normal in all trials so far and comparable to the growth in conventional substrates for compressed pots. In some cases, there was even improved root growth, due to the higher air content in the substrate.

“Trials with 50 per cent peat-reduced substrates are also currently underway on an organic farm and the results are promising.” 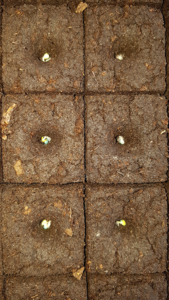 Young plant growth has been completely normal in all trials so far and comparable to the growth in conventional substrates for compressed pots.

The advantages of press-pot production are likely to remain

Förster says further trials aim to optimise incorporation rates and effectiveness in combination with additional substrate ingredients. When ready to be marketed, the company will supply blocking media with the additive already incorporated for growers to produce their own blocks in the usual way.

“The only difference [compared to conventional blocking media] is it will require 10-20 per cent more water before the block-pressing process,” he says. “We have stored substrates containing Flora Eco-Glue for up to eight weeks in trials without its performance being affected. But the additive is 100 per cent biodegraded after transplanting.”

Förster stresses the additive is quite different from the binding agents used in the pre-formed polymer-bonded plugs familiar to those who propagate and grow bedding plants and some other ornamentals from seed or cuttings, which have to set dry and are supplied ready to use.

“Companies producing and planting young plants in blocks or press pots have a considerable investment in production processes based on substrates predominantly containing black peat, and where block making and sowing is done by the propagator,” he says.

“While alternative substrates will increasingly have to be used, our trials suggest the advantages of press-pot production are likely to remain.”

The horticulture industry requires good quality, consistent growing media that is available at a good price. The use of peat is increasingly challenged by governments and NGOs around the world as part of the battle against climate change.

Find out what the global industry thinks and join in the conversation on 18 May in the ‘Sustainable Growing Media’ webinar from 3pm to 4.30pm CEST. Register, free-of-charge today http://bit.ly/GrowingMedia.