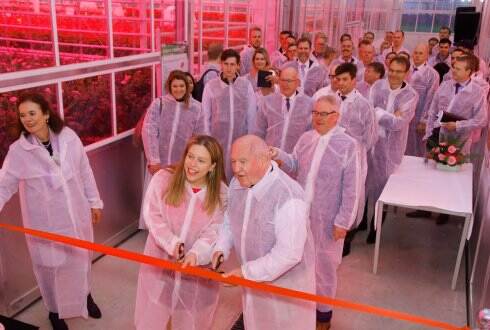 Funded by the Dutch Ministry of Agriculture, Nature and Food, KAS2030 is an all-electric carbon neutral demonstration greenhouse use for the carbon neutral production of fresh produce, fruit and ornamentals. The greenhouse structure combines cutting edge technology and cultivation systems to reduce carbon emissions and the use of artificial fertilisers and crop protection products to zero.

Disease and plagues are combatted biologically based on the so-called ‘standing army’ approach.  Furthermore, water and nutrients are recycled to their fullest potential to achieve zero-emission levels of nutrients and pest control agents. As such, the greenhouse is a shining  example of Minister Schouten’s strategy towards circular farming.

Project manager Frank Kempkes commented of the current research underway in KAS2030, which is funded by the Greenhouse as Energy Source (Kas als Energiebron) programme. Secretary Perdue noted Dutch innovations are increasingly finding their way to the United States. For example, all of the companies involved in creating the greenhouse are also involved in a large number of horticultural projects in the United States. Following the official opening, the delegation toured three other cutting-edge innovations: The combination of fish farming and lettuce cultivation on water, the ‘winter light greenhouse’, and the cultivation of raspberries under LED lights.

Perdue’s visit also served to strengthen the agricultural  ties between the Netherlands and the USA. The two ministers showed great interest in the innovations in the field of efficient and sustainable food production in greenhouse horticulture presented by WUR and their partners in the trade and industry sector.

During the visit, the ministers were given a literal taste of sustainability, as both received a carton of fresh strawberries cultivated in KAS2030 upon departing.