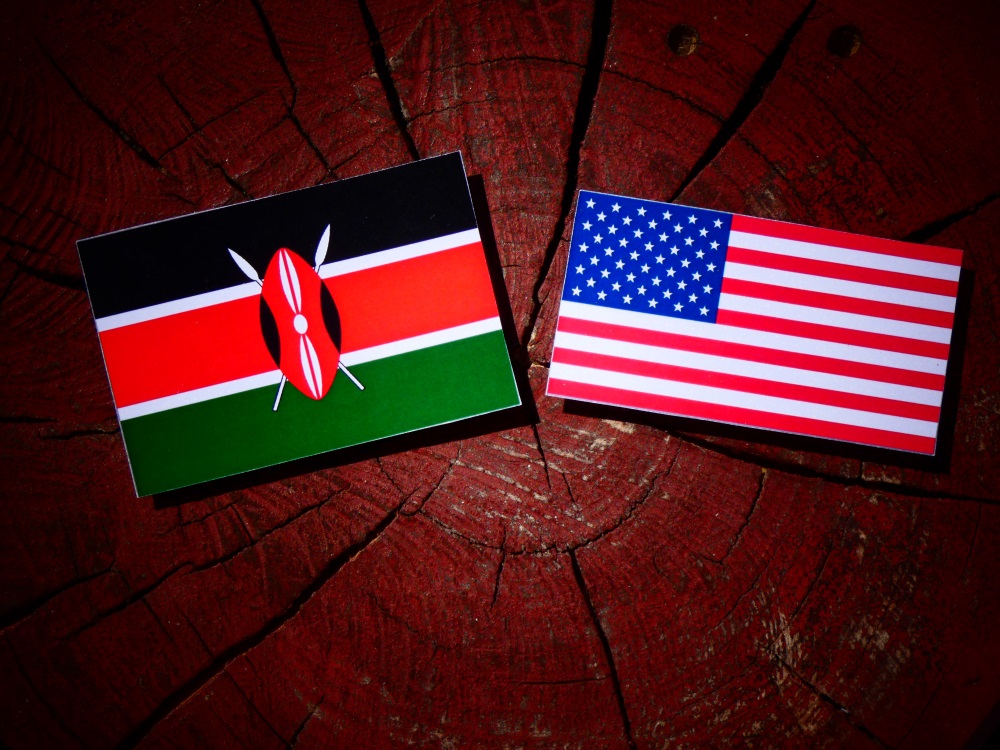 Kenyan flag with USA flag on a tree stump isolated

“Kenya is a recognised leader across the continent, an important strategic partner of the United States, and there is enormous potential for us to deepen our economic and commercial ties,” said Ambassador Lighthizer.  “Under President Trump’s leadership, we look forward to negotiating and concluding a comprehensive, high-standard agreement with Kenya that can serve as a model for additional agreements across Africa.

“We believe this agreement with Kenya will complement Africa’s regional integration efforts, including in the East African Community and the landmark African Continental Free Trade Area (AfCFTA), and the United States pledges its continued support to help the AfCFTA achieve its fullest potential.”

Cabinet Secretary Maina said, “Kenya and the United States have strong trade relations demonstrated by growing exports and imports which have increased over the years.  The United States of America is a significant destination market for Kenya, a position that has been sustained over the years after the East Africa Community (EAC), European Union (EU) and Common Market for Eastern and Southern Africa (COMESA).

In light of the ongoing global pandemic caused by COVID-19, the first round of negotiations is being conducted virtually, with the U.S. and Kenyan negotiators engaging in discussions over the next two weeks in multiple negotiating sessions covering all aspects of a comprehensive trade agreement.

The United States and Kenya share a deep and enduring relationship that encompasses longstanding social, cultural, economic, and political ties.  Both countries have worked closely together to strengthen agriculture, protect wildlife, improve health and welfare, assist in civic education, and combat the scourge of terrorism.

In 2018, President Donald Trump and President Uhuru Kenyatta elevated the U.S.-Kenya bilateral relationship to a strategic partnership, and established a Trade and Investment Working Group to explore ways to deepen the trade and investment ties between the two countries and lay the groundwork for a stronger future trade relationship.  In 2020, the two presidents agreed to pursue closer economic ties through the negotiation of a free trade agreement.

The United States and Kenya seek to conclude a free trade agreement that will complement regional integration efforts within the East African Community (EAC), as well as the landmark African Continental Free Trade Area.

The two countries recognise that an agreement between them has the potential to serve as a model for additional agreements across Africa, including with other EAC partner states.

In addition to the launch of trade negotiations, the United States and Kenya agreed on a Strategic Cooperation Framework to provide technical assistance and trade capacity building in Kenya with the aim of maximising Kenya’s utilisation of the African Growth and Opportunity Act trade benefits for the remaining years of the preference programme, which is scheduled to expire in 2025.  The Framework will also support the development and competitiveness of key agricultural value chains in Kenya.

The United States and Kenya intend to intensify efforts to bolster commercial cooperation under the bilateral commercial Memorandum of Understanding signed in June 2018, and to work together to identify and prioritise trade and investment opportunities in strategic sectors including energy, health, digital economy, infrastructure, manufacturing, and agriculture.

Both governments are committed to a successful outcome that makes workers, farmers, and business people in both countries more prosperous.