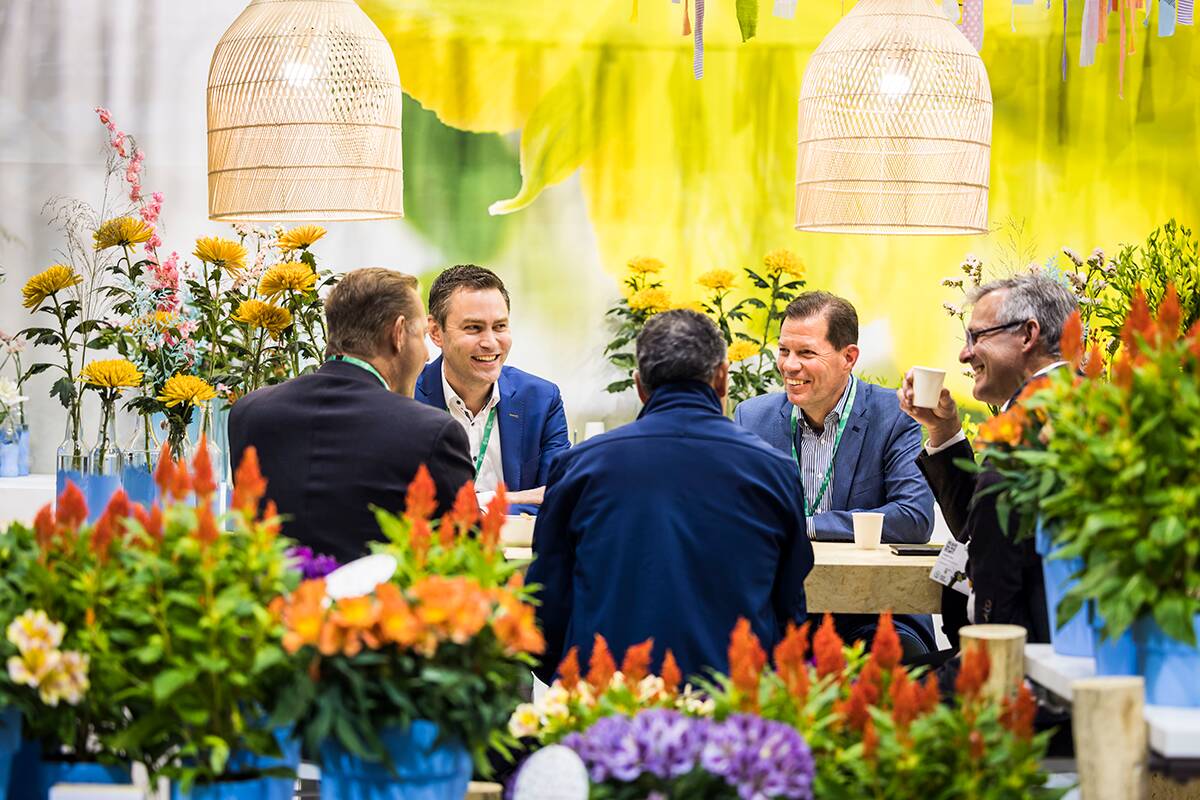 Royal FloraHolland’s iconic Trade Fair Aalsmeer is open for business from 9 to 11 November 2022. Three unmissable days and the latest in plant breeding filling a 25,000m2 floor. register now for swift entry for the event’s days at www.tradefairaalsmeer.royalfloraholland.com

The forthcoming Trade Fair Aalsmeer offers a fantastic opportunity to browse and buy from the world’s largest selection of plants and flowers brought together under one roof by Royal FloraHolland. Dutch potted plant growers will dominate the 25,000 m² show floor, bringing their staple ornamentals, such as potted Phalaenopsis, Kalanchoe, and potted roses, as well as exciting niche products, under the attention of a global audience. Truly an international event,

Trade Fair Aalsmeer welcomes many foreign visitors each year, with Holland’s near neighbours well-represented. And, walking the busy aisles, it is not uncommon to hear German, Italian, Spanish or even Polish. Up to 30 per cent of the show’s attendees come from abroad and frequently include Dutch floral wholesalers accompanied by their foreign customers.

At TFA, you’ll find camaraderie, team spirit and floral innovation ready to keep morale high, even amid our industry’s challenges. 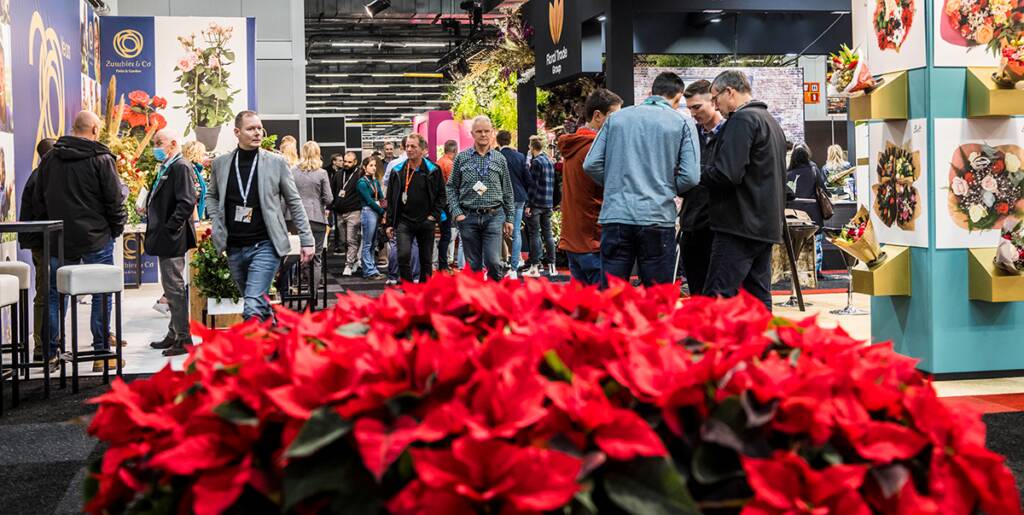 The 2022 Trade Fair Aalsmeer will see crowds once again in the aisles.

Wilma Kofoed, who has helped organise Trade Fair Aalsmeer since its inception in 1999 and for eight years, oversees the overall management and coordination of the event. She candidly admits that in May – when exhibitor registration for Trade Fair Aalsmeer opened – she signalled “something impactful was going on”. 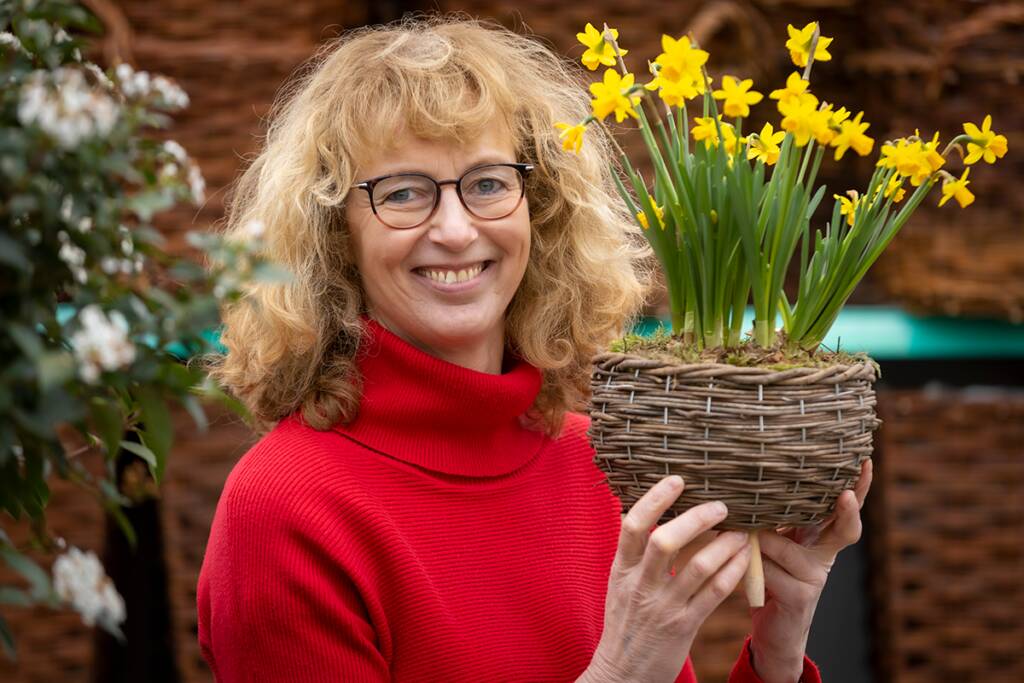 Wilma Kofoed has overseen the overall management and coordination of the Trade Fair Aalsmeer for eight years.

One year ago, a greenhouse grower used to pay between 0,70-€1 per cu m. The most recent quotes have seen the cost jump to €1,70-€2 per cu m. Horticultural consultants say the break-even for greenhouse production of flowers and plants is at a gas price between 35–40 cents per cu m. They warn greenhouse businesses of a rocky road ahead. Especially among those who didn’t negotiate fixed-price contracts, there are fears that higher prices could force them to close. Growers with a co-generation plant who sell electricity to the grid seem to have a better competitive edge but equally prepare for distress as the winter approaches. Nowhere else in Europe are gas quotes as crazy as in the Netherlands. Glastuinbouw Nederland, the industry body for greenhouse horticulture, has calculated that all Dutch consumers’ gas bills amounted to €8 billion at a gas price of 0,20 cents. At a gas price of €2, that figure will rise to €80 billion.

“It’s tough to foresee what the future holds, but growers will have to make difficult decisions about whether they plant less, switch off the lighting, opt for less energy-demanding crops or stop their company altogether,” says Kofoed. The impact of the energy crisis has already seen several Dutch flower and plant growers go under. And the winter is only just begun.

BLOOM, INSTEAD OF GLOOM

Royal FloraHolland defends the interests of its member growers. It is teaming up with a broad coalition of industry bodies, wholesalers, florists, garden centres and the Netherlands’s leading employers’ organisation, VNO-NCW. More recently, the auction’s CEO, Steven van Schilfgaarde has urged the Dutch government to tame the sky-high energy prices, which will undoubtedly be the subject everyone will be talking about at our forthcoming Trade Fair Aalsmeer. Kofoed says: “While on the corporate level all efforts are geared towards an aid package for the sector, we as organisers of Trade Fair Aalsmeer will not specifically cater for energy-related conferences, seminars, or workshops. We believe the event’s primary role is to bring members of our industry together to display, demonstrate and discuss the latest products and services. And to bring supply and demand together. Moreover, I think there is some crisis fatigue among growers. They may be happy to talk about something other than crazy energy quotes. As such, the event will offer growers and traders a three-day escape from life every day’s demands. The kind of escape that will focus on bloom instead of gloom.”

Now in its 23rd year, Trade Fair Aalsmeer is blooming – literally. It has blossomed from a modest wholesale plant sale event in 1999 on Bloemenveiling Aalsmeer’s ground floor – coinciding with the Bloemenvaktentoonstelling’s last edition on the auction’s upper floor – to become one of Europe’s leading horticultural trade shows.

But ornamental horticulture is an international affair, so Trade Fair Aalsmeer welcomes between 60 to 70 exhibitors from abroad each time. This year, the anticipated 17,500 trade visitors – wholesalers, garden retailers, supermarket purchasers, florists, mass merchandisers and event planners – can expect to see flower and plant suppliers from Germany, Belgium, Denmark, Kenya, Ethiopia, Colombia, Ecuador, Chinse Taipei, and Türkiye. The latter will debut at Trade Fair Aalsmeer through the Turkish Ornamental Plants and Products Exporters Association –aka Turkish Flowers- which has booked a 60m2 stand in the cut flower area. Turkish Flowers’ goal is to remind its key customers that Turkey remains a strategic and dedicated exporter of flowers and plants to European customers, who trust Turkish flowers and plants as a quality and sustainable choice. The Taiwan Floricultura Exports Association will also be prominently present at this year’s show in Aalsmeer. 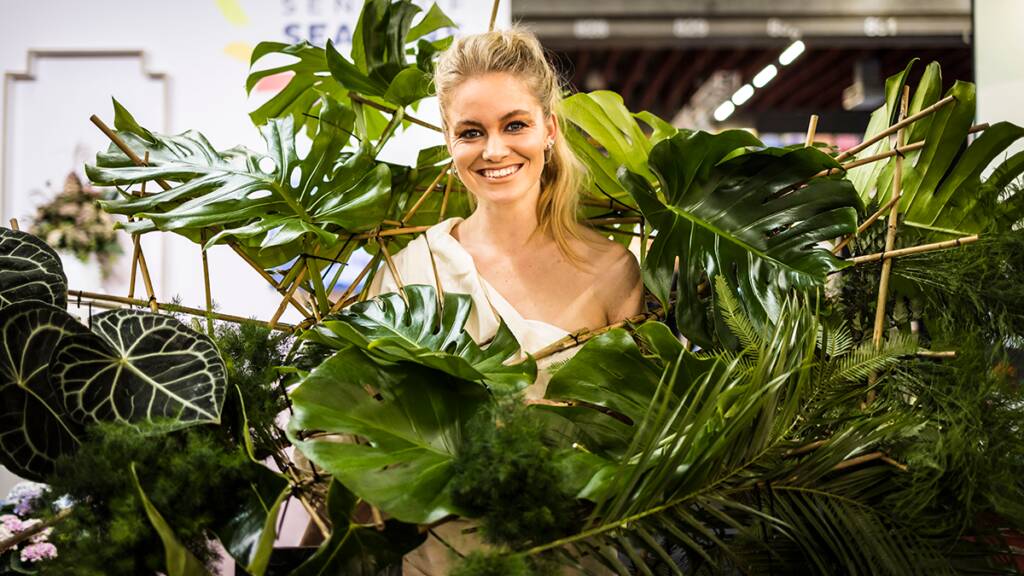 The show features 25,000m² of show space and more than 552 exhibitors. The major categories that appear at the show include houseplants (50 per cent), cut flowers (25 per cent), and breeding, trade and horticultural services and supplies (25 per cent).

“The cut flower category will see a 10 per cent drop in exhibitors due to the energy crisis. We are fully aware that energy prices and the cost of all other commodities have risen in recent years. That is why we offer growers a slimmed-down and cheaper presence at Trade Fair Aalsmeer. If you haven’t booked a stand but have an interesting product to showcase, you can opt for a spot in the two ‘In the Picture’ pavilions in the cut flower and houseplant area, respectively. We will ensure that your product is presented professionally and that you can meet and greet international visitors at the square on Wednesday and Thursday.”

True to tradition, host Royal FloraHolland will show some good Aalsmeer hospitality in its Holland House, at the heart of the trade fair.
The auction’s employees will be involved in various tasks, from account management to looking after the stand holders and updating grower members.
With 35 per cent of direct trade realised through its digital sales platform Floriday, Trade Fair Aalsmeer is ideal for updating growers and buyers about the system’s new functionalities, including Explorer. 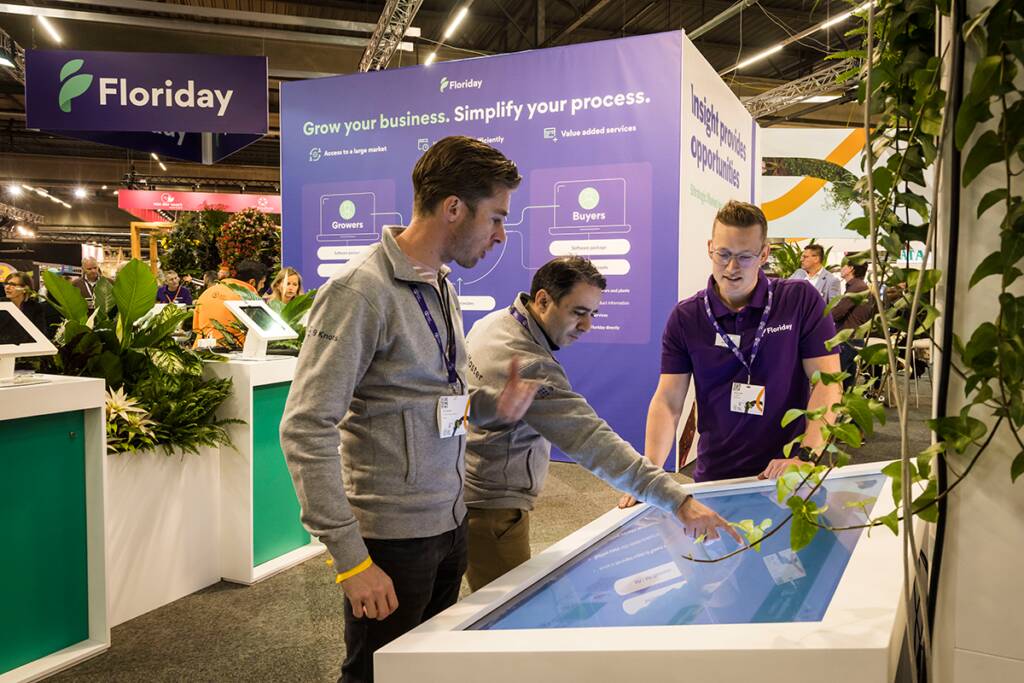 Trade Fair Aalsmeer is ideal for updating growers and buyers about Floriday’s new functionalities, including the Explorer search tool.

This latest search tool allows buyers to browse quickly through the vast assortment of more than 350,000 items. In total, 4,344 growers provide five million supply lines. Handy filtering options allow buyers to quickly find the trade items and supply they are looking for.
Many buyers are used to being able to buy from the current supply through FloraMondo and FloraXchange. There is now ten times more supply on Floriday than on FloraXchange and FMO. The Floriday Explorer is four times faster than FloraXchange.

This year, nine nominees will battle it out to win Royal FloraHolland’s prestigious award, a perfect way to get name recognition for participants. Last year, Dutch-based cut rose, potted phalaenopsis and bedding plant grower Bernhard Nurseries won the 2021 Royal FloraHolland Greenovation Award.
Bernhard is run by brothers Bram, and Simon Bernhard, with a high level of sustainability at the heart of its operations (and thus a minimal footprint on the environment), which is achieved through several operational practices, such as the retrieval of CO2 from its heating systems for distribution back to plants; integrated pest management systems eliminating the need for chemicals; solar electricity production in combination with geothermal energy used to heat the nursery’s Phalaenopsis Elegant line in the nurseries.

Royal FloraHolland will announce the 2022 winner of the Greenovation Award in the Holland House on Wednesday, 9 November, at 3 pm.

SUPER SHOW WILL HELP TO LIFT THE INDUSTRY’S MOOD

Alongside the flower and plant ‘super show’ is a range of side events, including the annual Dutch Flower Group Awards ceremony on Thursday, 10 November, at 3 pm.

Even if there are uncertain months ahead, the forthcoming Trade Fair Aalsmeer demonstrates that its collective future shines brighter when the horticulture community comes together.

The flower and plant Trade Fair Aalsmeer will bring colour, joy, inspiration, and interactions, which will help lift the mood.
Registration for the show and conference is at www.tradefairaalsmeer.royalfloraholland.com.