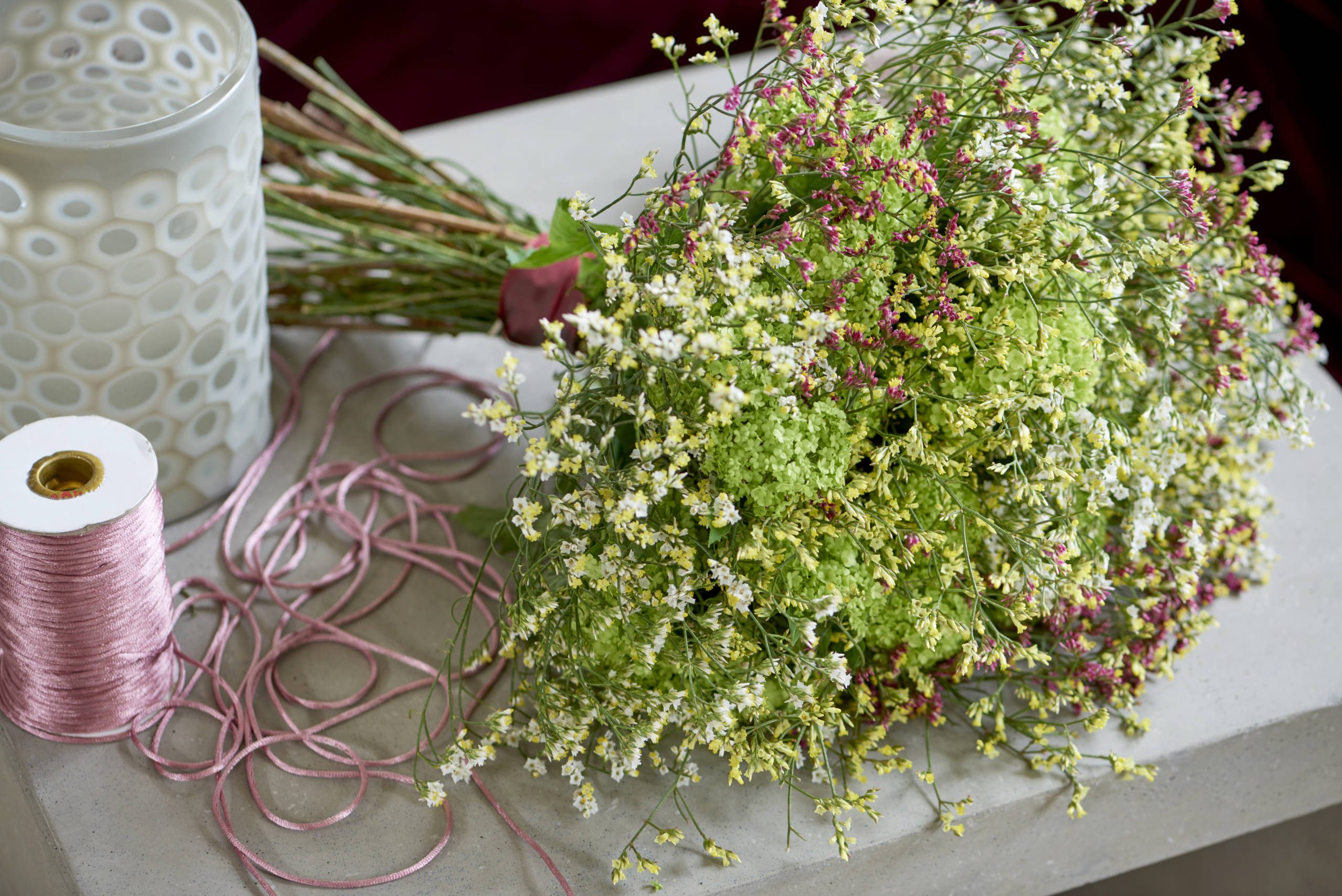 From adding colour, volume, texture and whimsey in mixed bouquets to raising customer satisfaction, from spurring ‘(r)etail sales’ to fitting the global sustainability trend, Royal Van Zanten’s Limonium and Statice from tissue culture have become more than a filler flower. 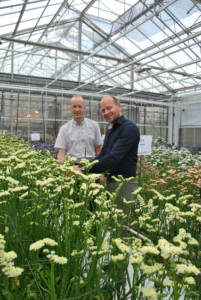 So, it is amazing to hear how the words of product manager Paul Schoorl and marketing manager Rob van der Helm of Dutch-based plant breeder and propagator Royal Van Zanten fit this story. Because the duo’s key message is that Limonium tends to be undeservedly neglected, they argue, the flower is a key cog in the global bouquet manufacturing industry, offering unrivalled opportunities.

And this applies specifically to the company’s China, Birds, and Sun Birds series, arguably the latest and most innovative Limoniums on the market today.

First, let’s get it right and use the correct names. According to Paul Schoorl, Royal Van Zanten’s China series is categorised under Limonium sinense, or just Limonium. In turn, the Sun Birds series are in the Limonium sinuatum group, also known as Statice.

Sinense flowers come in their hundreds and are minute, while the papery Statice ‘combs’ feature white corollas and calyxes in different colours.
Limonium sinense blooms in a cloud, adding elegant and soft hues to bouquets, while Statice typically features larger flowers, thicker stems, and bolder colours.

Limonium and Statice are two of the more than 100 species that belong to what is the largest genus in the Plumbaginaceae family. Its closest relatives include Ameria and Ceratostigma.

In Statice, the 23 cultivars in the Birds and Sun Birds series from tissue culture have revolutionised the colour range, comb size, disease resistance, and weather tolerance within the species, once dominated by seed annuals. 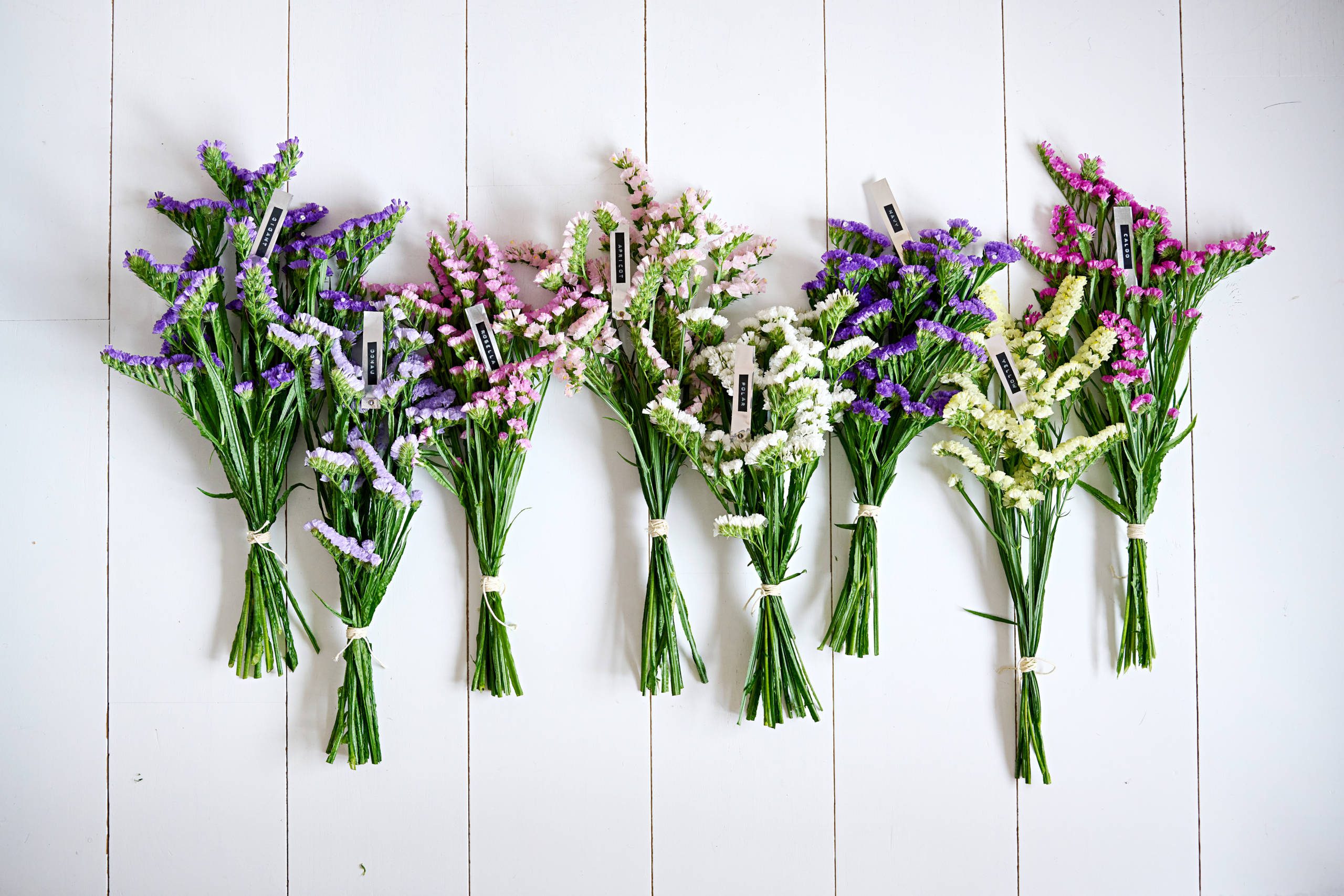 In Statice, the unknown colours such as deep pink, yellow, and apricot are what surprise florists most.

When you choose Royal Van Zanten for your Limonium and Statice, you are working with experts in plant breeding since 1862. They are genuinely engaged in finding solutions for their global customer base: flower farmers/exporters and flower bouquet manufacturers.

Schoorl explains that the company has over three decades of Limonium breeding and propagation by tissue culture. The huge strides forward in improving the portfolio are a combined result of Royal Van Zanten’s century-old expertise, dedication, and fruitful collaboration with Japanese plant breeders and Wageningen-based KeyGene. The latter is a state-of-the-art molecular research centre to accelerate breeding operations and develop varieties that can be cultivated more sustainably.

Schoorl acknowledges, “For over 25 years, we run our certified plant pathology lab for virus detection collecting and organising knowledge, which is extremely useful in a world where viral diseases provide a major challenge to global horticulture. Naturally, there’s a strong focus on new colours but only after we can ensure 100 per cent virus-free material. With this approach we differentiate ourselves from the competition at home and abroad, that is, the USA, Israel, and Japan.”

Schoorl says: “Which is why we are constantly retooling our series to increase their climate resilience, trialling them in-situ, at different locations around the globe. Plant breeding under local circumstances will lead to even more reliable varieties for the grower.”

Limonium growing has become a global affair, with Colombia and Kenya producing for the US and EU markets, respectively.

Colombia primarily grows Limonium sinense in white/yellow hues and a wide variety of Statice. Altogether, the Colombian production area down to Limonium occupies an estimated 70ha.

Additionally, the Netherlands hosts several professional growers who dedicate 15ha to Statice growing. Japan, with an estimated 100ha of Limonium production, is also an important player on the global Limonium stage, producing for markets at home and in surrounding Asian countries. Finally, in Italy, the estimated area of Statice is 25ha.

Royal Van Zanten set up trial greenhouses, annexe showcases, and hardening off facilities in Colombia, Kenya, and the Netherlands.

Schoorl elaborates, “In the past, we would send tissue culture plants to the Netherlands first to harden them off. Presently, the hardening off process is done on the spot with our tissue culture lab in Macedonia sending the material directly to the Colibri flower farm in Colombia, where we rented space to harden off plants and showcase our portfolio. Doing the same thing but then in Naivasha, Kenya is Plantech.” 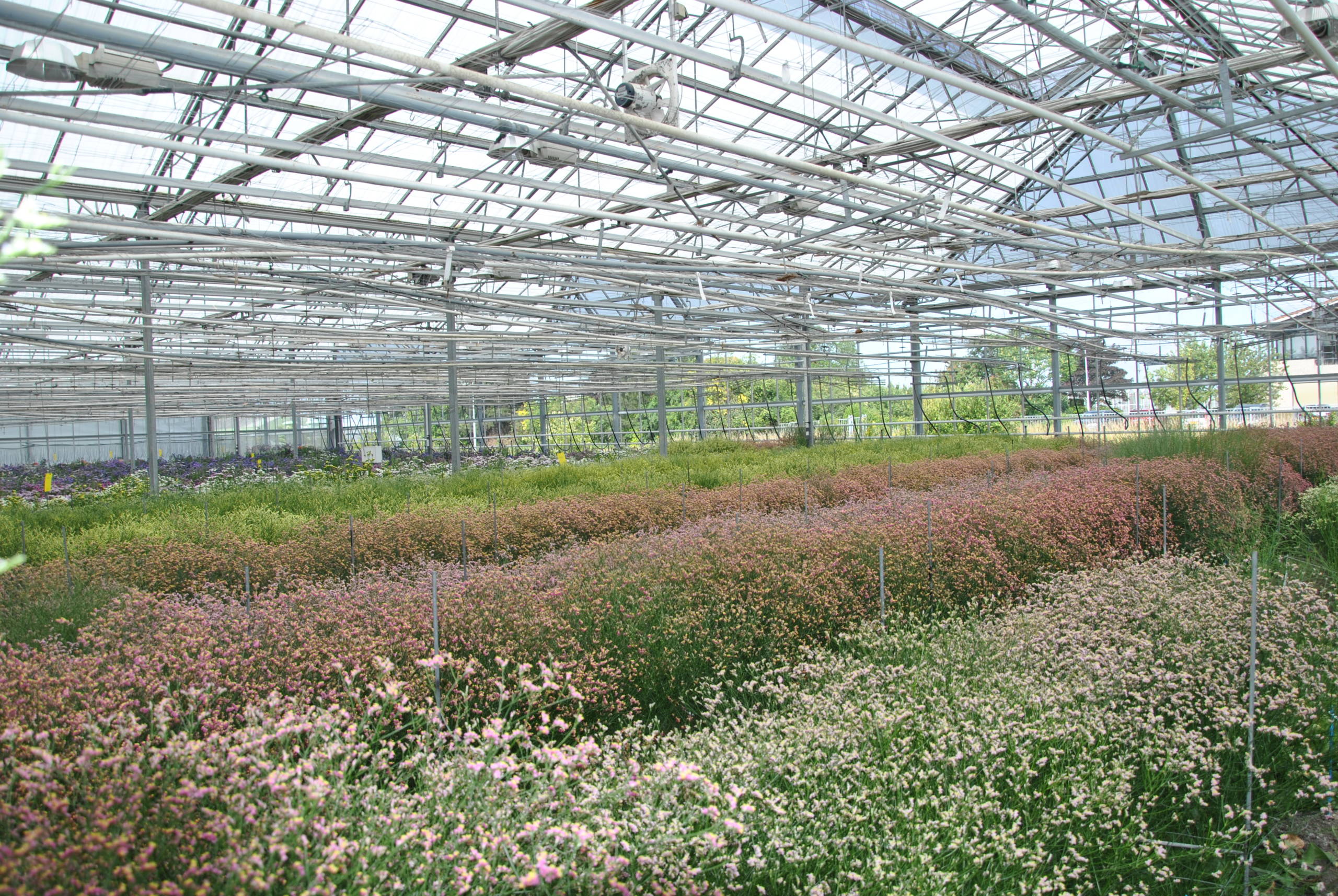 Inside Royal Van Zanten’s Limonium trial greenhouse, the beauty of Limonium sinense speaks for itself.

The markets in Kenya and Colombia are buoyant. Undoubtedly, the Covid-19 pandemic has had a huge impact: the pandemic’s beginning saw the closure of garden centres and flower shops, causing a dramatic drop in demand and millions of binned flowers. The story is very different now, with cut flowers everywhere, from luxury fashion to the high street, and postponed wedding celebrations finally taking place. Kenya, in particular, is a market in full swing.

Here, Royal Van Zanten sees strong interest in its China line, which can be successfully scheduled and capable of 2-3 flushes of bloom in Kenya.”
Schoorl comments, “The first bloom flush produces 70 grams stems that stand 80-90cm tall, whereas a 65cm is the standard. Dependent on the country they are in, growers can maintain these specs over an eight-to-14-month period, harvesting between 20-25 stems per flush. Common pratice in Limonium sinense growing is four flushes per year and replacing plants after two years. Growers producing the cream of the crop may even opt for replacing plants right after the second flush (yielding normally around 15 stems per plant/month), if of course yields have permitted them to do so.”

Putting things into perspective, Schoorl draws a parallel with seed-raised Limonium, dominating production and trade until 1989. “With the best of luck, you will have one bloom flush per year in the desired colour. Overall, not many royalties-free seed cultivars have remained on the market. First-flush stems have poor weight and are unstable in colours. Seed Limonium is cheap but crap at the same time.” 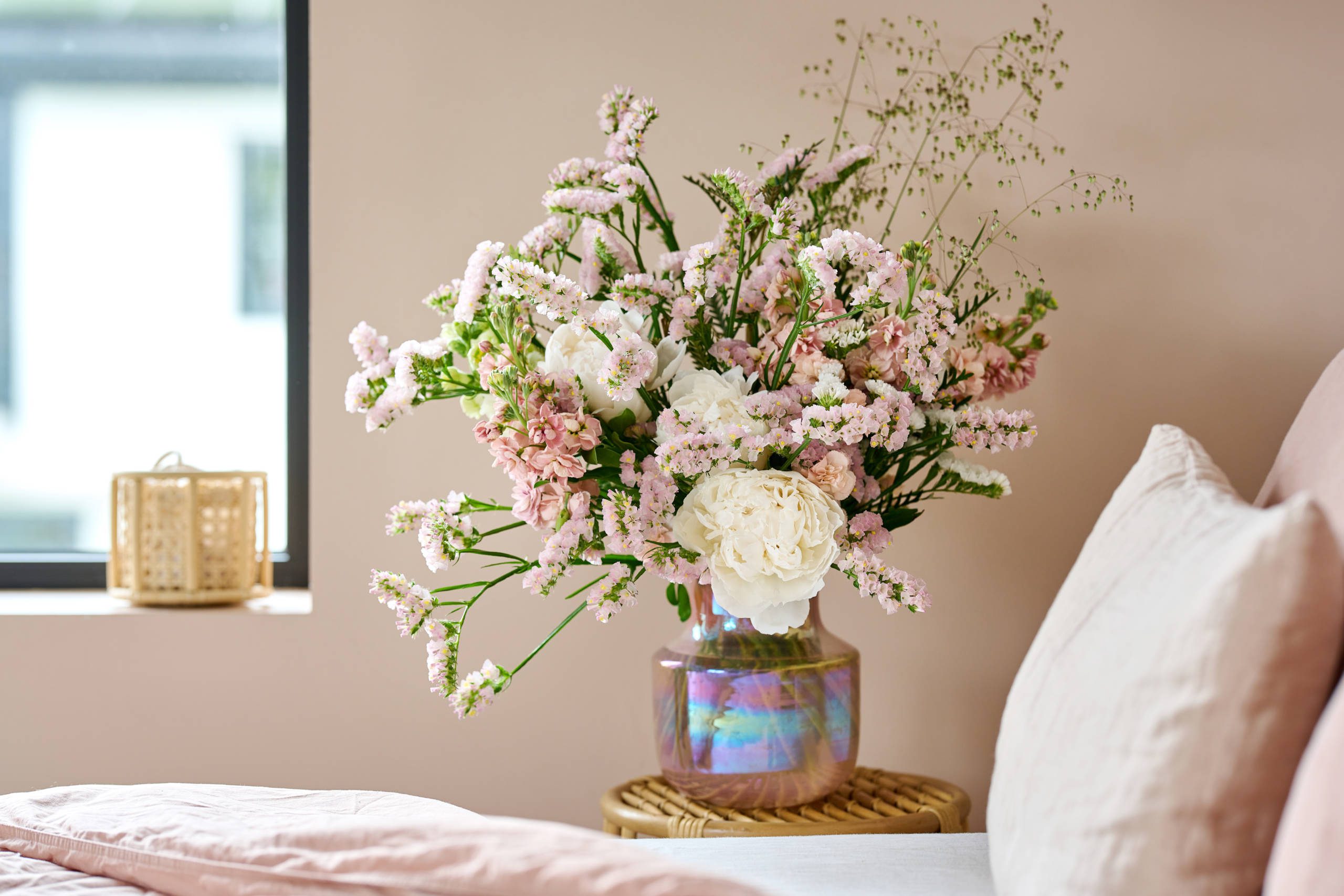 Royal Van Zanten puts marketing muscle behind their Limonium range. Marketing manager Rob van der Helm says, “We are well aware enticing, well-styled imaginary helps to lure in influencers, florists, event planners, floral arrangers, and online flower delivery services through our specially dedicated websites (Statice | Royal Van Zanten and Limonium China Series | Royal Van Zanten). Contrary to other filler flowers, our Limoniums and Statice are available year-round in a plethora of colours; they transport well and have an in-built resistance to diseases and thus longer shelf-life. Stems look freshly picked from the field, where they are a magnet for pollinating insects. Basically, our series never disappoints and tick all the appropriate boxes. In the online florist industry, the popularity of Limonium and Statice is increasing because of the flower’s 16+ day shelf life.”

China, Birds and Sun Birds offer florists a great range and value for money. Van der Helm: “Sometimes, the price tends to be too much of a decision-driver among florists. They may feel the China and Misty range is somewhat expensive. However, once florists start to incorporate them into their bouquets, discovering how quickly they fill a bouquet with just two branches, repeat sales follow automatically. What’s more, based on past experiences, some florists dislike the musty odour of Limoniums to the point of avoiding them.

The good news is that the hybridising of Limoniums has resulted in fragrance-free varieties. In Statice, the unknown colours such as deep pink, yellow, and apricot surprise florists most.”

The China, Birds and Sun Bird series will be fully displayed at this year’s IFTF show and Trade Fair Aalsmeer in the second week of November.
The last time industry professionals could see them in their full glory was at the 2022 FlowerTrials when Royal Van Zanten opened its Limonium greenhouse in Rijsenhout.

Visitors can tour the trial greenhouse letting the masses of colourful flowers speak for themselves.

This article was first featured in July-August 2022 FloraCulture International.