The top of Tuscany’s flower crop 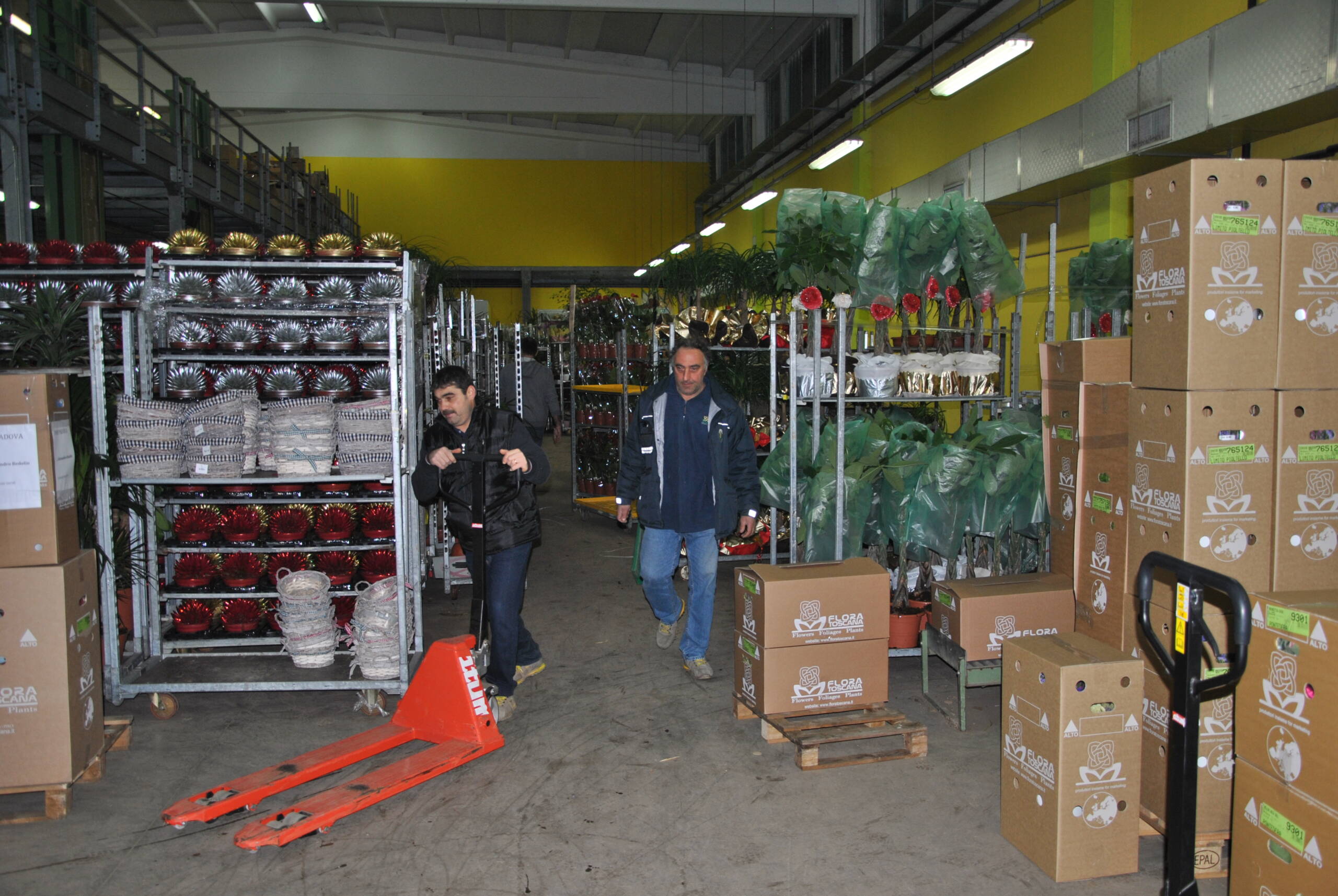 Contrary to the Pescia’s Mercato dei Fiori della Toscana , where the wholesale market institution is viewed as a public good and where ownership of the market belongs to the city authorities, Flora Toscana  is a private business organisation, a primary producer cooperative that is owned and controlled by its members.

The 2008 merger between Tuscany’s Toscoflora and Geoflor Toscana created one of Italy’s most important floral wholesale powerhouses with 120 personnel and 2014 sales volumes totalling approximately 70,000,000 flower stems and 1,200,000 pot plants (in this figure items sold by both bunch and kg are included). The Flora Toscana cooperative, with its headquarters in Pescia, supplies inputs for the cultivation process and does marketing and processing of flowers, cut foliage and pot plants for predominantly local growers. 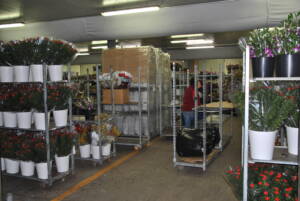 Flora Toscana took root in 1979, when ten visionary entrepreneurs came together to share a common problem they each had: the skyrocketing prices of materials and sundries. They formed a business cooperative to purchase horticultural supplies and obtain services at a lower cost.

“Of the 250 members Flora Toscana has today, 145 are actively selling their flowers and plants through the cooperative. Many of our growers are located in Pescia, Viareggio and Lucca, but also in Italian regions such as Puglia, Lazio, Liguria and  Sicily. They even come from as far afield as Albania and Spain, where they grow Pistachia lentiscus and leatherleaf fern (Arachniodus adiantiformis)/Statice respectively. Only recently, suppliers of Fairtrade roses from Kenya have joined our organisation,” explained marketing manager Luciana Romiti, fluent in English thanks to her UK born mother.

She added, “Most are family-run businesses, complementing one another rather than compete. Sicily, for example, is a provider of carnations, chrysanthemums and ornamental Citrus, while Liguria is famous for its mimosa, Ginestra and cut foliage. Overall, our most popular items are Chrysanthemums, Hydrangea, Calla, lily, Limonium, peonies and Ranunculus, Gypsophila, Gerbera, Anemone and cut foliage such as Ruscus, Eucalyptus Fatsia and Aspidistra. In pot plants, Proteas are our flagship product, while olive trees, ornamental Citrus, Mimosa, perennials and bedding plants also take their fair share of the market. ” 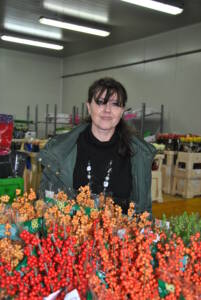 Flora Toscana concentrates on three types of activities for its growers. First is the purchase of a wide range of horticultural supplies through its power brand Toscoflora. They make large-scale purchases of seeds, young plants, fertilisers,  crop protection products, spray equipment and substrates, and pass their cost savings on to their members.

“Second comes the organisation’s marketing role that consists of assembling, (un)packing, bunching and selling members’ products in both domestic and foreign markets,” said Luciana adding that exports to Germany, Netherlands and Protea-minded Portugal (Madeira and the Azores have a long tradition in Protea growing) account for 15% of total sales.

The cooperative puts a considerable amount of effort into determining the prices of its products.

“We input a starting price in our system price which is obtained from various sources. Flora Toscana buys regularly through the Royal FloraHolland KOA system, as such it keeps up with the price situation of the Dutch auction clocks. We also have the possibility of consulting internet data sources. And lastly, there are our daily contacts with the exporters/suppliers from whom we buy and with the markets and customers.”

The third function is providing quality standards that all growers must adhere to so that customers can expect the same fine quality from all grower members. 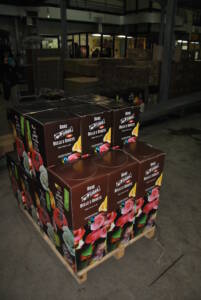 The Fairtrade label illustrates that Flora Toscana shows good stewardship of natural resources and the environment.

Luciana was so kind to take FCI through its processing hall, packing area and cold stores. Standing at a conveyor belt, a group of mostly female workers keep the stream of Fairtrade roses from Kenya (30% of the flowers traded by Flora Toscana are imported) going.

Major supermarket chains increasingly require their produce suppliers to provide evidence of  commitment to free trade, fair labour practices, equitable compensation and environmental sustainability. According to Luciana, assurances, such as the Fairtrade label, provide the company’s customers increased confidence that Flora Toscana roses, not only are of the finest quality but equally meet standards for social and environmental sustainability. Workers must be justly compensated and provided with a safe working environment.

The Fairtrade participation is one of many sustainability programmes by the cooperative. Previously earning other certifications such as GLOBALG.A.P and ISO 14001 and SA 8000, Flora Toscana has defined a sustainability strategy that helps the company identify product improvements and process efficiencies that reduce its environmental footprint—while focusing on the social aspects of business.

Fairtrade is believed to be one of the few certifications that returns money directly to the workers in the producing country to improve their standard of living. Another argument in favour of Fairtrade is the fact that this trading initiative includes coffee, bananas and chocolate. It is not specific to the floral industry and is more likely to be a brand that consumers will recognise.

In 2006, Flora Toscana was the first Italian company to distribute Fairtrade roses. ”Let us clarify that Flora Toscana was not asked to enter the Fairtrade market by any of our retail customers, it was our own decision to join Fairtrade, a system which we felt close to our spirit of cooperative, therefore working not only for economic reasons but also for mutual social and cultural benefits.

We then obviously offered this possibility to our supermarket customers,” outlined Luciana.

She went on to say that the bulk of Flora Toscana’s flowers and plants goes to wholesalers, retail florists and street vendors, while supermarket chains such as Esselunga, COOP, CONAD and Carrefour make up to 40% of the total sales. 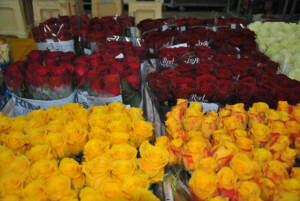 Some retail experts reduce Northern Europe to a fast food and supermarket culture, while countries in the southern part of Europe such as Italy still put more emphasis on family living, outdoor retail markets and specialist retailers. What does Luciana think?

“Up to a certain point we can agree to the above described picture, historically given the different culture and weather conditions of our Mediterranean country, people tend to use flowers for big ceremonies and events and people spend more time in the open rather than indoors. But we are also aware of the changes that are occurring in Italian society which is definitely becoming more and more multi-ethnic, bringing in new traditions and habits, which is also being reflected in the consumption of flowers and pot plants. Luciana feels that there is an unexpressed potential in the Italian retail market, although there is also room for improvement when it comes to the overall flower quality, presentation and knowledge of personnel at Italian supermarket level. ”There is still a lot to be done in terms of organisation and programming. In some way the Italian retail system reflects our culture, finding it very hard to be part of a whole. This attitude can also be seen within the same supply chain, where some shops are very professional both in knowledge, presentation and care of the product, others not so much.”

State of the industry

Flora Toscana’s business performance is not automatically a barometer of the current state of the local flower producers, who Luciana describes as ‘struggling’.

“There is strong competition coming from the southern hemisphere countries reaching Italy direct or via the Netherlands. Floriculture in Tuscany is in a re-organisation phase, the Tuscan region is putting a lot of resources into agriculture in general, trying to bring young people back to agriculture and floriculture.”

Cheap import and high energy prices have forced local growers to switch to other crops.

“Flora Toscana has given an important switch back to the early 2000s with 15 of our growers swapping cut flowers for pot plants, specifically pot proteas and other Australian flora.

Pescia in general has (from the traditional standard carnations produced after the 2nd World War) changed and developed many species such as Gerbera, Gypsophila, lilies, Chrysanthemums, Gladiolus, and various foliages.”

Luciana believes that collaboration and supply chain management is the key to a more flourishing industry. “We need to be more part of a system, a real network that must collaborate and integrate with each other to optimise resources and also to make the sector’s needs be heard. More entrepreneurial skills and assistance to the growers are needed. Clear rules, fiscal control to fight the plague of the black market, which is peeking up due to the economic crisis and recession, and has been affecting Italy for the past 2 years.”

Flora Toscana operates a full service cash and carry store at its Pescia (Tuscany) location. It includes a large walk-in cooler with the widest selection of fresh cut flowers available. Its cash & carry store is not open to the public and sells wholesale only to the floral trade. To purchase one must have a current account with Flora Toscana. Flowers, cut foliage and houseplants are grown in Italy but also sourced from abroad, particularly from the Netherlands as Flora Toscana buys directly from the Dutch auctions via Royal FloraHolland’s remote buying system KOA.

At the start of the new millennium until 2009, Flora Toscana rented space for a cash and carry store at the Mercato dei Fiori. “In the early 2000s, we were mostly selling to the wholesale market, not to the florists. We suspended the cash and carry operations at Mefit because logistics were expensive
(warehouse rent, fees etc.) and also because of the unfair competition due to the black market. We decided to start serving the florists from our depot in Pescia and started our activity with our C&C near Florence,” said Luciana.

“Mefit is a market, so a place where supply (the growers) and demand (the customers ) meet face to face. Flora Toscana is a cooperative of growers, our mission is to sell our grower’s production and also provide them with services such as technical assistance, consultancy service on new crops, new markets research and supply of technical facilities.” 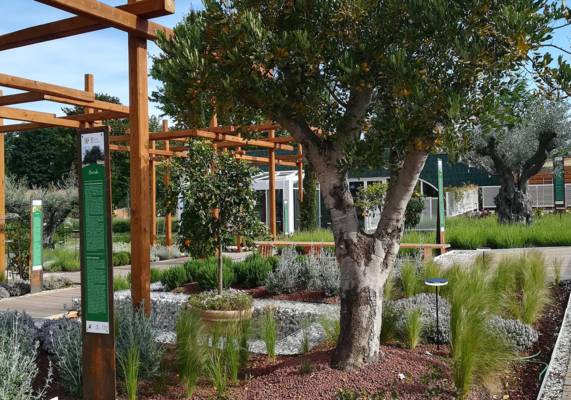