The route to recovery is not sprinkled with rose petals 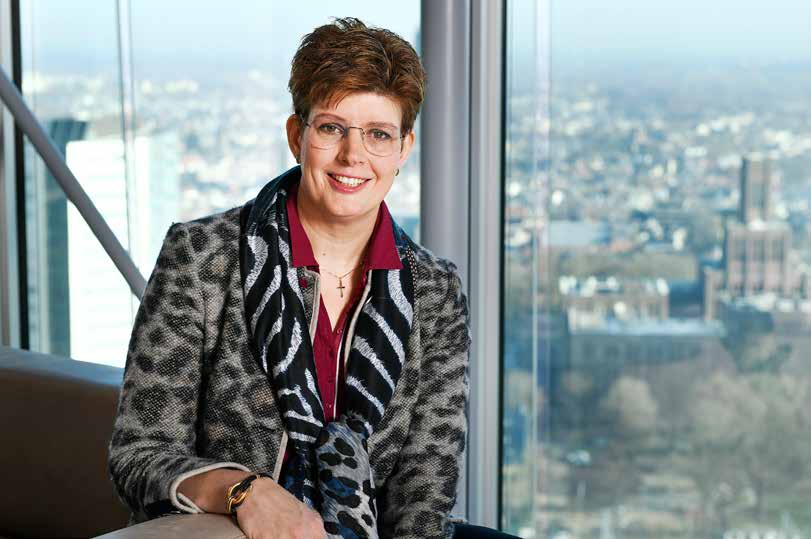 FCI sits down with Carin van Huët director of Food & Agribusiness at Rabobank. She speaks about the impact of the coronavirus on the Dutch ornamental horticulture industry. She looks at the challenges that lie ahead in 2021, including high unemployment rates, lower consumer confidence, reduced labour turnover, and the global disruption in incomes.

Born the daughter of a dairy farmer in the north-western part of the Netherlands, Van Huët experienced working in horticulture since she
was a kid. She took her education at Wageningen University with floriculture being the subject of one of her graduation thesis.

More recently, Van Huët delivered a keynote speech at AIPH’s virtual Recovery from Crisis conference about the state of floriculture post-
Covid-19, will it wilt or flourish?

Van Huët starts by saying that before we knew Covid-19 even existed, the picture was looking rosy. Confidence among Dutch entrepreneurs in ornamental horticulture was soaring high, especially during the final quarter of 2019. A survey of business opinion by Agridirect, for example, found that before the coronavirus outbreak 35.8 per cent of potted plant growers, 31 per cent of bedding plant growers and 25.5 per cent of cut flower and perennial plant growers were looking to expand their business.

“Pre-Covid-19, the outlook for the Dutch industry in 2020 was very positive with an estimated Compound Annual Growth Rate of consumer spending spread between one to two per cent in Europe, two per cent in the USA and more than five per cent growth in Asia,” recalls Van Huët.

That was all before coronavirus. Now, nearly nine months later, Van Huët concludes that this global pandemic has put the Dutch ornamental horticulture sector on a wild roller coaster ride. One that is hurtling, at dazzling speeds downhill as of 16 March with auction clocks in a free fall, and the composting of tonnes of unwanted flowers.

Countries introduced mandatory border checks which resulted in widespread disruption in the logistics chain. In road traffic, this situation led to a significant number of delayed cross-border deliveries. At the same time, the global air freight market faced capacity constraint from the loss of available ‘belly cargo space’ as passenger aircraft remained parked. “In addition, the severity and timing of the lockdown measures differed from country to country. What made things worse was that the pandemic prompted seasonal workers from Poland and Romania to return home, creating immediate labour shortages.”

Van Huët believes that the pandemic will accelerate automation in horticulture and more importantly, that the money needed for it is there. The Dutch government has launched a stimulus package that brought in much-needed relief, and banks continue to play a central role in not just supporting customers and employees, but society as well. She says, “Over the past few months, we all witnessed how incredibly resilient Dutch horticulture is. Almost all market segments have recovered very well. Upon entering this period of stress, the sector had built significant cash buffers to finance some of the cash flow deficit.”

“The outlook for the ornamentals sector remains positive,” she continues, highlighting the fact that Covid-19 should not be a barrier to progress and that horticultural companies should be thinking about automating some processes. “Even for smaller companies there are automation solutions such as robot harvest carts, grading machines, potting machines and conveyor belt systems. It is not always necessary to implement the most advanced technology to reduce your dependency on foreign labour.”

The massive disruption in the supply chain because of Covid-19 has given some reason to believe that online delivery of flowers and plants will be the future. Commenting on the boost in online sales, Van Huët says, “First, we noticed an increase of digital B2B communication, followed by a surge in demand for online B2C flower purchases. Now, nine months later consumers are already becoming familiar with the vast landscape in online flower delivery.”

What is more, notes Van Huët, at the height of the pandemic, flower and plant growers did their utmost to stay connected with the end customer. “Around the world tens of thousands of flowers and plants were given away to health care professionals to thank them for their incredible efforts. These tokens of appreciation created a lot of goodwill, which prompts me to ask the question in what way we can use this in our market approach post-Covid 19.”

She continues by saying that the sector did increase sooner than anticipated. “In mid-April, the market showed early signs of recovery with Mother’s Day sales being rather buoyant, that is, in countries where florists and garden centres could open their doors. Initially, there were a lot of concerns regarding the bedding plant sector, its growers and the perishability and seasonality of the plants, but in the end Dutch garden centre reported sales of 25 per cent up from last year during the first 30 weeks of 2020.”

GLIMMERS OF HOPE IN A DARK PERIOD

Van Huët sees booming garden centres sales as welcome glimmers of light in a dark period, which she touted “the deepest economic crisis since the Great Depression in the 1930s”. In its Global Economic Outlook as of 21 July 2020, Rabobank’s baseline forecast envisions a 4.1 per cent contraction in global GDP in 2020 with economies such as Spain (-13.3 per cent), Italy (-11.5 per cent), United Kingdom (-10.9 per cent) and France (-10.1 per cent) being among the hardest-hit.

Van Huët warns that the road to recovery will be uncertain and not sprinkled with rose petals as expenditures on ornamentals (especially on cut flowers) correlate highly with disposable income. In 2021, Rabobank anticipates higher unemployment levels and lower disposable income which will translate into a market turnover that is down by 5 to seven per cent. This calculation considers a three to four per cent drop in supply volumes and two to three reduction in prices.

“The global health crisis is generating winners and losers with the cut flower segment undoubtingly feeling more pressure as couples rethink their wedding arrangements and other celebration events continue to be cancelled and postponed. Cash-rich flower farms are set to get bigger but there will be a debt shake-out of smaller companies in Kenya, Colombia and Ecuador,” says Van Huët.

Van Huët is one of the co-authors of Rabobank’s Vision for the Dutch agriculture and horticulture sector 2030. The report foresees that trade flows will go into reverse. The pre-Covid global market was already under pressure with trade wars shifting gear, and trade barriers putting a brake on economic growth. Under the new normal, Rabobank anticipates even more changes in the global agricultural and horticultural trade and the Netherlands is no different.

In the middle range of Dutch agricultural exports, for example, the customer base will be increasingly in an 800km radius. The outlook for high-value Dutch seed potato and seed exports is unchangeably good, regardless of their distance to the market. By contrast, the picture for long-haul exports of cut flowers, predominantly classifying as mid-range products, is less rosy.

Van Huët notes, “To a certain extent plants and flowers fall into the middle range category. In different parts of the world people will produce more flowers and plants locally or regionally, rather than importing these from the Netherlands. Countries will become more self-sufficient in ornamentals.

However, Rabobank’s Vision project is a roadmap to 2030. As such, it is only natural that along the way there will still be business opportunities to seize at long haul destinations.” Closer to home, key export markets for Dutch flowers and plants such as Germany, the UK and France are almost saturated marketplaces with fewer people buying fewer flowers. With signals of de-globalisation and self-sufficiency becoming more of a mantra, Van Huët believes, that it has never been more critical for ornamentals growers to take steps to stand out from their competition by providing customers insight into their sustainability footprints.

She adds, “These must be part of a unique selling proposition, including other aspects such as consumer appeal, emotional value, and the fun experience that surround floral purchases.”

Van Huët, stresses that locally grown Dutch flowers are not per se better than flowers sourced from other growing regions in Africa and South America.

“The pertinent question is if flowers imported into Europe have a greater environmental impact than the same flowers produced within Europe? Our sources tell us that this is not automatically the case. Using the latest storage and preservation techniques, growers in Africa may well succeed in transporting their flowers by sea instead of using air freight. This will move their business one step ahead of the competition in terms of climate action. By contrast, if Dutch greenhouse growers start to adapt renewable energy sources to reduce their footprint, they can make use of the same competitive advantage. There is a lot of potential out there but also a lot of work to do. In Africa, horticulture faces also other challenges such as social footprint, water footprint and reduction in crop protection products. Sustainability is a complex idea going beyond mere climate action.”