Held in Shiraz, a fabled city in south-western Iran – whose name is synonymous with poetry and gardening – the three-day event aims to develop, promote and share knowledge and expand communication between national and international experts and researchers in the field of ornamental horticulture. The Congress will encourage applied research to help solve national problems in ornamental plants production and trade. 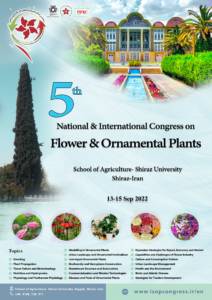 The organisers believe the scientific congress will play a prominent role in harmonising activities in academic research and professional production of ornamentals.

The ISOP Congress is held every second year for the presentation of papers on different aspects of professional flower and plant growing. These meetings attract many participants from all parts of the world and have made valid contributions to the development of Iran’s flower industry. Last year, industry representatives and reseachers from seven countries participated in ISOP’s congress.

On behalf of the organizing committee, Dr. Pejman Azadi said that to mark the occasion international flower businesses are once again cordially invited to participate.

ISOP President Pejman Azadi will kick off the event with his thoughts about ornamental horticulture in Iran.

Iran is in the arid zone, some 65% of its territory has an arid or hyper-arid climate. Roughly 12 per cent of Iran’s land is cultivable with the western and northwestern portions of the country having the most fertile soil and the highest potential for production of ornamentals.

Currently there are an estimated 10,000 flower and plant nurseries in Iran with approximately 3,500 hectares in outdoor production and 2,200 hectares under protection (95 per cent plastic tunnels and 5 per cent glasshouses).

For more information about the congress visit: http://www.isopcongress.ir/en//

Contact ISOP President Pejman [email protected] to secure your place at the congress.