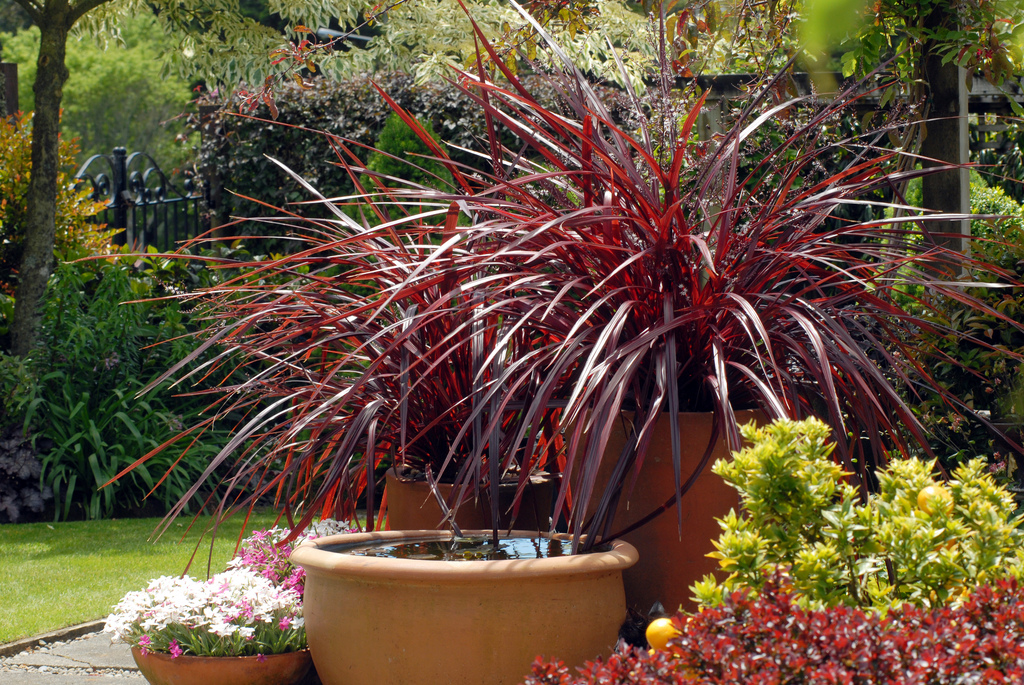 New for 2008: With its glossy mahogany/burgundy leaves, compact bushy form and cascading habit, Festival Grassª, the dramatic new cordyline from Anthony Tesselaar Plants, introduces something totally new and desirable to the summer garden, landscape and container plantings. The only basal branching cordyline available, Festival Grass’ long strappy leaves cascade to create a fountain effect, swaying in the slightest of breezes to add movement to the garden. Hardy in USDA zones 8 through 11. In colder areas, it is an option to keep Festival Grass indoors overwinter as a houseplant to gain size season by season, sustaining it for future summer garden use. Festival Grass does quite well indoors, maintaining its glossy look and cascading form, even in winterÕs lower light.

DIDCOT, UK: The new plant passport regulations came into force last Saturday (14th December, 2019), and the UK’s Horticultural Trade Association (HTA) has requested that the country’s ministry of agriculture, Defra, operate a common-sense approach to implementation. FCI asked HTA about the differences between plant passports for the British and Dutch.

FCI: The suggestion is that for the UK, there will be a 12-month introduction grace period where no penalties will be issued for non-compliance as long as businesses can demonstrate their intent to comply with the legislation. Meanwhile, the Dutch authorities announced last month there is no grace period for Dutch growers. How probable is the grace period in the UK?

HTA: Due to the General Election that took place in the UK last week (12th December, 2019) Government departments have been unable to engage with stakeholders in policy decision across the board – a process known as purdah. Due to HTA and other NGO pressure, the Defra team responsible for implementing plant passport (SRSF regulation) has received clearance to re-engage with stakeholders during the period of purdah due to the imminent implementation of the rules. They have stated that although there will be no exemption to penalties, there will be a stepped approach to the policing of the regulations over the coming weeks and months, and inspectors will consider a business’s intent to comply. APHA plant health inspectors have also received interpretation guidelines from the implementation team and are now engaging with clients on how best to implement the legislation.”

In October 2016, the European Parliament and the Council adopted Regulation 2016/2031 on protective measures against plant pests (“Plant Health Law”). On 13th December 2016, the regulation entered into force and is now applicable since 14th December 2019. The EU and national plant health authorities have communicated widely  with the industry with regards to the EU’s new plant law. Is a grace period a proof of a sector that is ill-prepared, doesn’t stay abreast of upcoming legislation or is about a legislation which is by far too costly, complex and time-consuming to be implemented in time?

Although the HTA has been saying for quite some time now that Plant Health regulation will be changing on 14th December, and that all plants will require plant passports, both UK industry and Government have been dealing with uncertainty of a no-deal Brexit. The subsequent preparations that both the UK industry and the UK Government have to take on, alongside a significantly shifting timetable, had meant the actual plans for the new plant passport regulations has meant a severely shortened window. Once Defra and the HTA, alongside other trade organisations, got into the detail of interpreting the regulations the progress has been fast, but not left businesses enough time to plan what is a significant change for the industry. We have heard anecdotally that similar issues have been experienced in other member states too.

What percentage of UK plant growers were expected to have EU protocols ready by 14th December?

The HTA is not aware of any research to ascertain an estimate on this.

In the Netherlands plant health authorities estimate the average cost for the new regulation is in between €2,000 and €3,000 per grower. What are the estimated costs in the UK?

The HTA is not aware of any research to ascertain an estimate on this.

However, Defra will allow a multi-species passport to travel attached to a consignment, e.g. a trolley, if it fulfils a specific criterion. For example, a grower selling plants to a landscaper can plant passport with accompanying paperwork. The landscaper collects the plants as an entire consignment, travels directly to the planting location, plants the shipment as the whole at that site keeps the relevant paperwork containing the plant passport information for three years and always maintains traceability for all plants.

Another example would be a trolley of finished plants going to a single retail location, and the plant passport can be a multi-species passport attached to the trolley. As long as there are no amendments  to the trolley of plants, and the products are not changed, broken up or sold on in any way before arriving at its final location these plants can pass through a distribution centre if traceability and integrity are maintained.

This arrangement will only be allowed for plants travelling to their final location “en masse” (whether a retail store, development site or planting location), and the consignment must not be broken down or sold on in any way unless to a consumer.

There must be traceability for all the goods covered by the multi-species plant passport, and records kept accordingly.

The €2,000 – €3,000 cost adds up to a more or less regular situation with an ornamental plant nursery growing standard crops. However, in the Netherlands, problems have emerged with growers with so-called poly-cultures, plant mixes, bedding plants and hanging baskets. Mentioned are cases of succulent and cacti plant growers who grow in eight different pot sizes and around 70 different species originating from ten different genera. These are potted on ten different sites by 18 potting machines. If such growers produce 400,000 pots per week and plant passports at pot level cost around 0.05 eurocents at pot level, it will cost this grower €20,000 per week. Are these types of problems on HTA’s radar?

Yes, some HTA members have estimated costs up to £100,000 due to the significant increases in physical labelling requirements, the investment required in machinery and software, the labour required and development of traceability systems

The plant passport regulations, which come into force in the event of the UK leaving the EU with a deal, mean that all plants for planting and plant products will need to travel with plant passports. What happens in case of a no-deal Brexit?