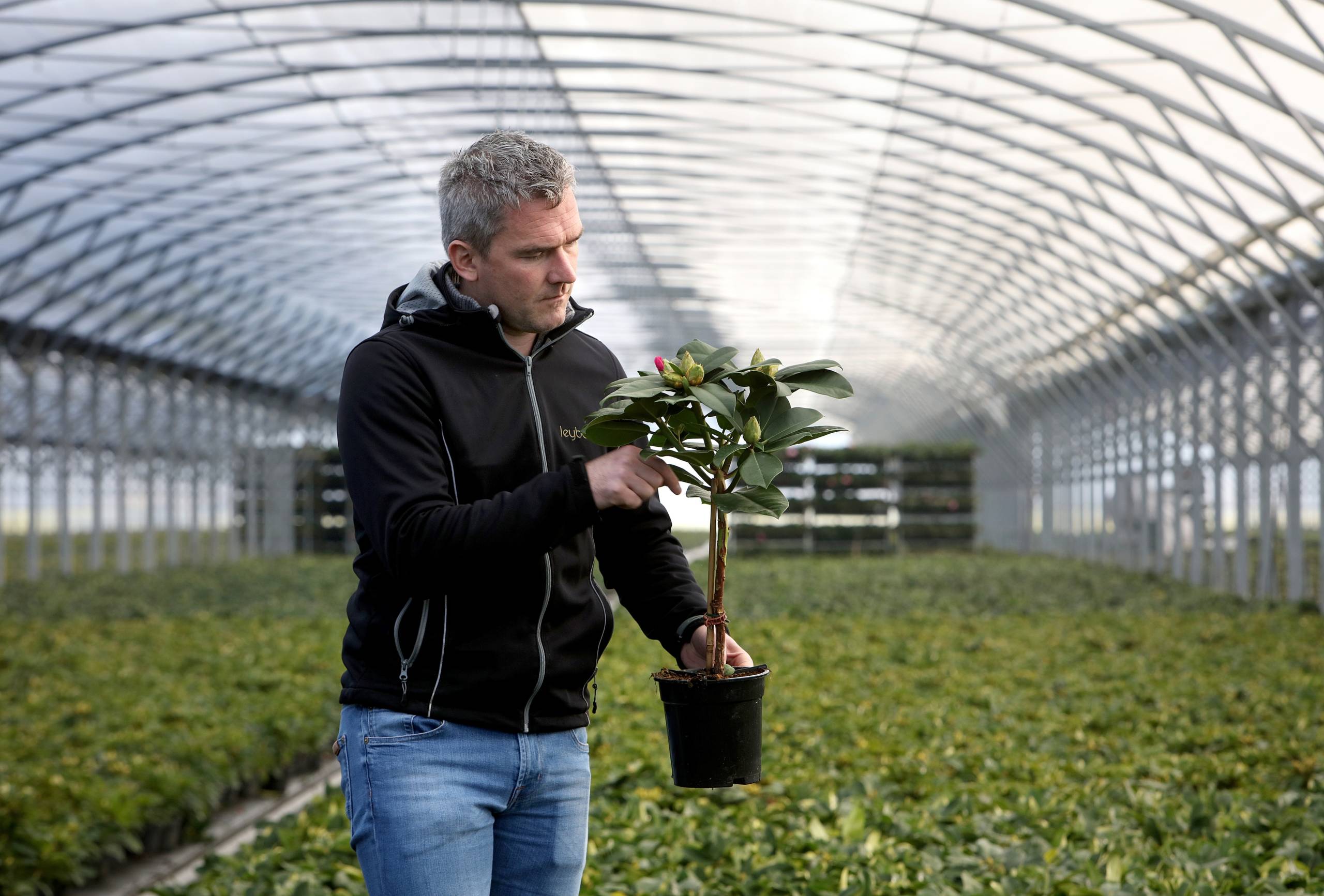 Tell Tom Leybaert from Moerbeke (Belgium) that Rhododendrons and Azaleas have become a bore for growers and in gardens, he’ll immediately point to the state of the art growing techniques as well as to the latest breeding breakthrough, XXL Rhododendron.

Founded by Etienne Leybaert in 1970, today Bloemisterij Leybaert is a truly export-orientated company with 19ha under glass and 5 ha field-production of an estimated 2,500,000 plants/year with Rhododendron, Azalea indica, Vaccinum corymbosum and Chamaecyparis lawsonia ‘Ellwoodii’ being the major crops. 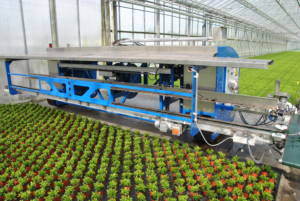 High precision spacing of plants is done by a robot.

Leybaert grows his Rhododendrons mainly in 2 litre (450,000 plants/year) and 5 litre (60,000 plants) pots and recommends planting one cutting per pot. Depending on the weather 2 litre pots will finish in 12 months (March potting, saleable in March one year later) and 5 litre pots in 15 months (December potting , saleable in the second year in March). During summer months plants are moved outside or in retractable greenhouses with anti-hail netting. Rhododendrons are a quintessential seasonal business with peak sales in autumn (20%) and Spring (80%.).

Unlike Rhododendrons, Leybaert Azaleas (9, 10.5, 14, 15 and 17 cm pots) are a semi-finished product with Danish, Swedish, German, French and Belgian growers who start with a budded, ready to finish Azalea forcing them into bloom with adequate light levels and temperatures ranging from 22°C to 25°C.

The propagation of  Azaleas is done by stem cuttings with crop shearing creating the cutting material for the next crop. The bottom of the stem is dipped in hormone rooting powder. Depending on the pot size a minimum of three and maximum of six cuttings are placed into the pot. For best rooting of the pre-cooled cuttings, Leybaert covers the newly stuck Azaleas with a plastic sheet punched in combination with an acrylic sheet covering.

Particular attention should be given to closing shade curtains in case of intensive sunlight. The second phase starts after 14 days when the plastic can be removed and the plants are put into the growing area with full light and temperatures between 22°C and 23°C. Four to five weeks after sticking, the plants are ready for their first of a total four prunings carried out by an automatic pruning shear.  Smaller 9 cm pots will pre-finish in 6 months,  17 cm pots in 24 months.

Leybaert explained that  job number one with Azaleas is to prepare plants by shearing, shaping and conditioning them for subsequent 3-week forcing by third parties. “Azaleas are  an expensive crop to grow. As such greenhouse growers have stopped raising the crop or reduced their production.” 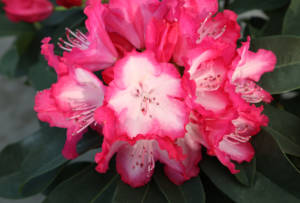 Reading like an adventure novel, the history of Ghent Azaleas begins in the late 18th century. Azaleas gradually filtered out of the Chinese, Japanese and North American countryside to the West where the species was used for hybridization.

The Ghent Azaleas took root in the 1820s when P. Mortier, a baker in Ghent, crossbred several American Azalea species, supposedly using the heat from his ovens to bring on late-flowering species in order to use them for crossbreeding with earlier flowering species.

Over the centuries, Azaleas have become a powerful symbol of the Ghent area with the Ghent Floralies used as a recognizable symbol of the city. “Today it is more important than ever to engage with customers”, said Leybaert. “Things are not easy. At least this is what I hear when I speak to customers. Production areas continue to decrease as the plant suffers from an image problem with consumers thinking that Azaleas are somewhat old-fashioned and boring and that keeping them is time-consuming and difficult. The question is whether Azaleas are sexy enough to attract younger consumers.”

As for Leybaert, there’s no time for resting on laurels. He’s putting a lot of effort into product promotion by launching their My Favourite brand for premium quality Rhododendrons. “I believe the industry as a whole needs to become more innovative, exciting, enjoyable and appealing to youngsters. That’s why one of the major challenges for today’s plant nurseries  is ageing owners and no successors,” said Leybaert. 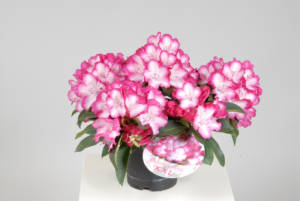 Innovation is the cornerstone of the company. Leybaert: “In Azaleas we are working with the breeders from the Floré Group who have created a range of potted Hortinno Azaleas that not only deliver excellent keeping quality for four to six weeks, but also stand out for their lusciously glistening leaves and non-shedding blooms. One of the first outcomes of the Hortinno breeding programme was the XXL Rhododendron that provides a real wow factor due to its strikingly large racemes and extended flowering period.”

XXL, trading in the UK as Pink Ruffles, features truly amazing flowers. “Albeit a creation from the competitor, I believe this new Rhododendron is really something the consumer was waiting for,” says Leybaert. Enjoying strong demand are Rhododendron mini trees with a 12-month crop time. Leybaert: “Trimmed in lollipop standards, these Rhododendrons feature big green leaves and large, coloured buds for retail appeal.”

Major changes in the Rhododendron industry due to changes in the varietal mix have been rare, while the change of consumer demands is fast-paced. As such Leybaert has teamed up with Belgian government’s Institute for Agricultural and Fisheries Research, ILVO, to set up a new Rhododendron breeding programme that was launched to cater to a new breed of customers (and novelty rhodos of course). “We can clearly see the rise of the  socially minded customers who want hassle-free and environmentally friendly products. Think of increasing customer satisfaction by creating a line of frost-resistant hybrids or hybrids that are less susceptible to phytophthora root rot and other diseases and thus will require less chemical treatments,” said Leybaert. 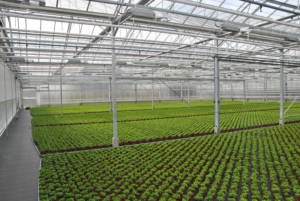 A new, purpose-built greenhouse, fitted with conventional HPS lamps that provide the optimal light level for photosynthesis which lies around 4500 lux, is now used to jump start spring by forcing early Rhododendrons.

Other much sought-after characteristics in Rhododendron breeding are early flowering and compact growth to make plants suitable for smaller gardens and containers on shaded patios. “A new, purpose-built greenhouse, fitted with conventional HPS lamps that provide the optimal light level for photosynthesis which lies around 4500 lux, is now used to jump start spring by forcing early Rhododendrons.

This year, the output was 60,000 forced plants in eight weeks, available from the last week of February to mid-April. “These early Rhododendron are predominantly sold in Southern Europe where spring arrives earlier inviting customers to put Rhododendrons on their patios,” outlined Leybaert. 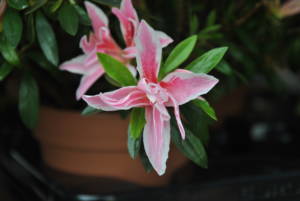 The company’s pride is the own breed Azalea japonica Pink Spider with fringed pink flowers,

Struggling with low prices Leybaert is looking to diversify into blueberries and Chameacyparis lawsonia Elwoodii to shore up returns. “Prices for Rhododendrons have basically remained unchanged over the past 15 years. This is not a healthy situation so at some point you have to diversify.”

Leybaert emphasised he is not getting out of Rhododendrons but certainly wants to sell blueberries and see how customer demand will evolve. “We started only two years ago, growing a handful of royalty free-varieties. The first results are very promising. Blueberries proved to be very popular with the modern consumer who is constantly looking for healthy food. Since the beginning we’ve already tripled our production volumes. ”

Another shining example of product diversification is the production of Chamaecyparis lawsonia Ellwoodii for indoor container combos which enjoy strong demand in the French market. “These arrangements are used for decorating graves on All Soul’s Day and for holiday decorations. Our Ellwoodii differentiates itself by being somewhat taller than other mini trees available on the market, allowing some additional height to the plantings.” The sales of Chamaecyparis is highly seasonal and run from November 1t until December 31. This crop is responsible for 15% of the company’s turnover. 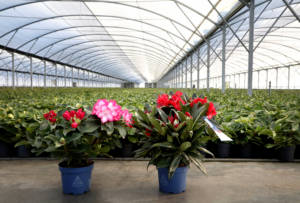 Located in a hail-prone area and having incurred hundreds of thousands of euros of hail damage over the past ten years, Leybaert decided to build a 1.5ha retractable greenhouse. Energy screen is used as roofing and side walls. In summer, the energy screen is replaced for an anti-hail net which stays in place, throughout the growing season. The greenhouse can be closed within four hours.

Almost all of Leybaert’s products are sold for export, half of them are exported directly and half are handled by exporters. “As Leybaert only grows prefinished plants, the auction doesn’t play any role in Azalea sales. Although my Azalea customers of course do sell their plants through the auction. In Rhododendron, the situation is completely the reverse with up to 25% of our turnover generated through the Plantconnect  intermediation services of Royal FloraHolland. We are delighted to have the auction, the world’s biggest sales platform for ornamentals only one and half hour’s drive. We are currently candidate member which prepares customers for a full membership within five years. This means we have to market at least 20% of our turnover through the auction, an additional 10%  of the turnover each year. After five years, and 70% of your turnover realised through the auction, full Royal FloraHolland membership is granted. Everything is running smoothly with the only issue being the pre finished Azaleas being calculated as turnover. Here our views differ but I am sure we will come to terms.”

Azaleas: a powerful symbol of the Ghent area

Azaleas are a quintessential product from the Ghent area Almost 85% of today’s European Azaleas come from East Flanders.
The Azalea area has seen a 43% decrease over the past 10 years, from 202ha in 2006 to 115 in 2015. Leybaert estimates that today Belgium hosts around 95 growers who are professionally involved in Azaleas.
In 2010, the Ghent azalea was designated with a PGI (Protected Geographical Indication). This made it the first European ornamental plant product to be so recognised. To be able to offer an Azalea as a Ghent Azalea, both the plant and the nursery have to comply with strict quality requirements. In other words, when you buy a Ghent azalea you are taking home a local product of top quality!