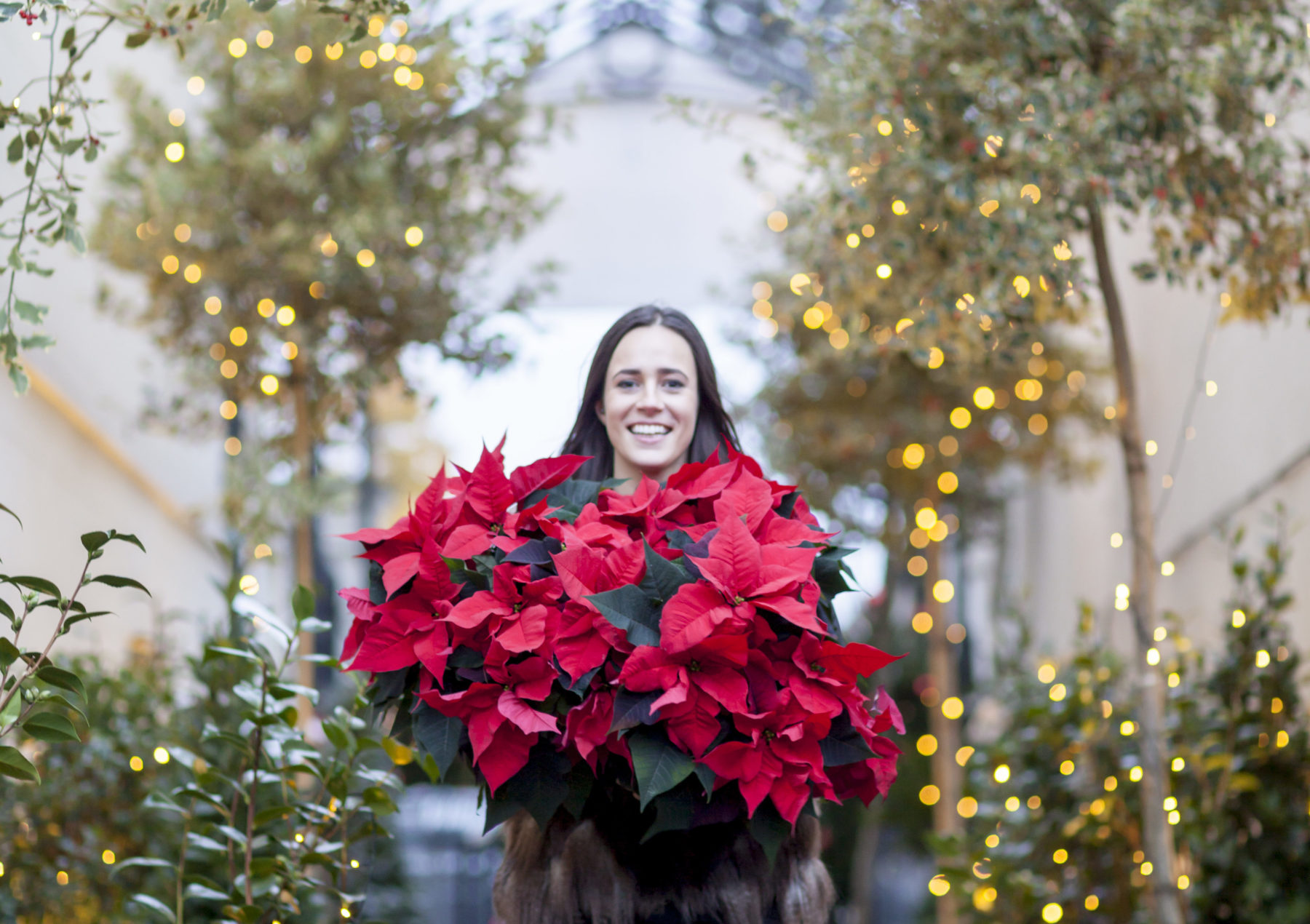 The Poinsettia trade and consumer campaign Stars for Europe (SfE) began 17 years ago. Considering most flowering pot plant purchasers today are over 65 year old, a particularly fierce competition that European Poinsettia growers face in the potted plant business is (un)conventional competitors moving in on Poinsettia’s share of wallet. However, the vision for the marketing initiative has remained unchanged, says campaign leader Dr. Susanne Lux.

The ‘Stars for Europe’ campaign is a European programme  for the generic promotion of Poinsettias across 19 European countries and represents about 93% of the EU production of Poinsettias. Since 2011, the campaign has been approved by the European Commission and received EU funding with co-financing from European Poinsettia breeders Dümmen Orange, Selecta One, supported by Beekenkamp B.V. and MNP Flowers. The current EU campaign (number 734346) is 20% financed by breeders and 80% by the EU. The total sum of this campaign is about 1.7 million EUR.

“Stars for Europe is the perfect example of how the green industry can work together successfully to highlight one of the most beautiful products on earth and to bring Poinsettia’s beauty to more homes Europe-wide. The reality is, consumption of flowers and plants is decreasing in major markets such as Germany, because they are a mass product that is being replaced by other goods, even plastic ones,” says Susanne Lux who has managed SfE from the outset.

On the topic of Poinsettia’s unique identity and value proposition, Lux says that Poinsettias ”are all about Christmas, a festive mood. Their wonderful colours brighten homes when daylight is fleeting. And they are only available for a couple of weeks, and like any other seasonal product such as Ferrero Rocher and Lebkuchen, everyone is expecting them.”

Despite all the marketing muscle behind the Poinsettia little is known about the many faces of the plant. Lux: “Take Princettias. They come in a range of colours, including pink and white. They are great for reaching younger target groups, but these colours represent more or less niche markets. There are yellow varieties for autumn, and they come in unusual curled shapes and rose forms too, so often specialist journalists are looking for these. But of course, for the mass market red is a firm favourite. Up to 75% of European grown Poinsettias are red.”

However, specialty varieties face a problem as they are usually offered by florists, garden centres and retail gardeners, thus only a limited number of outlets and often for a short period of time at the beginning of the holiday season. Consumers spot them in mainstream magazines but often cannot find them in supermarkets and discount outlets.

Around 110 million Poinsettias are produced each year in Europe by growers who all share a serious passion for their job. How does one convey this passion to the European consumer? “Generic promotion is strengthened by sharing that passion with others and passing ideas, marketing tools and messages onto colleagues, suppliers and customers who all have the same goal – selling more Poinsettias,” outlines Lux

She encourages European growers to come ‘on board’. “Use the material we produce. From our trade-facing website, www.sfe-web.com, we provide POS material for print usage along with various other tools such as quality and care icons that can be used as stickers as well as videos and guidance for Poinsettias in transit, in store and more. We have our own MyPoinsettia YouTube channel to educate and inspire the trade in care and handling, training florists and inspiring consumers interested in craft and DIY.

When asked to reveal a surprising Poinsettia fact which might be unknown to the general populace, Lux points out that within the EU there’s a big differences in trends and traditions. There’s a lot to be said for the name, for example in Germany it is known as Weihnachtsstern, directly translated as ‘Christmas Star’, while in countries like the UK it is simply known as a Poinsettia so that link to Christmas isn’t quite so strong when it comes to communication and marketing messages.”

Do not work in isolation

SfE’s long-lasting campaign might trigger some jealousy among other typical Christmas crops such as Amaryllis, Christmas cactus, Christmas rose and mistletoe. “To get access to EU funds the industry should really work together as an umbrella group. In the past, in Germany this was the responsibility of CMA, the Centrale Marketingagentur der deutschen Agrarwirtschaft. In the Netherlands, this is done by the Flower Council of Holland. Working in isolation will mean forfeiting knowledge. Now, financial support from the EU has been limited to six years per country. “

The main criteria for being granted financial support are being the representative for a market, working together with other countries and setting up a good proposal with efficient measures based on sound market data. Most importantly, winning the grant is only the first step. Having knowledge of how to organise campaigns so that you are not later overwhelmed by the administrative burden is another important factor.

Since 2011, the marketing initiative has been supported by the EU in some countries. Lux:  “All countries within the EU can be supported. Technically there is no limitation. However, you need sound market data for every country chosen and it’s important to have a stable partnership with trade-related organisations in each country as well. Ideally, you need agencies with experience in both generic plant marketing and EU funding.

In terms of sourcing market data, in the past SfE has used Productschap Tuinbouw and also producer and grower organisations (for example, in the UK). In Italy we work with ISMEA and in Germany, sound long-term data comes from GfK and has done so for 20 years. In France, it’s Val’hor. Market data can also be sourced from several other channels, for example research conducted by a garden centre chain.

Looking back on 17 year SfE, Lux is satisfied that the campaign is proving effective relative to other markets because the Poinsettia market has remained stable while the general market for indoor pot plants has decreased. “GfK statistics show that we were particularly successful in reaching the younger target groups.”

SfE is all about branding. What is Suzanne Lux’s personal Christmas brand? “Our Christmas decoration starts with a yearly Thanksgiving Party at the end of November. We took over this tradition from our American Pastor and since 2000 we’ve celebrated it in our house. From then on, our house is full of Poinsettias – Christmas is about being thankful.”

The positioning of the Poinsettia as a cut flower should be considered as an additional marketing tool that doesn’t dig too deep. “The cut flower industry is a world apart and few Poinsettia varieties are used as a cut flower in a big way. However, it can be a vital part of the PR message used to reach consumer media as journalists are often looking for an interesting or unusual angle.  It’s not something consumers are likely to do on a huge scale, but it can be an effective way to create memorable marketing messages about Poinsettias.”

Poinsettia as member of the milky Euphorbia family is probably not the easiest flower to use in a bouquet.  Research on shelf life has been done and SfE share the proven technique which involves sealing the milky sap so it doesn’t leak. Trials have shown cut Poinsettias can stay fresh for up to two weeks if the cut stems are held in 60°C water for a few seconds immediately after cutting, then dipped in cold water.