Home > EventsNetherlands > Plantarium capitalises on the popularity of sustainability

Plantarium capitalises on the popularity of sustainability 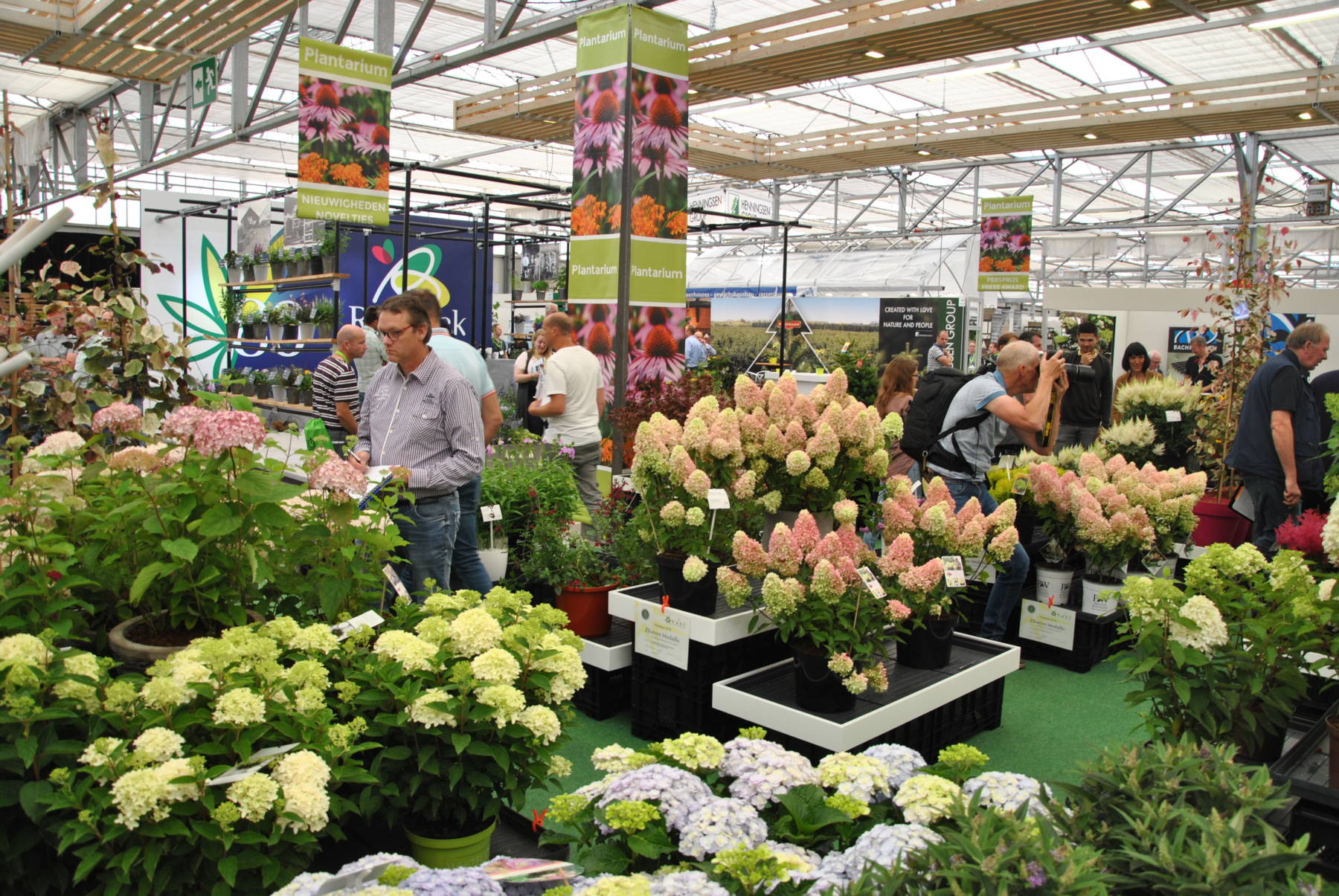 BOSKOOP, Netherlands: At this year’s nursery stock show Plantarium (August 21 – 23 ) even the most ardent environmentalists risked eco-overload. Through the trees of the Tiny Forest, at the crossroads of eco trails, beyond pots and trays made from waste plastic of refrigerators and a jungle of eco-labels, trade visitors were lucky to find a sizeable number of new plants. 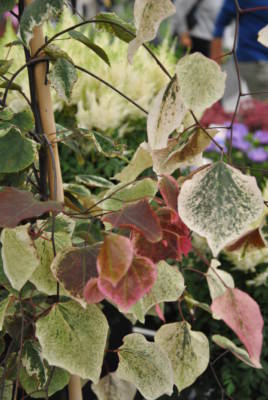 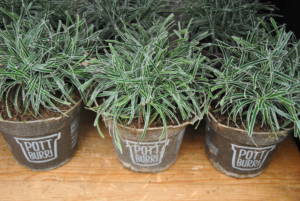 F.N. Kempen’s Pottburri, a brand of biodegradable pots, scooped up Plantarium’s  Concept Award. The company’s Director Sander van der Vaart told FCI that the idea behind Pottburri is to reduce needless waste going to landfill. He hopes this new biodegradable pot will encourage fellow growers to step up production in Pottburris, which are made of sunflower seeds shells.

F.N. Kempen’s annual production currently stands in excess of 4.5 million units encompassing perennials, grasses, sedges and exotics with Lavandula, Heuchera and Ficinia set to make a ‘modest’ debut in 18 cm Pottburri pots beginning next growing season. Pottburri pots will cost the grower €0.28 while the price of a standard plastic pot is between €0.06 – 0.08. Plants in Pottburris will be more expensive than in plants in conventional pots, says Van der Vaart who thinks that in some segments of the market people are willing to pay more for non-plastic pots.

In terms of cultivation, Van der Vaart sees no difference in growth and handling between plants in Pottburri and plastic pots and believes the water loss through the wall of bio-based pots is negligible as Pottburri plants don’t require more watering. As Pottburri pots – made by a German manufacturer of Nespresso cups –  degrade quickly, they are only suited for short crop cycles of 12 to 15 weeks. Van der Vaart believes that consumers will take Pottburri’s degraded look on the retail shelf for granted. “At least, it’s proof that no plastics were used in the manufacturing process. As such Pottburri pots can be planted with the plant, or thrown in the compost, once used.”

F.N. Kempen is a family-run plant nursery with a 10 ha production site at Mijdrecht. One of its flagship products is the decorative sedge Ficinia ‘Ice Crystal’ featuring mid-green leaves lined with white.

Cercis canadensis ‘Caroline Sweetheart’ (pictured) won Plantarium’s Innovation Award. This tree is noted for its variegated foliage that first emerges in reddish-purple hues. Over time, the heart-shaped leaves transform into green with white edges. Submitted by Dutch tree grower John Stolwijk from Boskoop, this award-winning redbud was developed as a collaborative project by North Carolina State University and Star Roses and Plants Nursery.

The Concept and Innovation awards were announced on the first day of Plantarium by Ann Richardson, editor of Sweden’s horticultural trade publication, Viola.

Boskoop’s Royal Horticultural Society, KVBC, in turn, crowned Clematis tangutica ‘Little Lemons’ as best novelty new plant of the show. ‘Little Lemons’, featuring bell-shaped blooms in soft lemon, was submitted by Clematis grower J. van Zoest from Boskoop, who found this clematis by chance as a seedling somewhere in their nursery. Clematis expert Raymond Evison from Guernsey saw many plants like this growing wild in China and old parts of Tibet over many years during his trips into those areas. He says, “They just seed themselves readily in the wild all over the place. ‘Little Lemons’ might be more naturally compact than what I have seen in the wild, not sure.”

Evison saw the new clematis  was being marketed as ideal for hanging baskets and thinks that it might tolerate dry conditions better than other hybrid clematis because of its fine fibrous root system. “However, I would think that in a border it would get very woody at its base and may look very untidy after a few years. It needs to be trialled for several years for this to be assessed. If it was grown in a container on the patio then I think the same thing would happen. It would look good for a few years and then look straggly and would need to be replaced. But if planted with other plants in the containers it would certainly look better and make a good planting combination.”

The words ‘kerbside recycling’ and ‘taupe pots’ alone are enough to ignite a fiery debate in the stand of Cammeraat Potcultuur, a household name in decorative grasses. Company owner Jos Cammeraat finds the unprecedented backlash against black pots unjustified. “Almost all our plants are grown in black square round pots from Dutch-based plastic manufacturer Kreuwel Plastics, a company that has strong green credentials.” He says his black pots are made out of 100% recycled material and can be reused for recycling once finished with. “Therefore, a ‘100% recycled’ message can now be found on the bottom of our pots. Instead of banning black pots I believe a solution is needed to make black pots identifiable in the recycling process.”

How to make sustainability profitable? That’s the question for the Lily Company, a grower of specialty lilies such as the delicate woodland lily Lilium martagon. Major retailers are increasingly  under pressure to reduce the environmental (and social) impact of the products they sell. In response, Lily Company developed a range of PlanetProof-certified Martagon lilies in custom-made colourful packaging after German discounters showed interest in the eco lilies. However, when Lidl and Aldi found out that they were 15% more expensive, they opted for the standard bulbs. Demand from bulb exporters is extremely weak, that is, zero. So the company is not sure whether it will continue to grow PP bulbs next year.

Beginning next spring, Dutch-based perennial nursery Griffioen Wassenaar will deliver its plants in pots and trays made of 100% recycled plastic. Partnering with plastic manufacturer Modiform, the plant grower is setting up a collection and recycling service for its retail customers. Waste plastic from refrigerators will be transformed into plant trays while consumer waste will be used in plant pots. 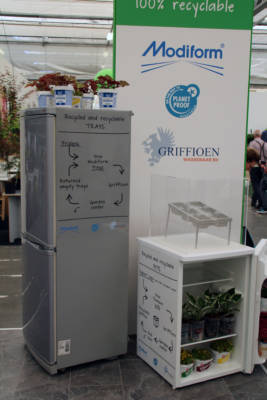 Stefan Verbunt, director at Griffioen Wassenaar, says the initiative is the next step in the company’s recycling journey to create a closed-loop process, “Our goal is to use the plastics at least five times. As a result, fewer commodities are needed and fewer plastics will  get into the environment.”

Working with garden centres and Modiform, Griffioen will set up a collection and recycling programme which aims to ban all ‘single-use plastics’. Returned products will be recycled by Modiform. The return flow will be organised in a cost-neutral way. The investment costs for the new tray and pot will be covered by Griffioen Wassenaar and Modiform as investment in a sustainable future.

The new, recyclable trays will be easily recognisable by their light grey colour. Modiform produces the trays from plastics extracted from old refrigerators. As basic material for the Griffioen´s square P11 pots, Modiform uses consumer waste. The three distinct colours for the pots will be detected by near infrared and recycled by waste processors. Consumers can dispose of their pots along with domestic waste.

By intensively guiding their customers, Griffioen will make sure that as much recyclable plastic as possible will be collected for re-use.

Griffioen Wassenaar grows millions of perennials on a yearly basis in square 11 centimetre pots. A part of the production is applied, within the  GreentoColour® concept, in public green zones. Before delivery, the plants will be extracted from the pot which will be re-used up to five times. Hello Garden-branded plants will find their way to the customer. The recent PlanetProof certification for Griffioen Wassenaar underlines the company´s attention to sustainable entrepreneurship.

The 37th edition of Plantarium, held in conjunction with the Danish trolley fair Groen-Direkt, took place from August 21-23, 2019. True to the theme of the nursery trade fair, Green Fits All, organisers built a show garden as part of the Tiny House and Tiny Forest movements.

The Tiny House movement, encouraging people to convert to small-scale living started in the USA and gradually swept around the world. Residents of tiny houses are seeking a simpler, more sustainable way of living, inspired by the idea of a circular economy. In such eco-friendly environments, wood is quickly becoming the building material of choice. Other common features of a tiny house include green roofs, vertical gardens and colourful borders.

Rooted in Dutch soil, the Tiny Forest movement encourages people to boost biodiversity by building mini forests that are no larger than tennis courts and planted with a variety of native tree species.

The main entrance of this year’s show was the departing point of the Novelty Trail which was an excellent way to discover new plants and services offered by the 300+ Plantarium exhibitors. Plantarium 2019 showcased a full range of nursery stock products for the consumer and institutional markets. Horticultural supply companies, in turn, focused on the latest developments in technology.

Among FloraCulture International’s favourites was Astilbe ‘Mojito’ (pictured below) standing out for its feathery, cream white panicles with green tips. 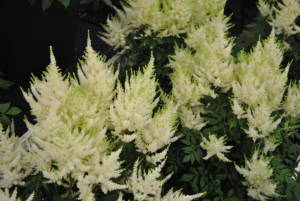 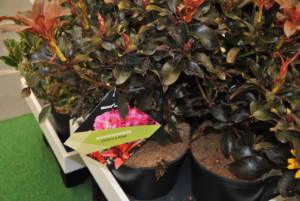 Among FCI’s favourites were Astilbe ‘Mojito’ (left) and Rhododendron Choco&Pink.

(The plant grows approximately 60-65 cm tall and blooms in June/July. Another showstopper was Rhododendron Choco&Pink, submitted by Best-select, a consortium of 17 wholesale plant production nurseries from Flanders. This new variety grows 2 – 3 metres tall with red/pinkish flowers which rise above dark brown foliage.

Organisers told FCI this year’s show attracted 11,100 industry professionals with international visitors coming from 53 countries. The largest number of visitors came from Germany (16%). The Belgians were second (15%) and third place was for Italy (11%). The UK was fourth on the list (11%) and France fifth (9%).

Plantarium 2020 will be held from 26 to 28 August 2020 at the International Trade Centre at Denemarkenlaan in Boskoop/Hazerswoude.