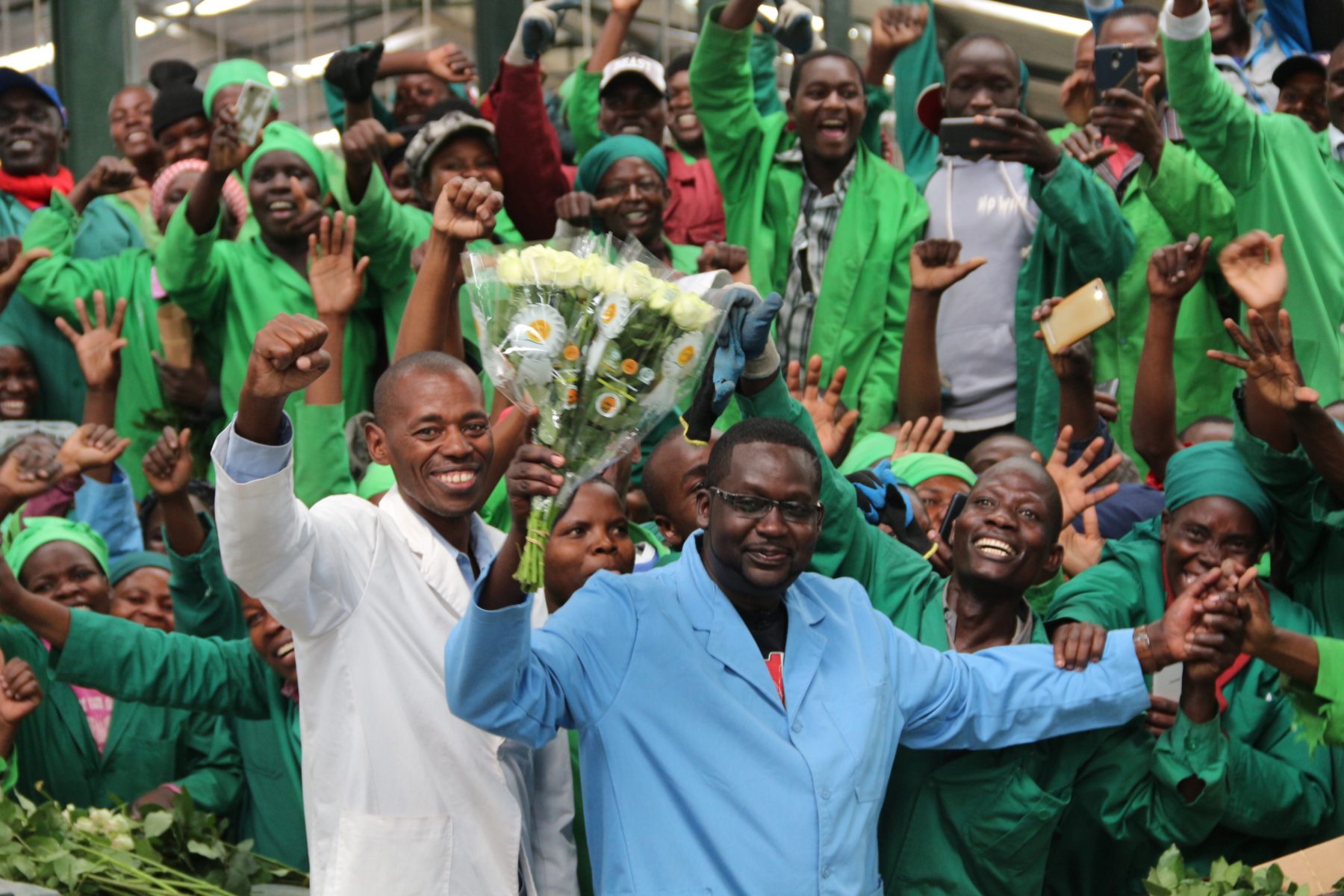 NAIROBI, Kenya: Kenya’s top comedian Daniel Ndambuki, aka Churchill, brought the giant flower producer Oserian to a standstill when he visited the farm  in preparations to shoot his weekly comedy show Churchill Show.

Popularly known as Churchill, it was hard to tell who between the comedian and the flower farm workers   was more thrilled.

While he was visibly mesmerized by the colourful show of a mix of variety and colours, at the vase room, the workers were equally star-struck as chants of Churchill, Churchill rent the air.

Mr Ndambuki is staging the Love Edition of Churchill Show, aired on NTV on Sunday evenings from 7.30 – 9pm.  The Love edition will air on Sunday March 4 2018.

Vuvuzela, a niche market flower variety exclusively produced at Oserian for the high end market caught Churchill’s eye.  The variety was launched during the World Cup in South Africa, when the instrument was the most popular signature of the globe’s biggest sporting event.

Since then, Vuvuzela is still blowing in Kenya, years after the tournament.  At the Vuvuzela greenhouse, one of the farm’s best kept secrets, Rose grower Anton Koning who conquered the flower, reputed as a difficult one to grow by managing to successfully produce it despite its being a hard to please variety,  didn’t disappoint.  Asked what he calls himself, he aptly responded, “I am the Crazy Dutchman”.  For many years,  he was baptized Mr Vivuzela, having been brought into the farm to purposely grow the flower and succeeded. He is now in charge of the Queen of Africa, another of Oserian’s top products, a  white big-headed-long stemmed flower arguably the continent’s best among specialty roses, and  bred by Select Breeding.  Vuvuzela is a breed of De Ruiter East Africa.

Both varieties are raised at Oserian due to the farm’s geothermal heating that creates a managed environment that supports the required optimal growing conditions without which it is impossible to get the best quality.

At the farm’s pack house, housing the greatest concentration of workers, Administration Director Kirimi Mpungu had to intervene to avoid disruption of the production schedule as staff downed their tools when Churchill entered the venue.  He was literary escorted out of the pack house, waving to an excited crowd, promising to return.  Pack house division head Martin Kabaka, initially thrilled when Churchill invaded  into his territory quickly got alarmed when push came to shove, his main concern being the clock considering flowers are time sensitive. He breathed a sigh of relief when Mr Mpungu, who seems well conversant with crowd control psychology pacified the situation, persuaded his team to go back to work and Chruchill’s team to move into the next station.

As he walked out, Churchill was overheard  heard saying ‘Oserian si Kenya’,  loosely translated as this is not Kenya, a phrase Kenyans use when they encounter an impressive, well organized place.   Oserian, the Place of Peace as its name means leaves a lasting impression on anyone who visits it.

Churchill next station was the farm’s  Hilltop Primary School where he met kids for the ‘Kid’s Corner’ part of his show, the children entertained him with responses to his question on what is special about Naivasha. The answers were quick, and unexpected.  What do they know about Naivasha? The lake, hotels, wildlife. Above all, the kids said, Naivasha is peaceful and there is no corruption!