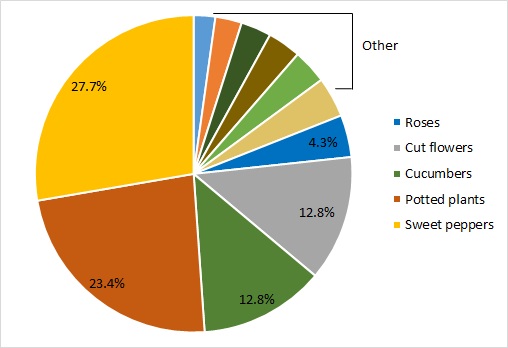 WATERLOO, Belgium: In June 2018, Biobest Nederland performed an online survey of 141 NutrimiteTM users from the Netherlands. Biobest introduced Nutrimite™, a food supplement based on Typha pollen, onto the market in 2013. The product stimulates the population development and improves the distribution of predatory mites throughout the crop.

One third of users in the Netherlands participated in this study. The majority of those questioned use NutrimiteTM for supplementary feeding of A. swirskii, followed by A. montdorensis and, in third place, A. degenerans. In the Netherlands, NutrimiteTM is used primarily in sweet peppers, potted plants, cucumbers and cut flower crops.

Eighty-two percent (82%) of the NutrimiteTM users were satisfied with its effects. The majority of NutrimiteTM users indicated that the predatory mite population in their crops increased by 25% or more as a result.

When we focus in on the crops in which NutrimiteTM is most commonly used in the Netherlands, such as sweet pepper, we see that 90% of current users were satisfied with the results. Here NutrimiteTM is mainly applied in the first two to six weeks of cultivation and respondents indicated that the introduction of the predatory mites (mainly A. swirskii and A. degenerans) as well as the spraying of NutrimiteTM were considered to be relatively easy to very easy.

Of the eight cucumber growers who completed the survey, six were supplementing with NutrimiteTM at the time of the survey. The other two had already stopped, since their growing season had ended. All users questioned were very satisfied with NutrimiteTM and had seen their swirskii populations increase by 25%. The approach varied from grower to grower with some supplementing only during the first two to six weeks; others supplemented every 7 or 14 days.

The spraying of NutrimiteTM and the distribution of the predatory mites was rated as being relatively easy to very easy.

Rose growers indicated that while it was difficult for them to express in numbers the impact of NutrimiteTM on the E. gallicus population, they were generally speaking satisfied with the product.

Finally, one survey respondent conveyed a positive experience using NutrimiteTM in the seed production of open-field vegetables. This grower, who applied NutrimiteTM on a weekly basis, saw his swirskii population increase by an average of 20% and was extremely satisfied with the result.