Nature’s beauty on display at Euroflora 2022 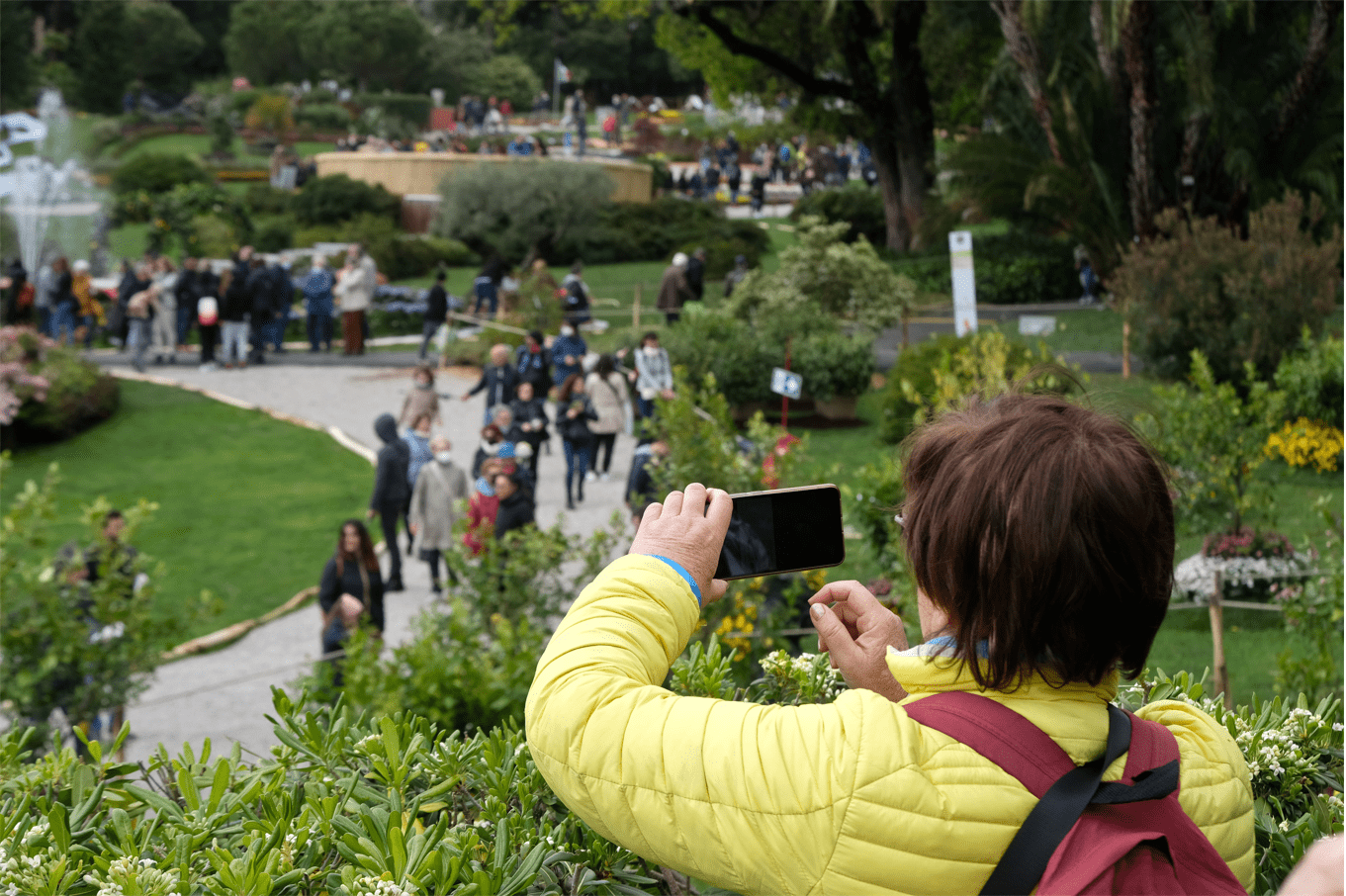 The International Horticultural Show opened in April and ended on 8 May in the parks of Genoa, giving a high profile to the Italian horticulture industry in these challenging times.

The International Association of Horticultural Producers (AIPH) Category C Approved International Horticultural Exhibition could not happen in 2021 due to the continuing restrictions of a global pandemic. Fortunately, the open-air stage for Euroflora 2022 was set and ready for audiences seeking and appreciating the beauty and wonder of an Italian flower show.

The three historical, neighbouring parks of Nervi with overlooking cliff views and three Museums dedicated to the figurative arts of the 19th and 20th centuries are the exceptional settings for Euroflora 2022. With a theme focusing on “A World of Rare Beauty”, this was the 12th International Exhibition of Flowers and Ornamental Plants in Genoa, a port city and the capital of northwest Italy’s Liguria region.

On this Mediterranean canvas, nature displays a sea of colours and fragrances in enchanted gardens designed by national and international participants creating examples of magnificent colours, audacious floral geometry, works of art and blossoming charms of shrubs and trees, all in the evocative context of great historical and landscape value and breath-taking views of the sea.

A Royal visit on opening day 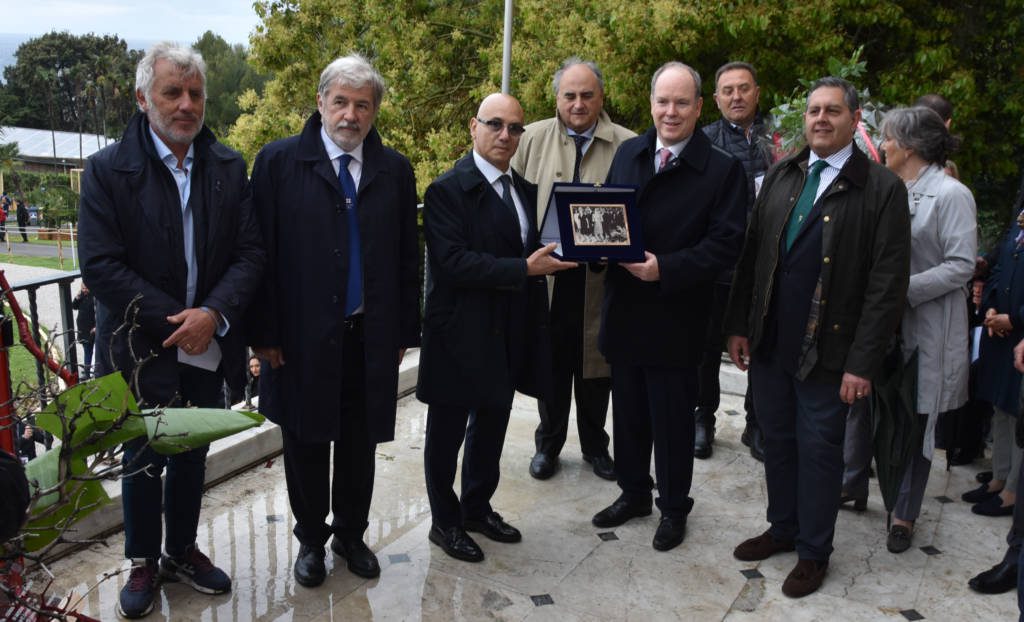 His Serene Highness Prince Albert of Monaco was bestowed with the honorary citizenship of Genoa, sealing a long-lasting bond between Genoa and Monaco.

His Serene Highness Prince Albert of Monaco attended Euroflora on Saturday, 23 April. In the afternoon, at Palazzo Ducale, The Prince was bestowed with the honorary citizenship of Genoa, sealing a long-lasting bond between Genoa and Monaco.

The bond between the Royal Grimaldi family and Euroflora goes back a long way. Princess Grace and Prince Ranieri of Monaco were guests at the first edition of the Show back in 1966, and Grace, who was very fond of roses, came back in 1971. A creamy white rose with petals gently edged with pink carmine, the “Princesse de Monaco”, which grows in the Rose Garden in the Parks of Nervi, was named after the Princess.

Ahead of its opening, all pavilions and displays are judged by a jury of 103 highly qualified experts in botany, agronomy, landscape design, composition and art. Alongside AIPH representatives, they all shared the tough job of viewing and marking more than 90 gardens on the eight hectares of Parco Gropallo, Parco Serra, and Parco Grimaldi dotted with multi-centennial trees, Mediterranean vegetation, tropical specimens and new plantings.

There are 256 competitions, divided into honorary, design and technical rounds. The President of Euroflora’s International Judging Panel is Arturo Croci, an industry veteran and former publisher of horticultural media outlet Flortecnica. The president of the national judging panel is Ettore Zauli, agronomist, former director of the Landscape Department of the Municipality of Genoa, university professor and a longstanding leading figure of the event. The award ceremonies happen at Euroflora 2022’s closing. 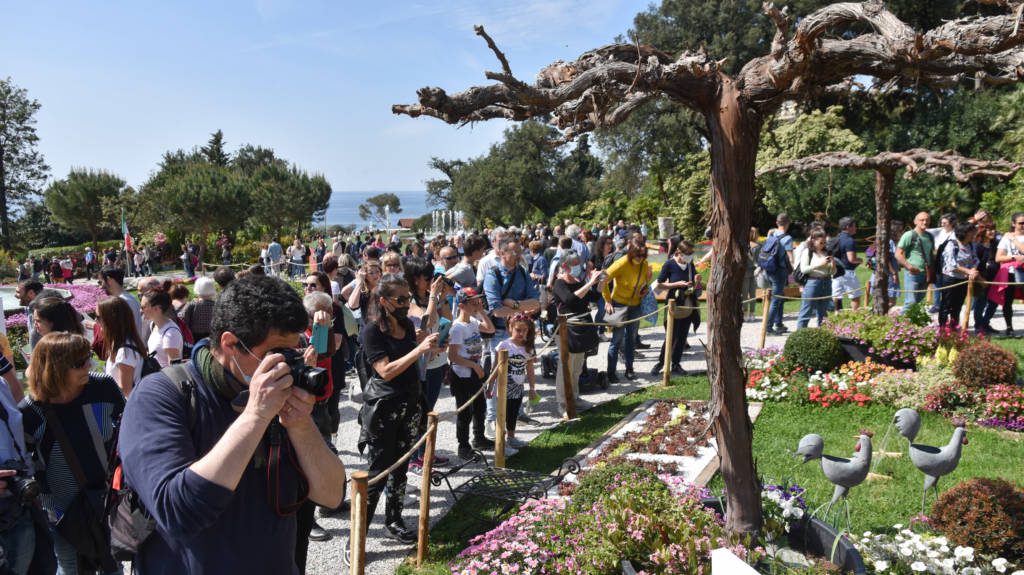 Visitors capture the beauty of the gardens on camera.

The presence of international participation is valuable to the success of Euroflora, and this edition is exceptional. It includes the Netherlands with a large display conceived by the Expo 2022 Floriade designers of the Niek Roozen Landscape studio, taking inspiration from the Dutch Expo’s concept of Green Cities. It has a living bouquet of colourful flowers arranged around a pond. It features aquatic plants, ornamental grasses, perennials and bulbs: an invitation to plant more greenery and flowers on one’s balcony, garden, and neighbourhood to promote better urban living. Other countries in Genova are the Principality of Monaco with its Jardins Exotique, China representing the China Flower Expo for the second time, France with the Floralies of Nantes, now twinned with Euroflora, Spain, with a garden dedicated to the traditional event of the city of Murcia, the Entierro de la Sardina, and the United States with the city of Columbus (Ohio).

National participation showcases a journey through Italy’s great regional collectives, from north to south, showcasing important exhibits from producers of nursery plants and typical flora. It starts in Piedmont, focusing on acidophilic plants, and moves through Liguria, specialising in aromatic flowers and succulents and Sardinia, Marche, Campania, Apulia Calabria, ending in Sicily. Emilia will participate with its tourist district. The National Association of Italian Municipalities (ANCI) will celebrate the small hamlets and pay tribute to the Unknown Soldier. Genoa, Rome, Sanremo, Imperia, Andora, Savona, Cogoleto, Bogliasco, Sori, Campo Ligure, the United Municipalities of Valle Scrivia, and Ovada are participating individually.
With a strong commitment to sustainability, many exhibitors will donate their plants to be replanted in public green areas in the city and the Region at the end of Euroflora 2022.

Novelties, rarities, and curiosities on display

More than 300 organisations are also bringing success to Euroflora 2022 and will showcase their products.

The “Rosa di Genova” (Genoa rose), born thanks to the cooperation between Genoa Garden Club and NIRP International, will debut at Euroflora: a bushy rose with large white and red flowers, the symbolic colours of the city of Genoa. Beautiful, strong, reblooming, and resilient to changes in climate, it will become a cheerful symbol of the Ligurian capital in gardens and parks worldwide.

From the cultivations of Echecactus Flor, a company based in Bordighera and specialising in succulents comes the new “Echeveria Serena”, patented with the company owner’s daughter’s name.

“Petunia Allegra”, presented by the Farao company as part of the Regione Campania collective exhibition at Villa Grimaldi, will also make its official debut. This is the first 100% double-flowered petunia that can be used as a cut flower; the variants are white, purple, pink, salmon pink and two-tone.

“The dream of an Italian tea” sums up the essence of the participation of the Compagnia del Lago of Verbania. For the past ten years, it has been cultivating the first sizeable European tea plantation in the Alps, on the shores of Lake Maggiore, after meeting a family of Florentine entrepreneurs committed to finding the best tea in the world.

As for citrus fruits, the most intriguing news comes from the Cinelli Nurseries group, made up of five companies from Tuscany and Sardinia, and from the Sicily Region group. The former will delight visitors with Sa Pompìa, a variety of lemon endemic to the Siniscola area of Sardinia, one of the rarest citrus fruits in the world, rediscovered only a few years ago. Inedible when raw, it is an excellent natural remedy and the main ingredient in the traditional dessert Sa pompìa intrea; in a jam, liqueur, and to make s’aranzata thinoscolesa, a typical wedding cake made of candied peel and almonds. The latter will showcase the fingerlime or Microcitrus australasica, typical of Australia’s eastern subtropical coastal area, successfully cultivated in Sicily and commonly known in Italy as Limone Caviale or Citrus Caviar due to its round juice-filled vesicles, resembling caviar. With its unique flavour and the beauty of its pulp, it is used as an ingredient in all kinds of culinary preparations, from simple dishes to gourmet ones. This citrus fruit has antiseptic properties, aids digestion, and is refreshing and diuretic. It provides good amounts of vitamin C, vitamin B6, folic acid and potassium.

Among the botanical peculiarities on the show are the baby plants of Milone Nurseries of Lamezia Terme, within the collective exhibition of the Italian Nursery Association. Born in micropropagation laboratories, these are miniature plants, often smaller than the fruit they will be able to generate once they become the average size and will display in small pots or test tubes.

The Beigua Park has several exclusive, protected endemic plant varieties. These include the Bertoloni violet, the Voltri Peverina (Cerastium utriense), the Aquilegia of the ophiolites, and the Daphne odorosa (Daphne cneorum), the tiny pink flower that is the symbol of the Park. These are the serpentinophytes, plants that grow on the “green rocks”, and the ophiolite rocky sub-layer typical of the Geopark.

A real gem awaits in the exhibition area of the Bonsai Art School. It is “The Woods of the Woods”, in Japanese Yose-ue, a collection of “Bonsai Woods” belonging to the collector Giovanni Genotti of Turin, one of the first and best-known Italian bonsai artists. Consisting of grouped plants that represent the harmony and balance found in nature in the woods, it features plants coming exclusively from Italian tree species, both from nurseries and located in the wild (yamadori).

An extraordinary collection of 20 sage cultivars, the result of research carried out by the Sanremo-based CREA – the Italian Research Council for Agricultural Research and Analysis – will be displayed in the area designed by the University of Genoa’s Degree Course in Landscape Architecture. 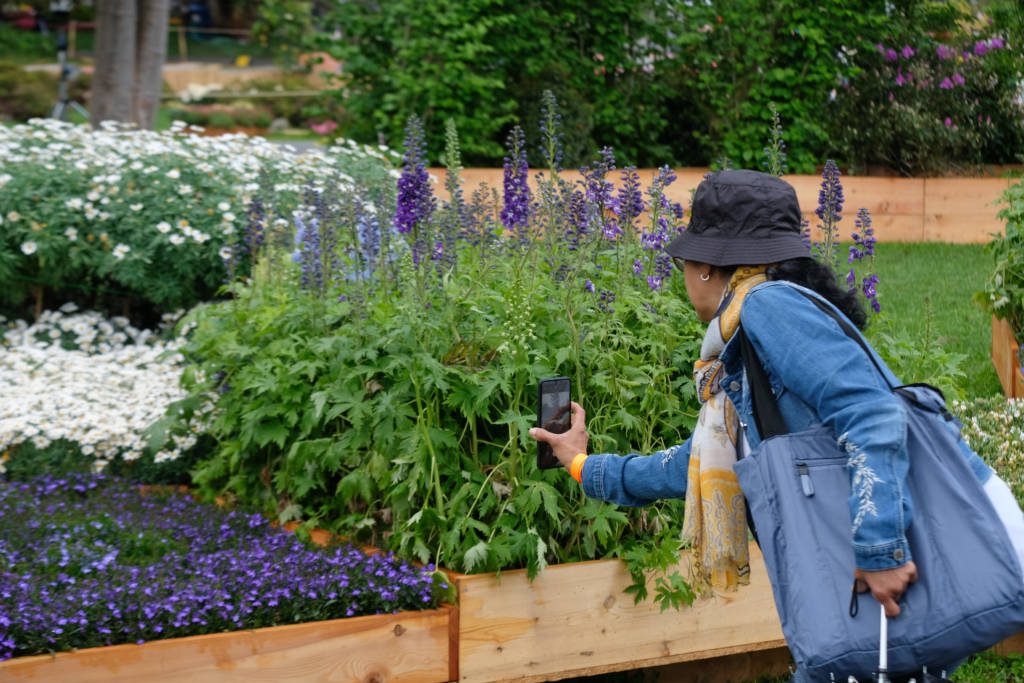 Euroflora 2022 displays are really engaging the public with horticulture.

Euroflora 2022 is an event to celebrate and support the horticultural industry through these challenging times. Census data from Mipaaf, Istituto Crea, ISTAT and Trade Data Monitor was processed by the Italian Trade and Investment Agency (ICE) to show that nursery gardens were initially one of the markets most affected by the pandemic. Still, after a rebound that began in 2020, it registered a record increase of 33% in exports of Italian plants in the first quarter of 2021, a trend that continued in the following months. Today, the unknown factor is tied to recent increases in raw materials and energy prices, potentially slowing growth. The 28 European countries are the primary outlet market for Italian products (84 per cent). The countries where the percentage of exports has increased the most are France, the United Kingdom, Belgium, Switzerland, Spain, and Romania. The main import markets for Italy are the Netherlands, firmly in the lead, followed by Germany, France, Spain, Belgium, and Greece. The ISTAT census also shows that approximately 24,000 companies produce ornamental plants in Italy, of which 15,000 grow flowers, and potted plants and 8,000 are nursery gardens. They mainly concentrate on four regions: Liguria, Lombardy, Tuscany, and Campania. For nursery gardening, based on ministerial data, Tuscany, Lombardy, and Sicily are in the top three positions, while for plant and flower markets, Liguria, Sicily and Campania rank highest.

Italy’s flower and plant growing sector account for five per cent of the national agricultural GDP, with a turnover of 2.8 billion euros and a related industry production chain that employs over 100,000 specialised operators.

Mauro Ferrando, President of Porto Antico di Genova SpA and a Euroflora 2022 organising team member, says, “We are proud to present the details of Euroflora 2022, the result of a process that started in 2020 with AIPH’s international approval. The Liguria Region’s classification of Euroflora as an international horticultural show has been rewarded by the high quality of the exhibitors of this 12th edition.”

He adds: “For two weeks the spotlight will be on a market that, after the recent and traumatic standstill caused by the lockdown, has witnessed a brilliant recovery in exports, which have so far increased by over 30% and which we hope will continue to grow despite the rising costs of energy and raw materials. The sixteen days of Genoa will be the ideal time to present the state of the art of the industry and its innovations and excellences to the public, to garden enthusiasts, and to people of the trade.”

This article was first published in the May 2022 FloraCulture International.