Varades-based (Loire Atlantique, France) greenhouse construction company CMF Group takes great pleasure in building  many hectares of traditional Venlo greenhouses for tomato production. However, it’s with the same pleasure that the company also designs less conventional, customised greenhouse projects whether it is a tropical conservatory for a zoo, an urban rooftop farm, a research facility or a spectacular glass roof for a museum.

CMF Group has made a name for itself worldwide with its out of the ordinary greenhouse projects. The motto for every project is: “Mastering the climate!“

The company prides itself on over 50 years of experience in greenhouse construction. Founded in 1962 under the name Constructions Métalliques Florentaises in Saint-Florent-le-Vieil, only a few kilometres away  from its present location, CMF mainly fabricated greenhouses for local plant producers in the beginning.

The company entered the international arena in the early 1990s and expanded its customer base by including garden centres. At the end of the nineties the companies SOVAM (Venlo greenhouses) and BN Serres (foil houses) partnered with CMF Group. Following Renaud Josse’s (pictured) appointment as the company’s chairman in 2009, the number of special orders for research institutes, public and private buildings, zoos, museums and much more rose significantly. 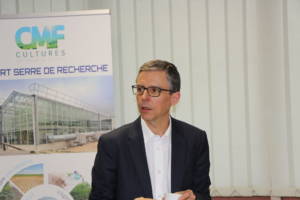 Today, CMF Group is comprised of three divisions. CMF Cultures specialises in the construction of greenhouses, including interior greenhouse engineering for fresh produce growing as well as research greenhouses divided into small compartments and fitted with special technology

CMF Export offers worldwide design, manufacturing and construction of all glass structures for plant production or other purposes. Thanks to its collaboration with suppliers such as glass manufacturers and interior designers such as heating engineers, LED manufacturers, climate computer suppliers, etc., the company is able to automatically control and monitor any desired climate inside their buildings.

Chairman Renaud Josse puts it this way: “We are not the largest greenhouse manufacturer in France. But we’re the only company that can offer the full range of greenhouses, whether covered with glass or foil, including special projects.”

He expects his company to continue to benefit from the booming urban farming trend in the coming years. “In order to be profitable, urban farming should be approached differently than rural food production. Urban farming will never produce enough food for city dwellers, so it should not be seen as an activity that competes with traditional rural fruit and vegetable farmers. The two will complement each other and traditional greenhouse growers can make a vital contribution to urban farming by exchanging their knowlegde.“