Japan sweeps the board at Floriade’s awards and closing ceremony 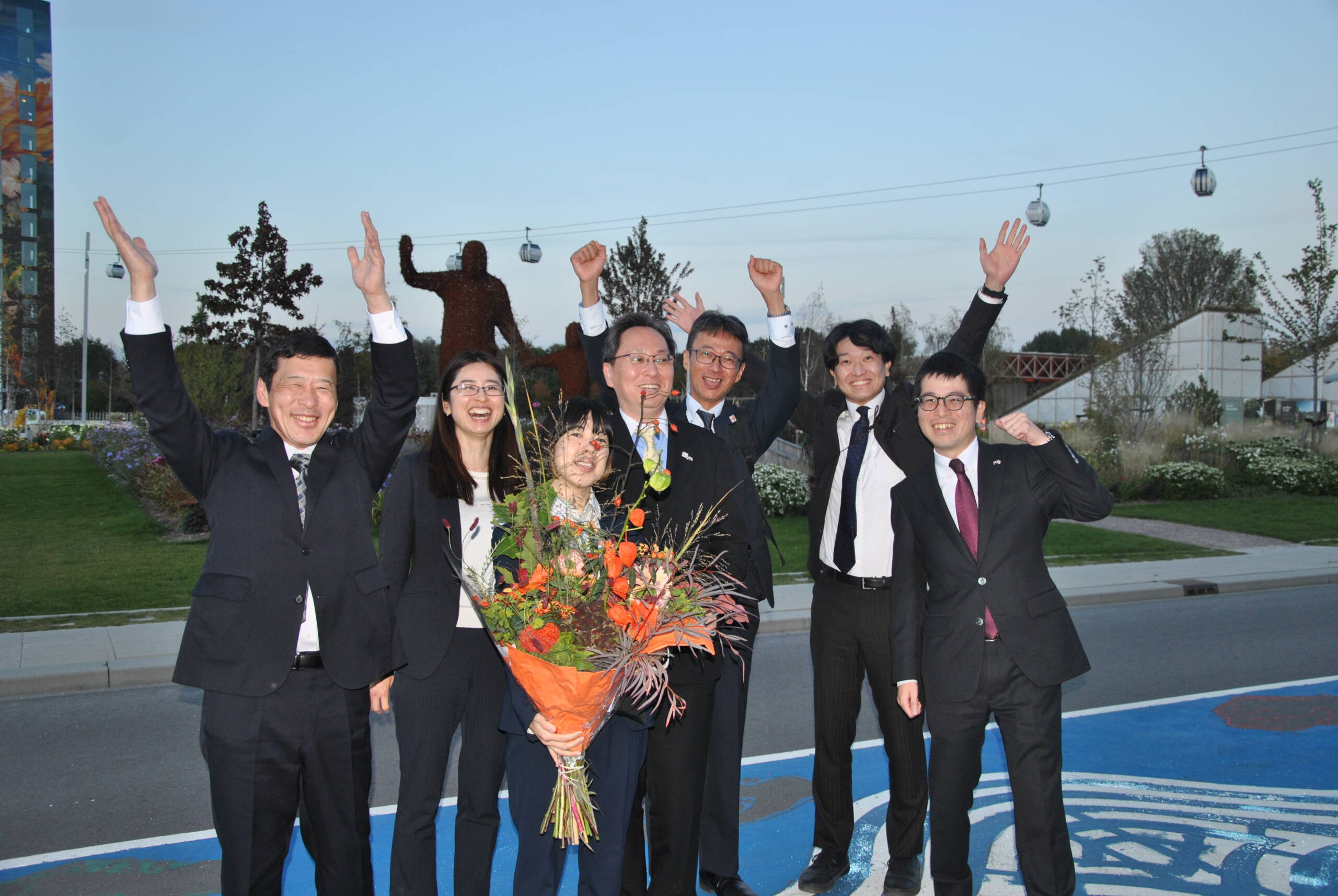 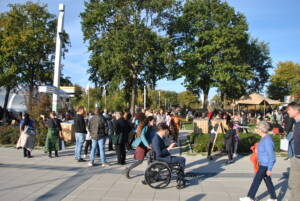 The world horticultural exhibition Floriade ended on Sunday, 9 October, with awards and a closing ceremony at the Expo’s congress centre. People rushed to the 60-ha Growing Green Cities-themed site in the last week to say goodbye to the expo. Great autumn weather and probably a great deal of ‘FOMO’ (fear of missing out) brought out the long-awaited huge crowds.

Life’s philosophers say that you only appreciate something when it’s gone. And we guess that is nothing but the truth. In the long run, when the bitter pill of a severe cost overrun and disappointing attendance figures has been swallowed, things become more manageable, and the eventual benefits become pronounced. And for Almere’s residents, it is a new city district to be known as Hortus. At the core of its development will be the Arboretum, planted with more than 3,000 trees and containing 750 genera, which will turn Almere’s face green for good with generations to come realising that thriving in an urban green space is more fun, sustainable and healthier than surviving in a concrete jungle.

Kees van Rooij, chairman and co-founder of the Dutch horticultural council NTR, whose core mission is to build sector brand awareness and promote sales of horticultural products at home and abroad, spoke wise words at last Sunday’s closing ceremony. He said, “I stand before you truly proud of what we have achieved together. Floriade 2022 has succesfully adressed topical issues such as sustainability, climate change, energy transition, and the need for energy transition and urban green spaces. Its national and international exhibitors have showen how horticulture contribute to finding solutions to the world’s problems.” 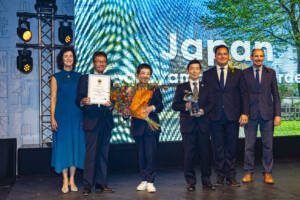 At Floriade’s Awards Ceremony, Japan scooped up the prestigious AIPH Award and the Gold Award. The country also reigned supreme at the Expo’s Best in GreenHouse shows.

He confirmed that, contrary to Floriade 2012, no cities have submitted candidature dossiers yet and that the next six months will be used to thoroughly evaluate the event. He hopes to organise an 8th Floriade in 2032 or develop an alternative tool for sector promotion.

In the presence of high-ranking officials, government representatives, Floriade stakeholders and senior industry professionals, the Secretary General of the International Association of Horticultural Producers (AIPH), Tim Briercliffe, struck the right tone. Instead of dwelling on weaknesses and failures, he highlighted how AIPH-approved horticultural Expos provide a unique showcase for the power of plants. He said, “They bring citizens together with horticulture and demonstrate real green solutions for the future.”

Apart from Floriade, the world has recently witnessed horticultural Expos in Yangzhou, China, Hatay, and Türkiye. And in 2023, Expos in Kahramanmaraş, Türkiye, Suncheon, Republic of Korea and Doha, Qatar will open. The latter will see the first AIPH horticultural Expo in a desert country.

Briercliffe, as chairman of the Floriade Awards jury, went on to congratulate the recipients of the 22 Floriade awards, providing a detailed explanation of how the panel of nine international expert judges defined horticultural excellence by focusing on the educational, experiential, cultural, and sustainable value of pavilions, gardens, and stands. The jury also looked for those winners who made the best use of plants, provided the best hospitality and accurately reflected Floriade’s Growing Green Cities theme.

The Floriade Awards are in line with the regulations of AIPH and BIE, the intergovernmental agency responsible for co-ordinating world’s fairs since 1928. Their guidelines stipulate that awards are handed out in two categories: Official Participants –  those officially invited by the Dutch government – and Exhibitors. The latter are defined as national participants and non-official international participants. Official Participants and Exhibitors vied each for top accolades in the realms of company or organisation representation and garden and landscape design. 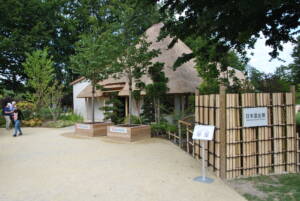 Japan was the only country to be honoured to make the way to the stage twice, as it showed unmatched power of consistency throughout the entire event. The country scooped up Gold in the category ‘Official Participants Indoors’.

Unlike a score of other countries, Japan completed its Satoyama Farm Garden on time before the Expo opening, enabling visitors to enjoy a good dose of zen ambience in its garden and indoor pavilion from day one of Floriade.

Bearing in mind that the distance between Almere and Tokyo is no less than 9,200km, Japan showed how true dedication and commitment matter. Especially in an era of logistic disruption. That you can actually have your garden neatly raked and your last pebble stone and tree correctly placed and planted on time. And that when you are expected to deliver, you deliver. Japan’s timely results also show how inaccurate ‘Because of Covid’ was – the latter arguably being the most frequently heard blanket excuse at Floriade 2022.

The Floriade official jury report reads as follows: “Japan showed a traditional ecological agricultural garden and flower exhibitions in the Satoyama Farm. Every two weeks, throughout the Expo, Japan created a whole new floral display in their pavilion. They brought in expert Japanese floral designers every time, and the standard was exceptionally high. Each display was relevant for the season and the theme while at the same time showing something uniquely Japanese. They should be very proud of this amazing achievement.” 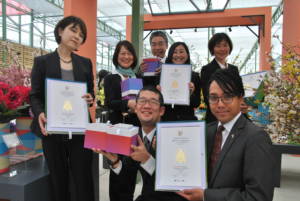 Equally proud Japan should be of their second win, which from a horticultural perspective is Floriade’s most prestigious prize: the AIPH Award. AIPH’s newly-elected president Leonardo Capitanio was on hand to present the top accolade, which he says recognises the cream of the horticultural crop, best horticultural value, and vision. He described the AIPH Award as the highest recognition “for the industry, by the industry”.

He says that out of 13 indoor shows, including 1,200 entries, Japan was present 11 times. “Participating in Floriade for the Japanse is like competing in the Green Olympics so they take the job very seriously, tracing and tracking all entries. From the moment flowers were shipped from Japan to their arrival at Dutch customs, all the way through displaying the flowers in the vase. Each and every time, there was someone to check.” 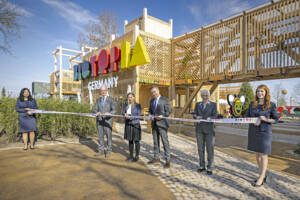 In the Official Participant Garden and Landscape Design category, Capitanio presented Germany with the Gold Award for Biotopia, commenting that “Germany gave visitors an immersive experience in understanding what a sustainable future can look like and the role we can all play. The rooftop gardens showed new ways of living that integrate people and nature. Germany’s team maintained the highest quality until the end, and they deserve the highest praise for their achievements.”

The Dutch Ministry of Agriculture took Gold for its Dutch Innovation Experience in the Exhibitors Indoors category. This three-storey pavilion showed the future of housing construction with sustainability and circularity as key elements. Its building blocks consisted of 95 per cent bio-based materials, most of which originate from the Netherlands. On awarding the trophy to the government representatives, former AIPH president Bernard Oosterom said, “The jury believes this participant fully embraced the theme and gave us a glimpse into tech and ideas that could be part of a sustainable future. The natural world has many answers to our challenges, and both the pavilion and the house translated that into an amazing visitor experience.” 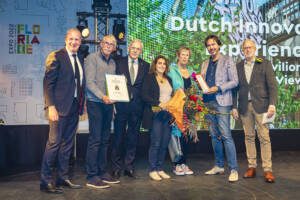 Gold for the Dutch Nature Pavilion.

In the Exhibitors Gardens and Landscape Design category, the Gold Award went to landscape company Lips Groen Hoveniers for its ‘Feel Good Garden’. Oosterom noted, “This garden was designed to stimulate you naturally and put your senses to work. When you walked this garden, you could feel its energy. It has brought strong colours and emotion to the Expo while at the same time being a garden that reaches the heart. This garden design was based on research and experience; people feel better being in a place like this, and the jury definitely felt this too.”

He presented government officials of the United Arab Emirates (UAE) with the Award for the Most Educational Exhibition. In comments, he said, “No-one could go through this garden and pavilion without learning a lot about the UAE’s challenges and the amazing solutions available through the use of plants. The UAE team took care of every visitor and provided a unique experience in the Expo. It was really a wonderful experience.” 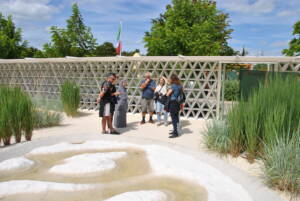 UAE won Floriade’s award for the most educational garden.

Designed by Dynamic Spaces Architects and built by the horticultural engineering company Bransen Group, the 500m² Suriname pavilion was one of Floriade’s eyecatchers because of its different roof heights. The Suriname team’s efforts were recognised by winning the Floriade Cultural Activities Award. Briercliffe said, “You could not experience the Suriname pavilion without feeling like you were there, not only with the plants but with the food and the people too! In their national celebrations, they ‘took over the Expo’, and now we all feel we understand Suriname much better than before and feel their passion for this very green country.”

AIPH awarded Qatar’s Desert Nest exhibition the Floriade Hospitality Award. Qatar’s entry, inspired by nature and life in the desert, offers a forward-thinking vision for sustainable ways to live in harmony with the environment. Briercliffe said, “Everyone was made to feel welcome in Qatar. Not only could you experience the amazing pigeon towers – the tallest 3D printed tower – you could also taste coffee and dates and try on traditional dresses. It was like being in Qatar, and they provided a great way to welcome visitors to their A1 World Horticultural Expo in Doha, opening in just one year.” 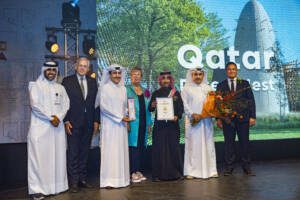 China won the Floriade Garden Experience Award for its Bamboo and Perennials Garden. This garden combines traditional Chinese landscape architecture and the latest horticultural developments. Briercliffe commented, “China has shown the wonder and versatility of bamboo as the underpinning of their garden. They went even further by filling it with beautiful and well-maintained flowering plants. It provided a true garden experience and the perfect place to sit, relax, and immerse in the garden.”

Belgium took home the Floriade Sustainability Award for its garden planted with edible flowers and quintessential Flemish ornamentals such as Azalea and Rhododendron. The jury found Belgium’s pavilion small but big in design, with geometric, playful, contemporary design, and extremely sustainable design. All the materials were fully reusable or biodegradable. Briercliffe commented, “Without human intervention, the pavilion could decompose naturally. For example cross-laminated timber was used that is fully recyclable, the walls and tiles of the courtyard were made of compressed, non-baked stones from earth combined with bioplastic based on algae starch.”

After staging more than 1,000 events in six months across various stages, Floriade was set for its finale on Sunday evening, 9 October which began with a journey back through Floriade’s most memorable moments, such as the grand opening by Dutch King Willem Alexander through the many national days celebrated at the event.

Finally, the guests walked to the shores of the Weerwater lake to enjoy ‘Hive’ by Daphe Karstens, a light spectacle amongst the trees of Floriade and part of Almere’s Aluminous Light Art Festival, including a two-hour long trail with more than a million twinkly lights that will shine until 16 October.

Unfortunately, Floriade organisers decided not to fit the traditional flag handover into the programme, which normally sees BIE and AIPH officials presenting the flag to the next world horticultural Expo: Expo 2023 Doha Qatar. This AIPH-approved A1 horticultural expo will be held between 2 October 2023 and 28 March 2024, evolving around the Green Desert Better Environment theme.