Japan heralds the New Year with plants that burst with symbolism 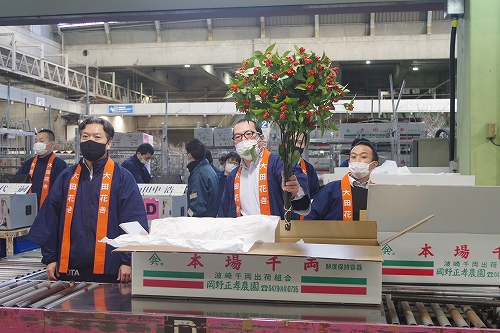 Sarcandra glabra is an evergreen shrub commonly found on wooded banks and streams in Southeast Asia, where it grows wild. The plant features tiny white flowers and berries. But tiny little things can mean a lot these days, especially in Japan where they herald the New Year on the first of January.

As a visitor, there is no better way to learn more about Japan’s New Year’s floral decorative traditions than to pay a visit to Japan’s major flower auction in mid-December. The Tokyo-based OTA Floriculture Auction sells and distributes around 363 million cut flower stems and four million potted plants yearly through its Dutch-style auction clocks. 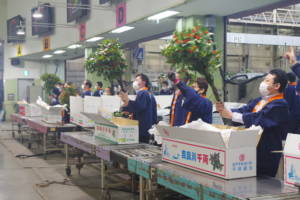 In terms of varieties, growers supply flowers and plants you can easily find at any other flower auction globally including top-selling lilies, roses and chrysanthemums. However, at this time of year,  buyers at OTA strongly bid on speciality species, mainly unknown to the Western world and bursting with East Asian symbolism.

OTA’s manager Ryoji Kato explains that in the run-up to the New Year, there is a good demand for Sarcandra glabra. “The berry-laden branches are a popular New Year ornament in Japan. In our language, Sarcandra glabra is known as Senryō (千両), which litterally translates as a thousand of ryō – an old currency from the Edo period (1603-1874) with 1,000 ryō equivalent to approximately  €310,000. Decorations using Senryō branches celebrate the New Year and wish luck and prosperity into the home.”

Apart from its ornamental value, and significance at Japanese tea ceremonies, the leaves of Sarcandra glabra host a range of medicinal purposes, including anti-oxidant, anti-stress and anti-inflammatory.

With regards to Senryō’s supply volumes and prices this year, Kato comments, “This year’s typhoons in summer and autumn didn’t wreak too much havoc on production areas, so supply volumes were up on previous years. However, good weather caused an oversupply of superior-grade Senryō.

“Average prices were lower while supplies increased by 12 per cent. Usually, Senryō bunches contain 20 branches of one metre each, with two bunches going into a moisture-resistant cardboard box. Quality grades depend on the quality of leaves and berries, overall plant health and well-branched.

“In the long run, we are rather pessimistic about Senryō production due to ageing flowers growers with no successors plus labour shortage in production areas. These problems apply to floriculture in Japan as a whole. Still, they are severe for a seasonal crop such as Senryō that requires many temporary workers including foreign workers, for whom it has becoming increasingly difficult to enter the country due to Covid-19 travel restrictions.” 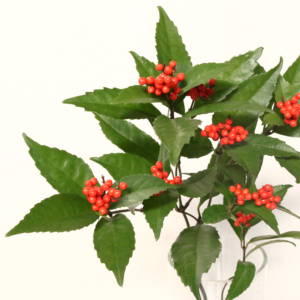 New Year’s floral decoration traditions in Japan include bamboo shoots, pine and plum branches overgrown with mosses. Bamboo means prosperity, and pines symbolise longevity and are known to ward off bad luck and spirits. Plum trees covered with mosses inspire the hope that the family will be granted a long life.”

The botanical trio, bamboo, pine and plum, are frequently incorporated into the kadomatsu, an arrangement placed in pairs at the front door of homes or garden entrances and burnt. The kadomatsu purpose is to welcome the spirits released once New Year celebrations are at the door.

OTA flower auction is a colourful division of the giant OTA market.  Stretching over 38 ha in the industrial outskirts of southwest Tokyo with Haneda Airport in the vicinity, OTA Market first opened its doors in 1989. It’s a prominent, industrial place where lorries are always busy transporting around its vast buildings. Every day, except Sundays, the market fills with the hustle and bustle of traders buying the freshest fruits, vegetables, fish, cut flowers and potted plants.

A good 17 per cent of the turnover is generated through the sales of imported cut flowers, sourced via authorised importing companies, including Classic, YMS and Otani.