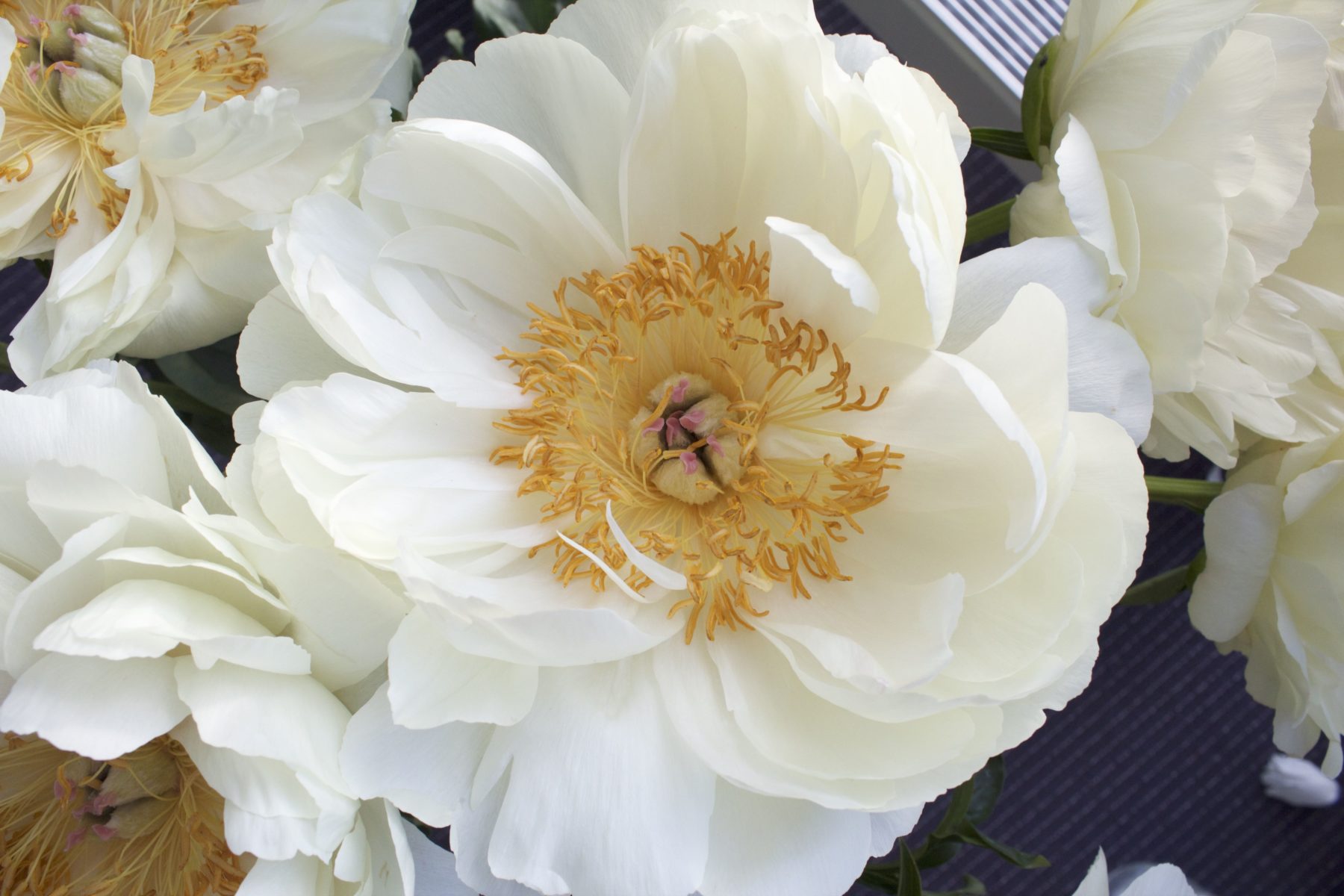 CNB’s lead peony specialist Ron Hoogeveen and network coordinator of summer flowers for glasshouse sector body Glastuinbouw Nederland Aad Vernooy treated their audience (a mix of seasoned veterans and newcomers in the field of peony cultivation) to an afternoon programme full of insight and tips for peony success.

In 2018, Western Europe experienced one of its hottest summers on record, with the full effects of the long-lasting drought only to be seen in the peony fields this spring.

Looking back on last year’s growing season, Hoogeveen says that the twists and turns seen in the European climate were exceptional by any standard. “Warm, sunny weather during April and May brought Dutch fields into peak production, and while the Netherlands got off to an early start, relatively cold spring weather delayed the harvest season in Southern Europe. The French and Italian peony peak was late and with the Netherlands coming onto the market there was an overlap and eventually an oversupply. An unlucky combination of heat and a shortage of flower pickers saw a portion of flowers wilting on the field by the end of the season. Moreover, some of the freshly harvested flowers were too warm when stored, affecting the quality of saleable flowers.

The Netherlands accounts for about two-thirds of the total peony supply grown in Europe. Total production area is approximately 750 ha. France has 80-90 ha down for cut flowers and there are smaller areas in the UK, Italy Portugal and Spain. Israel has approximately 40 ha, grown to target early spring demand in Europe. Beyond European borders, Hoogeveen sees significant expansion in production areas in China, the US, Canada, Norway and Russia, prompting him to ask his audience whether the industry is reaching its limits for growth.

In planting stock material CNB’s trade is booming with a growing demand from China, Russia, the United States and Canada. Jacques de Vroomen, the self-acclaimed largest wholesaler of bare rooted peonies in the world, has subsidiaries in Niagara Falls and Gurnee (Illinois). He is witnessing that conventional potted peony growers in the US, who in the past   focused only on large container production and sales to big box stores, are now growing peonies as a cut flower as well with Whole Foods Market among their first customer.

De Vroomen says the US is an excellent place to do business but the market has specific demands. Potted plant cultivation in large containers means punctuality in delivery of bare rooted plants that is no later than the first week of October. Winter can come unexpectedly and early in the US and growers prefer to have their cuttings (3-5 noses of shoots and more recently even 6-8 noses of shoots) rooted before temperatures drop well below zero. In the US, Vroomen says, the market is dominated by double-flowered pink lactiflora variety ‘Sarah Bernardt’, introduced in 1895. Double white ‘Duchesse de Nemours’ and the soft pink double-flowered Mrs Franklin D. Roosevelt’ also rank high on America’s list of top favourite peonies. The traditional retail florists continue to have a soft spot for pink and white varieties though Coral varieties in soft hues of orange and peach are also gaining popularity.

Peonies around the auction clock

Royal FloraHolland’s auctioneer Mario Heemskerk commented that last year a set of fairly unique circumstances led to peonies arriving for the flower auction five days a week, all year round. “Every single day auctioned off peonies. In January, peony sales started with flowers from the southern hemisphere followed by Israeli peonies (which have seen a dramatic decline in production over the past few years), then came flowers from Italy, France and finally the Netherlands completing the circle. “Due to unusually high temperatures quite a few Dutch peonies were too warm when stored resulting in complaints about the ripeness of the flowers. Flowers were stored until October when the first freshly picked peonies from Chile arrived. Product volumes were more or less the same as 2017,” Heemskerk added.

CNB’s Yorick van Leeuwen released the first results of the cooperative’s experimental project on ULO storage of peony cut flowers. ULO is a system that inhibits and delays the physiological processes in fruits and bulbs. Air contains about 21% oxygen and by significantly reducing the oxygen level the respiration of the stored product can be slowed to a low level. CNB’s investments in extensive ULO storage facilities have extended the marketability of the so-called ice tulips – tulip bulbs which are stored and used for forcing in autumn a year after they were harvested.

By CNB’s industrial standards, the ULO storage for peonies project is small scale: participants included two growers each using six airtight ULO storage boxes. Each box has six semi-permeable membranes to regulate gas exchange and stop oxygen from coming in. Oxygen levels were reduced to around 5% and the boxes were kept in CNB’s standard cold stores at a low temperature. Flowers were introduced into the boxes on May 24, 2018 and June 4, 2018 with approximately 700 stems filling 3/4 of the space. Tested varieties included ‘Sarah Bernhardt’, ‘Kansas’, ‘Gardenia’, ‘Alexander Fleming’, ‘Bridal Shower’, ‘Top Brass’, ‘Dinner Plate’ and ‘Mr Jules Elie all of which were ULO-stored for 14 weeks. For comparison, the same varieties were also stored in conventional coolers.

Based on the first trial results, the following encouraging conclusions can be made:

ULO-based protocols can significantly extend the shelf life of peonies up to 14 weeks. Without exception all batches kept under ULO featured healthier looking leaves than those stored in conventional coolers which looked droopy and fatigued with leaves curling and dried out. However, there are other factors to consider for ULO-boxed peonies. For example, ULO requires safety measures to be taken as there can be danger of suffocation. Moreover, it is clear that, despite the absence of hard data, the success of ULO-stored peonies highly depends on whether field heat has been removed from the flowers before cooling. To prevent Botrytis infections on flowers, storage of moist flowers must be avoided as even under ULO conditions fungus may continue to thrive. Pre- and post-treatment of the stems using flower food (Chrysal/Florissant) is also recommended.

Regarding costs and benefits, Van Leeuwen stressed that the maths still need to be done. However, he believes that a profitable business model for ULO-stored peonies is possible, though profits will depend on pricing and quality at the time of marketing the flowers.

Spray drift, defined as the movement of a crop protection product through the air to a location other than the site intended, has come under scrutiny in the past year with new Dutch  legislation currently under way. Adriaan van de Veen of Agricult explained the benefits of the new LVS NK80LT nozzle which his company sells to farmers and nursery stock growers.

Six years ago, Van de Veen began promoting this high precision low drift nozzle to peony growers. He explained that spray drift is less likely to occur when applying pesticides with droplets of 100 microns and that are larger in size. Independent research conducted at Belgium’s government institute for agricultural fisheries research (ILVO) revealed that the company’s low-drift nozzle produces significantly less drift-prone droplets than the standard flat-fan nozzle. Highly uniform droplets are distributed to the ground in the same effect of a fertiliser-spreader with the majority of droplets belonging to the ‘coarse’ (218-349 micron) category. The nozzle produces very few droplets larger than 400 micron, reducing both water use and the risk of water rolling off the leaves.

Speaking of water, with the never-ending summer of 2018 fresh in everyone’s minds, the presentation of Koos in ‘t Hout, sales representative of Tijm Mechanisatie, on drip irrigation in peonies piqued a lot of interest. Heatwaves across the Netherlands led to hosepipe bans which put pressure on peony farmers whose crops were affected by the dry conditions.

Drip irrigation has the potential to save water and nutrients in many crops. Back in 2007, Tijm Mechanisatie learned the ropes in blue berry cultivation followed six year later by an extensive drip irrigation project in seed potatoes in Gambia and Uganda. In ‘t Hout explained how a €700/ha investment in drip irrigation led to 1000-1500 kg/ha higher yields. In Africa, Tijm Mechanisatie uses the relatively cheap drip tape but advised present peony growers to search in a thickness range which is higher as this type of tape is more suited for annual crops and sensitive to damage from small rodents which may gnaw on the tape and cause leaks. According to In ‘t Hout one of the best options in peonies would be Toro’s Aqua-Traxx drip line whose seamless construction provides maximum strength. Moreover, Aqua-Traxx stands out for its superior precision, uniformity, durability and plugging resistance. T Hout advises to inject 2 lines per row, below the planting bed about 4 to 5 cms deep. Only Aqua Traxx has the two blue stripes — they are a signature of quality and ensure proper installation. When the blue stripes are facing up you know the tape is installed in the proper direction. Drip irrigation operates at low pressure and fertilisers can be applied to the roots along with the water eliminating the need for application by tractor.

Last summer, Delphy, the Dutch service provider for cultivators around the world (formerly known as DLV) put research into practice with a knowledge sharing initiative for peony growers.

A demonstration for farmers was run on peony farm Mts Bergsma in Boyl, Netherlands, where drip irrigation was installed under a two-year peony crop. Peonies are an increasingly popular crop to grow with farmers in the Boyl area which once belonged to the so-called Veenkolonien, turbaries where peat cutters worked hard and lived a harsh life.

Peony farmer Jacques Bergsma is delighted with the first results of drip-irrigated peonies under rather challenging circumstances as Holland endured an extremely long period of drought last summer.

Bergsma explains that setting up the drip irrigation system was rather easy and that he carried out the task with the help of a somewhat retooled planting machine. “Everything was working appropriately and the system has made work a lot easier instead. Juggling around with reels and sprinklers was no longer necessary. RMA sensors told me when the plants needed water. There isn’t a water meter but I think that water usage was only half compared to using the traditional reel or sprinkler,” said Bergsma.

Bergsma is now looking for possibilities to fertilise his crop using the drip irrigation system, which can be of use especially at the start of the growing season before cuttings have developed any roots. He says he will expand the production area under drip irrigation.

A demonstration for farmers was run on peony farm Mts Bergsma in Boyl, Netherlands, where drip irrigation was installed under a two-year peony crop.

Delphy derives from the classic antiquity Delphi, where people met with questions about crops, fertility and harvest.