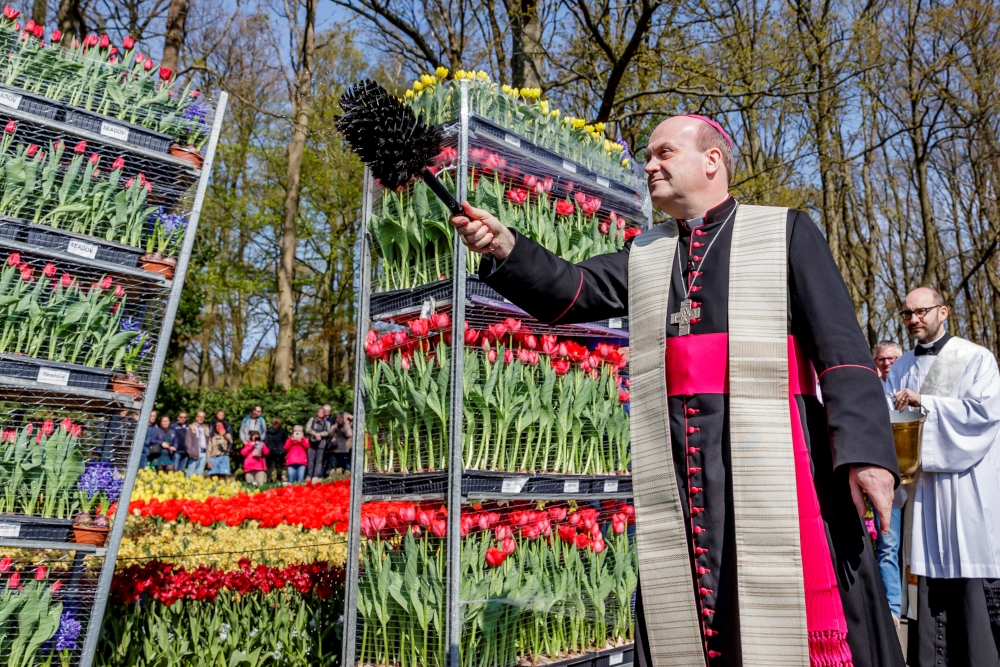 LISSE, the Netherlands: A truck filled to the brim with fresh cut flowers, potted bulbs, trees and shrubs is on its way to Rome. Holland Land of Flowers will once again contribute to the Easter Celebrations in Saint Peter’s Square. The Right Reverend Van den Hende, Bishop of Rotterdam, came to the world’s most famous spring gardens Keukenhof to bless the flowers before departure. Visitors from many nationalities were there to wave the floral consignment off.

Today,  Maundy Thursday,  floral designer Paul Deckers and his team of 25 florists will start making preparations for their flower arrangements on the grounds of Vatican City. The event marks the 34th year the Dutch flower industry presents Vatican City with plants and flowers to adorn Saint Peter’s Square.

Yellow and white, the papal colours, will be the predominant colours chosen for the floral installations which will be in place for the traditional Easter Mass on Sunday, 21st April in St. Peter’s Square. Tens of thousands of worshippers will be in the square and millions  across the world will witness the celebration of mass on their TV screens, culminating in the traditional blessing to the city (Urbi) and the world (Orbi) given by Pope Francis.

In decorating Saint Peter’s Square, Paul Deckers follows in the footsteps of Nic van der Voort who in the 1980s ‘opened the doors’ in the Vatican. Deckers recalls, “In 1985 Pope John Paul II embarked on a visit to the Netherlands. On that occasion, the Pope celebrated mass in Utrecht and Nic van der Voort, a florist from the city of Leiden, made the floral arrangements. The Pope and his entourage were so delighted with the Dutch flowers that Van der Voort and his colleagues were asked to come over to Rome to provide an appropriate floral backdrop for the beatification ceremony of Dutch priest Titus Brandsma that same year. This is how the idea was born to deck out St Peter’s Square with Dutch plants and flowers at Easter.”

Huge flower arrangements will decorate the immediate vicinity of the altar. “For me as chief flower arranger it is a challenge every year to decorate the large St. Peter’s Square with Dutch flowers and plants: a metamorphosis into a floral painting,” says Deckers. “When arranging the flowers for the decoration displays one has to take into account the different flowers and their symbolism.”