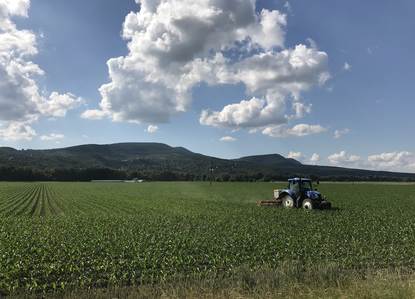 DEN HAAG, The Netherlands: A newly published report by Hungary’s GKI Economic Research Company presented the most up to date information about the country’s economy. The economy grew by 4.4% in the last quarter of 2017 and first quarter of 2018. There is a high fluctuation in agricultural production and a shortage of skilled labour is one of the sector’s biggest challenges (scroll down for specific details about agriculture).

The 4.4 per cent growth in Hungary’s economy is a rate only registered once in the past decade. Such a growth rate also ranks as the fifth highest in the Central and Eastern European region (CEE). However, the report suggests that various geopolitical tensions indirectly affect the country’s economy. These include the conflicts around Iran, the Turkish situation, rising oil prices and the devaluation of the currencies of emerging countries.

The external tension that affects Hungary most is the uncertainty within the European Union and the fluctuating sense of unity amongst its member states. The deteriorating state of US-EU relations and the implementation of Brexit add to this factor.

Winning a third term in a row, the Fidesz-KDNP party has again established a two-third majority in Parliament. According to GKI this entails the possibility of a stronger establishment of the one-centred Hungarian political model and a continuation of confrontational policy with the European Union. This is suggested to be a major barrier to sustaining future growth in the country.

In terms of the national economy, household consumption is very high, with expansion for the sixth consecutive year. The investment flow has been very speedy in 2017, where it increased by 17 per cent. The projections for 2018 currently stand at an increase of at least 9 per cent. In 2018 investment rates are predicted to rise to 22.5 per cent at pre-crisis levels. The report suggests that this increase will be due to an increase in development projects in the public sector, while business investments are more restrained.

The new government proposal includes a 1.8 per cent deficit for next year, but GKI projects a real deficit of 2.2 per cent. While the trade surplus decreased in ’16 and ’17, it remains very high in ’18.

GKI reports that while agricultural is a politically important sector, it is also one with a very high fluctuation rate (at least 10 per cent). This is also noted by a 2018 report on Economic Trends in Eastern Europe by Kopint-Tárki Economis Research Ltd. The study shows that volatility is one of the biggest challenges of the agricultural sector. In various years the sector in general was a negative contributor to GDP growth.

Another major challenge faced by agricultural producers is the high level of labour shortage. This gap exists in the supply of both skilled and unskilled workers. One of the reasons for this gap is foreign employment, mainly in Western Europe. The higher wages in the automotive assembly industries is also a strong pulling factor for workers originally active in agriculture.

A recent announcement by the Minister of Agriculture showed that the government is aware of this issue and is working on solutions to tackling it. One such planned initiative is lowering the thresholds for admittance to vocational schools, as well as improving the curriculum taught in agricultural colleges.

The Minister also introduced thematic town hall meetings, where representatives of distinct industries – such as the pig sector, horticulture, etc. – can convey their biggest concerns and work on possible solutions.

While the sector faces challenges, it is an important part of not only the Hungarian, but the European economy. The latest overview by the Central Statistical Bureau of Hungary suggests that the country accounted for 5.5 per cent of the European Union’s industrial crop produce. A successful restructuring of the sector could mean great opportunities for Dutch technology and knowledge.