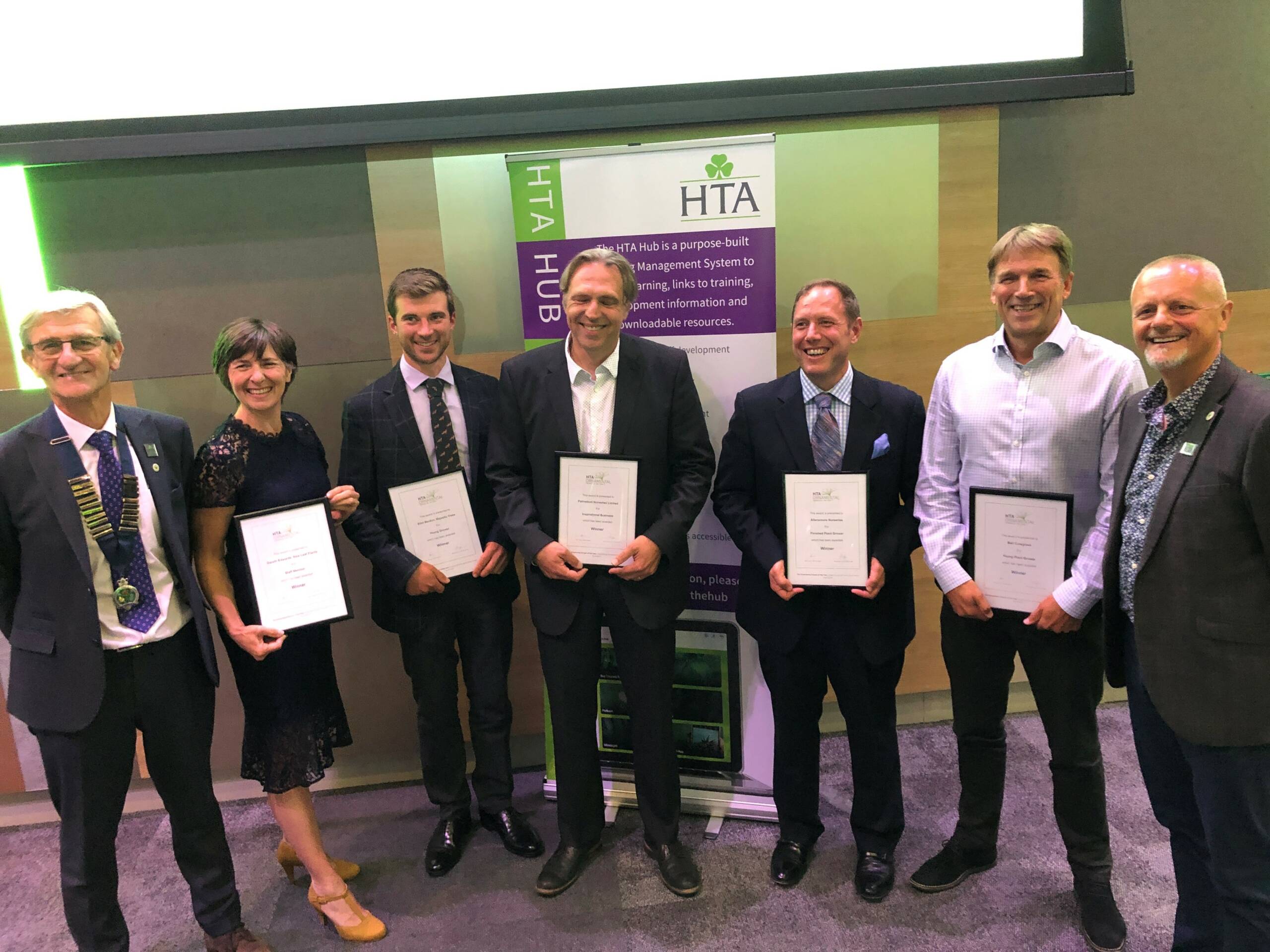 The Horticultural Trades Association (HTA) has announced the winners of its inaugural Ornamental Grower of the Year Awards. Pictured at the Awards are Alan Down, President of the HTA; A representative of New Leaf Plants; Eliot Bardon, Aftercare, Apprenticeship and Training Manager at Majestic Trees; Martin Brijs, Production Manager at Palmstead Nurseries; Mark Taylor, Managing Director of Allensmore Nurseries; Sandy Shepherd, Managing Director of Ball Colegrave; and Martin Simmons, Director of Membership at HTA.

DIDCOT, UK: The UK’s Horticultural Trades Association (HTA) has announced the winners of its inaugural Ornamental Grower of the Year Awards. The Awards were announced at the HTA’s annual conference, Horticulture, The Conference, which took place at the International Convention Centre in Birmingham on Wednesday 14 September.

The new Awards programme celebrates the UK’s best ornamental growers and recognises best practise in sustainable ornamental production. As well as proving their track records in high quality production, nominees were tasked with demonstrating their commitment to the environment and how they are working towards specific targets such as Co2 reduction, peat removal or water resilience.

Speaking at the Awards, James Barnes, Chairman of the HTA said: “It is with great pleasure that we present the winners of the inaugural Ornamental Grower of the Year Awards. The commitment to sustainable ornamental production shown by all nominees is truly inspirational, and the winners and highly commended entries demonstrated outstanding innovation. We’re delighted to recognise the excellent work being done by horticulture businesses, which is instrumental in helping the UK to meet its environmental goals.”

The full list of award winners and highly commended entrants is as follows:

The Awards were launched in June this year at the HTA’s National Plant Show and nominations closed in July. Nominations were submitted by retailers, suppliers and individuals working in the industry.

The panel of judges for the Awards consisted of Alan Down, newly-elected President of the HTA; Tim Briercliffe, Secretary General of the International Association of Horticultural Producers (AIPH); Martin Cowell, Co-Director of Cowell’s Garden Centre; and Andrew Wilson, Technical Manager at ICL Specialty Fertilizers.

The winners of the Awards were presented with a certificate and trophy on the night and have been automatically entered into the AIPH International Grower of the Year Awards.

Horticulture, The Conference took place at the International Convention Centre in Birmingham on Wednesday 14 September and was attended by 140 industry professionals from all over the UK. Discussions focused on envisioning what the industry could look like in 2030, with topics including the retail revolution, automation, artificial intelligence and the metaverse.

Usually annual, this was the first time the conference had taken place since 2019, having been postponed the last two years due to the pandemic. During his opening address, James Barnes spoke about the challenges facing the horticulture sector, commenting: “Notwithstanding the issues of the now, it’s imperative that we scan further ahead – accelerated change will make the horizon become our foreground pretty quickly. Having the ability to sense change will allow us to seek out opportunities; the issues we’re facing into right now might be great, but the opportunities might be even greater.”