Home > PeopleWorld > Horticulture is their life

Horticulture is their life 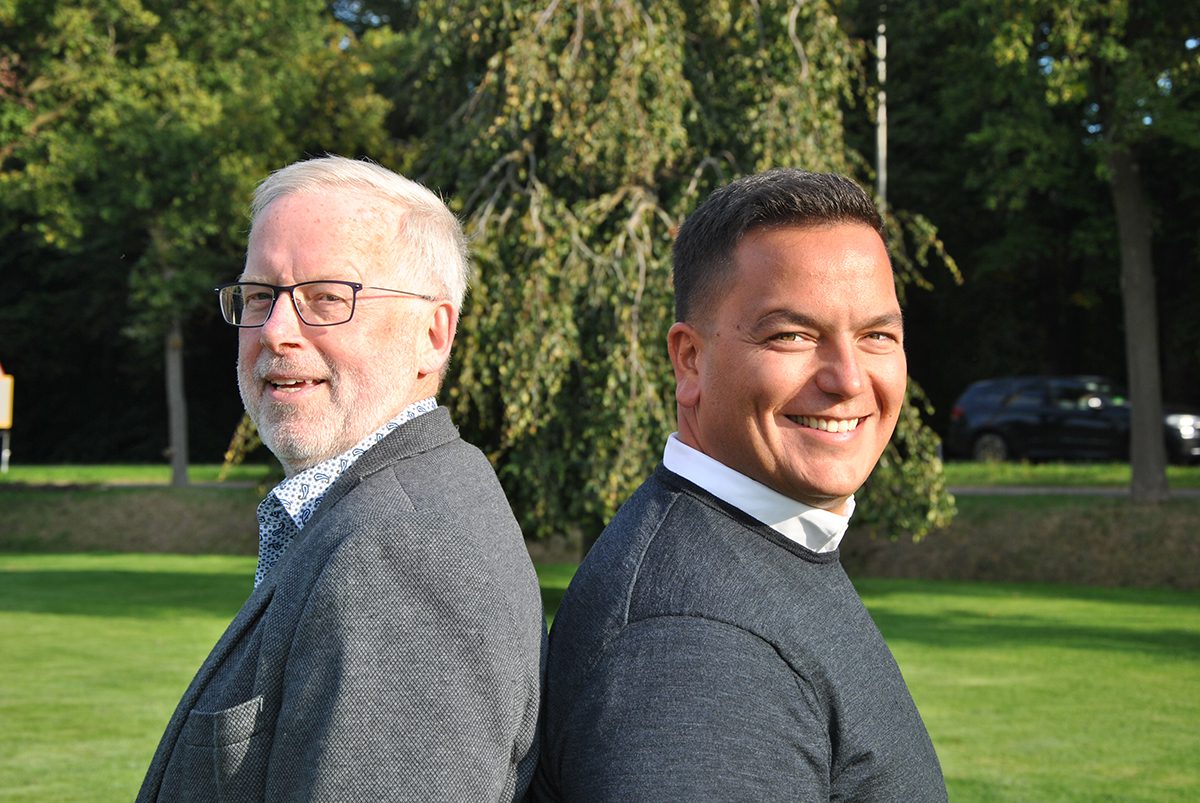 Leonardo Capitanio is the new President of the International Association of Horticultural Producers (AIPH). Taking a ‘huge’ step back from this role is Bernard Oosterom. Leonardo gives FCI (October 2022 magazine), his future vision, and Bernard reflects on his time in this position.

The International Association of Horticultural Producers – AIPH’s mission, as the world champion for the power of plants, is to support and promote the work of its members – the grower organisations around the world who together form the proud AIPH community.

AIPH Members are associations that represent the interests of growers in their respective countries. AIPH has been driving demand for ornamentals, supporting growers, and preparing them for the future.

Members took part in governance elections during its General Meeting held during AIPH’s 74th Annual Congress, in Almere, Netherlands, on 27 September.
The Members unanimously voted for Leonardo Capitanio, an Italian horticulture representative, as the next President of AIPH.

LEONARDO CAPITANIO IS CLEAR ABOUT THE FUTURE

As an ornamental plant grower in Monopoli, Italy, with a past role as President of the Italian Nurserystock Exporters Association (ANVE), and more recently working as a Vice-President at AIPH, Leonardo Capitanio, has been involved in international cooperation across the horticultural industry for many years.
In his acceptance speech, he said: “I am honoured. To be elected in Holland has particular value because this country has collaborated the most in developing modern horticulture worldwide.

“It is the country where I had my first international experience; in 2007, when I was 18, I came to work in a Dutch nursery.”
He grew up in a nursery close to his family home. He says his earliest memory as an eight-year-old was sowing plants. Now 25 years later, he is engaged in representing our industry worldwide.

Capitanio continues, “I have worked hard for the vision of our industry. Now I aim to help the industry pass through this challenging season gripped by Covid 19 pandemic and the crazy energy costs.” 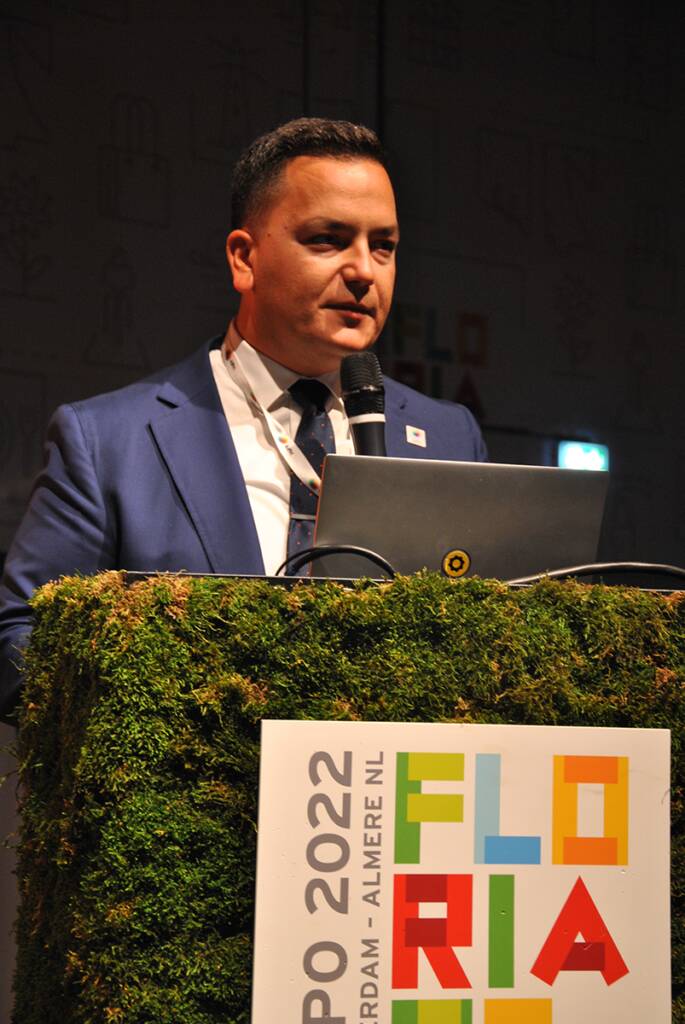 Capitanio dreams of a more developed horticultural industry supported by a strong technology solution that can help the entire supply chain. He asserted: “I will never forget the importance of the little family companies that have marked the story of global horticulture, from Asia to America, through Africa, Oceania and Europe.”

He says Horticulture is a significant part of the chain involved in controlling global warming. “I am proud to realise that, thanks to the plants, we are the only industry whose products create more oxygen than we consume. It is why as AIPH, we are responsible for collaborating with all stakeholders now and in the future.”

Capitanio says he always lives with a mission to improve himself and his surroundings, adding: “Climate change makes our future uncertain, but I don’t want to be afraid of tomorrow. I prefer to do whatever it takes for a positive future. I will do it with all my effort, professionally, but always with a big smile.”

Praising the outgoing President, Bernard Oosterom, Capitanio said: “I remember meeting Bernard during the AIPH Annual Congress in 2017 in Taichung, Chinese Taipei. We soon established a solid and professional relationship founded on our passion for the horticultural industry.

“In Bernard, I found a mentor who inspired me in the role of Italian Exporters Nursery Association’s Chairman. I have learnt a lot from him: his professional approach and tenacity in managing the main international dossiers and the private and public relationships. But mostly, I appreciate the sympathy and the pleasant environment he’s able to create around him. Finally, I thank him for all the motivation he gave me for my candidacy for the AIPH Presidency.”

In a curious twist, Bernard Oosterom was elected President of AIPH in 2015 during the 67th Annual Congress held in Stresa, Italy.

Oosterom, from The Netherlands, has been involved in international cooperation across the horticultural industry for many years. From his beginnings as a potted plant grower, he has been a board member of several organisations within the ornamental sector,

He said: “When I look back on my period at AIPH, it makes me happy that I was able to contribute to the awareness among millions of people about the power of nature in human lives.

“Promoting this through Expos and the Green City initiative has become increasingly relevant for residents of cities and administrators of governments who also recognise nature as the answer to climate change.”

He notes, “During my presidency, the AIPH organisation has grown into a professional and passionate team led by Secretary General Tim Briercliffe.

“It has been great to experience being a part of this team. Together we have been able to translate our strong message on the power of plants at an international level and push this into concrete activities for the ornamental industry. Through closer cooperation and understanding and finding each other to learn from each other, we are putting ornamental horticultural producers in a stronger position. And that is based on more and more scientific evidence.”

AIPH not only connects producer organisations, but it has been establishing the right relationships with various international organisations to help contribute to a better world for people and nature.

Oosterom says, “Sustainability in so many areas has come to the fore in public life, but it still requires the decisiveness of many decision-makers to bring it to full maturity. AIPH’s work addressing this topic is very positive, and the AIPH Sustainability Strategy is only the start of further implementation and improvement in practice.

“I would also like to emphasise that the growers of all these beautiful and valuable products are responsible for producing more sustainably and certifying the production processes from breeding into consumer-ready products. Only in this way can the sector continue to contribute long-term.”

He thinks growers worldwide have to organise themselves powerfully. As champions for the power of plants, AIPH is a fundamental link to making this possible. 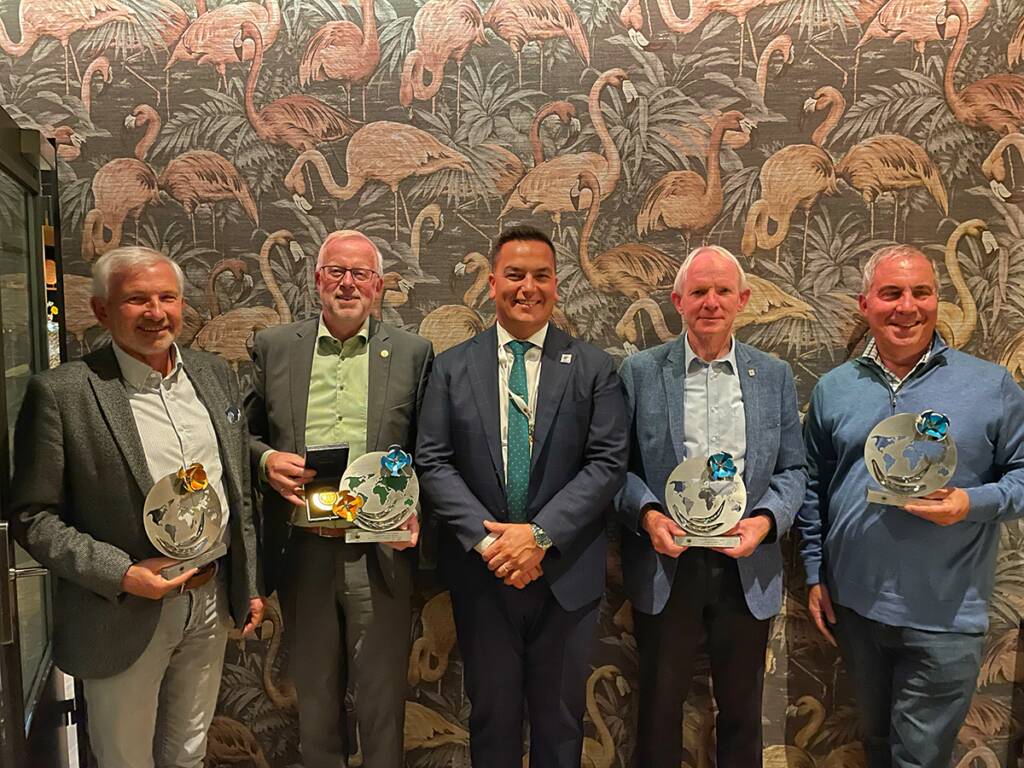 AIPH Presidents, past and present.

In citing some highlights of his time as AIPH president, he says, “The conferences, where I have seen many international experts address important themes such as green city, plant variety rights, sustainability, the vital role plants have in improving people’s and cities’ health and many other industry-related topics, will stay top of my mind.”

He also mentions networking and bringing together those involved in the flower auction markets to find common topics to improve the supply chain.
Setting up and developing a sparring partner group around the theme of plant breeders’ rights has been another highlight. This area is legislatively complex but a crucial topic to support growers. He says, “Our actions promote international discussions, and the knowledge is used for national situations.

“I am also very grateful for the various visits and intensive conversations with Expo organisers. Not always easy, but I have experienced that every host city wants to do its utmost to offer millions of visitors an unforgettable visit and to learn how vital living greenery is in the immediate living environment of everyone.”

Oosterom also remembers how he was part of the publishing and development of FloraCulture International magazine. He says, “It is an essential communication tool for the entire ornamental horticultural industry. Informing all stakeholders through interviews and articles on topics that benefit our sector.”

Oosterom takes great pride in having helped develop various industry awards. International Grower of the Year (IGOTY) and the inaugural World Green City Awards. These accolades celebrate growers and cities on an international stage to share the best of the best with the world.

He concludes, “I feel really grateful that I was able to contribute to these moments.AIPH is close to the primary producers and, at the same time, has the position to play an essential role on a global level. I wish everyone involved a bright green future.

“In the realisation that nature is a gift to all of us and that we should appreciate and preserve it. I take a step back; I take a huge step back, but with confidence and the belief that the AIPH organisation will grow and flourish under Leonardo Capitanio’s leadership.” 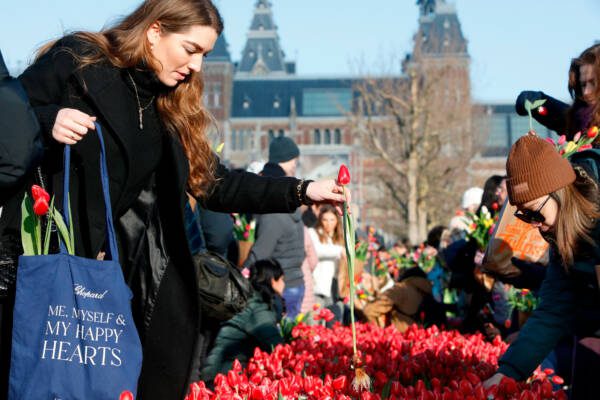