Helix Australia adds the finishing touches with its popular waxflower 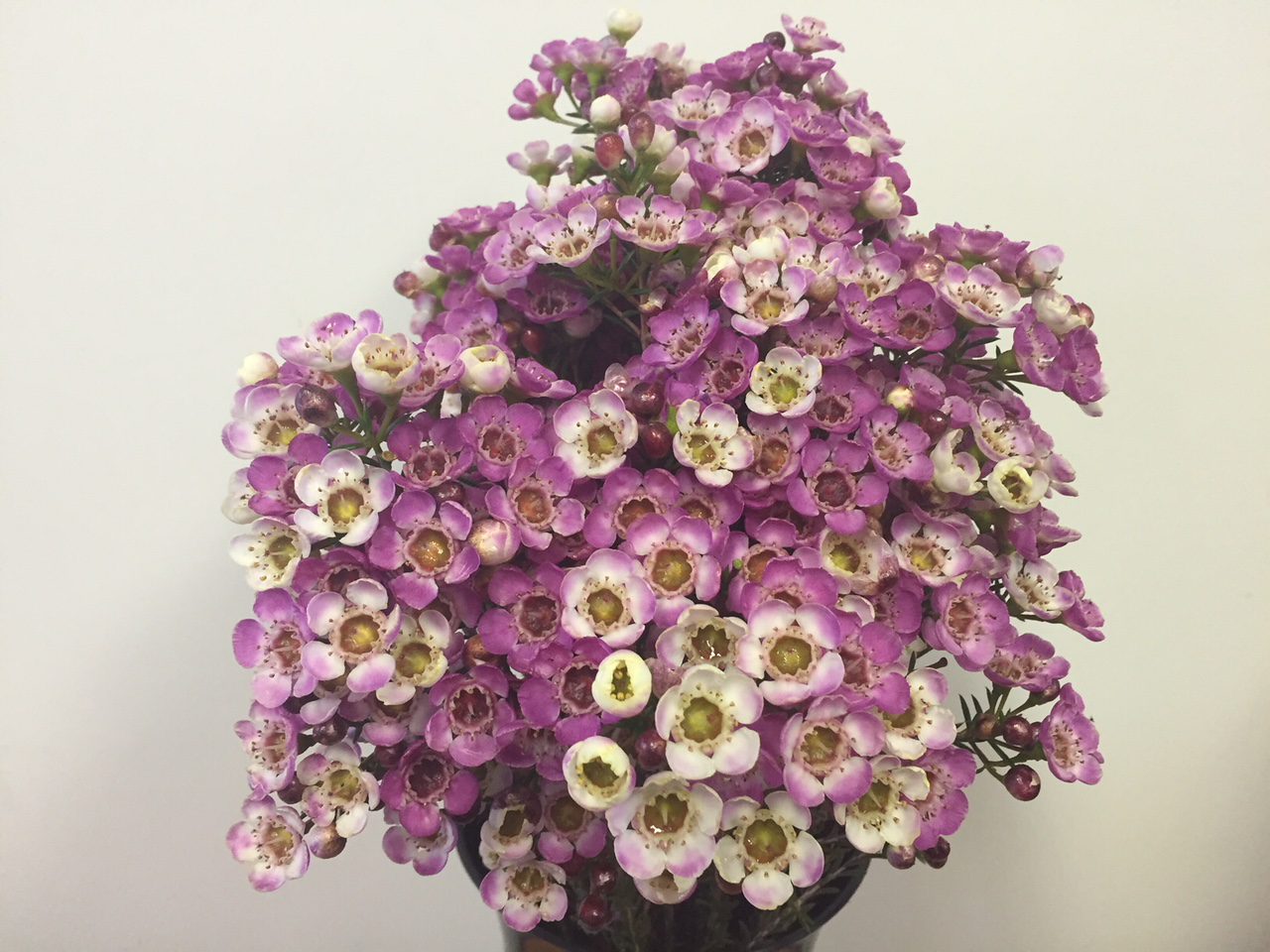 Highly acclaimed within the global cut flower industry, Helix Australia’s exciting range of new waxflower varieties add beauty and texture to any bouquet and have evolved into must-haves for every floral wholesaler, bouquet manufacturer, florist, and floral designer. The company’s breeding breakthroughs perform exceptionally well as a patio plant and landscape feature.

Chamelaucium (waxflower) is a staple filler flower on the global cut flower market. The genus of this shrub belongs to the myrtle family (Myrtaceae) and has flowers reminiscent of those seen in Leptospermum. Waxflower is native to Australia and grows in its natural habitat near its western seashore. Waxflower is usually commercially available year-round, thanks to the extended flowering seasons of Australia, South Africa, Israel, and the USA.

Since its inception, the name Helix Australia has been synonymous with waxflowers.

Back then, Parsons and his business partner Craig Musson, owner, and director of Wafex, decided the only way to go forward was to invest in premium waxflower breeding to create varieties capable of commanding premium pricing. Together the pair established the breeding company Helix Australia by acquiring the breeding business and catalogue of Brian Jack, Western Flora, marking the beginning of its waxflower breeding, licensing, and marketing journey in 2008.

Parsons says, “Historically, the Western Australian Department of Agriculture was the leader in waxflower breeding and post-harvest research. This department released many great varieties in the 1990s and 2000s, but it was before global PBR was understood and policed.

As a result, many great hybrids were leaked free of charge globally. Government investment in the Australian flower industry started to be cut in the 2000s as Australia’s export market share started to reduce.”

In 2010, Wafex leased a farm at Regans Ford, north of Perth in Western Australia, bought another at Longford in Gippsland, Victoria — both about 30 hectares — and got to work. These farms — the first run by the pair — provide room to trial varieties, house mother stock and produce additional products.

Parsons says, “Waxflower breeding is an inexact science, but our broad objectives were to create a unique range of waxflower hybrids covering bloom size, colours, and early/late flowering seasons. We now have more than 30 patented cultivars covering cut flower, pot plant and edible channels with many more exciting hybrids in the pipeline.”

He makes it sound like it all went to plan, but this breeding criterion is evolving as the market opportunities grow.

Parsons explains that the company’s early selections focused on servicing the cut flower channel. Thus, stem length and yield were selection criteria. “We have now evolved selection criteria to include a search for more naturally compact hybrids for the nursery and landscape channel and a stronger focus on flowering time, tapping into premium prices for early and late season supply. Our work in the edibles and essential oils channels sees us keeping a close eye on the taste palate and oil content of new hybrids from our breeding and selection programmes.” 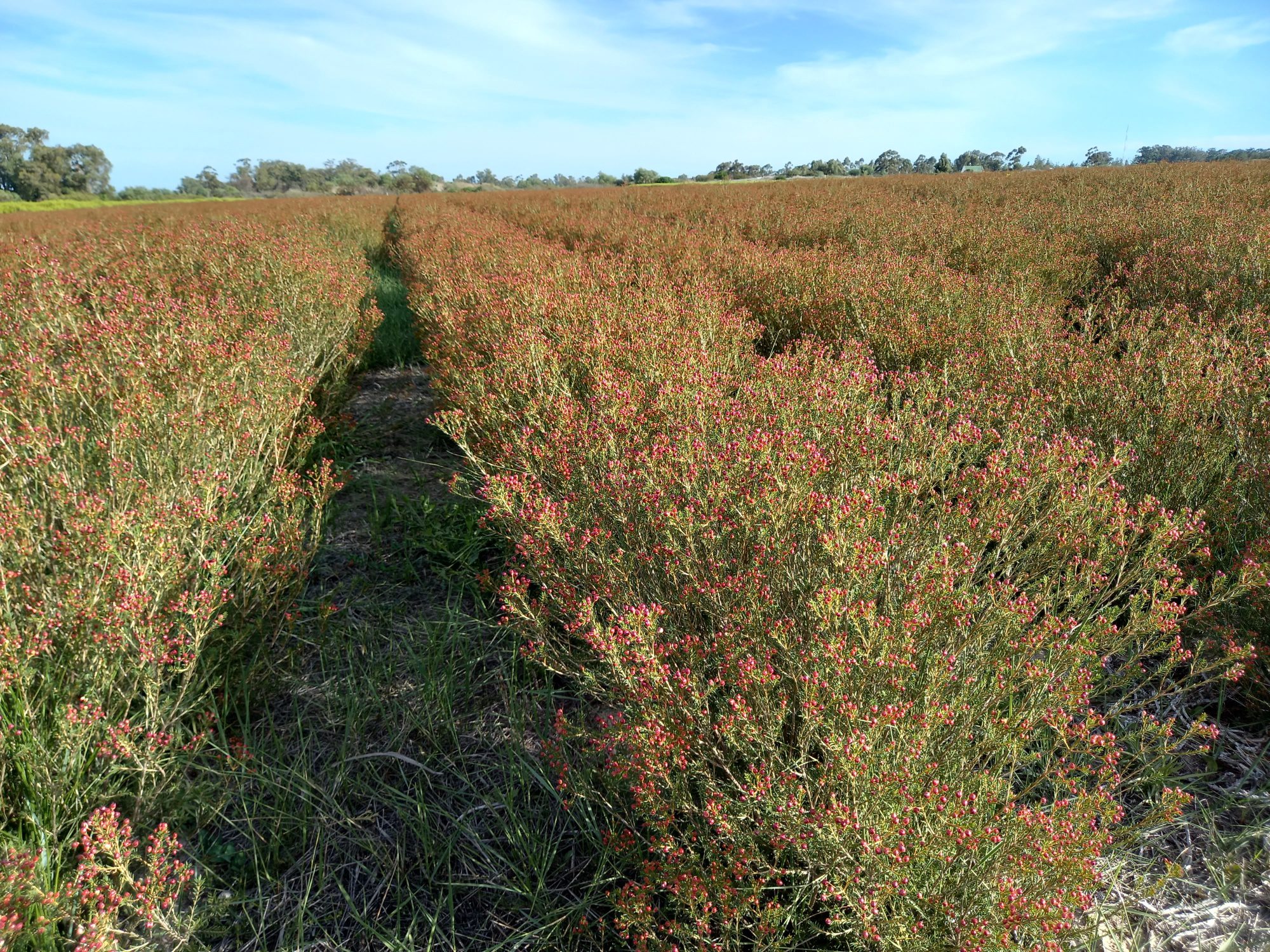 The consumer demands new and exciting cut flower and pot plant varieties. The reality of Helix Australia’s achievements in breeding cannot be overstated in this respect. The waxflower is a woody shrub. It takes years to flower, so a breeding programme must run for many years before commercially successful new cultivars result.

Helix Australia invests in exciting breeding programmes with Kings Park and Botanic Garden (KPBG), Perth, Western Australia. Parsons explains, “Top notch research by KPBG’s Digby Growns and his team resulted in hybrids through somatic fusion. However, these hybrids were not vigorous enough for the commercial market. Restoration of fertility in wide hybrids was still important to the programme so KPBG embarked on the more traditional route of doubling chromosomes through using colchicine. This process enables the production of larger blooms through producing sterile triploids.”

Parsons says: “Our relationship with KPBG is over 12 years old. The benefits have included access to a suite of fantastic waxflower hybrids. By partnering with KPBG we are aligned with a commercially focused research institution keen to deliver tremendous value to the global cut flower community.”

Helix and KPBG’s most significant breeding breakthroughs, in terms of growers, wholesalers, and end-consumer values are the double pink Dancing Queen, the world’s first two-toned ‘MySweet 16’ (red and white), the early, virgin white ‘Morning Delight’, ‘Pirouette Mim’ and ‘Giselle’ (with an inner curl of petals), ‘Dawn Pearl’ and the edible ‘Jambinu Zest’.

Parson expands on these achievements and his favourites. “Our breeding breakthroughs for bloom size include a combination of more prominent blooms and large buds, which has enabled our waxflower to capture the eye and imagination of floral designers. Our megapetalum series, including ‘Moonlight Delight’, ‘Sarah’s Delight’ and ‘Ruby’s Delight’, create such a striking presence in floral design that they are becoming known as ‘feature-filler’ flowers.
“In terms of early flowering varieties, ‘Morning Delight’ and ‘Dawn Pearl’ have added up to four weeks at the front end of the season, where growers can typically obtain optimal prices.”

Parsons thinks there is still room for improvement. He elaborates, “In time, older and less-performing specimens will drop out of production and be replaced by improved waxflower hybrids.The majority of Israeli waxflower varieties date back over 20 years, and we are confident growers will replace with newer varieties once proven in terms of yield, colour and desirable flowering season.”

Regarding breeding, the pertinent question is how to decide whether to focus on the cut flower, potted plant, or landscape market? Parsons: “When developing breeding protocols, we are open and receptive to breeding outcomes that could be applied to both the cut flower and potted market. As more naturally compact waxflower hybrids emerge from our breeding programme, we foresee expanded growth in the pot plant market with growers able to eliminate the cost and labour expense of using pruning and growth regulators.”

Helix’s success in the global flower industry is due to the worldwide network of growers and exporters in (Australia), South Africa, Israel and California, ideal locations for growing waxflowers.

Parsons praises the role of Helix’s customers worldwide. “They have been prepared to trial new hybrids in their climatic zone and openly share production details and flowering time. This open exchange of information has enabled us to release specific markets in certain growing regions. For example, new plantings of waxflower ‘Niek’s Pride’ and ‘Grace’ have been significant in South Africa, whereas these hybrids did not match the market requirements of our Australian growers.”

Marketing is important to create and maintain demand to engage customers. Helix Australia has hired flower arranger and blogger John Elstgeest from Flower Circus to create regular content for the company’s social media platforms. Parsons: “With a forecast lift in production volumes from South Africa and Israel in the coming years, we have started to invest in an expanded media schedule to lift the profile and awareness of our waxflower varieties. Informed buyers typically increase their purchase volumes, so our social media content will use a combination of design tips and variety profiles to keep the flower trade up to date on our crop status this season. In November, we will also have a strong presence at the forthcoming ITFT Trade show in the Netherlands.”

But it doesn’t end there, Parsons says. There are challenges. Streamlining the movement of Helix Australia’s trial genetic material is a challenging process across various countries. Likewise, the time involved in the important role of Plant Breeder’s Rights registration requires both focus and investment.
Parsons says: “We believe PBR protection is a crucial part of our business strategy. Yes, the cost and process are challenging, but given the ten-year window to breed a new waxflower variety then, we need to protect our variety via the adoption of PBR in key production and consumption markets.”

The future for waxflower looks very promising. Parsons: “Our colour pallete of hybrids and extended flowering seasons means the flower trade can build long-term design programmes using waxflower. Personally, I want Helix Australia waxflower hybrids to constitute over 50 per cent of global production. I would like our new hybrids to have inbuilt yield and reduced disease resistance, enabling reduced use of synthetic inputs that could impact the environment. I want our new hybrids to have significantly increased vase life so they could be transported via sea, reducing costs and carbon inputs from freight.”

Israel, South Africa, the USA (California), Australia, and, to a minor extent, Peru are the epicentres of waxflower production. Californian-grown waxflower is solely sold on the US domestic market. Peru exports to the USA and the EU. The timing also differs, with the California season from mid-November until May, whereas Peruvian wax is from June until October.
Parsons: “Israel began commercial waxflower production in the 1970s which expanded so rapidly that the Israeli government-imposed growth quotas when waxflower production exceeded 200ha. Israel historically supplied waxflower between January and April. Significant progress in breeding with a focus on early flowering varieties, helped the country harvesting waxflower as soon as October. As a result, Israeli growers can now fulfil the boom in demand in the run up to important floral holidays such as All Saints’ Day, Christmas, Valentine’s Day, Women’s Day and UK Mother’s Day.”
Israel has an estimated 250 hectares of waxflower production with an annual output of between 50-60 million stems. Current waxflower production in Australia is estimated at 6 million stems per annum harvested from 90 hectares with a farm gate value of approximately $3 million (AUD). Production is geographically concentrated on Australia’s west coast, while the Grampians region near Melbourne has seen some expansion in waxflower plantings. This region extends the Australian waxflower harvest window into late November/early December.
Current waxflower volumes in South Africa are estimated to be approximately 8-10 million stems per annum, with plantings increasing in the coming years. In the USA, current waxflower plantings span an area of 300 hectares with a gross farmgate return of USD 6.6million. In addition, the USA is a major importer of Australian, South African, and Peruvian grown waxflower from June until November.
Missing on the waxflower world map are Kenya and Ethiopia. “This is primarily an issue of climate and environment. Waxflower requires cooler nights and shorter day length to induce flowering. Thus, equatorial, and high-altitude locations are not able to achieve this with waxflower. There is scope to manually manipulate day length but given waxflower in a large area outdoor crop to date this has not been done on a commercial scale.”
China is primarily a consumer of waxflower, says Parsons, “The Chinese source their flowers from South Africa, Australia, and Israel. I believe there is a small scale of waxflower production in the Kunming region which flowers around the Chinese New Year.

The table below shows the estimated value of global waxflower sales

Helix Australia takes a proactive approach to building the waxflower brand. At the grower’s level, there’s the forthcoming waxflower tour of South Africa (8-15 August), giving participants a behind-the-scenes visit to three large-scale waxflower farms in South Africa.
Parsons explains: “Of all our global production zones, uptake has been the best in South Africa. Our three growers there operate state-of-the-art production facilities. We have set up this tour so our Israeli, new and prospective growers can witness our varieties in a commercial setting and learn from the sophisticated production systems established by South African growers.”