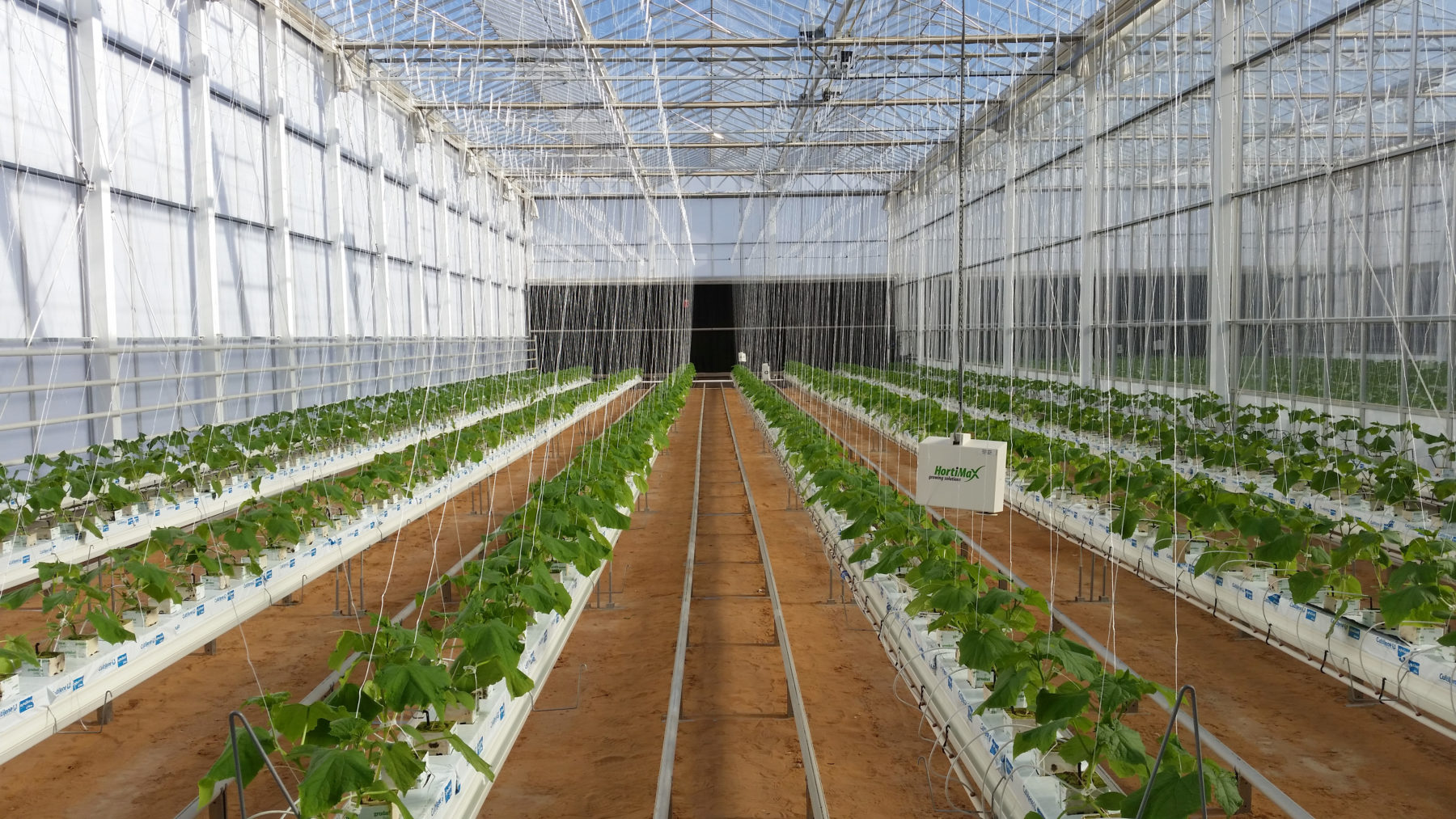 When greenhouses were invented, it was because growers wanted to protect crops from the weather. But the drive to be increasingly independent of external conditions has brought crops out of the soil and enabled ever-closer control over expensive inputs such as energy and water.

“Now we are becoming more independent of chemicals for pest and disease control and even of natural light,” says Sjaak Bakker, manager of the greenhouse horticulture research and development centre at Wageningen UR in the Netherlands, probably the world’s leading centre for commercial greenhouse research.

Independence, in terms of food security, is propelling the huge expansion in greenhouse cultivation in countries such as China, a response to increasing population and a desire for greater control of food safety; and Russia, a result of EU food trade sanctions imposed in 2014. Advances in technology such as the ‘semi-closed’ greenhouse are also enabling food to be grown closer to markets, for example in arid regions of North America or the Middle East, and while much of the technology is designed for the edibles sector it then becomes available to floriculture too.

“At Wageningen we’re now focusing on helping growers be independent of fossil fuel,” says Bakker. “We have a four-compartment demonstration house that’s fully electric. Heat pumps source warmth from the dehumidification system and CO2 for enrichment is taken as waste from a nearby factory.”

Wageningen pioneered the ‘closed greenhouse’ concept and although Bakker says the costs mean it’s not currently commercially viable, many of its components are being more widely adopted. Several leading Dutch greenhouse manufacturers such as Bom Group, Certhon and Kubo have developed variations on the ‘semi-closed’ greenhouse which offer savings in energy – largely as a result of their approach to ventilation – and water use. “In many areas, as with projects we are involved with in the Middle East, water is a bigger issue than energy,” points out Bakker.

At Estidamah, Saudi Arabia’s sustainable agricultural research and development centre in Riyadh, Wageningen is working with Bom Group to compare nine greenhouse designs, including a closed system and a conventional structure with pad and fan cooling, for sustainable crop production in the region. Photoselective claddings are being tested for their ability to reduce greenhouse temperatures.

In the latest generation of semi-closed greenhouses, such as Bom Group’s Sunergy 2, the fan and duct system takes care of more of the ventilation requirements, so the vents and energy screens stay closed longer, retaining more heat. The air treatment units include heat exchangers to recapture heat as the air is dehumidified while summer heat surpluses are stored in an underground aquifer. Overall energy savings of up to 30 to 40% are claimed.

Semi-closed structures also offer some control of pests and diseases. Kubo’s Ultra-Clima greenhouse evolved through work with North American tomato grower Casey Houweling, initially on a way to keep out insect pests. Houweling felt screened vents created too much shade; Kubo’s answer was an active ventilation system, with cooling pads for humidity control, and a degree of positive pressure inside the house. In the last 10 years Houweling has built 50ha in California and 20ha in British Columbia, Canada, enabling him to grow year-round. The design’s water efficiency has also enabled him to build in Utah, one of the USA’s driest states, to supply Salt Lake City, using residual heat and waste CO2 from a nearby power plant.

Greenhouses have been getting taller to accommodate high-wire crops and allow more room for lights and screens – but the greater volumes of air above crops such as cut flowers and pot plants has reduced fluctuations in temperature and humidity. “A gutter height of 6 to 7 metres is probably the maximum it is going to reach,” suggests Bom Group commercial manager John Meijer. “Apart from crop requirements, planning permissions are also restricting heights in some places.”

The quest continues for technology to make better use of natural light. “I’m surprised how much has been done in the last few years to reduce the impact of structural elements,” says Bakker. “New composite materials will enable these to be even smaller. Although we can make some improvements to glass, with light diffusion and non-reflective coatings, we are probably getting close to what we can practically achieve.”

The best available glass can now transmit in excess of 95% of the outside light. Wageningen engineers collaborated with Bom Group over its Winterlight greenhouse, the screen design and high transmission glass resulting in 10% more light reaching the crop than in a standard structure. More growers are opting for diffuse glass in new-builds to improve light penetration into the crop – and research is continuing on light diffusion patterns.

So-called ‘smart glass’ technologies are already available in which panes incorporate layers containing particles whose properties can be altered, for example when an electric current is applied, offering the prospect of ‘switchable’ light transmission or photoselective claddings. Glasshouses with photovoltaic roof panels have been constructed – though with heavy penalties for light levels underneath – but Meijer says glass that can generate electricity may become economically feasible in future.

Technology is taking protected cropping in a new direction with the rise of the ‘urban farm’. Kubo has worked with Lufa Farms in Canada to build three Urban-Clima glasshouses on the roofs of industrial buildings around Montreal – the latest being 5,800 sq m in area.

Meanwhile, Certhon has opened an innovation centre to research crop production in LED-lit closed environments. “Using indoor farming, all outside influences are excluded,” Certhon chief executive Hein van der Sande points out. “With Certhon’s Phytotron system, for example, all climate systems can be controlled – and with indoor farming there is no need for crop protection.” Certhon’s system has already been tested for Freesia production where unpredictable weather influences need to be avoided in the early stages, while Dutch orchid grower De Hoog uses an LED-lit indoor farm to control quality, shorten production times and aid scheduling.

Bakker insists technology must be matched to local conditions, the market and available expertise. “We call this adaptive design,” he says. “In areas like Africa or tropical lowlands in East Asia where some of the fastest expansion in protected cropping is occurring it’s not appropriate to have automatic environment control, for example. The best technology there is spectral-control claddings to reduce tunnel temperatures, passive roof venting and mesh sides.”

He adds: “The fundamental issues in low-technology production are root disease, irrigation and nutrition so the first thing is substrate, rather than soil, cultivation which can improve productivity by 30% without having to address the greenhouse structure.”