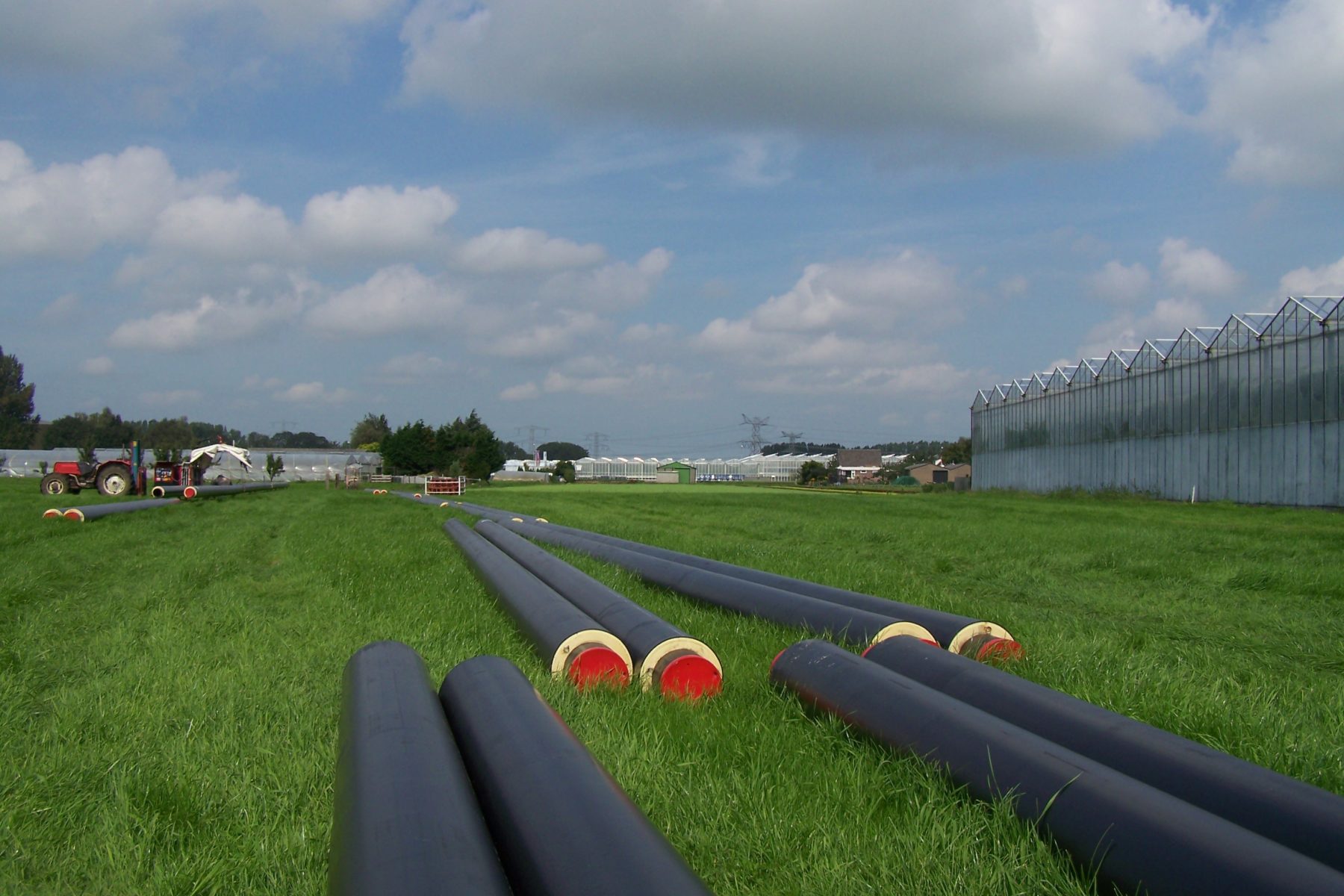 Pipes in the grass.

Discovery of one of the world’s largest fields of natural gas in the world, in the late 1950s, helped propel the horticulture industry in the Netherlands to where it is today. But Dutch government policy over the last few years, to scale back gas extraction and set growers ambitious sustainability targets, has fostered development of alternative sources of renewable energy. In another fortunate coincidence for some Dutch nurseries, one of these is the plentiful supply of hot water, albeit deep underground, that they sit on.

Financing the infrastructure to access geothermal energy needs deep pockets. But several installations are now up and running in the Netherlands in projects largely driven by the growers themselves, backed by geothermal specialists. Koekoekspolder in the province of Overijssel is an important area for glasshouse production. A group of growers there started to look into the potential of alternatives to gas to heat their crops 10 years ago, with the help of engineer Radboud Vorage of AgriProject. “At the time gas prices had rocketed on the back of the oil price which had exceeded 100 dollars a barrel,” he recalls. “It turned out that geothermal energy presented good opportunities in our area so we worked out a plan to establish a geothermal well and started the company Aardwarmtecluster 1 KKP BV.”

Two wells, drilled to a depth of almost 2km, are actually involved in the set-up. Ground water at a temperature of 75°C is pumped up from one, passed through a heat exchanger to warm up water in a closed loop connected to the nurseries, and then returned to the ground via the second well 1.5km away.

The water in the nursery loop is heated to 72°C and arrives first at the three sites growing cucumbers and tomatoes, crops which have the highest heat demand; when its temperature falls to 37°C, the water then travels to the nurseries producing lettuce, pak choi, strawberries and organic vegetable seeds. At 20°C, the water is returned to the heat exchanger, bringing it back for reheating from the deep sub-surface reservoir to start the cycle again.

Requirement for a solid business case Seven nurseries within a 2km radius are currently connected to the network; an eighth, growing organic tomatoes and peppers, will join this year, bringing the total area of glasshouse crops heated by the project to more than 26ha. “In the Netherlands the minimal requirement for a solid business case for wells at a depth of 2 to 3km is at least 15-25ha of greenhouses with a yearly heat demand equivalent to 7,500,000cu m of natural gas, which means the well needs to deliver about 7 thermal megawatts or more of heat,” says Vorage.

“For technical and economic reasons, it is best for the well to produce in a continuous flow,” he adds. “So in spring and summer we have enough heat for everybody but not in winter when, between November and March depending on the crop, the nurseries also use natural gas. It is important to always have a back-up heating system available.”

The project has cost around 12.5 million euros – growers’ own capital investment is backed by loans and grants from various organisations, including the local council, and local and national government. The three growers involved from the outset are shareholders in the company. “Nurseries that joined at a later stage were asked to invest in the heat distribution network, especially the part connecting to their own greenhouse with the network,” says Vorage. Like other sources of renewable heat in the Netherlands such as solar and wind power, geothermal heat attracts a government subsidy under the SDE+, or ‘sustainable energy promotion’, scheme which compensates the generator for the difference between the cost of producing the renewable energy and its market value. Heat from geothermal energy has to compete with heat produced from burning natural gas, says Vorage, and it’s currently ‘substantially cheaper’ to heat a greenhouse with gas.

The subsidy, a feed-in tariff which is available for 15 years, covers the difference and is calculated annually depending on the prevailing gas price. “Break-even [for geothermal] is at a gas price of about 34 to 40 cents per cu m but gas is currently costing 20 to 22 cents,” he says.

The nurseries pay Aardwarmtecluster for the amount of heat delivered to their greenhouses, which works out at present at 5-7 euros per sq m depending on crop. The price is set at a level to account for the fact that for a large part of the season some of the growers have to buy liquid CO2 to maximise yields, which, had they been burning gas, would have been partly available to them ‘free’.

With the well now at maximum capacity, and calculated to have access to enough hot water for 60 years, any further expansion will require another one to be drilled, which the company is planning to have under way by early 2020. “It will be close to the current one and will allow us to supply heat to an increased acreage of glass,” he says. “We already have additional growers interested in connecting to the system.” Even adding the second well to draw hot water from the aquifer won’t mean they will all be supplied with more winter heat. So two of the growers in the scheme are also installing a biomass boiler plant, which will burn scrap wood and prunings, to generate heat over the winter. The heat will be available to the other nurseries to buy, further reducing the group’s dependence on fossil fuel.

While geothermal heat is no cheaper than natural gas, the main benefit to the nurseries on the network is in reducing their carbon footprint, says Vorage. “Many growers are using geothermal because of being able to promote their business as using green energy,” he says. “It is a high investment so cooperation between growers is the only way to make it available and affordable.”

With the Dutch government committed to stop producing natural gas altogether by 2050, it may not be long before the economics swing in favour of geothermal schemes.