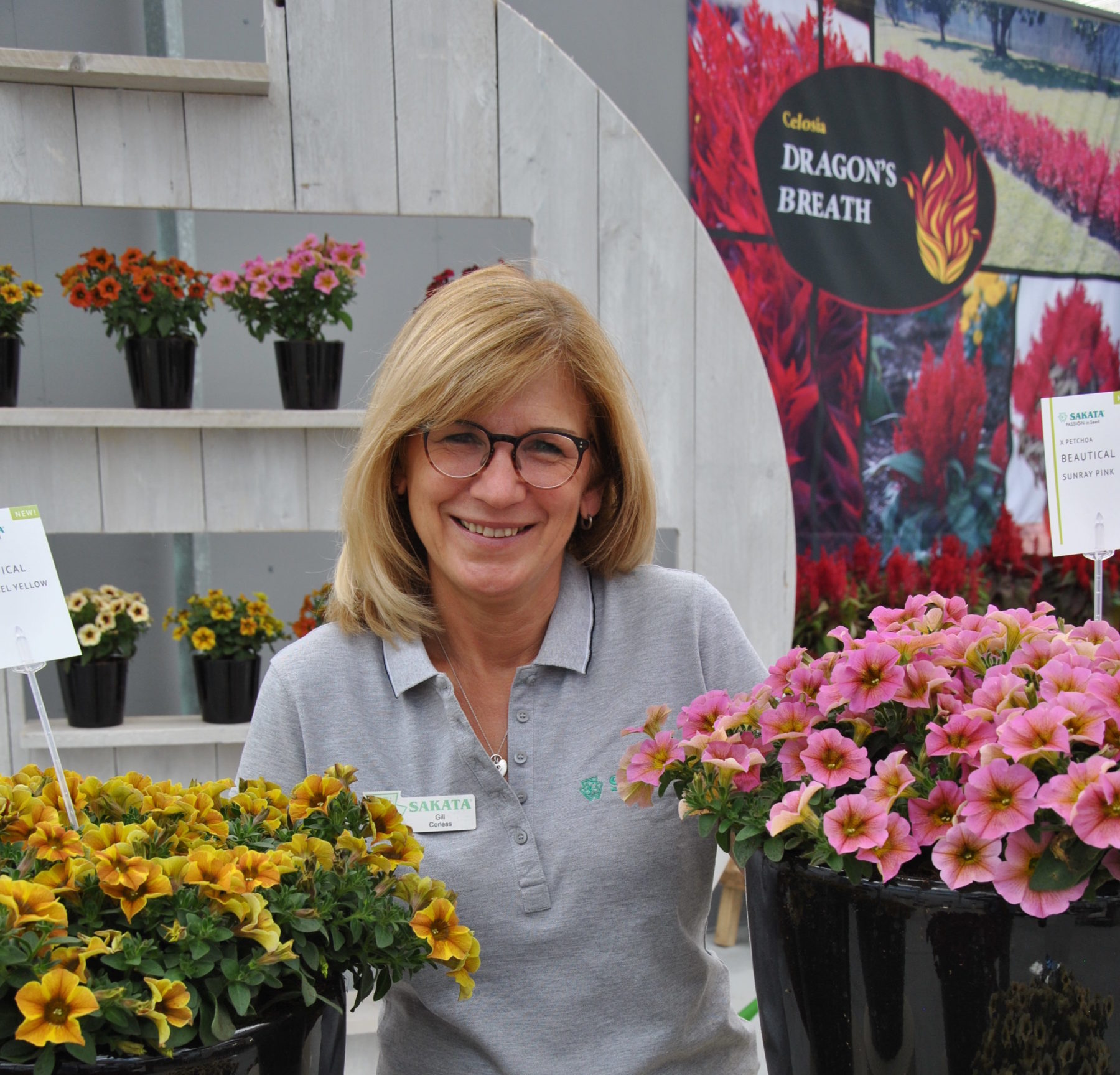 This year’s FlowerTrials® took place June 12-15 in the Westland and Aalsmeer regions in the Netherlands and the Rheinland Westfalen region in Germany. A record 60 breeding companies launched thousands of novelty pot and bedding plants and merchandising programmes and concepts. In attendance were growers (37% of total visitors) followed by import/export specialists (21%), breeders/young plant producers (12%), retailers (6%) and auction representatives (1%). Here’s our take two on the biggest stories from FlowerTrials 2018.

To help customers narrow down which Sunpatiens are the best fit for landscape projects or retail shelves, the company completely reorganised the product offering consolidating it into two distinct series: SunPatiens Compact and SunPatiens Vigorous.

SunPatiens Compact stands for plants with shorter internodes and excellent branching. The series is bred for smaller container production and will help SunPatiens breakthrough at the retail level. To date, there are 12 colours available in the compact range with the slightly two-toned ‘Compact Orchid Blush’ being the latest newcomer.

SunPatiens Vigorous is a firm favourite with landscapers and ideal for massive, colourful and municipal planting applications. Plants feature a strong, upright habit with sturdy stems. Vigorous Lavender is said to be the most vigorous of all SunPatiens. This year, ‘Red’ replaces ‘Vigorous Scarlet Red’ while ‘Rose Pink’ is completely new.

Petchoa is a hybrid cross bringing together the best characteristics of Petunia and Calibrachoa, and is said to be tolerant of cold, heat and rain. In the build-up to the trials it lived up to the expectations with the outdoor display of Petchoa Beauticals amazingly bouncing back after torrential rain and wind.

Beauticals has foliage that is not sticky, so flowers drop easily from the plant as they age. What’s more, they are available in five fancy colours: cinnamon, French vanilla, caramel yellow, Bordeaux and Sunray Pink which beautifully blend into mixes. These upgraded Petchoas stand out for their mounded habit and large flowers which, according to Sakata, “will fly off the retail bench.”

Calibrachoa varieties bred in Israel and Germany, Dahlias bred in New Zealand, Sunpatiens in Japan, by Sakata, Lantana bred by Syngenta. Isotoma bred in the UK. All these and much more featured in the wide-ranging Trials display by Israeli propagators Cohen.

For many visitors, probably the most immediately noticeable varieties were of Dahlia and Dianthus. The Imagine Dahlia collection comprised fifteen varieties bred by Volmary (brand-named Lubega by them). There were also the dramatically dark-leaved single-flowered Mystic varieties, bred by Kiwiflora.

In Dianthus, there was an impressive display of varieties in the thirty-strong Divine pot carnation collection. These were bred in Israeli by Breier, whose breeding activities also include Bacopa, Calibrachoa (the large Caloha series), Nemesia, Lobelia, Verbena and Petunia (the Happy series).

Sunsation, the variety that has proved a pace-setter in the market for dwarf pot sunflowers, was the focal point in the Evanthia display at the Trials. The original Sunsation Yellow was shown alongside its sister varieties, Lemon and Flame, a bicolour. These two are re-introductions, both in improved versions with closer uniformity to Sunsation Yellow.

There was a display of young tropical plant material, too, including Monstera deliciosa. This is an Evanthia specialty, grown from seed obtained from sources known personally by m.d. Nico Grootendorst for their high standards. The species is one in an extensive Evanthia listing of foliage plants popular as indoor house plants, especially in northern Europe. Both seed and young plants are sold.

The Begonia series Bossa Nova was in the prime position on the stand of Floranova, the British breeding company specializing in seed-raised ornamentals. The new Night Fever Papaya has orange-red flowers and is the first truly dark-leaved variety in this B. boliviensis hybrid series. Introduced in 2014, there are now eight colours. In the marketplace Bossa Nova is making its mark as an alternative to cuttings-raised series.

The interspecific Dianthus series IQ was in preview status, with its launch planned in 2019. It is claimed to be earlier by five days than the competition.

Vegetalis is the associate company of Floranova founded to specialise in edibles, primarily for the patio container market. The current emphasis in breeding work is on disease resistance. The new Vegetalis tomato variety Summerlast, for example, has TMV and TMV2 resistance.

Innovative grafted products – basil and Calibrachoa – gave clear distinctiveness to the Trials presentation of Hishtil, Israeli breeders and propagators. For their new Funtastic Calibrachoa trees, scions of varieties in the Caloha series are grafted on to specially grown Petunia stems.

Hishtil has already established a name for themselves for their basil trees. Trials visitors saw examples of these using a number of different varieties. The small-leaved El Greco was among them.

Lavenders are another Hishtil speciality. On display were experimental varieties of both Lavandula angustifolia and L.stoechas. In the Libelle series of L.stoechas, Purple, Compact Blue and Compact Rose were all new. In the same species there was an experimental series Lavish, also to see.

Gaura and Penstemon were among other genera shown on the company’s Trials benches. The dwarf, compact Gaura Summer Stars Baby, a newcomer, attracted much interest. Pentastic Blush was new for its recently introduced dwarf Penstemon series, large-flowered and very suitable for patio containers.

Unrooted cuttings in a range of over 450 varieties are offered by the Israeli company Jaldety Propagation Nurseries. At its Trials display Thunbergia, Delosperma and Salvia varieties were among the most immediately noticeable.

The Jaldety family concentrate on less usual perennials and annuals. They also select plants that are valuable for their complementary textural qualities, such as Calocephalus brownii Silver Stone. A newcomer in their current listing, on show at the Trials is Cyperus alternifolius Little Prince. Another is the dwarf sedum Makinoi Lime, one of eight varieties offered in this genus.

Salvia is an important genus for Jaldety. In their Trials display this year was the new hybrid Amacite, deep pink, and Kisses & Wishes, pale pink, new for the Wish series. In S.greggii the new variety Joy, again a pink, was among their Trials eye-catchers. The established purple-flowered variety Amistad is among their top products.

Sundaville and Grandaisy were the two names most in the spotlight at MNP flowers’ Trials presentation this year. From Japanese breeders Suntory, Mandevilla (Dipladenia) Sundaville is now a very well established brand with almost thirty varieties. Originally in red, pink and white, the colour range has now been extended, with the two new varieties Soft Peach and Apricot. Visitors this year were also able to see another newcomer, Mimi Red. This differs from Sundaville varieties of similar colour in its compactness and earliness. It is suitable for small pot production.

MNP flowers presented a new event for retailers this year, to promote the Sundaville range (pages 16 and 17.)The Argyranthemum hybrid series Grandaisy is a much more recent introduction. This year three more colours have been added – Gold, Ruby and Pink Tourmaline. This brings the total number of these free-flowering plants to eight.

In the Senetti series there was also a new colour on show, the first white. Flower centres are dark blue, the contrast adding to the impact.

Sunbelievable Brown-Eyed Girl, a new hybrid sunflower variety, was the centrepiece of the Thompson & Morgan stand. Cuttings-propagated, it is sterile and produces its large red and yellow flowers over a long period, on freely branched plants.

On their Trials stand, their new Isotoma (Laurentia) series Fizz ‘n Pop featured prominently. So did their cosmos varieties Lemonade, Cupcakes and Cupcakes Blush. The novelty zonal pelargonium Tall, Dark & Handsome featured, too, dark-leaved, red-flowered and with a long-stemmed erect growth habit that makes it ideal for training up on a trellis.

Fragrant Falls, the semi-trailing Begonia tuberhybrida series was also a stand highlight. In the company’s own retail sales, Fragrant Falls is among its most enduring successes. Plants are available to the trade in Europe from Beekenkamp Plants.

Long established in retail seed and plant business in the company’s own country, the UK, Thompson & Morgan also has worldwide seeds sales and releases new vegetatively-propagated varieties into the international trade.

Volmary put on show one of the most wide-ranging product displays of the Flower Trials. The highlights were very different from one another – among ornamentals the climbing plant Thunbergia alata, and among edibles the ‘Candy Bar’ a free-to-taste presentation of tomato and pepper varieties.

There were new varieties in the cuttings-raised Sunny Suzy series of Thunbergia, such as the bicolour Amber Stripes. The colour range includes rose as well as the original orange and yellow. Mixed containers, with two or three of these colours, particularly drew visitors’ attention.

Volmary’s interest in edibles does not stop with tomatoes and peppers. At the trials they were also displaying their sweet potato variety Erato White, and Inka, a variety of a South American tuberous plant called Yacon, but also known as the Peruvian Ground Apple. Volmary has its own breeding programme in sweet potatoes, with the intention of producing varieties especially suitable for cooler countries.

Among ornamentals, dahlias figured prominently. Again, Volmary has its own breeding programme, with Lubega as the brand name. A target is to develop growth habits for which the growers needs to pinch once only, or even not at all.

Other Volmary varieties on show at the Trials included the Evita series of Lantana, Calibrachoa Calita series and the new dark-leaved zonal pelargonium series Choco, which is double-flowered.