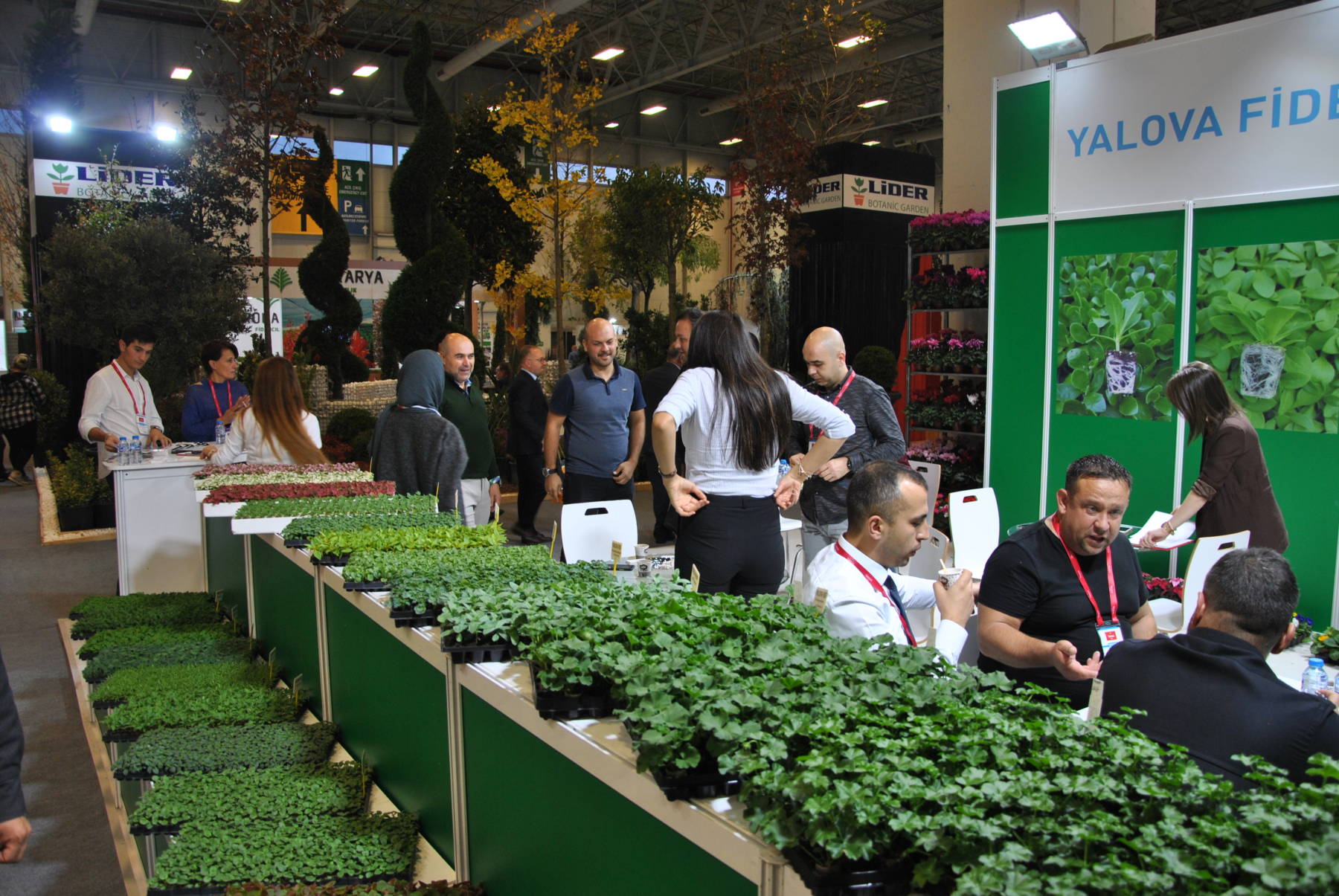 Turkey’s fledgeling ornamental horticulture industry has made significant progress since the first large-scale flower and plant nurseries emerged in the late 1980s.  Fuelling the sector’s growth in the last 11 years is the Flower Show Turkey/Eurasia Plant Fair which was held at Istanbul’s Tüyap Exhibition Centre from November 14-16, 2019.

Next time your Istanbul-bound flight has landed and is taxiing at the city’s brand new airport, look outside. With a bit of luck, you will be able to see the grand façade of Turkish Cargo’s ultra-modern 300,000m2 cargo terminal including a 5,000m2 constant-climate perishable centre. It’s a clear sign that Turkey is ready to take on its logistics role in the global cut flower and ornamental plant trade.

Exhibitors and visitors at Turkey’s annual Flower Show Turkey/Eurasia Plant Fair have even bigger ambitions for the future. Take the Central Anatolian Exporter’s Union (OAIB) and its Ornamental Plants and Products Exporters Union (also known as Turkish Flowers), which repeated its extremely ambitious target to increase export revenues from $99.3 million in 2017 to $500 million in 2023, the centenary anniversary of the Turkish republic.

OAIB’s plans can be seen in the context of much broader attempts by the country’s President Recep Erdogan to ensure Turkey joins the world’s top 10 economies when the country marks the centenary of the republic. Launched by the Turkish Ministry of Economy and Turkish Exporters Assembly in 2009, the Turkish Exports Strategy for 2023 aims at reaching 500 billion dollars of exports volume in 2023.

The year of national celebrations should Turkey see taking a 1.5% share from the world’s trade while reaching an 80% import/export ratio. The economy needs a shift in production from low to high productivity goods to achieve such growth, as well as improvements in automation and technology and a strong focus on R&D.

While the ornamental horticultural industry is no stranger to technological change, you won’t yet find robotic arms, drones, unmanned tractors and the internet of things in Turkey’s wholesale plant nurseries at the moment. What’s more, the country has entered a prolonged period of lira weakness with a strong dollar triggering the currency’s fall, and that’s bad news for Turkish trade. Think investors who are increasingly worried that Turkish companies that borrowed money may not be able to keep up with their repayments in dollars and euros as the weakened lira means there is now more to pay back.

“A weak lira is good for us as a cheaper currency makes my flowers more cost-competitive versus international trade partners and supports Turkish export growth,” explains Abdulhamit Başkurt, a Turkish Flowers board member. He continues, “On the other hand, the depreciation of the lira pushes up import prices. It’s now more expensive to buy young plants, fertilisers, growing media and other supplies in euros. So a weak lira brings some instant satisfaction but no happiness in the long run.”

Başkurt sells his MPS-ECAS certified Ranunculus, Ornithogalum and Dianthus Green Trick through Royal FloraHolland, the Dutch cooperative that registered him as a full member in 2017. He grows his flowers on 8.5 ha of land in Alanya against the backdrop of blocks of holiday resorts and takes great pleasure in his floral job despite spiking electricity prices and scarcity of land. He says just ten dekar (1ha) is already hard to find and if you do so it is only available for rent which doesn’t make for a serious business investment. With Dianthus being a quintessential British flower with UK-based Flamingo IPL sourcing sizeable numbers of his flowers, Başkurt thinks Brexit Britain will promote trade with Turkey to compensate for the anticipated loss within the EU zone. “Improving its relationships with Turkey over the past two years, the UK has identified Turkey as one of three target markets. Ultimately, the goal is to boost the UK’s export sales. However, it may also allow Turkey to strengthen its position in the UK’s floral supply chain as a weaker lira has made our flowers more affordable.”

Meeting with the international trade press, Ismael Yilmaz, chairman of Turkish Flowers and board member of AIPH, says Turkey is making significant progress in the export arena. He points to the latest data from OIAB that shows the country’s share in the world flower trade is increasing year over year. For 2019, it is estimated that the value of floral exports from Turkey will reach $110 million, an increase of over $52 million since 2010.

Yilmaz describes the per capita consumption of flowers and plants in Turkey as ‘moderately dynamic’, being €4 per capita. “There is still plenty of room for business growth with supermarkets being a somewhat untapped outlet for cut flowers although BIM and Aldi run their floral departments,” notes Yilmaz.

In an attempt to open the country’s supermarket segment to Dutch flowers, Royal FloraHolland ran its own Turkey Development Programme which saw the auction being prominently present at Flower Show Turkey with a huge House-of-Opportunities-stand in 2015 and 2016. The Dutch growers’ cooperative also used glittering events such as a Tulip Carpet in Istanbul’s Sultan Ahmed/Aya Sofia Square and a cocktail party at the Palais de Hollande, the Consulate General of the Netherlands, in their bid to lower Turkish import tariffs for flowers (48%) and plants (22%). Now three years later, there is no trace left of the House of Opportunities; the Turkey Development Programme has been suspended, and import tariffs have remained unchanged.

The nature of the Turkish ornamentals – nursery stock plants, cut flowers, bulbs and cut foliage – being exported is also unchanged, so is its customer base. Of the 77 countries, Turkish Flowers reported delivering flowers to since 2000 many are diplomatically friendly.

The Dutch dominance ($24 million) can be attributed to the significant volumes of Turkish grown cut flowers (primary seasonal flowers) and cut foliage (Aspidistra, Asparagus, Aralia) that are sold at the Dutch auction. The UK and Germany’s presence in the top five can be explained by Turkish carnations being a favourite filler flower in British mixed bouquets and Turkish seasonal flowers riding the wave of popularity, in Germany respectively.

Turkish Flowers ranks Uzbekistan and Azerbaijan at the second and fourth-largest export destinations for Turkish grown ornamentals (read nursery stock). Yilmaz explained that Turkey has the world’s second-largest contracting sector, after China, and a significant number of Turkish landscape firms  work together with general contractors at home and abroad.

General contractors from Turkey have won many contracts in Uzbekistan, for example. The country is currently transforming into an open-economy with room for a private sector-driven economy with a huge amount of building underway. Turkish construction specialists oversee the buildings while Turkish landscaping companies design and execute the landscape portion of the projects. This is done in Uzbekistan, Azerbaijan and a variety of other countries within the Commonwealth of Independent States (CIS) which is comprised of former Soviet republics. Turks usually refer to most of them as ‘Turkish republics’ , the ‘new’ republics in Central Asia with an excess of 160 million inhabitants. Turks share cultural traits and historical backgrounds to varying degrees with most of these republics and this facilitates growth in exports.

Highly qualified to serve general contractors are husband and wife team Nesrin and Yadin Otuzuglu who run the Adana Plant nursery in Sakarya and Karaoglu Peyzaj landscape contracting with branches in Istanbul and Ankara. Over the past few years, they have been engaged with many projects enhancing the natural landscape, including Zorlu, dubbed Istanbul’s finest residential and commercial real estate development in the Beşiktaş area.

With Turkey unlikely to return to its growth levels seen in the early 2000s in the short term, the couple told FCI that when it became harder to maintain growth, their focus has been on cost reduction and increasing export sales. Currently they are busy with landscaping projects in South Africa and Bulgaria while developing sales of tree liners to Netherlands and Italy (Betula, Pyrus calleryana and Acer globosum).

In tough economic times, Serkan Kanbur, landscape architect and owner of Verticalle has chosen a strategy that involves adding products, services and markets to the company’s portfolio. He thinks this sets him apart from the competition. Verticalle serves as the umbrella for the sub-brands such Vetiver (Chrysopogon zizanioides), a tropical, non-invasive clump forming grass that is used around the world to control soil erosion, stabilise slopes, control floods and decontaminate land and water, the Chinese SOL brand representing modular systems for vertical gardening and Q Grass turf grass. Especially their flower archways used for weddings or decoration in city squares and parks have been much photographed and shared via social media.

Big leafy camouflage-type and palm tree plants are becoming increasingly popular around the world and, as such, were lavishly on display at Flower Show Turkey. Adem Karacadağlı, director of floral wholesale company Flower King BV, imports modest volumes of Philodendron, Yucca, Areca and Schefflera from Antalya-based Imaj with whom he shared his stand. “This was our first year at the show and all went very well. The people we expected to see were here and all three days have been really good, bringing in leads from both existing and new customers,” says Adem.

The fact that Flower King BV, operating from the Dutch flower auction in Aalsmeer, was the sole floral wholesale company from the Netherlands can’t have harmed the traffic at his stand. Adem says his career in the floral industry spans more than 20 years with 2008 marking the foundation of his own company. He attributes 99% of his business to exports of plants and flowers with cut flower sales more predominant in the run up to the big three in floral holidays: Valentine’s Day, International Women’s Day and Mother’s Day. Constantly fluctuating exchange rates impact day-to-day business but when looking back on 2019, he sees more stability and sales have been pretty good. “Turkey is a large market with a population of nearly 80 million people. Growth can be reached across all market segments especially at the retail level with supermarkets looking for ways to increase the size and sophistication of their floral departments to generate impulse sales.”

Green foliage plants galore at Maki’s stand with owner Fikret Arik just back from the Netherlands where he promoted his wide range of cutting-raised Ficus benjamina and Ficus nitida among international plant buyers. At home he sells his plants to interiorscapers and wholesalers and hotels.