PADUA, Italy: Celebrating its 70th anniversary, Flormart returned to Padua on 26-28 September 2019. Show organiser Cristiana Bertero and her team are pleased that despite the show’s relaunch under new ownership and the pressure that accompanied planning the event during a time of transition, approximately 6,000 people attended the show for plenty of networking, educational and business opportunities. 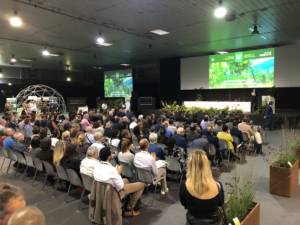 The road to this year’s Flormart was bumpy, to say the least, with its venue, Fiera di Padova,  making the switch from private ownership back to public on June 20, 2019. As such, the show was re-launched under new ownership (city, Chamber of Commerce and province) and, considering all this was done fairly last minute, show organiser Cristiana Bertero and her team deserve credit for setting up a show with 300 exhibitors showcasing their newest products and services in a freely-networking and friendly atmosphere.

“Things remained more or less unchanged from last year. It was a good show with the majority of exhibitors being satisfied with the number of quality leads. Young plant growers were definitely among the happiest while some nursery stock growers would have loved to see more visitors. Now that Fiera di Padova’s management structure is finally clear our hopes are set on continuity and growth,” says Edoardo Sciutti from the Italian Nursery Exporters Association ANVE.

The association’s partnership with Flormart was again a resounding success with over 30 member growers exhibiting in hall 5. For the occasion, ANVE held a seminar on the EU’s new plant health regulations where AIPH Secretary General Tim Briercliffe was one of the keynote speakers.

Flormart, one of Europe’s oldest horticultural trade exhibitions and since 2018 approved as an AIPH approved (D) category show, was developed on the tagline ‘At the heart of a sustainable future lies a green landscape’ and embraced Italian and international horticultural communities.

Besides the ANVE seminar the show offered plenty of other learning opportunities such as conventions, meetings, educational programmes, training, a new GreenInnovation Hub and the Giardino Italia.

Bequeathed with decades of experience and wisdom, Flormart 2019 knows how to host a horticultural trade show. But this does not make its organisers complacent. Flormart continues to evolve to offer a  dynamic and innovative trade show experience, due particularly to recent adaptions and developments which are driving the show and the horticulture industry forward. AIPH Secretary General, Mr Tim Briercliffe commented: “Flormart is strongly focused on important topics facing the industry today and on developments for the industry of the future. We are very proud that Flormart carries AIPH approval. Under new management, this event is investing for the future to provide a truly international platform for growers to exhibit.”