Floritec has quickly made a name in the floral industry by breeding durable, disease and pest resistant, high yielding Chrysanthemum varieties that require small inputs but make a big impression.

Floritec’s rapid rise to prominence in fewer than fifteen years is truly remarkable. It came from a relatively unknown Chrysanthemum breeder to a tried and trusted supplier of established brands such as Calimero, Rossi and Ellison Santinis and Da Vinci pot mums and achieved customers worldwide. 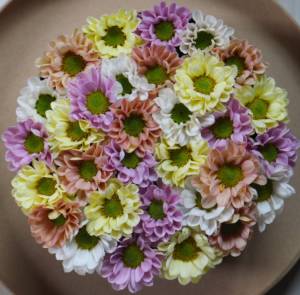 Rossi is one of Floritec’s established Santini brands.

The modern Chrysanthemum occupies an outstanding number two position among the world’s top three of most traded and grown cut flowers.

In 2020, there was about 32,034ha under glasshouses or in the open dedicated to Chrysanthemums. In that same year, the value of global Chrysanthemum trade amounted to €255 million, according to AIPH International Statistics Flowers&Plants 2021.

The stability of sales, the market size and security was impulse enough for Floritec to tackle the sophisticated world of Chrysanthemums, which by no means was unknown. Each of the original four founding partners within Floritec had a vast knowledge base and experience in Chrysanthemum breeding. An excellent combination of youth, experience, team spirit, and passion helped the newcomer quickly gain ground over its competitors.

From the onset, Floritec opted for a flat management structure; the lines of communication are short, making the firm responsive to change and decision-making quicker.

The business model reflects the company’s mission values which read as follows “…providing the world’s happiness through an array of beautiful flowers and pot plants. Our varieties grow under a wide range of climatic conditions with the least possible chemical use, thus contributing to more sustainable production. We want our flowers and plants to inspire people of all generations, to value and preserve the beauty of nature.”

The new logo combines a human figure to connect with Floritec and its customers worldwide. At the same time, a test tube symbolises high tech plant breeding and a constant flow of innovative products – including product diversifying pot aster and pot celosia – as a basis for the company’s ongoing success.

Standing out from the crowd

Floritec isn’t the only one breeding Chrysanthemums, so they do a number of things to differentiate themselves in the marketplace. 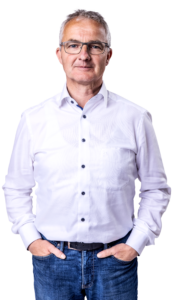 Floritec boss Jeroen Ravensbergen says, “Without this adversity, essential elements like standing out and establishing industry expertise would have been much harder to achieve.”

The Floritec headquarters is in Woubrugge. It does not include the usual glasshouse facilities and test greenhouses to manage numerous genetic material lines to produce marketable varieties.

Floritec boss Jeroen Ravensbergen elaborates, “Modern plant breeding is research, time and capital intensive. As a result, the barriers to entry are also high. When we started our company, the competition was fierce, with competitors having more resources and more established names. Our pockets were insufficient to invest in extensive research and testing facilities. So, the company decided to conduct plant breeding programmes in situ – that is inside the grower’s greenhouses across the world.”

The obstacle Floritec faced early on ended up helping the company build its customer base and positive reputation. Ravensbergen says, “Without this adversity, essential elements like standing out and establishing industry expertise would have been much harder to achieve.”

There is no better timing for custom made Chrysanthemums. After years of alleged ‘anti-Chrysanthemumism’, the golden flower’s popularity is currently rising again with shoppers.

Undoubtedly, the Covid-19 pandemic has had a huge impact: the pandemic’s beginning saw the closure of garden centres and flower shops, causing a dramatic drop in demand and millions of binned flowers.

The story is very different now, with Chrysanthemums everywhere, from luxury fashion to the high street.

Commenting on the state of the Chrysanthemum trade nearly two years after the first cases of Covid 19, Ravensbergen says, “The Omicron variant impacted people’s decision to travel, especially because as new travel restrictions were once again put in place. As a result, they spend more time at home and buy more flowers.”

People’s relationship with all things nature has emerged as one of the sources of pleasure during lockdowns. GenX and Millenials are more likely to purchase flowers than in the pre-Corona era. Often, they settle for seeking out the latest trending products that are distinct and cool. As such, it is no surprise that across all Chrysanthemum categories, Floritec’s cheery Santinis and artisan disbuds are perfectly on-trend. 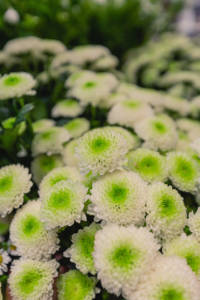 Maverick: White and yellow are the world’s best-selling Chrysanthemum colours. They are well-represented in Floritec’s latest Santini series Maverick, which debuted last year. Chrysanthemum experts describe the new Maverick as world-class Santinis in golden (Santini Maverick Gold) and yellow (Santini Maverick Sunny) colours. The news of the moment is Maverick White. Maverick White is unusual because of its snowy white petals and features a long-lasting and fresh green heart’. This new variety accentuates brighter, more eccentric florals in a bouquet, and this contrast are warmly welcomed by florists worldwide.

Floritec works with high-quality Chrysanthemum growers worldwide to bring them the very best new flowers on the market, together with tried and tested more established varieties.

Whether these are Colombian growers serving the USA big box stores, specialist growers in Poland or Japan, or retail growers in the Netherlands, the breeding company says it can meet the divergent customer requirements from different growers.

In Poland, for example, growers revel in Santinis, in particular in Floritec’s Calimero Santinis. This series provides them with new levels of crop security. Currently, Calimeros (belonging to the pompom type) are available in nine colours, all of which transport well and stand out for their optimum vigour and consistent yield.

Its top-selling Santini Ellison series is available in seven (pastel) colours and features multi-petalled pompoms. Santini Rossi is the name of another favourite Santini series with Polish growers. The series includes single type blooms with a flat centre and radiating rows of petals

Alongside Poland, Japan, the Netherlands, and Colombia, Italy is also a hotspot for Chrysanthemum production. Michele Alfano from Sicily-based Spais Fiori takes great joy and pride in growing 15 Floritec cultivars.

The Alfano family is from Pompei, near Napels. In this family, the floral trade and production are important; Michele’s father Giovanni has run several cut Chrysanthemum nurseries, while his uncle runs a floral wholesale business.

Michele is deeply attached to both his place of birth and the Isola del Sole (island of the sun), which became his second homeland. Chrysanthemum remains Spais Fioiri’s core product. Yet, today they have expanded their business to include Statice, Lisianthus, Lilium (asiatics and longiflorums), Dianthus barbatus, and Callistephus chinensis Gypsophila also comprise a portion of their business.

Social changes and consumer behaviour developments motivate Spais Fiori towards product diversification. Michele explains, “You are absolutely right that in predominantly Catholic Southern Italy, Chrysanthemums will mainly go to cemeteries. However, it is important to factor in that the tradition of decorating the graves with Chrysanthemum is slowly dying out with the younger generations. This development forces us to develop new sales strategies and markets.”

Spais Fiori’s primary customer base remains wholesalers and smaller vendors. Their most vital customer base is in Sicily, but buyers come from as far away as Calabria, Campania, Lazio and Tuscany.

On the same page

Michele took his early education at Wageningen Horticultural University in the Netherlands, and it was there that he forged many business relationships. He notes significant differences among work-related values between Italy and the Netherlands but feels that he and Floritec have been on the same page since they first met 11 years ago.

He comments, “Their breeding programme is simple, but extremely intelligent, and develops improved varieties to meet the specific needs of growers, each of them operating in unique, sometimes extreme, growing conditions. Whether growers are in Western and Southern Europe, South America or Asia, Floritec will always try to put itself in the grower’s place, focusing on geography, greenhouse tech, soil, water and climate. Plant breeding under extreme growing conditions will ultimately lead to reliable varieties for the grower. Floritec’s customised breeding approach has allowed us to continuously expand our product portfolio, adding new colours and flower shapes, all adapted to thrive in the conditions that prevail in Acate.”

There are many characteristics where breeding can manipulate the ideal selection for the economics of Chrysanthemum growing. Michele mentions the criteria of aesthetic value, bud count, flowering response, stem weight, disease resistance, PGR demand, shelf life, uniformity, plant density, and heat resistance and demand. He elaborates, “Climate-resilience is vital when considering the skyrocketing energy prices. A new variety capable of adapting itself to lower temperatures without heating or one that can withstand extreme heat – summer temperatures in Sicily easily rise to 40 degrees Celsius – without the need of greenhouse cooling makes for us the perfect Chrysanthemum.” 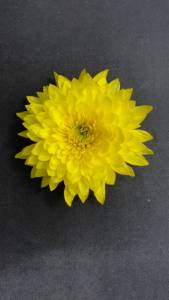 Spais Fiori has a full-colour range of Sicilian grown Chrysanthemums available all year round, including 15 Floritec varieties. “Without any doubt, ‘Vallato’, ‘Vallato Sunny’, ‘Maipo’, and ‘Excite’ are proving most popular with our customers. But there is also high demand for ‘Summerflame’, ‘Georgia’, ‘Marshmello’ and ‘Lentini’ whose different colours spice up our product range. It is easy to mention several other high potential varieties that we trail each year in our glasshouses. We may end up with one of the broadest ranges in Chrysanthemums, from 25 up to 30 varieties.”

In an era of global markets, international competition is fierce. The 2019 merger between Inochio Seikoen and Floritec helped both companies to strengthen their market position and combined the oldest, most respected names in the Chrysanthemum business with the ‘new kid on the block’.

The merger gave Floritec access to a rich Chrysanthemum genetics and breeders catalogue. It also allows for more significant investments in R&D as sister company Inochio Agriculture Research Center has ultra-modern R&D facilities for diagnosing pests and diseases and pests and water and soil analysis.

Inochio Seikoen has deep roots in Chrysanthemum breeding and propagating. The company has been developing innovative Chrysanthemums for over 100 years.
Operating from its headquarters in Hiroshima, the company has brought over 5,000 cultivars to the global market ever since. Its people, market knowledge, extensive distribution, product range and support to growers keep the company at the top of the industry.

Inochio Seikoen’s top-selling varieties are the white ‘Sei no Issei’ and yellow ‘Sei no Kosai’ launched in 2009 and 2013. True to century-old traditions, the Japanese use white Chrysanthemums for funerals and Obon celebrations, commemorating and honouring ancestors.

The ‘Sei no Issei’ quickly rose to prominence because it blooms from early summer until late autumn; it is also heat resistant and does not require much disbudding work.

The Inochio business has headquarters in Aichi Perfecture. It has come a long way from its humble beginnings in 1909 with its founding family – the Ishiguros – starting a pharmacy that later became a prominent supplier of fertilisers, pesticides, greenhouse sundries, seeds, young plants and then into a DIY store and garden centre.

In the world of Chrysanthemums, Seikoen is associated with its once highly successful ‘Reagan’ series, launched in 1988 in collaboration with former Dutch breeder’s consortium CBA, including Sunfield Holland and Van Zanten Cuttings.

This article was first published in FloraCulture International in February 2022.