“If life is nothing more than a passage, let’s at least sow flowers along it.” (Michel Eyquem de Montaigne (b. 1556 – d. 1599) . The words of notable French poets and writers past and present blossomed this spring as they were brought to life during the 12th Floralies de Nantes which was held from May 8-19, 2019.

When digging into the origins of Floralies Nantaises you’ll  find that behind philosophical contemplation lies  a grey, impoverished and dreary post-war existence. France had just emerged victorious from World War II but paid a high price. The country was on the verge of bankruptcy and had suffered heavily because of allied bombs. During most of the war a large share of its industrial output was produced for Germany with the allies aiming at destroying their opponent’s morale and economic ability. This explains the heavy allied raids against French industrial targets such Boulogne-Billancourt (Renault factories) and Le Creusot (steel industry). Nantes, home to an important shipbuilding sector, met the same fate when it was bombed in September 1943 taking an unprecedented toll of casualties. 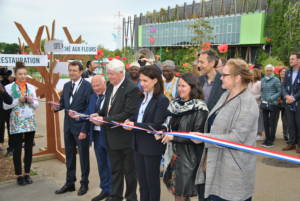 Naturally, the purpose of the Floralies was to promote horticulture and inspire consumers by providing a first class showcase for flowers and plants grown in the benign oceanic climate of western France. As early as the 17th century,  Louis XIV’s Grand Siècle, the region was being used as a mega garden for acclimatising, growing and studying medicinal and ornamental plants which debarked from around the world.

What’s more, the Floralies provided a welcome dose of colour and fragrance to Nantes’ population which had endured so much, for so long. The inaugural edition of the Floralies were held in 1959 in the historical Palais du Champ de Mars food wholesale market in downtown Nantes. “After such a long period of gloom and doom people were craving for greenness and entertainment and the Floralies offered something they had never seen before. At the time there were long queues of people waiting to get in,” recalls an older lady attending the opening ceremony of the 12th Floralies de Nantes on Tuesday, May7th, 2019. 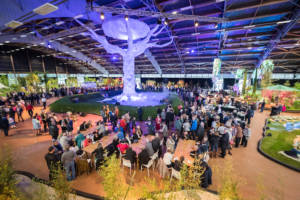 While the two first editions of the Floralies (1956 and 1963) where held in the city centre, the exhibition moved 3 kms north-east, to the Parc de la Beaujoire in 1971, which to date continues as the venue of choice for the event that is held every five years. As is the case with nearly all European flower shows, after its initial heyday in the 1970s and 1980s – with over half a million visitors and 150,000m2 of exhibit space and France’s First Lady, Ms Anne  Giscard d’Estaing opening the show, Floralies’attendance figures slowly started to decline. Now 30 years on, however, the AIPH-approved flower show continues to rank among one of the country’s top attractions welcoming a sizeable number of 300,000 visitors in ten days.
Opening the 2019 edition of the Floralies was left-wing Mayor Johanna Rolland who explained how Nantes values its green spaces, not least for the many benefits it brings to its citizens. Dubbed the City of 100 Gardens, Nantes was crowned Europe’s greenest capital in 2013 following a series of major overhauls and expansions of city parks, an urban green corridors network, public picnic areas across the city, urban farms and a number of floral events and garden festivals. Nantes takes pride in having 57 m2 of green space per person with everyone in the city living within 300 meters of green space. 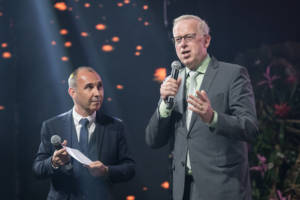 The city of Nantes brims with enthusiasm for its parks as they improve social cohesion, reduce air pollution and the urban heat island and tackle mental and physical health issues. But the majority of its parks are open day and night and are often the only spaces available for homeless people in the city. Nantes is no exception. In September 2018,  French police cleared out over 400 migrants from a Daviais city park where they had been camping for months. The refugee camp along with the city’s urban violent crime on the rise are the focus of huge tension between the city government and its citizens and reveals that behind the rhetoric of reconciling the city with nature for the sake of the city’s quality of life lies another reality. 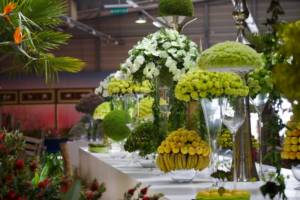 In winning hearts and minds both in the political and marketing sense of the word, little could beat the Floralies this spring, covering an area of 45,000m² indoor and outdoor space. There was the Antoine de Saint-Exupery garden where the  Little Prince explored new planets and (NIRP) roses, there were shining examples of urban gardening and Botero’s trade mark chubbies from Colombia who were lost in salsa…and a lush oasis of potted plants submitted by Colombia growers’ association Colviveros. Also vying for attention was a beautifully landscaped Alice in Wonderland garden symbolising children’s unprejudiced and innocent  approach to the world. At the 2019 Floralies the human life cycle came to life: themed areas recalled innocent and worry-free infancy, adolescence, third age maturity and late adulthood when spiritual concerns take front stage. 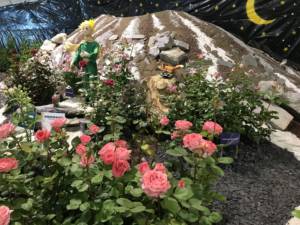 Many designs were based on foreign horticulture with a creation of Niigata city inspired by Japanese gardens while other exhibits echoed the atmosphere of One Thousand and One Nights such as the award-winning garden from Pakistan. Bedouin tents provided inspiration for the desert garden design from Qatar.

AIPH-President Bernard Oosterom was invited as guest of honour and presented the coveted Floralies awards at a special opening night celebration. The first Grand Prix d’Honneur in the categories French and International Collective stands went to Artisans Fleuristes from Loire-Atlantique with their harmonious garden of life and to Pakistan respectively.

In the category of French individual stands, Fevriero Agnès & Lucien scooped up the first prize while Martinique’s Regional Park walked away with the highest accolade in the category of Individual Stands from Abroad.

Amid the arrangements of blooms and endless horticultural varieties was one garden which celebrated a much more natural display garnering the Best Stand Award which featured a tropical rainforest, a creation of Nantes’ department of parks and gardens, SEVE. The same Best Stand Award was also presented to the Island of Noirmoutier, NIRP International/ Pépinières de la Guérinais, the rose committee  Doué en Anjou, Atelier Pilzhaus and Artisans Fleuristes de Loire-Atlantique.