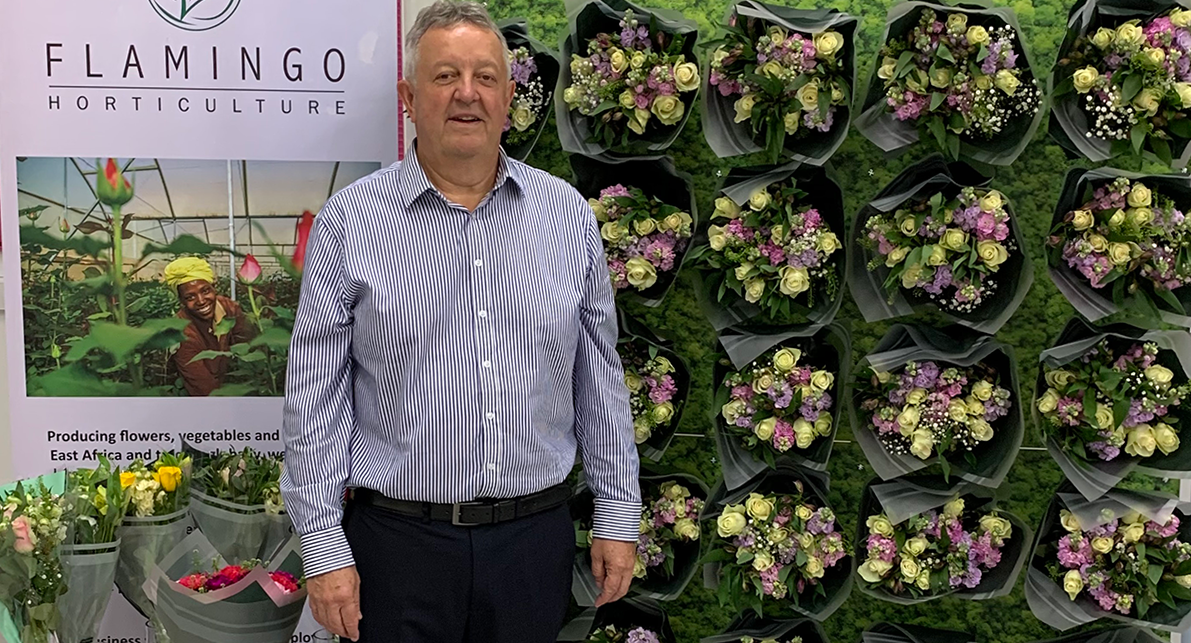 FCI interviews Martin Hudson, co-founder and director of Flamingo International Group, a core supplier of cut flowers and prepared vegetables to most of the UK’s leading retailers, including Marks & Spencer, Tesco and Waitrose, as well as international customers in Europe, South Africa, the Middle East, Japan and Australia.

From humble beginnings in 1994, Flamingo Horticulture has grown both organically and through strategic acquisition. Flamingo is active in every stage of the supply chain for sustainably produced roses, cut flowers, premium and prepared vegetables. From growing the crops through to processing, marketing and distributing them, Flamingo intimately understands every process. FCI: What do you feel is the biggest strength of Flamingo Horticulture right now?

Martin Hudson: “It’s our vertically integrated agribusiness that provides customers with the highest quality and leading best practices in the supply chain. For more than 25 years, we have built a strong reputation and longstanding commitment based on sustainable and responsible sourcing through an extensive network of strategic partnerships with growers and customers alike.

“Our key strength, which has always been at our heart, is our commitment to Environmental, Social, and Governance (ESG). The work we are doing in the communities, it’s empowering to see the good that we do. But also, it’s the right thing in the sense of sustainable farming and production.

“For example, Tesco valued our longstanding relationship, scale of our own farming infrastructure and farming partnerships, plus our recent investments and expansion in Kenya, also recognising the acquisition in 2017 of Butters Plants now 100 per cent owned by Flamingo. We are suppliers therefore of Flowers & Plants and Fresh Produce.”

Tell us more about the cut flowers and how you supply them?

“Flamingo’s in-house farms are in Kenya, near the scenic Mouth Kenya and Lake Naivasha, and in South Africa near Johannesburg. Our Kenyan farms cover a combined area of 1,856 hectares at a high altitude near the equator, the perfect conditions for growing flowers and vegetables thanks to consistent temperatures and regular rainfall.

“Once the product has grown, it’s a race against time to get it into customers’ hands as quickly and smoothly as possible.

“Flamingo grows and exports over 750 million stems, of which over 30 per cent of the product range is bouquets constructed by our florists in Kenya made up of 25 different types of flowers and straight-line roses. We also do carnations, alstroemeria, matthiola, and a substantial amount of chrysanthemums. Aerial view of a Flamingo Horticulture farm in South Africa.

“We bought a business called Afriflora in Ethiopia in 2018. They are the largest rose nursery producers in the world. The entire greenhouse complex consists of an area of ​​about 450 hectares spread over three locations. This coverage is comparable to 900 football fields.

“We pack at source and fly our freight out for freshness seven days, a week, and 365 days of the year, to the retailers in less than 72 hours. It’s a big challenge, but it’s something that we’ve done for a long time and continue to improve upon.

“We fly products into Liège as this airport is an excellent hub for perishables and we then bring the products to our UK factories by road. We also have substantial business supplying retailers across Europe through Afriflora bv and Omniflora Gmb.

“British flowers are a crucial part of what we do, and we are proud of our relationships with growers here, and they’re an essential part of what the retailers’ proposition is because they like to be selling seasonal British flowers. Outdoor flower crops such as Sweet Williams, Sun Flowers and Gladioli, all crop rotate well with vegetables, assisting sustainable farming. In addition, demand for Peonies continues to rise, and indoor flowers are selling well too.

“The problem is the British weather. It is only sunny for a limited number of days in a year, and therefore, there’s always going to be a strong imported business.”

At the height of the Coronavirus pandemic, how did you deal with the logistical challenges?

“My mantra has always been to control what you can, and don’t worry about the things you can’t control, like the weather, politics or even a virus. Flamingo is built around a ‘can-do culture’. We value our relationships with the freighter services from Nairobi, and many of the passenger planes were still operational even though there were no passengers.

“Personally, it reset how we work as a team. Even my contact with the farms has changed. Whereas before I would have said it’s quite important that I visit them once every three months. Now we meet virtually. It all worked incredibly well during the pandemic.”

Tell us how it all began?

“The business was born out of Homegrown Kenya, the brainchild of Richard Evans (Dicky) in 1982, who supplied speciality vegetables to UK retailers through an intermediary. “I met Dicky, while working for UK Food Group Geest, which you probably now know as Bakkavor. At that time, it was a family business famous for bananas. When I joined in 1979, they had a developing interest in an emerging category of products called ‘exotics’ where I dealt with the weird and wonderful breadfruit, coconuts and even beans in those days.

“I left to form Flamingo UK Ltd in partnership with Dicky in 1994 to specifically manage the direct customer relationships and form the vertically integrated supply chain model with Homegrown Kenya.

“It was a massive leap of faith for me going from corporate culture to pulling up my shirt-sleeves.

“Dicky would bring his sporting pedigree before meeting prospective supermarkets. He would approach these talks like it was an extension of his sporting career. He gave it his all, a real team player.

“Of course, when you grow a business, the big advantage is you get to know people directly, and valuing a business relationship is what’s important to me. I fondly remember introducing our cut flower products to Marks & Spencers. I was talking to Mike Taylor, Head of Foods at the time. He was having a devil of a job to convince the board of M&S that they were going to sell flowers properly. At that time, most department stores had carpets, and the push-back was ‘because of the damage caused by having flowers in buckets of water on the carpets’.

“Roll-on 25 years and these views have changed a lot, and it’s all about customer experience “seeing and smelling”. If you like, UK retailers have taken charge of promoting and selling a simple, self-gratification purchase. We supply branded bouquets from the cheap entry point to top-end bouquets like Autographs in M&S or Tesco’s Finest.

“My most satisfying business moment was when M&S, in its 125th Anniversary Year, recognised our contribution to their success with its ‘Plan A Award’. It’s an award they give to suppliers in recognition of their sustainability and ethical welfare practices.

“Similarly with our suppliers, it’s all about trust. They’re not our farmers, but they’re choosing to market their produce through us, flowers, or vegetables. For example, if they’re 6,500 miles away in Guatemala, they’ve got to trust that Flamingo will sell it well and represent the product well. And so that building of trust, you can’t buy it, you have to earn it, and it takes a bit of time to do. But once you have got it, don’t ever take it for granted; always make sure that trust is the important thing between the farmers and us and that transparency, openness with them. If they don’t trust you, they’re not going to trust you with their product. We have built up that reputation over many, many years.

“Our dedication to values and understanding people has built Flamingo’s global position. For example, in 2000 we bought a business called Flower Plus. I worked out of that site for 18 months, turning it around. I did the same in 2003 when we bought Zwetsloots in Sandy, Bedfordshire. And ditto when we bought Lingarden Bulbs in 2005, I spent a lot of time there to try to understand it and get to know it and I still think that’s quite an important thing to do. A lot of people, from those businesses, are still around working at Flamingo.”

Hypothetically, would you hire yourself as CEO?

“That’s a good question. Yes, I would. In the context of the CEO, everybody has to look back and know that they were fit for that time. It doesn’t necessarily mean that you would be suitable for the next steps. I think you have to recognise that as well. So I think absolutely. In the context of what was needed to bring us from where we were to where we are.

“Dicky was the orchestrator of this whole initiative to form Flamingo, and he and I partnered up in 1994. By 1995, our turnover was £17million. In 2007 we sold the business to Finlays; at a value of £230million worth of revenue – over 13 years, that’s a big journey. Much of that was around acquisitions as well as organic growth and good organic growth.

“At Finlays, our turnover rose to about £330million. Then when we sold to private equity firm Sun Capital Partners in 2015, we were valued at almost £750 million. Indeed, that’s a big journey from humble beginnings.

“In answer to your question, when we sold in 2007, Dicky’s style of management didn’t fit with a corporate environment as Finlays was. So he left, and I took over as CEO. I was the managing director of Europe. He was the CEO of the group, and he had built it up over that period. I stayed with Finlays to run it as CEO. “My successor is brilliant. Giles Turrell is a consumer goods veteran, and he was in the running to become CEO of Premier Foods but pulled out of their selection process to become my successor.

“He thinks like I do about the retail partnerships. He has masses of retail experience; and will ensure that this business goes from strength to strength. We do not tolerate standing still, and he has brought in a new team of people, and that’s bringing newness to the group as well. So this business will easily go from £750million to a billion without any doubt.”

So, are you officially retiring from Flamingo?

“No, not at this stage. I’m a consultant to the board and advising the board as executive director.

“I’ve been swamped, actually on a transaction, which was to sell our integrated pest management business, Dudutech (Kenya), which was a bio-business that we started in 2001.

“The time was right for that business to sell, and we sold it in April this year. For the last nine months, I worked flat out on making that deal with a company called Bioline AgroSciences. They are a leader in that space, and they will be a great owner for Dudutech.

“It’s good for us because as a farmer footprint, we will see the benefits of a more science-based business in that ownership that can bring us new technologies for the future and farming. So it’s a win-win and a good sale. So that’s been keeping me busy. And now, I shall focus on advising the board and staying for as long as they want me.

“I am still the best of friends with Dicky, and he takes counsel from me on various business bits and pieces. He is currently the owner of a Rugby Union team, the Cornish Pirates. They beat Saracens last season.”

This article was first featured in the September 2021 edition of FloraCulture International.