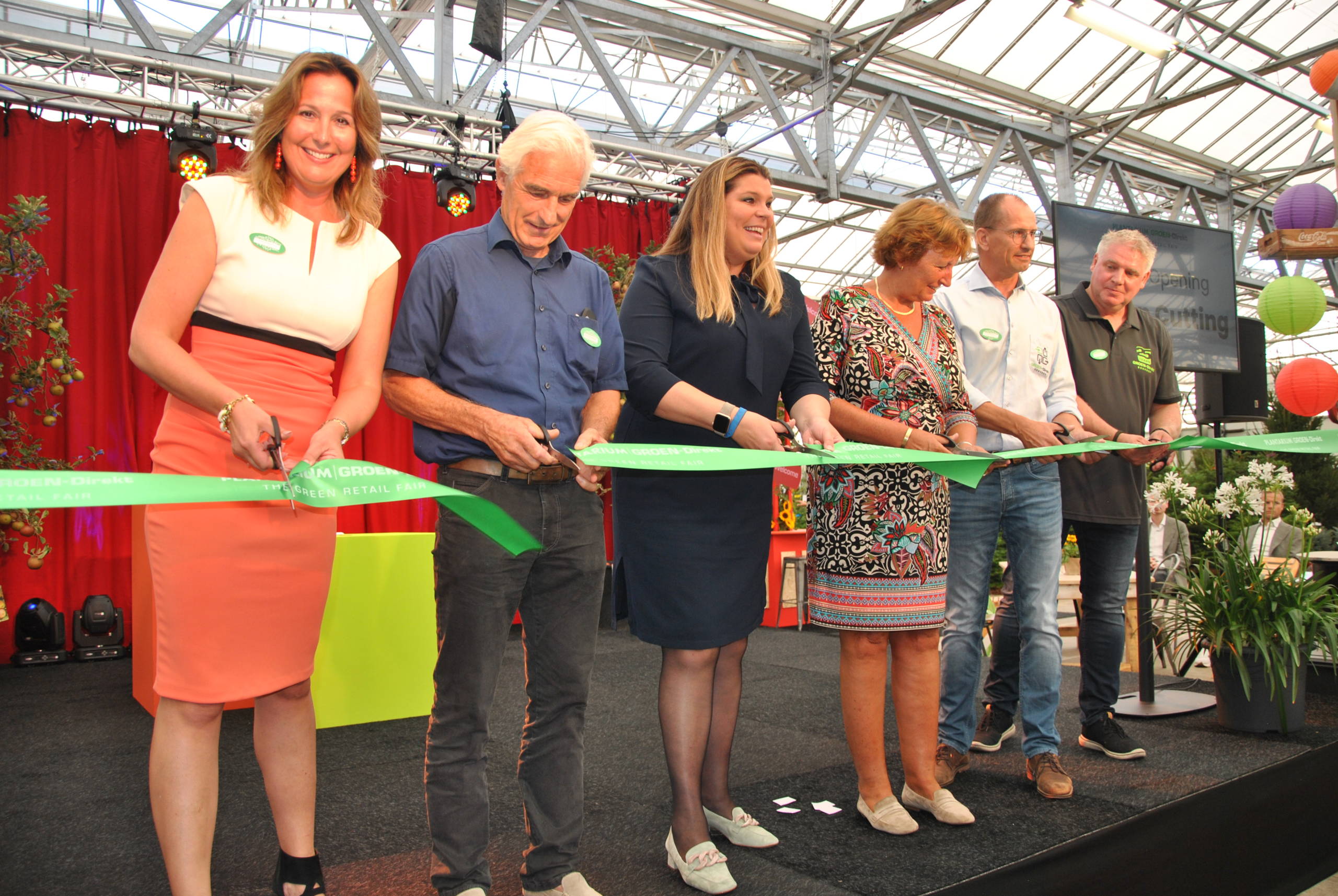 The first edition of the PLANTARIUM|GROEN-Direkt Fair, which took place on 24 and 25 August, was a major success. The AIPH-approved Horticultural Trade Expo was the largest garden plant event in Europe, attracting visitors from all over Europe and far beyond. FloraCulture International Editor Ron van der Ploeg reviews the event in the September edition of the magazine

KVBC’s judging panel highlighted the victorious plant as follows: “Phlox ‘Olympus’ has striking variegated foliage and young red shoots. This Phlox is a welcome new addition to the range, especially with its purple flowers. It’s suitable for use in private gardens and public green spaces.” 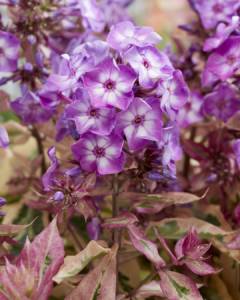 The plant is bred by 55-year-old Peter Geerlings, owner of Geerlings-Meyer BV from Hillegom. It was introduced by royalty management agency/perennial plant intermediary Compass Plants BV and wholesale plant nursery Rijnbeek. The plant was one of 35 outstanding new selections on display at the 2022 Plantarium|Groen-Direkt show, held between 24-25 August at Boskoop’s International Trade Centre. The number of Bronze and Silver Medals awarded was 11 and seven, respectively.

Peter Geerlings was thrilled when Helma van der Louw, chairwoman of Boskoop’s Royal Horticultural Society (KVBC), presented the show’s top accolade to Phlox paniculata ‘Olympus’, a plant he discovered in 2012 as a variegated sport on a seedling whose mother was the non-patented Phlox paniculata ‘Pixie Miracle Grace’, with a Phlox paniculata seedling selection as unknown father/pollen.

Geerlings says he has fallen in love with the award-winning Phlox, and it is easy to see why. The new leaf growth in vibrant shades of red and purple in early spring put on a great show. It continues to shine in late summer as just before flowers unfold themselves, the leaves once again magically change colour. This time, it offers a twist of variegated foliage with green centres and white margins. Geerlings says: “What’s more, the blooms of Olympus are large and equally two-toned. They appear in clusters of delicately fragrant purple flowers with a white centre.”

Launching the new variety – just like Phlox paniculata ‘Cleopatra’, ‘Zenobia’ and ‘Palmyra’ (also bred by Geerlings-Meyer BV) named after ancient gods and mythical homes of the gods – hasn’t been a small undertaking. Geerlings notes, “As ‘Olympus’ is the result of a mutation, it took me six years of trialling to exclude any ‘reverting’ – that is, a return to its natural state. The plant is 100 per cent stable, and we propagate them using soft tip cuttings. We can reproduce true to type over successive generations.”

‘Olympus’ is not the first variegated Phlox. The cultivar ‘Nora Leigh’ has been around for quite a while and Phlox breeders such as Rene van Gaalen from Delft also attempted to launch Phloxes with bi-coloured or tri-coloured foliage. And in ground-covering Phlox procumbens exists a ‘Variegata’ variety.
But nothing compares with Olympus, says Geerlings. “’Nora Leigh’, for example, features bigger blooms and much smaller foliage with much white. And it certainly doesn’t have that tremendous red shade in spring and early summer.”

Phlox paniculate ‘Olympus’ offers no better or worse mildew resistance than most Phlox types. It blooms right into late summer and stands 60-70 cm tall, depending on soil type and climate. 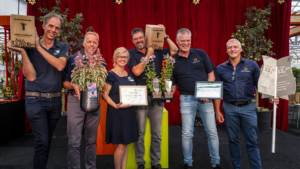 Group photo of the show’s award winners: Rijnbeek and Griffioen.

The KVBC Awards are the beating heart of the AIPH-approved Plantarium|Groen-Direkt show showcasing the best in new plant introductions from plant suppliers.

The trade show is also the place to find the best marketing concept. Griffioen from Boskoop scooped up the Green Concept Award for its Wild & Inheems (Wild & Native) concept.

The jury unanimously voted for Wild & Inheems, “finding everything right about this concept that perfectly meets current market needs”. The concept includes a selection of sustainably grown wild and native plants in pots from recycled plastic. According to the jury, the Wild & Native plants help promote biodiversity in each country, so you can adapt the marketing concept accordingly by incorporating different plants in any European region.

The jury assessed 21 market concepts with Nature2Nature from plant nursery Van Son & Koot from Kaatsheuvel ending second. Nature2Nature includes a range of great pollinator plants in four categories: Birds, Bees, Butterflies and Bugs. The purpose-selected plants – all of which are hardy – come with a specific label depicting the plant and explaining which animals it attracts. The concept comes with a full range of (POP) Point of Purchase material.

Nature4Nature is for any market segment: physical garden centres, DIY stores, and online plant delivery services. The concept is one of the answers to today’s eco-conscious shoppers. Van Son & Koot has an ambitious plan with Nature4Nature as it seeks “to inspire everyone and make the world greener”.

The jury report reads: “The concept evolves around appealing storytelling, using a subdivision in four categories. The concept is fun for children and very topical, responding to the need for sustainability and biodiversity. And it impacts the way of gardening positively.” 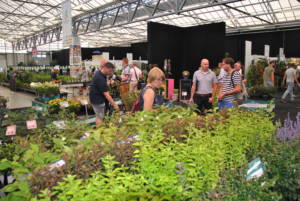 During the opening ceremony early Wednesday morning, 24 August, organisers bent over backwards to explain that the 2022 Plantarium|Groen-Direkt edition is a brand-new show, marking a new dawn for the international nursery stock industry. Perhaps a ‘rebrand’ rather than a ‘first’ as all industry professionals know that Plantarium and Groen-Direkt were events already held under one roof.

The bottom line is that in February 2022, Jan de Vries, and Michiel Gerritsen of Stichting Vakbeurs voor de Boomkwekerij (SVB) and Taaf Rosbergen and Hans Cok of Groen-Direkt put their signatures to the agreement by which a new show organiser was formed: Green Retail Events tasked with Plantarium|Groen-Direkt as their first trade show.

Once again, the term ‘new’ in show organiser’ is not absolute as the newly appointed organising committee includes six seasoned nursery stock experts.
Plantarium and Groen-Direkt combined aim is to provide a spring and autumn trade show where growers locally and abroad can gather to showcase garden plants and share knowledge, best practices, new ideas and techniques so that horticulture never stands still. 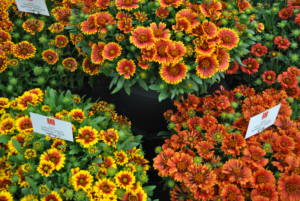 AIPH Secretary General Tim Briercliffe commented: “AIPH is pleased to have granted its approval to Plantarium |Groen-Direkt. The exhibition will provide a unique opportunity to see the new plants being introduced worldwide and to re-connect with producers and suppliers.”

The total surface area of the fair was 22,500m², and 214 exhibitors from four continents participated. The green sector’s leading plant nurseries joined suppliers, alongside a selection of hardware suppliers for garden centres. Visitors found thousands of products in all shapes and sizes on display and plenty of opportunities to place orders directly at Groen-Direkt’s Autumn Fair. 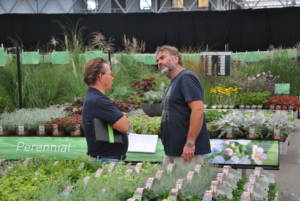 The plants on sale at Groen-Direkt are grown by 384 growers, of which 30 to 40 per cent is from the Boskoop area.

This review first appeared in the September 2022 edition of FloraCulture International.