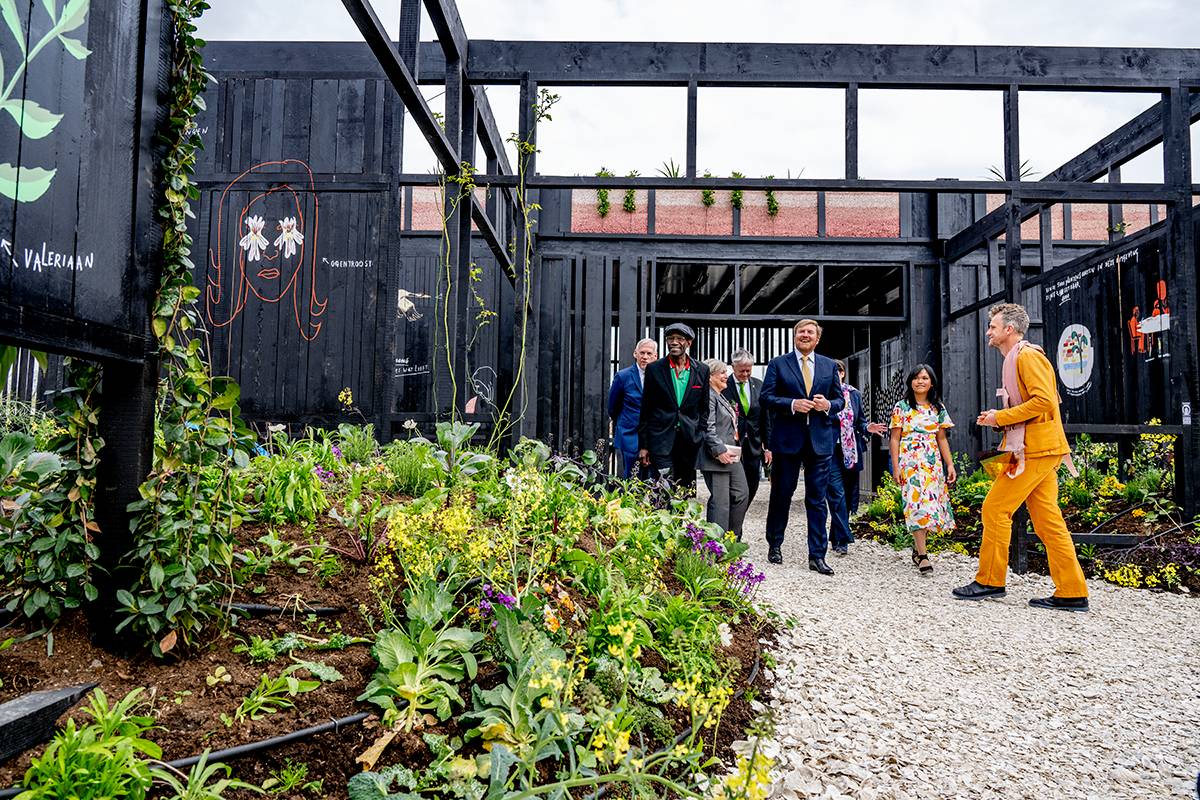 Dutch King and guests witness the importance of ornamental horticulture to help create an urban future with nature at the opening ceremony of Expo 2022 Floriade Almere-Amsterdam.

The International Association of Horticultural Producers (AIPH) attended the opening of Expo 2022 Floriade Almere-Amsterdam, the Netherlands, on 13 April. For the next six months until 9 October, this AIPH Approved World Horticultural Exhibition will demonstrate the theme of Growing Green Cities. 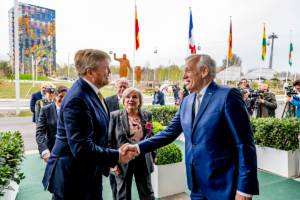 His Majesty King Willem-Alexander was guest of honour at the formal opening.

Mr Werner Schouten, a sustainability expert and the opening ceremony presenter, began introducing the Floriade theme referencing the urgency to address climate change with bold actions.
Addressing the audience of dignitaries, the acting Mayor of Almere, Mrs Ank Bijleveld-Schouten, talked further about how this seventh edition of Floriade will demonstrate solutions to the world’s biggest problems with its four concepts: greening the city, feeding the city, healthying the city, and energising the city.

Praising the people involved and reinforcing the importance of the educational purpose of Floriade for greening city developments was the Commissioner General Floriade Expo 2022, Mrs Annemarie Jorritsma. She gave an insight into why getting approval from AIPH in 2014 for the Floriade was important, “By 2050, 68% of global population will live in cities, this was the reason through the horticultural sector we wanted to make a serious effort to provide greener and healthier solutions for the next generation.”

Floriade is the brand name for this A1 Category World Horticultural Expo, which has occurred in the Netherlands every ten years since the first AIPH-approved Expo in Rotterdam in 1960.
The opening ceremony also highlighted the importance of Floriade to make greener changes for the world, with the address from the Dutch Minister of Agriculture, Nature, and Food Quality, Mr Henk Staghouwer. He says, “Dear children, dear students this is my message to you we need your dreams and optimism. This Floriade shows optimism is allowed with the projects and solutions exhibiting how people can produce with nature and not at its cost.”

The Secretary General of the Bureau International des Expositions (BIE), Mr Dimitri Kerkentzes, echoes this call to the youth to get involved today at Floriade for a greener tomorrow and an urban future shaped by nature.

Mr Schouten warmly acknowledged that there would be no Floriade without horticultural producers. He then introduced a video presentation highlighting the importance of the global ornamental horticulture industry for producing trees and plants to “turn grey cities to green ones”. It was presented by AIPH President Mr Bernard Oosterom and Chairman of De Nederlandse Tuinbouwraad (Dutch Horticultural Council) Mr Kees van Rooij. 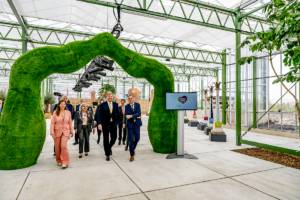 Mr Oosterom had the honour of presenting His Majesty with a mini apple tree grown by Kwekerij Fleuren in Baarlo. He says, “This tree won’t get much taller than me and you can grow it in a pot or in the ground. Our wonderful industry is full of innovations like this and every one will help to prepare our next generation for a future closer to nature in greener cities.”

Expo 2022 Floriade spans 62 hectares (153 acres), and it sits four metres below sea level on land reclaimed from Ijsselmeer Lake. Almere is one of the biggest cities in the Netherlands. Currently, 215,000 people are living in the city. Predictions are that the city will expand to 300,000 residents in the next decade. There are also plans to expand further to house 400,000 residents, which means it will be one of the top five cities in the Netherlands.

Located in the Flevoland Polder, Almere was created to supply housing for the urban expansion of Amsterdam and the Randstad area in the 1970s, without the need for existing cities to expand. The goal was to preserve the “Green Heart”, a large green and natural area within the Randstad circle. You can read more in an AIPH Green City case study here.

Dutch architect Winy Maas deserves the credit for the Floriade site’s comprehensive and ‘systemic’ design using a square 800 by 800 metres grid and placing it on top of existing features such as woodland, water, an island and a highway. It provides a geometric regularity that visitors will easily understand and navigate around. 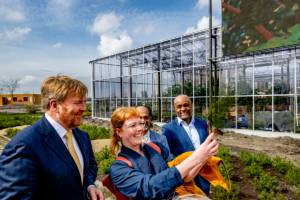 Famed Dutch landscape designer Niek Roozen put his signature upon a bold planting scheme with the Green City Arboretum as a shining example of the city’s green development. Once Floriade finishes in October, the Green City Arboretum will become part of Almere’s newest residential area, Hortus. Alongside this legacy will be a 14-storey residential tower block Flores, Aeres University of applied sciences, Flevoland Campus Food Forum and a care home.

The King’s Commissioner of the province of Flevoland, Mr Leen Verbeek, says Almere has achieved an outstanding achievement against the odds of a global pandemic. He says, “Although it has not always gone smoothly, there are always bumps, this is an achievement. We see people here with perseverance with a pioneering spirit. I am proud of that.”

The landscape architecture, gardens, flowers, and plants are the primary motivation for visiting Floriade. The park, gardens, and exhibitions represent the Expo’s objectives, themes, and concepts. The 33 international pavilions result from diplomatic negotiations from national and regional government members that have taken more than three years to secure participation. No easy task, especially during a global pandemic.

His Majesty took a tour of the World Horticultural Exhibition after the formal opening ceremony. He saw the international, national, and commercial installations in the park and greeted the Commissioners. He also walked the boardwalk in the Green House, which has 10,000m2 floor space, to look at the horticultural displays from across the globe. 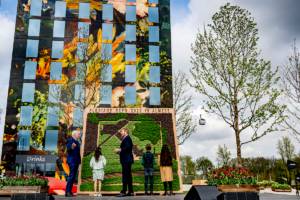 The Almere Youth Symphony Orchestra played a piece from Antonín Dvořák’s ninth symphony, From The New World. While His Majesty, together with three young people, planted cress plants supplied by Koppert Cress B.V. into a living image of the Floriade 2022 map.

After Floriade CEO Hans Bakker declared the Expo open, His Majesty was driven through the grounds in a golf cart buggy and briefly spoke with the gardeners who had laid out the greenery on the Floriade. The afternoon concluded with His Majesty riding on the 850-metre cable car that runs from Utopia Island to the terminus on the other side of the A6 highway.

The World Horticultural Exhibition opens to the public on 14 April. Two million guests are expected. The Floriade lasts until 9 October.

Watch the opening highlights below.