Epic drama in iconic landscape but Italian growers fight back 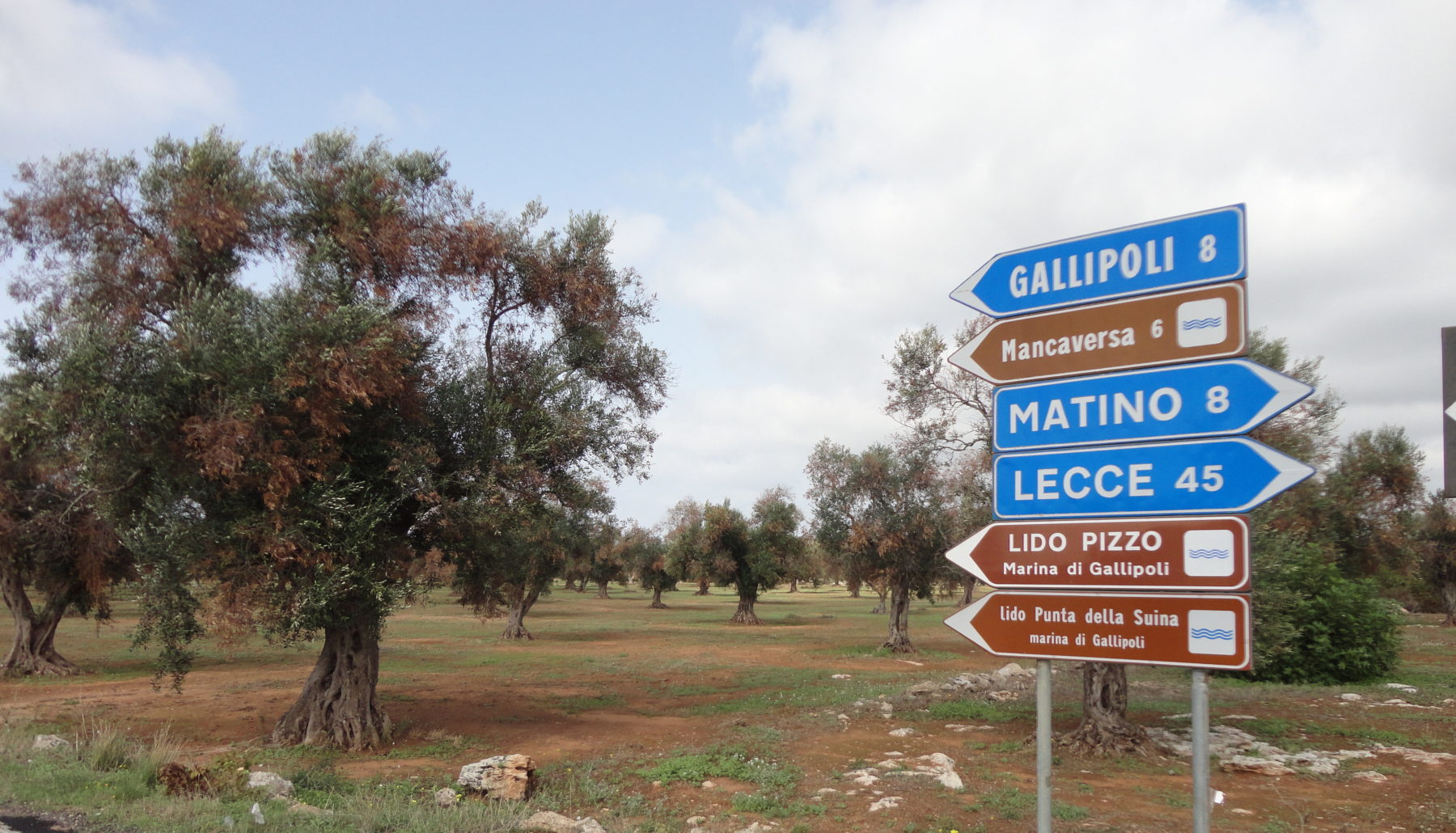 PADUA, Italy: A Xylella fastidiosa conference at Flormart aimed at distinguishing fact from fiction and providing a solid, scientific overview.

The looming specter of Xylella fastidiosa first emerged near Gallipoli in the Apulia region of southern Italy. It was October 2013 and initially little attention was paid to some scattered olive trees looking droopy and fatigued with leaves turning brown. But then entire groves started to show symptoms ranging from leaf scorch to eventual dieback and death.

Leonardo Capitanio,  an ornamental plant grower in Monopoli and President of ANVE, the National Association of Nursery Stock Exporters, can’t recall where he was that day in 2013 when the Italian National Research Centre Council (CNR) institute confirmed a case of Xylella fastidiosa had been discovered in the province of Lecce. What he does remember is how a mix of emotions and anxiety gradually engulfed the entire agricultural sector. “At first, they only talked about olive trees. But soon attention shifted to the range of host plants which included a sizeable number of ornamental plants and wildflowers. Subsequently, scientists distinguished sub species of Xylella fastidiosa and their distribution and host range and this included plants that are not susceptible to the pauca sub species found in Apulia. It is expected that the EU will prohibit the movement of these plants from the demarcated area, too.”

Xylella fastidiosa was first described one hundred years ago as a pathogen causing leaf scorch on grape vines in California. In Europe, however, little was known about Xylella fastidiosa until 2013. It is thought to have arrived in Europe via imported plants. Currently, the bacteria is linked to disease in a range of host plants in the Mediterranean areas of France, Italy and Spain and has been spotted on coffee plants imported from Central and South America.

To date the European Commission has identified and listed over 300 plant species in 63 families as known hosts of Xylella fastidiosa in the world. In his conference presentation plant biologist at the Italian National Research Council (CNR), dottore Boscia goes even further by stating that the European Food Safety Authority mentions 563 plant species in its most recent host plant data base.

Xylella fastidiosa is a Gram-negative bacteria that doesn’t produce spores (asporigeno). It is a quarantine organism and lives in the xylem tissue where it is believed to form a kind of biofilm and balloon-like outgrowths causing water movement to obstruct. Symptoms vary greatly depending on the host plant’s species and its degree of susceptibility. They include leaf browning, marginal leaf scorch, wilting of foliage and crisped branches.

The disease can be transmitted by insects from the Cicadellidae and Cercopidae families feeding from the plant’s xylem. In Europe the spittle bug (Philaenus spumarius) has been confirmed as the main vector of the disease. These crave the company of other insects like themselves, travelling in large groups. They sometimes reside in  flocks of hundreds on one single plant. No cases of infection via tools or hands have been reported yet.

Capitanio says it feels the whole business is under attack, leading to a flood of fake news. “Jobs and businesses are at stake while, on the other hand, there is much discussion as there is an emotional attachment to the trees. The bitter reality is that this disease couldn’t have found a better place to develop: an area densely planted with host plants – olives and vector insects that are basically everywhere.”

Olive trees are intrinsically linked to the Apulian landscape, anchored in local traditions and culture. “And eradication of trees naturally leads to an eruption of public protest. What made things worse was that the emotional debate was fuelled by all kinds of conspiracy theories. Rumour had it that the bacteria had been introduced on purpose to increase pesticide sales. Another version was that all this was introduced to accelerate the uprooting of trees allowing for the quick construction of a portion of the Trans Adriatic Pipeline,” explained Capitanio.

Unfortunately this is the era where a ‘Say no to the eradication of olives’ call on social media by a famous person has far more impact than a scientifically- based, technical seminar by the Ministry.

Xylella fastidiosa is a quarantine organism for which the EU has emergency control measures in place. Capitanio: “The authorities immediately announced control procedures but the seemingly endless attacks in the media and fake news slowed things down. In the meantime, this caused economic losses not only to the olive growers but also to ornamental plant growers inside and even outside the demarcated areas as international customers doubted the efficiency of the risk management approach and preferred, in some cases, not to buy their plants in Italy.”

These type of fears are unjustified says Capitanio and he cannot repeat it enough: “To date, not one single outbreak of Xylella fastidiosa has been reported in Apulia’s nursery stock sector and the disease has been limited so far only to olive groves. And this says a lot about the strict hygienic conditions at our plant nurseries and the professionalism of our growers. In a professionally run plant nursery, vector insects and bacteria are not present. Our customers don’t need to panic. Ornamental plants from Apulian and Italy at large are perfectly safe and healthy.”

As there is no cure or treatment available for Xylella fastidiosa affected growers were simply told to uproot and burn their trees. It soon became clear that the attempts for eradication were fruitless. If it was only for the many private properties dotted with secular olive trees and whose owners could impossibly be traced and ordered to uproot their trees. What followed was a programme of ‘contentimento’, the establishment of demarcated areas, consisting of an infected zone, containment zone and a buffer zone.

In the autumn of 2013, this demarcated area was 8,000 ha whereas in 2018 is expanded into 775,000 ha. It is questionable whether the spread could have been slowed down but it is safe to say that red tape, miscommunication and the lack of a proactive approach did not help matters. “The outbreak of Xylella fastidiosa in Puglia is a perfect example of how not to handle a killer plant disease”, said Sabrina Diamanti from the Italy’s National Council of Agronomists and Forestry, adding that “I sincerely wish that with help and support scientific solutions can be found in the near future.”

In Italy, the bacteria jeopardises above all Apulia’s signature olive industry which makes a considerable contribution to the state’s economy. Statistics reveal that the region’s olive growers produce 40% of Italy’s total olive oil, while Italy as a whole accounts for 15% of the world’s virgin oil. The total area dedicated to olive oil production in Apulia is 400,000 ha, which equals to 200,000 tons in 2017 (price €3/kg). The sector represents a value of 600 million euros in 2017. Crop losses due to Xylella fastidiosa have a direct impact on producers, consumers and the national economy. Estimated economic losses since 2013: one billion euros.

As for losses in Apulia’s ornamental plant sector, Capitanio says that there is no official data but rough estimates predict that over the next few years losses in larger demarcated areas will cost over 1 billion euros.

It might be too early to speak about real solutions, but it’s definitely not all doom and gloom. As previously mentioned mechanical weeders in springtime can significantly help reduce  vector populations. Moreover, scientists and breeders are working tirelessly to create Xylella fastidiosa-tolerant cultivars. Initial results are promising with the time-tested Leccino cultivar and the FS-17 (Favolosa) cultivar proving to be particularly resilient to Xylella attacks.