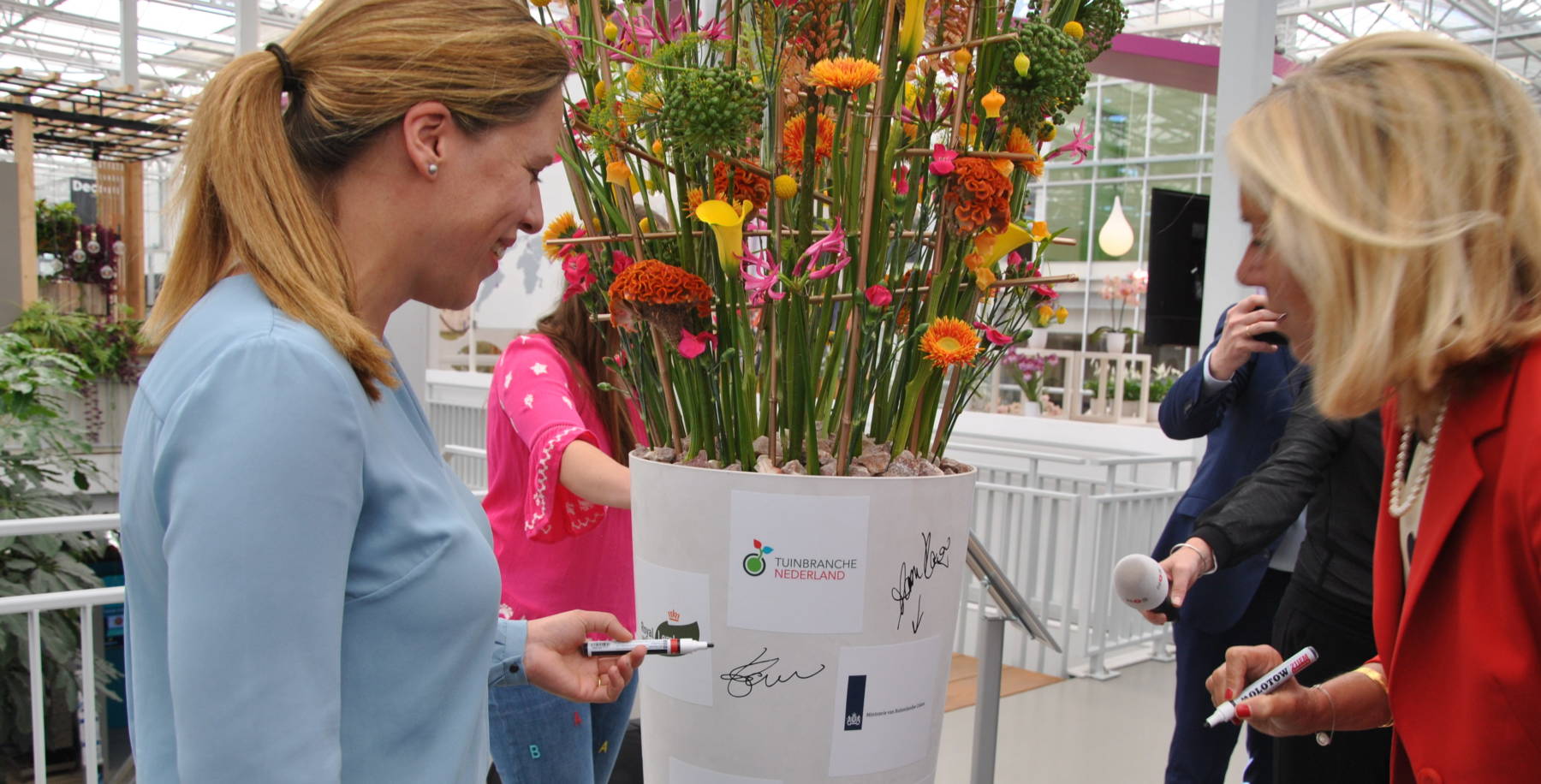 The IRBC agreement, which in Dutch translates as IMVO (Internationaal Maatschappelijk Verantwoord Ondernemen), involves partnerships between businesses, government, unions and NGOs. Together, these partners work to prevent such abuses as exploitation, animal suffering and environmental damage.

Driving force behind the Agreement is the SER, the Social and Economic Council of the Netherlands, an advisory board for the Dutch government in which employers, employees and independent experts work together to reach agreement on key social and economic issues.

One of the forerunners of the IRBC agreement for the floriculture sector is the Floriculture Sustainability Initiative (FSI) that has promised that 90% of the world’s flowers and plants will be responsibly grown and traded by 2020.

In signing the agreement at the World Horti Center in Naaldwijk today, the flower industry joins the garments and textile, banking and sustainable forest sectors which already have inked IRBC agreements.

Ms Sigrid Kaag and Ms Carla Schouten (right to left), Minister for Foreign Trade and Development Cooperation and Minister of Agriculture, Nature and Food Quality respectively, signed the agreement on behalf of the Dutch government. It was signed on behalf of the sector by individual companies, Royal FloraHolland and sector bodies.

Its first task will be to identify social and environmental risks at sector and company level. Assistance will be provided by the government, the trade union and the NGO. In the first year, projects will be started concerning living wage and the impact of crop protection products on people and the environment.

The scope of the agreement covers the chains for the breeding and production of flower bulbs, parent material, cut flowers, cut foliage, trees and pot and bedding plants. The Netherlands is a major hub in the international floricultural trade. The Netherlands exports flowers and plants worldwide to the tune of EUR 6 billion and imports flowers worth over EUR 600 million from Africa and over EUR 100 million from South America. The main import countries are Kenya, Ethiopia, Ecuador and Colombia. Approximately 600 Dutch trading companies operate internationally.

The agreement was drawn up after a period of intensive consultation under the auspices of the SER, which stresses that companies must endeavour to achieve international responsible business conduct and sustainable supply chain management. “This is what society and the government expect. It is also laid down in international guidelines and obligations such as the United Nations Guiding Principles on Business and Human Rights, the Guidelines for Multinational Enterprises issued by the Organisation for Economic Cooperation and Development (OECD) and the core labour standards of the International Labour Organization (ILO). In the Netherlands, IRBC Agreements to this effect have now been made in 10 sectors,” according to SER.

The IRBC Agreement for the Floricultural Sector is signed by:

With the support of: