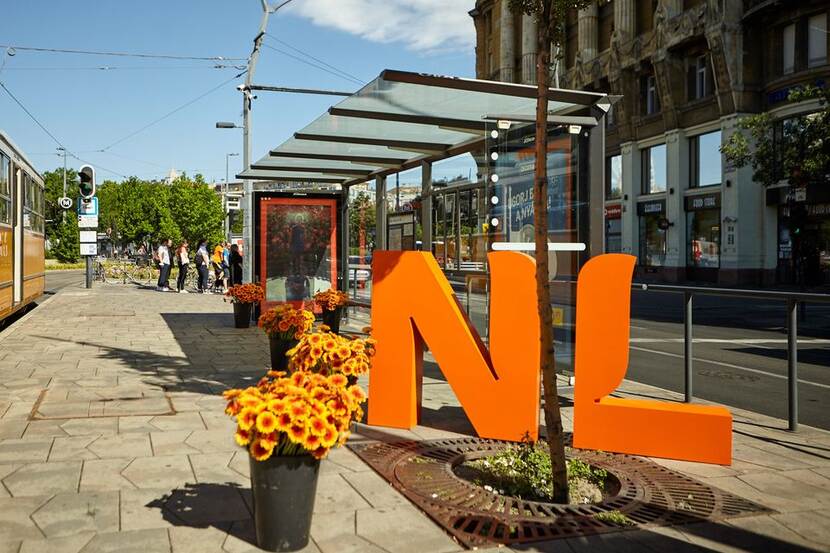 BUDAPEST, Hungary: Agroberichten, the newsletter of the network of Dutch agricultural counsellors worldwide, reports on The Garden of Delight. A visual arts exhibition is bringing the iconic Dutch flowers to the busy tram stops of the Hungarian capital.

The Garden of Delight is part of a citywide campaign, led by the Netherlands Embassy in Hungary. Opening the exhibition at Deák tér in central Budapest on Thursday 15 July was René van Hell, the Ambassador of the Netherlands to Hungary, accompanied by Gábor Kerpel-Fronius, the Deputy Mayor of Budapest and Tibor Bolla, CEO of BKV Zrt., Budapest’s public transport company.

The Dutch Ambassador and his team presented passers-by with an orange gerbera to mark the occasion as as token of Dutch-Hungarian friendship.

The art project includes 25 Citylight posters depicting floral-themed works by Dutch artists and photographers placed in the shelters of one of Budapest’s most frequented tram routes, lines 47-49.

The exhibition feels like  ‘an imaginary garden walk’ – in each tram stop, a different picture is installed and commuters can tour the Garden of Delight while riding Budapest’s iconic yellow tram. The Citylight posters also include QR codes so that commuters waiting at the stops can visit the exhibition’s website and find out more about the photos and the artists.