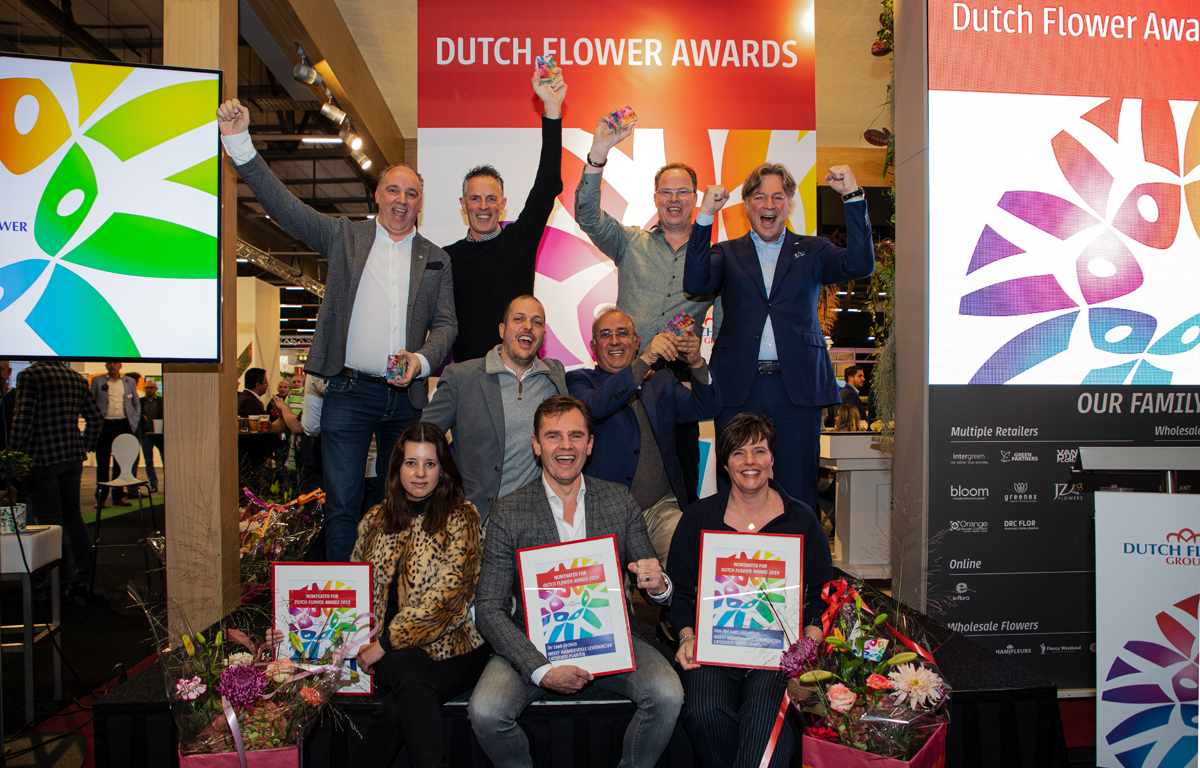 Nine cut flower and ornamental plant growers battled it out to win DFG’s prestigious Dutch Flower Award, which identifies successful and growing companies. Now in its 18th year, the prestigious accolade recognises hard working, outstanding  horticultural entrepreneurs who demonstrate excellence and extraordinary success in such areas as innovation, product quality, supply chain management and commitment to sustainability efforts. All candidates are suppliers with whom the Dutch Flower Group has a tried and tested relationship.

In the category Cut Flowers, the winner was Lisianthus grower Van der Lugt Lisianthus from ‘s –Gravenzande (600,000 stems per week growing both double flowered Rosita and single flowered Piccolo) while in the Ornamental Plant category, the award went to Ter Laak Orchids, a renowned orchid grower from Wateringen (8 million potted Phalaenopsis per year). Colombian-based Flores Silvestres scooped up the award in the category International Grower.

Winning the Preferred Partner Award was Hans van der Meulen, who is affiliated with organisations such as Beeckesteijn Business School. Van der Meulen has been leading internal Marketing & Sales programmes at DFG companies for a number of years.

DFG’s Preferred Partner Award was created in 2015 in addition to the Dutch Flower Awards. It recognises supply chain partners for the dedication and forward-looking perspective they use in working together with DFG.

In his speech, DFG CEO Marco van Zijverden said that sustainable relationships, the theme of this year’s Dutch Flower Awards, are the foundation for tackling the many challenges which lie ahead. He also mentioned geopolitical developments such as Brexit and increasing cost pressures.

year ahead, DFG plans to further extend its digitalisation and sustainability programmes, while strengthening its international market position. The latter will be achieved by intensifying customer relationships, forging closer cooperation with growers and expanding into new markets.

The Dutch Flower Group (DFG) is a globally acting group of  30 trading companies. Together they lead the import, export, trade and market development of cut flowers, bouquets, cut foliage and plants. They supply to both specialist traders (florists) via wholesalers and multiple retailers (supermarkets, DIY stores and garden centres). Together with its 2.500 employees, Dutch Flower Group achieved a turnover of € 1.5 billion in 2017, exporting to 60 countries worldwide.