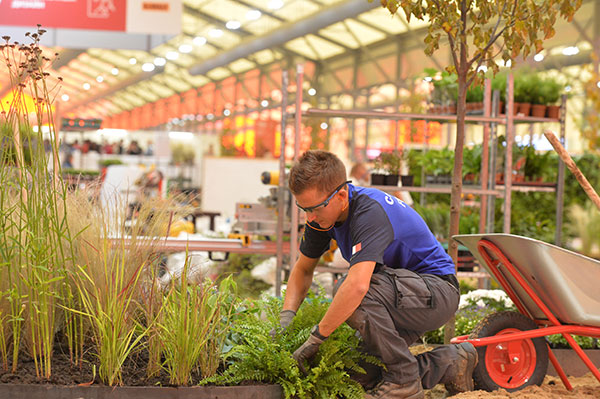 VAL’HOR, the umbrella organisation for ornamental horticulture in France,  (regrouping all trade unions from the ornamental sector, from growers to retailers, landscapers and florists), announces its presence at the Salon International d’Agriculture (SIA), hosting in Paris Expo Porte de Versailles from 22 February until 1 March.

VAL’HOR is taking an impressive 350m2 exhibition space, which is approximately the total area size of an IMAX movie theatre screen. Sharing this space will be VAL’HOR’s sister industry bodies FFAF (French Federation of Craftsmen Florists) and Unep (landscape businesses and partnership). Adjacent to this massive platform will be the Super Jobs stand, bringing awareness for jobseekers about career opportunities within the industry.

Mikaël Mercier, grower of acidophilic plants in Guiclan (Brittany) and President VAL’HOR recently waved the Drapeau Tricolore at IPM Essen, as this year, France was the event’s partner country. In meeting with industry professionals from around the world, he brought forward the diversity, uniqueness and significance of the French sector. Yet, he also mentioned how horticultural entrepreneurs struggle to fill job vacancies.

Mercier says, “Skills shortages appear to be widespread, affecting production, floral wholesale, landscape design and landscape maintenance workers. There’s a lack of knowledge about a career in horticulture and skills needed even when it comes to jobs people are familiar with such as florists. Yet, there is a growing awareness of the multiple benefits of plants, flowers and green infrastructure in daily life. A recent survey by Odoxa for Challenges and Aviva, 11 per cent of the French people would like to be florist, gardener or landscaper. It’s important to highlight the sector’s many job opportunities. Luckily, people are increasingly concerned about climate change and understanding the role plants and themselves can play in the fight against global warming.”

Founded in 1998, VAL’HOR is an inter-professional organisation of 53,000 companies (generating a combined turnover of €11 billion and creating 160,000 jobs), 160 volunteers, three horticultural schools and ten industry associations representing the ornamental horticulture industry in France

VAL’HOR, collaborating with the industry body for French floristry FFAF and the professional organisation of landscape contractors, Unep, will join forces in their stand (hall 2.2 D048) to promote a career in ornamental horticulture and to highlight the life-enhancing benefits of nature. Mercier says, “Professionals currently working within the industry will be happy to tell you how they got started in horticulture and why they love it so much. During SIA’s opening weekend nine young florists will battle it out during a national floristry championship while the second-weekend SIA will host the Worldskills France Landscaping competition.”

Mercier stresses that floristry and landscaping are vital parts of France’s ornamentals industry. “Currently, the sectors employ 14,100 florists, 29,550 landscape contractors and 2,800 landscape designers. Meanwhile, the number of florists declined by 7.6 per cent between 2013 and 2015.”

A few decades ago, running a flower shop may not have been as challenging as is in these days, with fierce competition from supermarkets and online suppliers. However, Mercier holds a strong belief in physical flower shops. “They remain essential in the French consumer’s perception. Nowadays, consumers look for customer experiences in the stores.”

Mercier acknowledges a strong floristry and landscaping sector requires backing from the government. He says that in terms of unnecessary and burdensome regulations VAL’HOR , FFAF and Unep combine to take a leadership role in protecting and promoting companies’ business interests, including new and future regulations.  The industry agrees with these new regulations, but we need to establish the applications of these new measures in each company. We have to inform the industry of the new rules and regulations the companies will have to follow.”

Commenting on the impact of sustainability laws and regulations (plastics pact, certified eco flowers) on SME businesses such as florists and landscapers, Mercier says the three industry bodies established a working group to address sustainability issues such as the use of plastics.

“We must meet the expectations of the citizens by finding the right response, not only for the environment but also for our companies, big and small.”

Finally, does Mercier have any top tips for wannabe florists and landscapers? “Always remember flowers, plants, trees and gardens are not just beautiful things, they are also things that help our mental and physical wellness, a way to support biodiversity, to fight against bees decline or to decrease temperature and pollution. An ‘interactive tree’ in SIA stand will explain to visitors that a tree has a better cooling effect than a parasol and which plants will attract bees.”