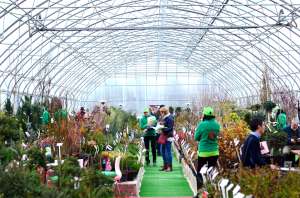 Ciepłucha specialise in container-grown acid-loving plants such as Rhododendrons, blueberries and conifers, which are produced in cells or small pots for wholesale growers to grow-on into finished plants. They also grow a large number of finished plants which are sold through their own garden centre and to other garden retailers. Its production currently stands in excess of 1,200,000 Rhododendrons and the same number of blueberries.

Ciepłucha is also known for being the organiser of an annual 3-day event for wholesalers, bringing together an exciting and comprehensive collection of shrubs, perennials and trees. This 5,000m 2 ‘Showroom for Nursery Stock’ event takes places in November/December in Konstantynów Łódzki and goes from strength to strength with over 10 participating nurseries last year.

The nursery  supplies over 100 varieties of Rhododendron with the Finnish Collection occupying pride of place. This includes a range of cold-hardy varieties (resisting temperatures of -26°C to -32 °C), created by breeder Kristian Theqvist from Finland.

Stealing the show at IPM Essen was the new ‘Becca’ (‘Helsinki University’ x ‘Blue Bell’) which resists temperatures as low as -30°C. Its flowers are pink with a ray of green-brownish spots. Featuring an open plant habit, it doesn’t grow particularly fast, reaching approximately 120 cm in ten years. Becca’s leaves belong in the brachycarpum category as they are large, shiny and lush green.

Another addition was ‘Eija’ (‘Elviira’ x ‘Blue Bell’) which bears masses of two-toned flowers with purple-pink edging and light brown spots. Leaves are lanceolate and dark green while its growth habit is compact (120 cm in ten years). ‘Eija’ flowers midseason and resists temperatures as low as -26 °C.

‘Kristian’s Pink’ (R. brachycarpum var. tigerstedtii x hybr.) is a variety that stands out for its dark brown/reddish buds that unfold themselves to reveal pink-purple flowers. Blooms can be enjoyed for a relatively long time as they are sterile. Leaves are lanceolate and dark green. It’s a slow growing variety, standing 60 cm tall after ten years. Flowers appear midseason. It thrives better in shady spots due to the risk of necrosis of leaf edges and is frost resistant to -32°C.

The company’s own breeding programme resulted in the Rodo Kiss Collection including three varieties in bold colours. ‘Double Kiss’ PBR (Haaga x Mars) is a variety that has semi-full, deep dark pink flowers which contrast nicely against its dark green, oblong foliage. Its growth habit is upward and it reaches 150 cm in ten years. It has high frost resistance, down to -30°C.

Revealing its flowers in June, ‘Late Kiss’ (Mrs Anthony Waterer x Artmeyer’s Späte) is a very late blooming variety. Buds are light green, large and lofty. It has large, pink flowers, with yellow-brown spots. Its growth is dense and in an upright habit. After 10 years it stands 150 cm tall. ‘Late Kiss’ is frost resistant down to -24°C.

‘Neon Kiss’ PBR (Haaga x Brisanz) is a hardy variety featuring flowers in neon red. It stands out with its attractive, dense form and dark green leaves. It grows medium-strong and reaches a height of 120 cm in ten years. Frost resistant down to -28°C.