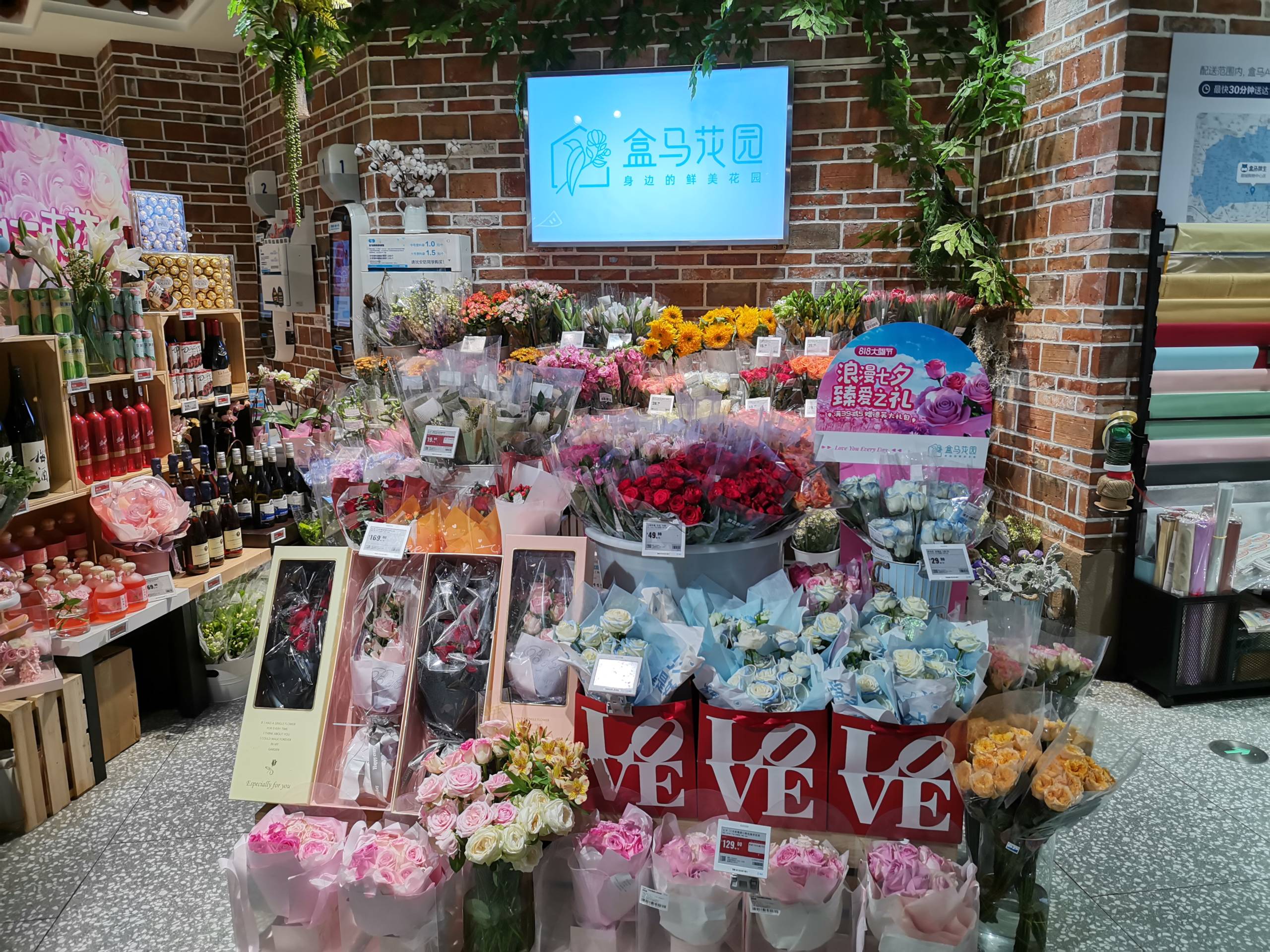 Ms Na Yu from Huazhi Flowers is a core supplier of cut flowers to Chinese retailer Freshippo. In an exclusive interview, she talks to FCI about the floral mass market in China today.

Another shining example of fascinating new developments in China’s retail is Freshippo.

Freshippo is a supermarket chain that also blends the online and offline experience. The digitally-enabled food store offers customers a high tech shopping by app experience combined with physical stores on the high street.

With each store functioning as both shop and fulfilment centre, Freshippo delivers online orders within a distance of a 3km radius or a minimum travel time of 30 minutes.

Freshippo’s strong physical store infrastructure paved the way for flower and plant categories in 2019 and this floral offering for consumers is currently among its fastest-growing sales departments.

China’s fast rebound from Covid-19 has been unique. And it is interesting to see how post-Covid, almost all major Chinese supermarkets are stepping into the floral markets. Even some corner supermarkets are venturing into flower sales.

However, buying flowers from supermarkets is still a relatively new experience for Chinese consumers.

Ms Na Yu is a pioneer supplier to the Chinese supermarkets, establishing her business in 2019. Yu was originally working for the Yunnan government, focusing on improving the national flower sector. Later on, she worked for the Kunming International Flower Auction Exchange Centre as a general manager assistant. Selling flowers in Chinese supermarkets was budding in her mind, she says, since 2008, but it was not until 2018 that it became a reality.

Quitting her government job to become her own boss at the end of 2017, Yu saw the business opportunities in the Chinese flower industry, direct to supermarket shelves.

It was at the same time Freshippo decided to expand its territory to include flowers and plants. Thus the collaboration started.

FCI: How did you start to supply the retail sector?

Na Yu: “In 2008, I was working for the Yunnan government. During this period, we had many opportunities to see what was happening overseas, and especially the study of the retail flower supply in Europe left me with a great impression. Supermarket flowers are affordable, and the quality is better than flowers used as gift flowers in China. More importantly, it is targeted at daily home use. Back then, flowers were mainly for special occasions, and there was almost no home consumption. Flowers wilted within two to three days, and demand for better quality from Chinese consumers did not exist.

“Since coming back from the overseas study trip, I have been working to improve the domestic flower quality. I sense that the demand for high-quality flowers will be the future. However, at that time, not many growers cared about growing high-quality flowers for the domestic market because consumers are not ready to pay for quality. In comparison to the dominance of supermarkets selling flowers in developed countries, I believe China’s supermarket flower supply would soon hold enormous potential for the future. Just look at Alibaba.

“With this in mind, rather than wait for the opportunity, I decided to start taking on the floral project challenge myself and run my own business. Since 2019 Huazhi Flowers has been introducing flowers to supermarket consumers.”

How is the profit margin supplying the retail market?

“Very thin. Approximately 80 per cent of Freshippo’s management team is originally from Walmart, Carrefour and Sam’s Club. The management strategies are similar, to the traditional supermarket players.”

How is the supermarket positioning its flower business? How important is it to the overall retail business?

“It is a very important part of the business. When we look at the big picture, the demand for flowers and plants for home consumption is soaring in China. Unlike the weekly flower subscription, where consumers do not know what will be delivered, buying directly from a supermarket is instantaneous.

“For supermarkets with an existing well-established supply chain, adding flowers and plants is not a challenge, and moreover, it can benefit from such infrastructure, and the marginal cost is low. Freshippo is seeing the potential of flowers being the same value or even higher GMV than vegetables.”

Is it common for big brand supermarket chains to sell flowers in China now? How big do you predict the retail market will become in five or ten years?

“Many projects are on the way, Costco, Lawson, Freshippo, Sungiven Foods and many more. Based on what we know, almost all supermarkets are considering adding flowers into the product range. As an empty area in the majority of Chinese supermarkets, it is a breakthrough. I can’t say for others, but according to our market research, we expect the market to be 1-1.5 billion RMB.

“The development is still in its infancy. Supermarket chains primarily test the water in mega cities like Shanghai and only recently expand to cities outside of Shanghai. Freshippo in Hangzhou (10 million population, 170km from Shanghai, headquarter of Alibaba) was not selling flowers until this year. The promotion of attractive prices has developed the purchase habits of flowers for home use. We think this is definitely a fast-growing market.”

How much shopping area does Freshippo allocate to flowers? What is the model of sales?

“Depends on the size of the shops. There are 200m2 in Freshippo X stores (big-box format retail stores). Small stores have 15-20m2 for flowers.

“Freshippo allocates more area to its medium and large stores than Costco. As an innovative product range for supermarkets, it takes time to see economic returns. Compared to countries with mature flower consumption, retail flower sales in China is still a tiny proportion, but we are confident about its future development.

“At the moment, it is not a flower shop next to the supermarket. Freshippo equips assistants in the store to overlook the flower displays, some have floristry training, but most do not. The supermarket does not try to match the service provided by florists.”

What are Chinese consumers’ impressions of buying flowers from supermarkets?

“We first started with Shanghai three years ago, and the consumers are educated and learn a lot about flowers after three years. They have developed a more diversified need.

“In the beginning, consumers were price-sensitive, but now they understand vase life and flower quality. Stores newly introduced flowers this year in inland cities like Zhengzhou and Changsha, we observe the consumers had similar mindsets to consumers in Shanghai three years ago.

“It is a brand-new product in the supermarket, and we are sure gradually the needs will evolve. Consumers are buying red and white carnations straight-colour bunches, but perhaps they will be sold next year in mixed bunches. Freshippo has around 20 per cent as mix bunches at this moment compared to 80 per cent in other countries. “Nevertheless, culture and business model is different. What working well in other countries may not be the best fit for local business.”

A few years ago, the majority of Chinese consumers regarded chrysanthemums as funeral flowers. Is this still true? What colours sell well?

“Chrysanthemums used to be associated with a funeral, predominantly the colours yellow and white used to be a taboo, however, things are changing.

“In supermarkets, chrysanthemum is the second-largest seller next to roses. Colour preferences have changed as well.

Can you guarantee a seven-day vase-life? Are all your products sourced from local farms?

“Not being marketed this way, but we are working on it. The majority of mainstream products such as roses, chrysanthemum and lily are sourced from Van Den Berg, De Ruiter and Lynch group farms in China. They have a good vase life and a strict quality standard. Meanwhile, tulips and protea are from import.

“Overall import quantity is reduced since corona. We learn that Colombian and Ecuadorian roses are for mid to high-end consumers, which are not suitable for retail sales.”

Chinese Valentine is approaching. It is a big flower sales event. How has the recent pandemic affected flower supply

“Everything is giving way to make sure stable food supply, flowers farm supply would be influenced. But I do not think the impact would be significant. Farms used to rely on Valentine and Chinese valentine heavily, but since the market for home consumption increases, demand is more distributed over the year. Thus farms have much better turnover nowadays.”

Can you tell us more about the collaboration between Kunming International Flower Auction and Freshippo? Are you part of the project?

“Yes, I am part of it. The collaboration is under negotiation, but the attempt focuses on supply chain improvement combining the strength of Freshippo’s strong supply chain management ability and flower supply power of the Flower Auction. The goal is to benefit both parties.”