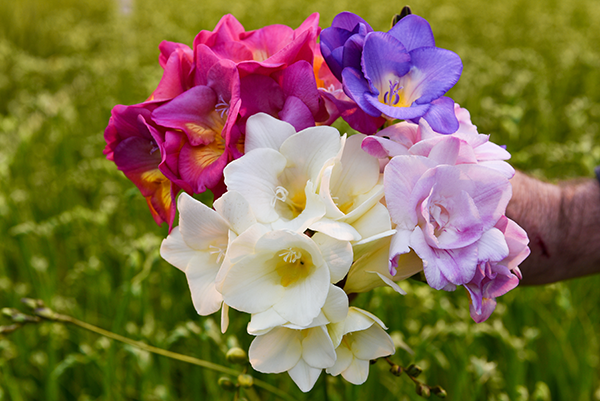 Netherland: Unicum, a Dutch freesia growers’ group, celebrates its 25th anniversary this year. FCI sat down with Unicum chairman and freesia grower René van Dijk to talk about these fragrant flowers and celebrate the alliance’s joint success and achievements. (This feature appears in FloraCulture International, July-August 2021) 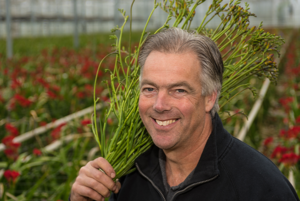 Twenty-five years ago, Unicum was one of the first Dutch grower groups to serve their (retail) customers better. To date, the growers’ alliance includes eleven growers and is widely known as Europe’s one-stop shop for quality freesias supported by a staff of dedicated salespeople and a bespoke bouquet handling service.

Economies of scale and ambition
Naaldwijk-based Freesia grower René van Dijk is a long-time Unicum member and is the group’s current chairman. He took over his father freesia nursery in 1988. “My dad’s curiosity led him to do revolutionary things such as using artificial lighting and groundcover. But his ideas were also born out of frustration as he could not always cope with an ‘untameable’ freesia, the vagaries of the weather and fluctuating harvests. It was always amazing to see how his growing techniques and technology often paid off in as little as 12 months.”

While Van Dijk senior, who still enjoys his daily walks around his son’s nursery, was one of the foremost ‘freesia-culturists’ of his time, the one thing he failed to do was expand his business to benefit from the economies of scale. “Ideally, a freesia nursery occupies 4ha. When I took over the reigns from my father, the company was 7,000m2 and it is now 18,000m2. In terms of growth strategy, I was lagging behind, but I am now catching up a great deal,” says Van Dijk adding that in the past, the Dutch freesia industry has seen the rise and fall of the 10ha freesia king, who, in the absence of necessary capital, good workforce and planning quickly lost his crown. “The thing is in freesias you use staggered planting, each time you plant a greenhouse section the whole growing process starts over again with each variety having its complicated culture requirements. By doubling in size a grower might easily be tempted to grow a much wider range of colours. Then the risk is that you start focusing too much on your plant material – the corms you need to resuse multiple times – instead of putting your energy in finishing your cut flower crop.” 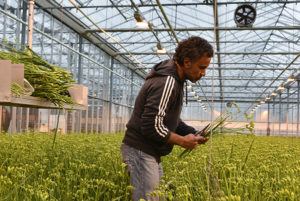 All flowers are manually bunched in between the flower beds – a specialist job that not everyone manages with ease.

Untapping retail demand
In commemorating Unicum’s Silver jubilee, Van Dijk says the grower’s alliance has been instrumental in advancing and servicing the retail trade in freesias. However, it was far from a shiny start 25 years ago. Van Dijk recalls, “The freesia market was in the doldrums with supply exceeding demand and the retail market remaining untapped. Only a handful of retail growers had tried their luck in servicing UK retail without any remarkable success.

Product volumes were too heavily fluctuating, and stems were either too short or too long, flowers were either immature or too mature. Unicum’s purpose was to join forces to understand the retail customer’s needs better. Also, we wanted to empower freesia growers while generating a sustainable, reliable and sizeable year-round supply of premium flowers for the mass market.

“I have always had an enquiring mind, eager to know more about my customers and receive product feedback. And I did not need to think twice about joining also because I wanted more security of orders within my company.

The decline of production
Since its inception on 29 February 1996, Unicum strives to supply each market segment with a bespoke product portfolio. Today, Unicum’s production volume – 65 million freesia stems per year- remains almost unchanged, the alliance’s membership and acreage decreased dramatically to 13 from 23, and 26 hectares from 55 hectares.

Van Dijk freely admits, “The prospect of further production declines is a cause for serious concerns as they risk putting the order fulfillment process under too much pressure. If your group of growers are too small, others can no longer jump in to help with completing orders.”

The freesia grower cites several reasons for the stark decline in membership. “Eighty per cent of growers that retired did not have a potential successor, only two withdrew because they wanted to directly sell to the wholesale business, and one swapped freesia for lisianthus.”

Van Dijk attributes 65 per cent of total Dutch freesia production volumes to Unicum members, 50 per cent of total Dutch acreage. “To my knowledge, there is not any grower’s group respresenting such extensive production areas. In mini gerberas and chrysanthemums, for example, this is between 20 and 30 per cent. While in potted plants, Decorum was the country’s first grower’s group, and Unicum was the first to include cut flowers.”

A unifying industry voice
In the 25 years of Unicum’s history, Van Dijk wants to pay tribute to his mentor and Unicum’s founding father, Ton van der Houwen. “He has been a focus for unity with the group’s diverse community of growers and customers. Unity is ‘no walk in the park’ because the question of how to distribute retail orders in an equitable way among all members has more than once spiked fiery debates,” admits Van Dijk. He adds, “This unity was needed, especially when prices on the day-to-day market were under pressure and each of use was eager to have a year round deal. Fortunately, there is much more togetherness within Unicum which can largely be attributed to the quotum system, created six years ago. This system gives a maximum annual volume per colour and grower, and this has brought much calm among members. Even among those who grow red and pink varieties known for producing fewer stems per m2 and quicker ageing corms. We deduct a small amount from white and yellow best sellers to compensate for the additional costs these growers face.” 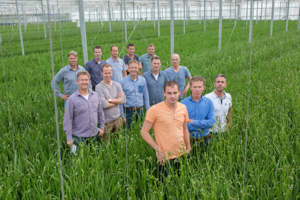 To date, growers’ alliance Unicum includes eleven growers and is widely known as Europe’s one-stop-shop for quality freesias supported by a staff of dedicated salespeople and a bespoke bouquet handling service.

The need to hire younger talents
Van Dijk is delighted to see some young hands joining the old hands. “We have several 30-40 years olds. But there will always be a need to hire younger talents to secure production volumes and new insights,” says Van Dijk. He notes that ironically Unicum’s Silver Jubilee revealed a silver lining on the Covid-19 cloud.

More recently, the freesia trade is blossoming as never before. Due to the coronavirus pandemic, people spend much more time at home, taking an interest in decoration and home styling. “Currently freesia prices are skyrocketing. Yields between 40 and 70 cents per main stem may lure in younger aged groups. But one should not forget that for many years profit margins in freesias have been razor-thin, labour costs ever-increasing, and labour shortage alarming, especially during the last five years.

“So we have incorporated automation in every possible aspect of our business including the planting and harvesting of corms. Unfortunately, efforts to develop a freesia bunching machine were in vain with the untangling of combs being the major obstacle. All flowers are manually bunched in between the flower beds, a specialist job which not everyone manages with ease.”

On the brink of a technological revolution
While the processing of flowers remains a challenge, the Dutch freesia industry may be on the brink of a technological revolution in terms of growing systems. Van Dijk mentions the extraordinary results fellow freesia grower Matthieu Barendse (with whom he co-owns a Limonium nursery in Ethiopia), is achieving in a newly-built growth chamber for three-tier production of cut freesias under LEDs.

Barendse grows ‘FreGanzia’ – featuring double blooms of pure white flowers – in a fully conditioned growing environment. The station is without natural daylight and offers convenience with strong, sturdy main and side stems harvested in one single round and quality flowers available all year round. The system may ramp up production, doing between four to five crop rounds instead of the traditional two harvests per year. The 850 solar panels provide electricity for the LED lighting, and thanks to the closed-loop system, pesticides are unnecessary. Barendse also reuses the drain water, and the climate cell is almost emission-free. In December, Barendse won the Royal FloraHolland GreenInnovation Award for his groundbreaking work.

“Matthieu and I are thrilled about this project considering it as the sole lifeline to this type of flower crop. We believe this hi-tech protected cultivation may be a blue print for the future, making Dutch freesia growing more eco-friendly and economically-efficient and less dependent on the climate factor and physically less-taxing.”

Breeding more showy freesias
Van Dijk sees even more potential, for a more prominent freesia presence. He notes, “A UK consumer survey found that 30- to 45-years-olds are the largest spenders on freesia. We always thought that buyers were in their 50s, 60s and 70s. At flower shows and events, consumers tell us how they appreciate the flower’s fragrance and hues. I don’t believe freesias suffer from an image problem. But ‘seeing is buying’; getting consumers to see our product is crucial for impulse buying. The problem is that freesia blooms are relatively small. New genetics and advanced breeding technology should lead to bigger blooms and double blooms with higher yields. To date, freesias for the UK retail come mainly as Mono or Mono+, freesias arranged amidst some green foliage. As a filler flower, freesia is often too expensive but it also gets easily unnoticed. In mix bouquets you can partially avoid this by adding 55cm freesia stems to 50cm tall bouquets, so that flowers rise more prominently above the other flowers.”

Meanwhile, the creation of a new Freesia variety is complex, costly and time-consuming. “Producing a marketable variety can be the product of more than ten years of development. Attempts with tissue culture propagation have been unsuccesful so far. And bringing longer-stemmed, large-headed varieties to market is one, but newcomers must also produce enough corms to reuse. Consider that when growing freesias often 10 per cent of corms get lost,” explains Van Dijk. 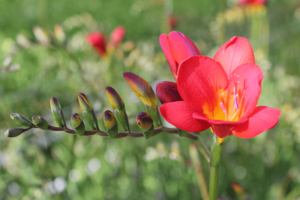 He grows the double-flowered white variety ‘Volante’ and the deep red single-flowered ‘Red Passion’. “Double blooms are attractive but on average produce 20 per cent fewer flowers. While traditional wholesale customers will demand the more voluminous and fragrant double blooms, the retail segment will often prefer the extended combs of the single flowered varieties.”

Standing still is not an option
Meanwhile, a range of festive activities for member growers, employees and customers will mark the 25-year milestone this year. Celebrations began on 3 March with all growers enjoying coffee and cake treats in their greenhouse.

Van Dijk concludes, “Despite the trend to smaller production areas along with a decline of the number of growers, Unicum has been able to stand the test of time, evolving into one of the most potent sales organisations in the Dutch freesia industry. It supplies a vast array of freesias in different colours. And we are convinced that the freesia is back on the map and among one of the highest ranking cut flowers in the international market. As a growers collective, all Unicum members have worked hard to build the Unicum brand. And their tireless efforts have enabled them to serve a wide group of customers. As an individual grower we would have never achieved this.”

Van Dijk believes there is every reason to congratulate Unicum. “I am brave enough to say that without Unicum there wouldn’t have been any freesias left on the market today. In my view, Unicum has allowed Dutch freesia growers to prove their added value to wholesalers and retailers. For the next 25 years, I hope that this cooperation will expand further, welcoming more growers, more business and more intensive collaboration and cross pollination. Standing still is not an option.” 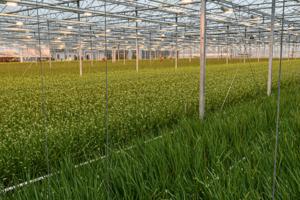 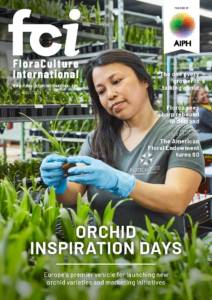 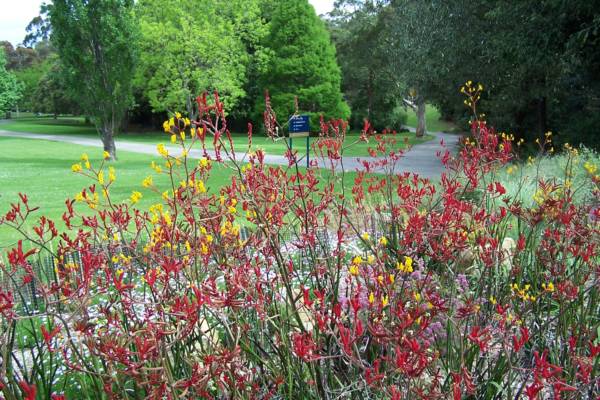 MOOREBANK, Australia: People looking for facts and figures about Australia’s floral industry can now turn to the Australian Flower Trade…