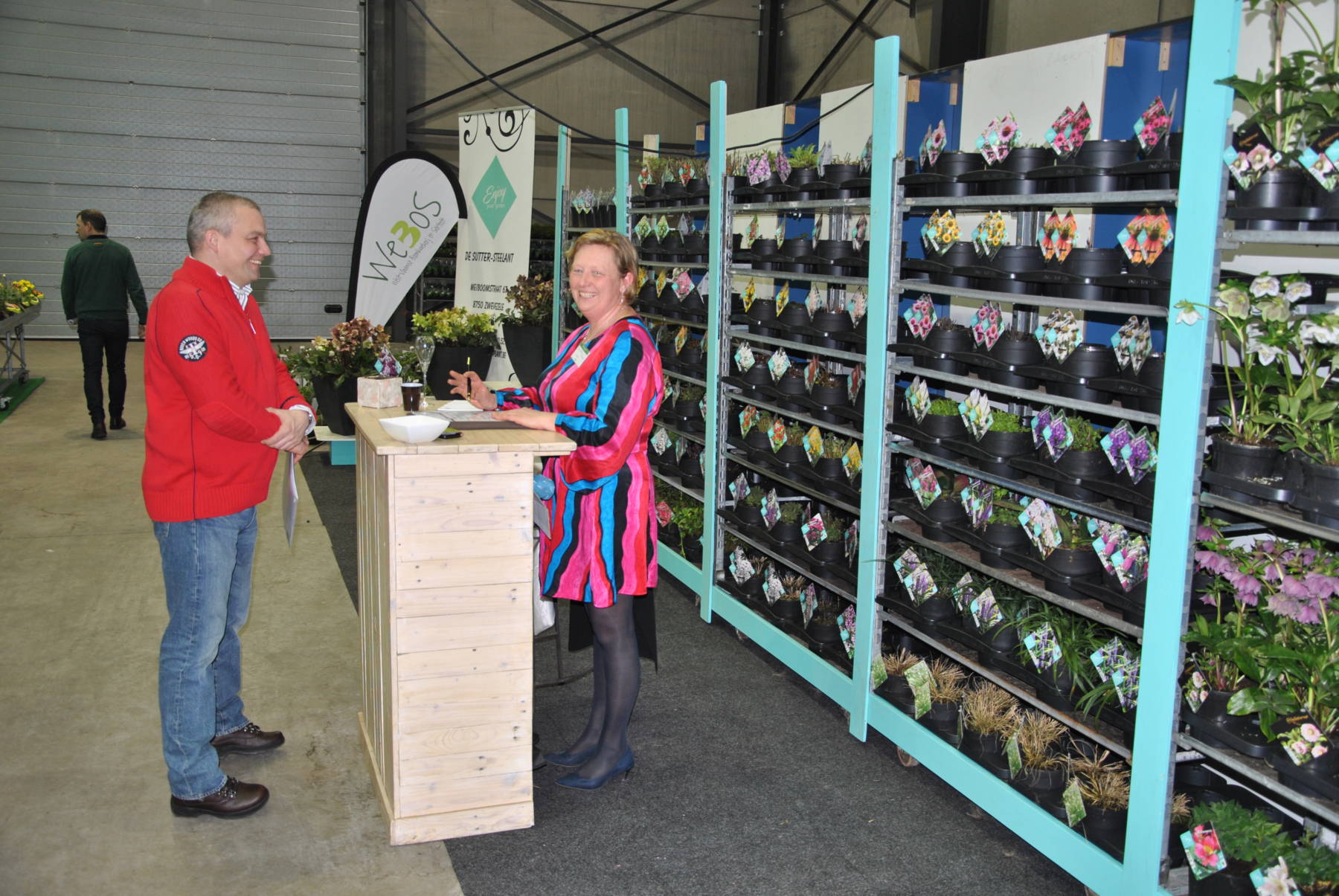 WAREGEM, Belgium: Finally, on 3 March, Waregem enjoyed its first sunny day after weeks of gloomy weather caused by atmospheric conditions that created rain and storm after storm. Blue skies provided the fitting backdrop to the city’s spring edition of Florall, Belgium’s leading trade show for ornamental horticulture bringing together more than 80 exhibitors who treated around 800 industry professionals to their newest products and services.

The Florall trade fair first began in 2007 and is held twice a year, in spring and autumn. In 2014, event organiser AVBS, the Belgian board for ornamentals growers, florists and landscapers, decided to switch from a two-day event to a one-day format, starting with their August 2014 trade show.

Encompassing one, large hall, the easily accessible Expo Waregem offers free parking and, something one cannot miss when in Belgium, free fries.

Florall aims at promoting Flanders’ ornamental horticulture industry and spring sales in a dynamic and proactive environment. The fair attracts breeders, growers, wholesalers, technical suppliers, service providers and garden retailers from across Belgium and – to a lesser extent – from abroad.

AVBS’s Project Assistant Hilde van Elsuwé tells FCI that her organisation is always ready to nurture collaborations and partnerships. For example, with Dutch amenity plant show GrootGroenPlus they set a ‘novelty roadshow’ by presenting a host of award-winning new plants at their events.

Van Elsuwé adds that 2020 marks a special year for the country’s industry as on 30 April, Their Majesties King Philippe and Queen Mathilde of Belgium will open the 36th edition of the Ghent Flower Show/Floralies of Ghent. “We’ve hired a team of influential landscape designers including Inge De Bruycker, Inge Vanoverbeke and Jurgen Vandewalle who will create a distinctive design for a 2,875m2 AVBS show garden. As the Floralies of Ghent coincides with ‘Van Eyck – an Optical Revolution’ at the Museum of Fine Arts in Ghent, the designers will draw inspiration from the works of the 15th century Flemish master. A ‘tableau vivant’ will incorporate 360 genera of fresh cut flowers, potted plants and nursery stock products supplied by 80 Flemish growers.”

Making a valuable contribution to the AVBS garden at the Floralies is Laurierkwekerij Piet Mertens, a long-running Flemish based nursery in Oostkamp. Piet says his company is a supplier and specialist grower of bay laurel (Laurus nobilis) which is hand-trimmed with secateurs and shaped into a pyramid, ball or lollipop standards or in mini trees with ornately plaited or spirally trained stems. “Half of the trade involves direct selling to garden centres across the UK and Ireland, Germany and Austria. Direct sales require significant commitment of management, time and attention but the results are worthwhile. The other half of our trees  predominantly sell through Dutch export trading companies.”

Like any other plant production nursery, propagation at Laurierkwekerij Piet Mertens plays a vital role in the profitability of the business. Cuttings are taken by mid-August from healthy specimens and are fully rooted by November. “We harvest around 30,000 cuttings per year of which 10,000 we use to grow on in (mostly) 27 cm pots, while the remainder we sell as smaller bay laurel plants used for cooking.”

In 2011, the Flemish bay tree, just like the Ghent Azalea, was recognised as a European Regional Product with a EU seal of approval. Mertens praises the effort VLAM has undertaken to obtain the coveted title, and says that it was regretful that he had to withdraw from the project as it required too much time-consuming paperwork. He says, “Generally speaking, due to the devastating outbreak of the plant-bacteria Xylella fastidiosa (Laurus nobilis is a host species) in Southern Europe, traders are increasingly demanding bay laurel of Flemish origin.”

Mertens believes it is important to participate in Florall as it provides valuable face-to-face time with his customers. At the same time, the event also allows him to write several orders. “However, the epicentre of Flemish nursery stock production is in Ghent and I therefore advocate for a venue which is closer to home. From Ghent, it is still a 20-minute drive to Waregem. Ghent has its iconic Floralies building in the Citadel Park which is unused most of the year. Why not move to this place?”

In his stand filled to the brim with Primulas, Violas, Ranunculus and Delosperma third generation Patrick Naudts, owner of Fleurig bvba in Lochristi, says that the first flowering crops of the year are ready for sale to local flower shops, garden centres and local authority customers. He says that he chooses to grow his plants in bigger pots ranging in sizes from 19, 20 and 23cm. Not only do stronger, healthy plants keep his customers happy but they are also better for the environment. “Sometimes it makes me sad to see how bedding plants are forced to the maximum with lighting and fertilisers for early spring sales and sold as MPS certified products. Fleurig bvba is committed to the environment but prefers a visible approach by planting a 2ha forest adjacent to our nursery.”

Naudts grows his crop either from seed and cuttings which he buys from his friend Rudy Raes or cutting farm DeCock Plants which operates from sites in Comines (Belgium) and Modjo (Ethiopia). 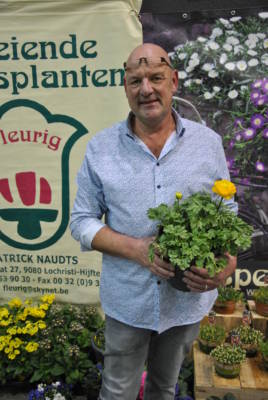 The Oprins nursery is a quintessential nursery stock company and grows its plants in Rijkevorsel, not far from the Dutch border.  Sales Manager Pieter-Jan Vermylen says the company, founded in the 1970s by Jan Oprins, is emerging from turbulent times. It  downsized its production area from 100 ha to 40 ha and consolidated its product portfolio to focus on five performing categories: Fargesia, Ilex, Hydrangea, grasses and Sarcococca. The company sells its products through wholesalers with around 90 per cent of plants eventually sold to export markets. Occupying pride of place in their stand was their Hydrangea serrata Magic Pillow, their proprietary breed that develops lush and weed-suppressing groundcovers and will vie for the attention of Floralies visitors this spring. Vermylen concluded by saying that the company has returned to growth with a new 2.7 ha cabriolet greenhouse currently under construction.

Visually appealing perennials are the speciality business of Zwevezele-based De Sutter&Steelant, a 2 ha perennial nursery run by husband and wife team Dominiek and Anje. Theirs is an extensive product portfolio of visually appealing perennials with Helleborus, Anemone, Astrantia, Echinacea, Phlox, Salvia and Sedum sold under the Enjoy Your Garden label with an easily recognisable quadrangle label. The company’s co-owner Anje says they grow around 500,000 plants which are sold directly to local garden centres or indirectly through wholesalers. Starting material, that is in tissue culture plants, are predominantly sourced from Gootjes Allplant from the Netherlands. In Helleborus, Heuger and Syngenta (Christmas Carol) are among their trusted suppliers. Waregem Expo in Waregem was the setting for the coveted Florall Awards, Belgium’s green industry’s version of the Oscars that honours the best growers, the smartest merchandising concepts and the most spectacular breeding breakthroughs.

At this year’s spring edition of Florall on Tuesday 3 March, Distylium ‘Vintage Jade’ submitted by Willy De Nolf NV, a 30 ha freehold wholesale plant production nursery from Waregem, was presented with the Florall Gold Award. This shrub, sold under the First Editions brand of Minnesota-based Bailey Nurseries, has a mounding shape and is evergreen, with dark green colour year-round. A member of the hazel family, Distylium produces delicate red flowers that appear in the winter. This highly versatile plant thrives in full to partial sun, in wet soil or dry.

Grower Hoogeveen Plants, operating from a 30 ha site in Hazerswoude, Netherlands, scooped up the Florall Silver Award for its Pyracantha coccinea ‘Red Star’ that has fewer thorns along the length of its stems. It produces masses of white flowers in late spring and early summer followed by glossy red autumn and winter berries. This award-winning variety can be grown as a freestanding shrub but also makes a perfect houseplant. Grower Tim Wyckstandt from Aalter was presented with the Florall Bronze Award for Agapanthus ‘Fireworks’, a cultivar from Plantipp, an independent plant breeder’s agent serving the European market.

According to Tim, who is a part-time horticulture teacher, ‘Fireworks’ has stunning bicolour flowers (white on the inside and white and blue on the outside) and produces flowers from summertime into autumn. Tim is also a self-acclaimed Agapanthus aficionado. He also ventures into breeding and selects  showy flowers, continuous blooming and high petal counts. Expect the first results of his breeding programme next year. 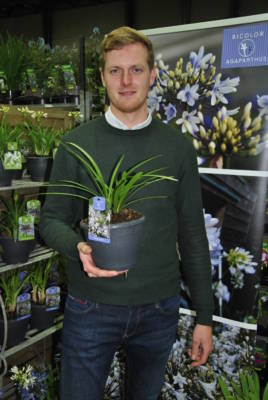