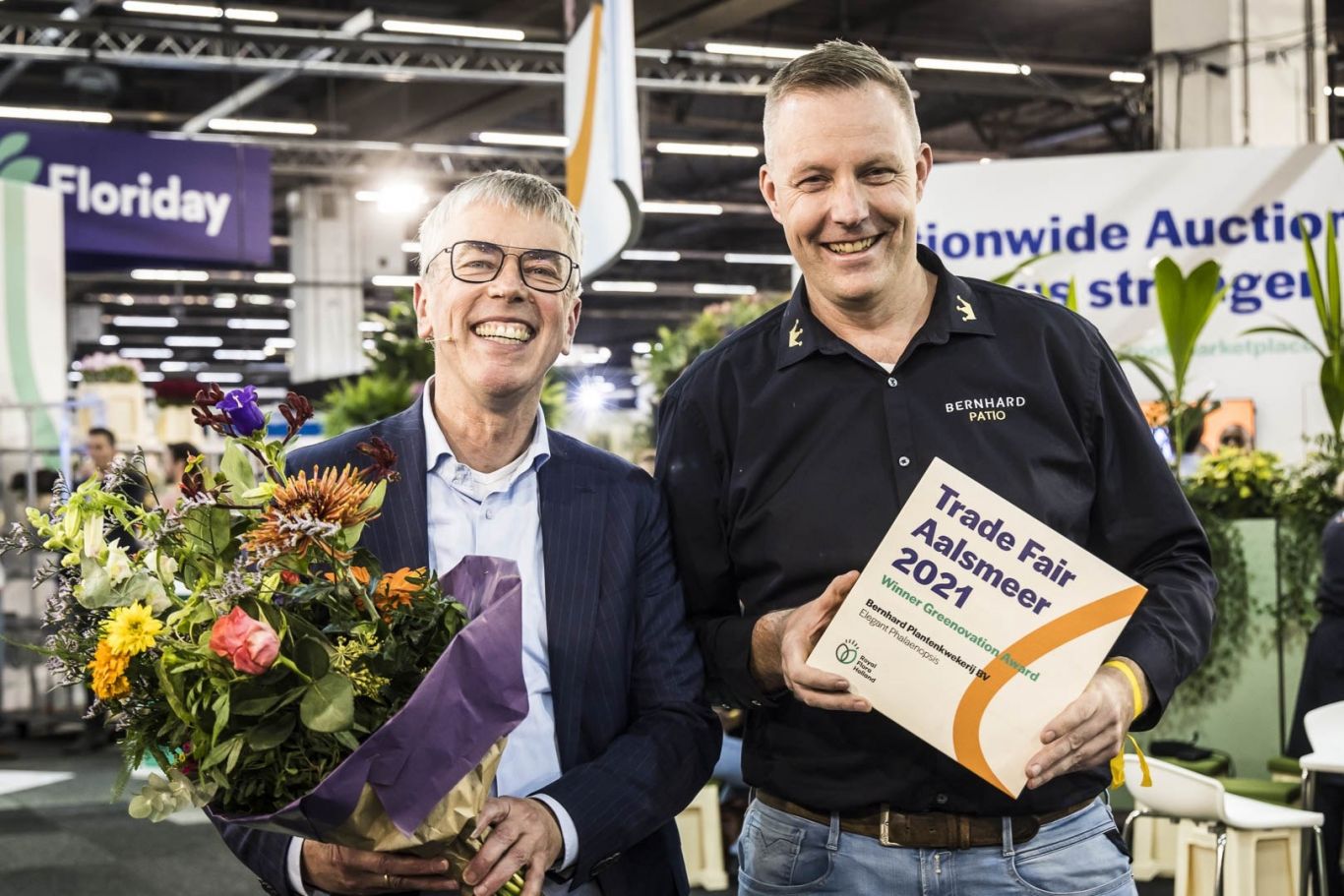 Set against a backdrop of applause, Bram Bernard took to the Holland House stage at Trade Fair Aalsmeer on Wednesday 3 November 2021 to accept the award from auction boss Stefan van Schilfgaarde.

Royal FloraHolland’s annual Greenovation Awards recognise horticultural companies which have demonstrated exceptional leadership and achievements in the field of sustainability.

Bernard is a third generation cut rose, potted phalaenopis and bedding plant grower in Flevoland, the Netherlands’ ‘newest’ province, created largely on post WWII land reclaimed from the sea.
At Bernard, run by brothers Bram and Simon Bernard, a high level of sustainability (and thus a minimal footprint on the environment) is achieved through a number of operational practices, such as: the retrieval of CO2 from its heating systems for distribution back to plants; integrated pest management systems eliminating the need for chemicals; solar electricity production in combination with geothermal energy used to heat the nursery’s greenhouses with Elegant Phalaenopsis.

According to the jury, this concept makes an enormous contribution to the floriculture industry’s biggest sustainability challenge: becoming climate-neutral.

In accepting the Greenovation Award Bram Bernard said,  “This is our direction for the next fifteen years and we have accelerated things somewhat by winning this award. We are located in the Flevopolder, which fortunately means we have the possibilities and opportunities to combine solar panels and geothermal energy. The fact that we are winning this award is obviously a great boost.”

Third in third place was Florius Flowers, the company which was nominated for its Paper Sleeve concept, a 100% recyclable flower sleeve made of 20 per cent flower stem fibres from their own waste stream.

Online votes made up 50 per cent of the result, the other 50 per cent was determined by a panel of expert judges including Quincy von Bannisseht, Strategic Manager at Glastuinbouw Nederland, Anne-Lotte Boudeling, CSR Officer at FM Group and Maarten Bánki, Manager of Sustainable Development & Quality at Royal FloraHolland.

Auction boss Van Schilfgaarde was happy with the quantity and quality of nominess. He said, “This year, we received more than 20 entries, all of them wonderful initiatives to make our industry more sustainable. I am extremely proud of that. It shows that the floriculture industry is in full swing when it comes to sustainability. With initiatives like this, we can inspire each other and show everyone that we are committed to growing flowers and plants with respect for people and the environment.”