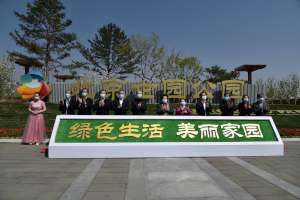 BEIJING, China: Building on the ‘Live Green Live Better’ theme, the city of Beijing  opens the doors of its International Garden Festival. It takes inspiration from Chelsea Flower Show, the Chaumont-sur-Loire garden festival and Expo 2019 Beijing on which former grounds it takes place.

Beijing’s brand-new garden festival is part of a 503 hectares site that was built initially to play host for Expo 2019 Beijing; the AIPH approved A1 World Horticultural Exhibition. For six months this site dazzled millions of visitors with spectacular horticultural displays and events, from its official opening on 28 April until 9 October 2019.

Expo 2019 Beijing was hosted by the Chinese Government and organised by the Beijing Municipal Government under the auspices of the Bureau International des Expositions. Located amidst the Taihang mountains, the event occupied Beijing ‘s suburb of Yanqing.

The Expo park exemplifies its theme designed to champion the spirit of respecting and integrating nature. During construction, 50,000 trees were preserved, and 100,000 trees and shrubs were planted to improve the condition of wetlands, purify water and provide a habitat for migratory birds.

Right from the start organisers made clear that the Expo was a ‘site to behold’ and in keeping their promises they celebrate today the opening of Beijing’s first International Garden Show which aims to make the legacy of the Expo everlasting.

Representatives from international flower breeding companies, well-known gardening enterprises and architects from the United States, Germany, Japan and the Netherlands, as well as representatives from specialised educational institutions from home and abroad have collaborated in the project.

Addressing today’s opening of the Garden Festival via videolink AIPH Secretary General Tim Briercliffe says he has “such wonderful memories from the Expo. The combination of so many countries, coming together to celebrate horticulture and present their ideas on what it means to ‘live green live better’. Who could have imagined how different the following year was going to be?”

Briercliffe was addressing the audience in Beijing from his home. “Because that is where I have to be to play my part in fighting the Coronavirus pandemic. I have to go through what you have already been through. I am really delighted to hear that many people will be able to visit the Expo site in Yanqing again for the First Beijing International Garden Festival. This exhibition marks the passing of a dark winter for the citizens of the world.  Springtime always gives us hope. Whatever happens in the world, the buds will always come, and new life emerges from what seems dead. It reminds us that we will rebuild and recover from the difficulties and sadness of the months that have gone before.”

Briercliffe feels sorry that he cannot be in Beijing to share its garden festival and adds, “But what you are doing shows the resilience of the citizens of Beijing and the recognition that living green means living better. This message from Expo 2019 Beijing will last forever.”