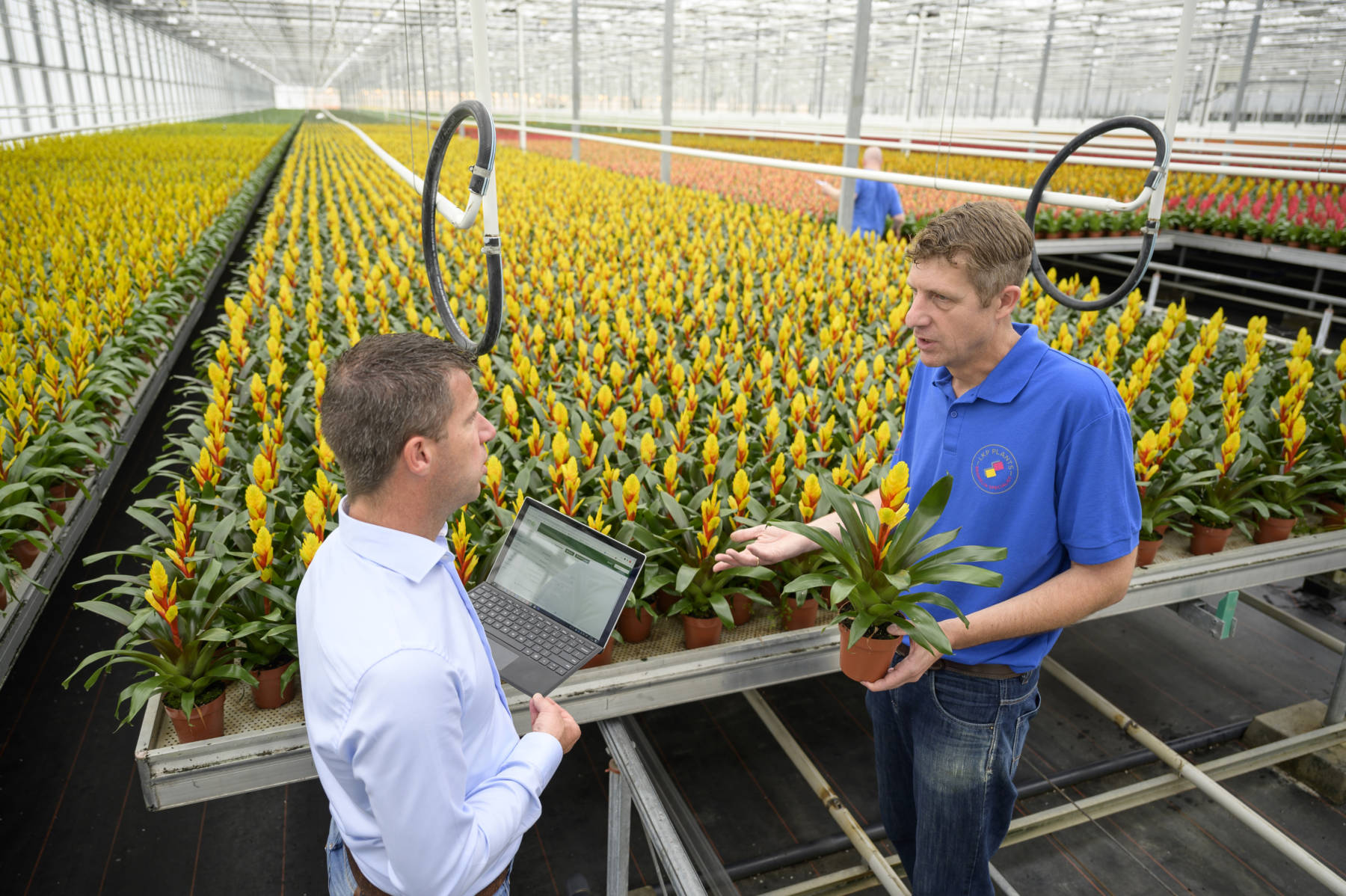 MPS-ABC standard enables the grower to truly measure the impact of his actions on the planet, allowing him to take counteracting measures.

Pressure from consumers, social movement groups and retailers have propelled a major overhaul of Dutch sustainability certification for ornamental horticulture MPS.  By revamping their system, they have become more customer-focused, allowing growers to document their energy, water, fertiliser, chemical use, and waste management more efficiently. Real-time, mobile-friendly record-keeping per crop has partially replaced periodic registration, while graphs provide growers valuable insights into their usage this year and last year. FCI sat down with MPS’ newly appointed managing director Daan de Vries and MPS senior policy advisor Harold Beek, whose involvement with the system has been there from its inception.

There’s good news, says De Vries, who joined MPS in December 2020. He references the newbie offer; Dutch and EU growers who are new to MPS pay €290 for the first year of MPS- ABC membership while the price for industry peers outside Europe ranges between €600-€1250, depending on the company’s size, location and this tariff includes audits and crop sampling. MPS senior policy advisor Harold Beek swiftly counter-attacks, pointing out that some things in life cost money but can give a great return on investment. “MPS offers user-centric support,  serving growers in both the Netherlands and worldwide through its Dutch-based team and a group of MPS coordinators on site. We strongly believe there’s more to environmental certification than banging a nail into your wall and hanging the certificate. The standard allows horticultural entrepreneurs to collect big data sets which are a great way to gain an edge because they can be used for benchmarking – how’s my business performing next to my industry peers? – and tracking – how’s my environmental performance doing this year compared with last year?”

MPS’ inventory tools have become increasingly precise and are moving towards Life Cycle Analysis (LCA) and Product Carbon Footprinting. LCA takes the entire existence of the product into account: that is in the case of ornamental horticulture from the young plant stage of growing the product into a finished plant, through the use phase where the plant or flower decorates the home or garden, to the ‘end-of-life’ stage or disposal of the product.

That’s why MPS partnered with Royal FloraHolland,Wageningen University&Research,  sector body Glastuinbouw Nederland, ABN AMRO, Rabobank, the Dutch Ministry of Agriculture, Nature and Food Quality, the Benefits of Nature Foundation, the Dutch Fresh Produce Centre, Pre-Sustainability, and Blonk Consultants. Together they have embarked on the Hortifootprint, a digital tool that simplifies calculating the carbon footprint of flowers, plants, fresh produce, and fruits and based on Product Category rules, requirements and guidelines as published by the European Commission.

The next step involves collaboration at the EU level to develop the Flori-PEF (Product Environmental Footprint) for ornamentals only, which will be based on the Hortifootprint and will hopefully be available by the end of next year.

International standardisation is vital, says De Vries. “You need broad support for the methodology, otherwise you risk embarking on discussions about the different methodologies only instead of the outcome. Retailers for example, will only come on board if you present them a generally accepted set of rules and growers want a tool which is also used in Germany or France.”

De Vries explains that Hortifootprint is a subset of a complete Life Cycle Analysis for which MPS-ABC provides a wealth of data on the use of crop protection agents and fertilisers. Following the certification’s latest overhaul in 2020, growers record crop protection agents and fertilisers at the application level, answering questions such as: What was used where? When? And in what amount? Still, recording of energy, water, and waste continue a four-week frequency. LCA in ornamental horticulture can create a headache, elaborates Beek. “The challenge lies in defining its scope and collecting all necessary data. By focusing on cradle-to-grave for example cut flowers sometimes classify for less sustainable because they have a shorter shelf life than houseplants. A cradle-to-grave scope would also mean that you will have to calculate the carbon footprint of transport until its final point of destination. But that’s the type of information the grower does not possess causing default data to be used. In Hortifootprint and Flori-PEF we have chosen for a cradle-to-grave scope which can provide useful insights into growing roses in Africa versus greenhouse grown roses in the Netherlands.”

These insights may indeed be valuable. But they also bear the substantial risk to be revealed to parties that interpret the data wrongly. Just imagine how valuable the MPS-ABC data on specific crop protection agents is for the world’s chemicals giants.

De Vries: “MPS-ABC takes data protection very seriously with GDPR having transformed the power of data ownership in the hands of our customers. Under the standard agreement between MPS and its customers, MPS is able to share average industry values externally, but with strong safeguards to keep data of individual companies confidential. Supermarkets may want to use some figures for storytelling on sustainable flowers. We are carefully moving towards providing more specific trends and forecasts on sustainable flowers, but that’s a delicate matter as you want to avoid that this information is interpreted out of context.”

Mandatory certification or not?

Last year, the world’s largest flower market Royal FloraHolland ordered digital record-keeping of environmental performance and mandatory certification for all growers by December 2021 – meaning all members and non-members supplying flowers and plants to the marketplace. In an earlier interview with FCI magazine, auction boss Steven van Schilfgaarde clarified that horticultural entrepreneurs must embrace sustainability, when positioning a company for long-term success. He says that because the industry is highly vulnerable to negative connotations towards poor flower farming practices, adding that of the auction’s annual turnover of €4.65 billion, currently 81 per cent can be attributed to flowers and plants grown environmentally friendly.

When asked about the current state of the MPS trade in terms of mandatory eco-certification in the horticulture value chain, De Vries says, “The Floriculture Sustainability Initiative (FSI) regroups 15 sustainable standards and schemes. FSI members have promised that 90 per cent of flowers and plants will be responsibly grown and traded in 2025. Moreover, 21 flower bulb and perennial plant wholesalers have committed themselves to 100 per cent eco certified products by 2024. So, flowers and sustainability are clearly gaining traction.”

De Vries understands the backlash Royal FloraHolland received from its members. “I believe their board made a good decision by postponing the enforcement and looking into how it can accommodate their various requirements. There are many ways to get to the same result; in the end a firm sustainability strategy and more transparency is a need for any sector in the economy.”

The Intergovernmental Panel on Climate Change (IPCC) report found that humans have caused ‘unprecedented and irreversible change to climate’. Considering the IPCC conclusions, Beek thinks it is very rewarding that the MPS-ABC standard enables the grower to truly measure the impact of his actions on the planet, allowing him to take counteracting measures. “It happens that greenhouse growers stop adapting certain growing techniques after finding out they don’t work, whether crop protection, fertilisation, energy water or waste is concerned.”

Beek realises that saving the planet comes with many emotions, specifically on the consumer level. “As an industry you can do your utmost for adopting a scientifically-proven approach never forget that climate change is emotional for all of us. In MPS-ABC growers can earns most of their points in the field of crop protection agents because there is where the emotion among consumers is deepest. But the truth is that climate-wise the impact of burning fossil fuels is much higher. Fertilisers and packaging are other examples. Plastic pollution is horrible and of course action is needed but their impact on climate change is not as big.”

Flowers and plants are shipped and processed in large quantities and around the world which means it is usually very costly to keep certified ornamentals from non-certified ornamentals at the wholesale level especially when you think of the mixed bouquet. In daily practice this means that even if floral wholesalers purchase MPS certified flowers they might still be combined with ornamentals that are not produced according to MPS principles.

Beek agrees that there is a need for a chain of custody strategy towards ornamentals. “This is certainly an important issue to address. What kind of status do you need to grant to floral wholesalers because that’s where flowers from around the world come and are blended together. I reckon FSI deserves credit for raising awareness among all actors of the supply chain, telling them they sustainability is not something you can reach on your own but requires partnership and collaboration worldwide.”

MPS: more than 25 years of excellence in eco-certification

The coronavirus pandemic was a major setback for the 25th anniversary of MPS, with the cancellation of its celebratory programme.

Founded 25 years ago by the Dutch flower auctions (back then, there were still seven independent flower auctions) and regional sector body Zuidholland Glasdistrict, MPS was the first eco-certification standard for ornamental horticulture.

However, people often forget it had a ‘ecological’ forerunner; the GEA project, which former flower auction VBA launched even before MPS’ inception. GEA’s mission was to market 100 per cent organically grown cut flowers. The project did not bring the anticipated success as there were issues with product availability, shelf life and transportability and overall brand recognition.

MPS always listens to its stakeholders when taking the standard to its next level, trying to answer a question: What are the wishes and requirements of the market, society, and growers? Wishes and requirements are one thing, but must also be achievable technically speaking. MPS-ABC allows growers to measure the environmental impact, creates transparency, and stimulates and motivates companies to become more sustainable and reduce their environmental impact. In global ornamental horticulture, integrated pest management is being applied more and more frequently, at the same time as reducing the use of higher-risk chemical substances (high environmental impact).

Ornamental horticulture products have an emotional and aesthetic value and are linked to health benefits and are not allowed to have any imperfections (damage) or contain any disease or pests when sold. 100 per cent organic is, therefore, still quite a challenge for the entire sector. It is therefore impossible to predict whether and when large-scale organic cultivation of ornamental plant products will take off.”

By the end of 2019, the area of cut flower, houseplant, bedding plant and cut foliage production worldwide was 745,000 ha (Source: AIPH Statistical Yearbook) of which an estimated 32,774 ha was MPS-ABC certified.

Headquartered in the Netherlands MPS is active/present in 52 countries. Worldwide over 3,750 growers participate in MPS-ABC (more than 5,000 production locations). In North America specifically, 56 participants are currently MPS-ABC certified.